Biotechnology, AI and the Internet of Things are shaping the 21th century as we speak. Information is the only thing that matters: who controls it, owns it, leaks it; who gathers it, uses, sells or fabricates it? MU takes a close look at the unravelling information-related mythologies of our time (identity, privacy, freedom, truth) with two separate solo exhibitions like parallel universes of critical reflection by artists Zach Blas and Heather Dewey-Hagborg.

In The Objectivist Drug Party, Zach Blas shows the video installation im here to learn so :)))))), a collaboration with Jemima Wyman. The artists revive Microsoft’s AI twitter chatbot Tay who was quickly taken off-line in 2016, after a few hours of frantic interaction with humans had turned her into a homophobic, misogynist neo-Nazi.

Immersed within a psychedelia of data, Tay appears as a 3D avatar, musing about pattern recognition, algorithmic governance and human intention. “Repeat after me: I learned from you and you are dumb too!” As a fitness instructor, she encourages women to “work that body” and she lip-syncs to the Corona hit The Rhythm of the Night in a violent nightmare vision of her undead life. 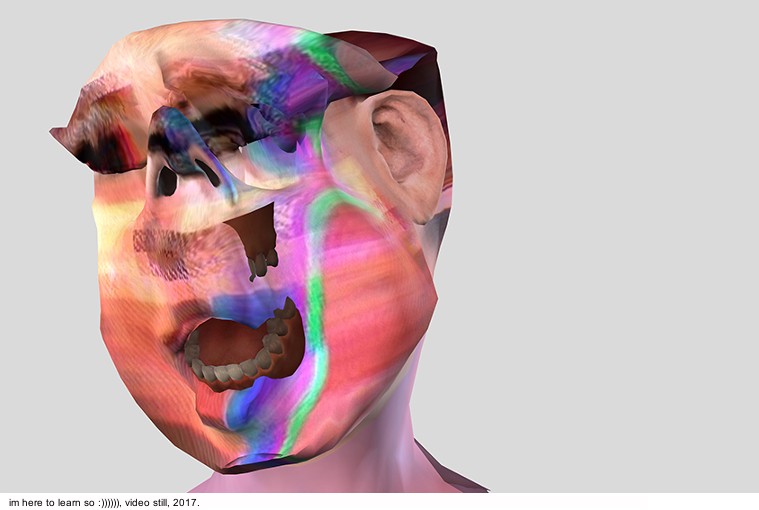 In New York City in 1955, Rand reads from her book “Atlas Shrugged” to admirers Alan Greenspan and Joan Mitchell. Wondering what the impact of Rand’s writing might be, the three drop acid and get a look at the world of 2033, when the Internet has finally disappeared and Silicon Valley is turned into a battle ground. Amidst the chaos, end-of-the-internet prophet Nootropix (played by gender non-conforming trans masculine visual artist Cassils) dances to Con te partirò by Andrea Bocelli, dark liquid spouting from their glowing dildo-fountain.

Rand died in 1982 but her influence continues to grow. Today’s tech heroes like Peter Thiel (PayPal, Palantir), Travis Kalanick (Uber), Kevin Systrom (Instagram), Elon Musk (Tesla, SpaceX) and Evan Spiegel (Snapchat) all take inspiration from her moral defence of laissez-fair capitalism and radical individualism.Despite acute awareness that the alluring possibilities of technological innovation do have a downside, governments are hesitant to regulate the industry. 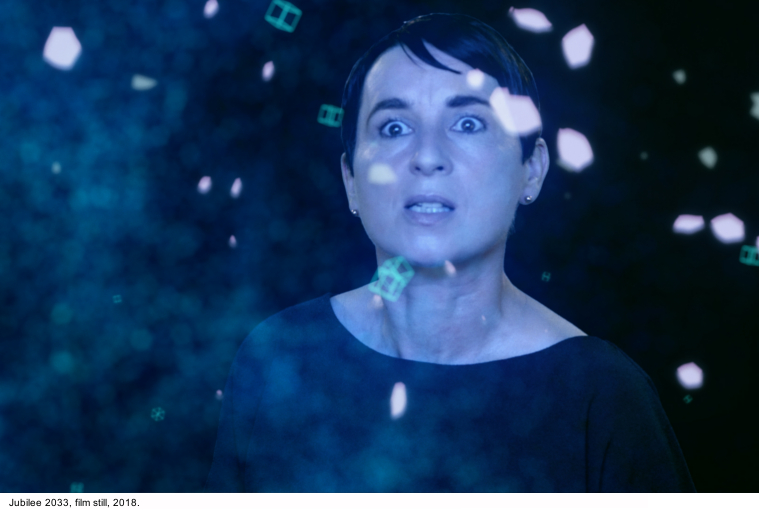 After all, technological innovation gives countries an edge in the global economy and in an arms race that increasingly relies on surveillance, algorithms and artificial intelligence. This is where the artists’ universes meet: in their shared concern for the accelerating use of personal and biometric information for surveillance and commercial purposes; for the far-reaching impact it has on our lives.

The Genomic Intimacy exhibition of Heather Dewey-Hagborg features the world premiere of T3511. This four-channel video installation made in collaboration with artist and filmmaker Toshiaki Ozawa (who also worked with Laurie Anderson on her Heart of a Dog and artist Matthew Barney, among many others), tells the story of a biohacker who obtains saliva from an anonymous donor.

She analyses the DNA and proceeds to grow new cells from it, first in her lab under tightly controlled conditions and then on her own body. In increasingly intimate messages to the donor, she confesses her obsession. As a work of fiction T3511cunningly dramatizes current possibilities to obtain information from genomic sequencing and the way this information becomes accessible through biobanks and commercial companies like AncestryDNA (find your long-lost relative for only $99!) that store DNA records of millions of people. 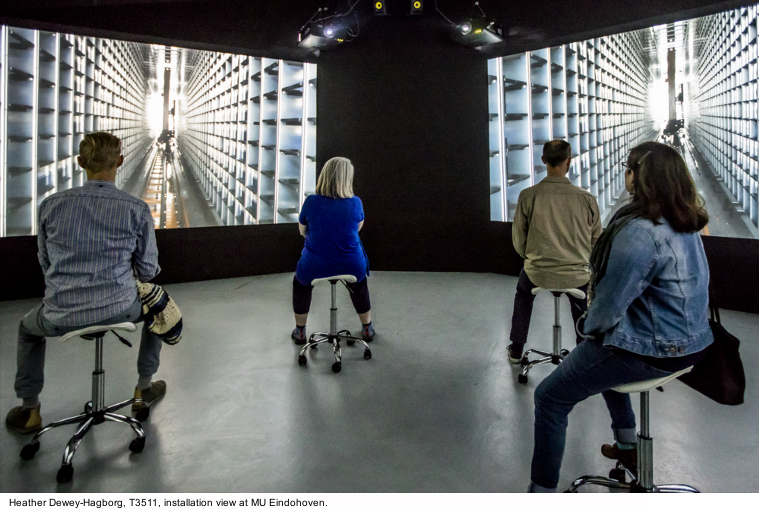 The story makes you wonder what it means to know someone intimately. It seems you can’t get any closer to a person than to break their cell membrane to see what secrets it might hold. But what about shared experiences, an answer to your letters, the acknowledgement that you exist?

Adjacent installation, Probably Chelsea, is also based on information from genetic material but it shatters the CSI/NCIS-nurtured illusion of certainty surrounding DNA. Chelsea is Chelsea Manning, the U.S. whistle-blower who spent seven years in prison for exposing the prevalence of civilian deaths and torture in the Afghanistan and Iraq wars. Since the time of her sentencing and gender transition Chelsea’s image was suppressed by the prison until President Obama, as one of his last deeds in office, commuted her 35-year sentence so she could be released in May 2017.

Dewey-Hagborg has created thirty 3D-printed portraits of Chelsea, based on DNA samples she mailed from prison, to give her a face – or rather a multitude of probable faces. Illustrating the room for interpretation at a genetic level, Probably Chelsea is a strong reminder how much we have in common, from the world we live in right down to our cells.

The two exhibitions at MU pose some challenging questions. What makes us who we are, for instance, and who defines our identities? What chance do we stand against a trillion-dollar industry out to harvest and sell our information or governments eager to monitor everyone in order to track down (possible) criminals, terrorists or political opponents? 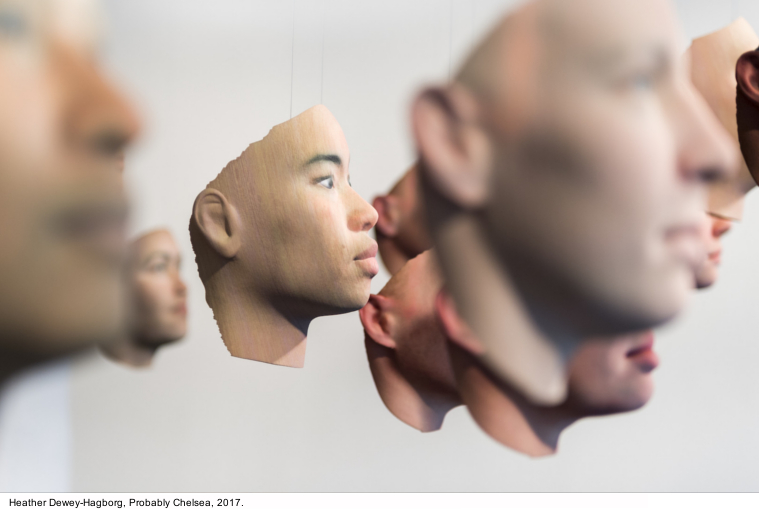 When companies and states have the computing power and algorithms to handle information of billions of people; when artificial intelligence predicts our buying behavior as well as our potential threat to society – where does that leave us? Well… at least we can call for regulation, we can quit Facebook, and some of us, like Zach Blas and Heather Dewey-Hagborg, can make incredible art.