The Redaction Trilogy is the first solo museum exhibition in Ireland by the collaborative practice of Kennedy Browne (Gareth Kennedy and Sarah Browne). For this exhibition the artists engage with Hugh Lane Gallery as a civic space in Dublin city, where Facebook, Google and other global tech corporations have chosen to locate their EMEA (European, Middle Eastern and African) headquarters. Their collaborative work poses timely and urgent questions around interactions between technology, ideology and politics in this context.

The exhibition looks to fictionalise the supposedly eternal narrative of neoliberal capitalism by working out its mythical qualities. As redactors the artists become editors who interlace writings from multiple sources into a single text, sometimes adding brief elements or pointing to similarities and inconsistencies between different accounts.

The Redaction Trilogy presents a trio of projects made using this distinctive process: How Capital Moves (2010); The Myth of the Many in the One (2012) and Real World Harm (2018). Each work involves a script performed by a single actor (or avatar), staged in a particular place and situation. An accompanying Disclaimer lays out these terms of engagement. 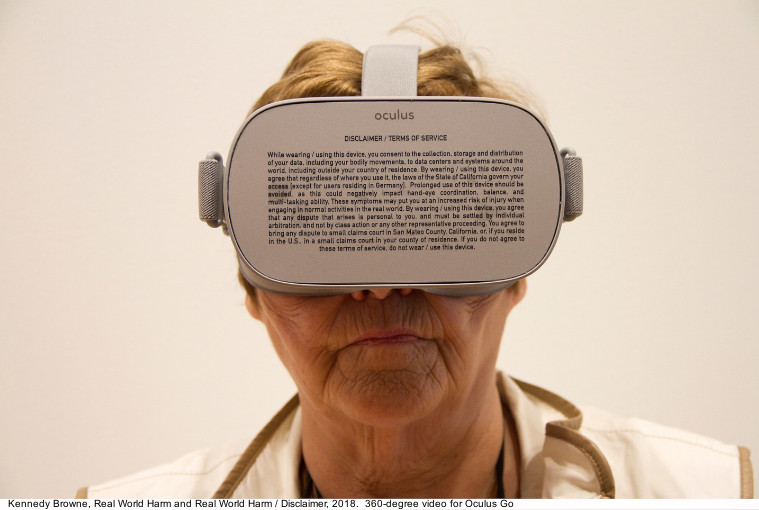 The most recent work in the exhibition, Real World Harm (2018), comprises a 360-degree video and a 5:1 surround audio installation, arranged around a large black vinyl floor-mat. In the video, viewed on an Oculus Go virtual reality headset owned by Facebook, a character called Glaucon guides visitors through an Irish midlands town, posing a thought experiment concerned with the interaction between online and offline worlds, asking if our actions would be moral if they could not be seen.

Eventually he leads viewers to the office of the Irish Data Protection Commission, which is responsible for upholding the fundamental rights individuals have to data privacy and access, under EU law. Through the audio we hear the voices of five former content moderators who were responsible for “keeping the community clean” by monitoring activities that online users may feel are invisible, or without consequences for others. Their individual voices come into conversation only in the gallery space as they never had the opportunity to meet in person.

Gathered around the black vinyl mat Kennedy Browne will also host a series of participatory events titled Digital Self Defence (2019); workshops, screenings, talks and demonstrations responding to the use and abuse of data by corporate or state actors.

Contributors include Ben Grosser, Cliona Harmey, Conor McGarrigle and Rachel O’Dwyer. A fully illustrated book accompanies the exhibition and includes the script and transcript of Real World Harm, substantial documentation of each work in the trilogy, and newly commissioned texts by Amy Powell and Jessica Foley. The book is available on site and online through Hugh Lane Gallery’s bookshop 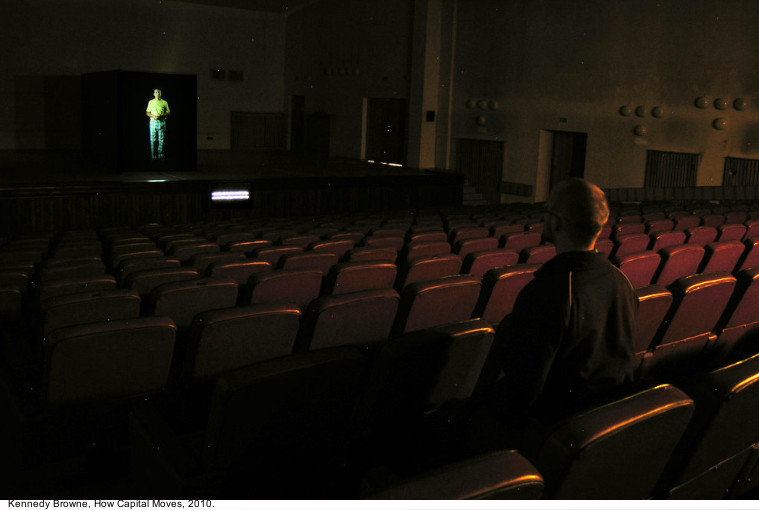 Kennedy Browne is the collaborative practice of artists Gareth Kennedy and Sarah Browne, based in Ireland, established in 2005. In 2018 they presented The Special Relationship at Krannert Art Museum at the University of Champaign-Urbana, a survey exhibition of their work produced together since 2009. Other solo exhibitions include The Myth of the Many in the One at Wilfried Lentz Gallery, Rotterdam and Crawford Gallery, Cork (2014); How Capital Moves, Limerick City Gallery of Art (2011) and 167, at Centre Culturel Irlandais, Paris and NCAD Gallery, Dublin (2010).

Kennedy Browne co-represented Ireland at the 53rd Venice Biennale, together with their respective solo practices. In 2020 they will complete a new commission for Aerial / Sparks, initiated by Louise Manifold as part of Galway 2020, European Capital of Culture.