Anatomy of an AI system

Anatomy of an AI is a study consists of two parts: a big map 2×5 meters, exposed at the Victoria-Albert Museum in London into the artificial intelligence area, and an essay available online and in free download. As the title states, the study aims to analyze in depth artificial intelligence, breaking it down and highlighting the link that exists with the real world, that of matter, production, work, exploitation.

The authors of the project are Kate Crawford, Distinguished Research Professor at New York University, Principal Researcher at Microsoft Research in New York and Visiting Professor at MIT Media Lab, who has been studying the large-scale social impacts of artificial intelligence and Vladan Joler, co-founder of the SHARE Foundation and professor at the New Media Department of the Academy of arts in Novi Sad. Joler too, through the Share Lab, has been studying digital in terms of work, exploitation, black boxes and other contemporary phenomena arising from the intersection of technology and society.

To understand the theme in depth, the two authors examine an icon of the AI, Amazon Echo: a black box, describable to most for its reactions, a small element of home technology, which responds to our requests in a simple way, immediate and natural, as told in the TV commercial. A black box shown up by the authors looking throught the machine that produced it, and, above all, its costs. A cost, measured in terms of exploitation and extraction of value, that all technology has always had, but increased with the advent of AI: the consumer also becomes a worker (unpaid), contributing to increase the learning of the own machine and also became product, analyzed and profiled in its interests and sold as a target. 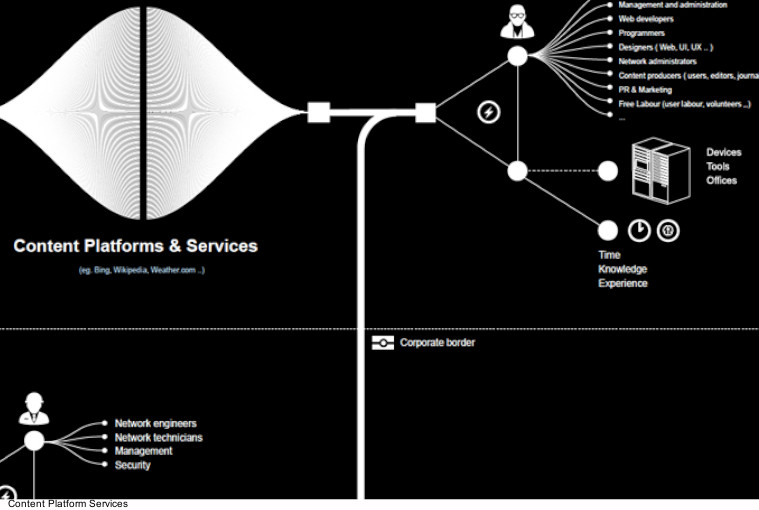 The theme of exploitation as a process of extraction, material and immaterial, is what guides the reading of the map, on levels, and acts as the guiding thread of the essay. The exploitation of material resources, such as lithium; human, like workers; intangible assets, like millions of data.

A connatural and extended extraction process: AI extracts value from every form of human activity, up to emotions and facial expressions, and the costs of all this are not calculated at all, unlike physical processes, where the quantifiable cost.

Anatomy of an AI is an important project, which opens up the topic of AI highlighting aspects far from the debate on its evolution and on the relationship with man and research. What emerges in this study is the analysis of a phenomenon, viewed not just like a technology, that enlight a new territory, poorly studied and understood, that reflects the very partial awareness of our presence, exposure and disposition to be “used” as a source of data and value by the new technology. Partial like the conscience that the industry has changed and the goods to which we attribute value are change: now we sell materials (immaterial) that did not exist until 6-7 years ago. 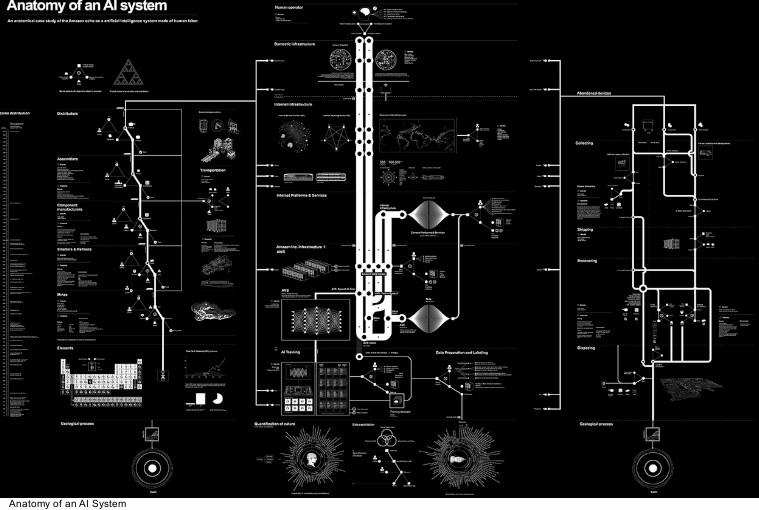 A new level of value exploitation that connects with the previous ones and materializes into a small accessory that holds together a vertical production and horizontal distribution chain. With this map Crawford and Joler help us not only to look inside him, but also around us.