Troyano: Critical Chile Near At The Future 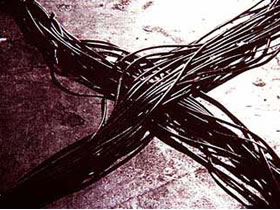 Troyano is a collective of independent Chilean artists from Santiago, which organizes the cultural activities relative to art and technology.

The collective participated at the VII Video and New Media Biennial (18-27 November 2005) critically attending the section dedicated to New Media and organizing an international symposium. Their project is called Elena in the honour of the virus which installs itself in a hard disk and erase its data. This project wants to give a critical picture of cultural, critical and artistic production which in the last ten years has been consciously relying on technologies.

They want to propose in the contemporary Chilean society a debate on the “creative” use of media in opposition to a purely economic, utilitarian and commercial vision of technology diffusion. Chile has been in close commercial relationships with Japan, Taiwan (and now China) for decades, it’s an important copper producer (the copper is a fundamental component to produce technology) and it has been always projected to a reliable and dynamic “modernity” (but also neo-free trader and reassuring for Western Countries) so the critical position of the Troyano group is an unfounded position.

But taking sides for a critical and social use of Media is a resolute and radical position to take in a Country which has just come out of the ten years Pinochet’s Dictatorship. A Country which is still guided from the same military dictatorship bureaucracy, it has spent the last ten years in a pitiless privatization of the social state (like Argentina ), and it has not legalized abortion yet (and it obtained divorce in 2004 only). In Chile contrasts and conflicts are still radical and they are often simplistically worked out in the dualism “Official nature” vs. ” militant revolutionary Pan Americanism”.

The interview of three of four components of this group (formed by Ignacio Nieto, Italo Tello, Ricardo Vega ed Alejando Albornoz) can be described as a collective reflection on the troyano’s experience at the Biennial.

L.C.: Why did you decide to participate as an artists’ collective by proposing an attending project?

Ignacio Nieto: It was an emergency: since now there were no New Media geography in Chile . Everything started at Rosario , Argentina , where we participated at a festival dedicated to new media. We became aware in our Country there were no specific interest in this subject. We participated at the Biennial as a collective to show some contemporary cultural practices related to new technologies.

Ricardo Vega: in this Country despite a huge electronic and digital instruments commercialization there are no awareness of the possibilities these new technologies offer. On the other side of the government idea of innovation and progress ( Chile is the Latin American state with the biggest number of internet connections, more than Mexico ) there’s reality: this country doesn’t produce technology, it just use it. What kind of dialogue can we have with technology if we just use it?

Italo Tello: In our Universities there are multimedia labs but we have not a great technological awareness. Nobody wants to know how a machine is built and developed, there’re no academic courses about it. In addition there are no New media local cultural referring. Students of art study Picasso and Duchamp, they are not interested in studying technologies because – unlike Argentina – artistic academic courses don’t gaze at Net Art, Hacking.

L.C.: Do you know something about last years international debate on these “new” artistic practices?

Italo Tello: Here in Chile artistic referents are mainly theorists and artists who worked during the 70s and the 80s.

Ricardo Vega: There are more skilled persons but they are “isles”. It’s difficult to incorporate and spread the theme of technologies in the contemporary art debate and its critics. I’d like to underline also our interest goes beyond art: I’m a designer but I’m interested in these practices, in these new hermeneutic models and communicative paradigms in the society. At collective level not only at the individual level.

Lucrezia Cippitelli: you said Chile is investing a lot of money in technology. Some stops of the Santiago ‘s subway have a Wi-Fi free internet access (not even Paris have it). You also have a New Media Biennial which has come at its 7 th edition (14 years of activity!). So what’s the matter?

Italo Tello: There’s no will to go beyond consumption. As a collective we’d like to show that even the least economic investment, if it’s a logical investment and you really want to communicate something, can make incredible things happen.

Ricardo Vega: We are Latin America ‘s pioneers as regards connectivity but we don’t know how to use it. The New Media Biennial is an example of this. It has been a Video Biennial since last year and even now it remains a kermis dedicated to video. There’s no adequate content on the container. The official infrastructure proposes a technological improvement without substance, it’s just a commercial method to advertise the idea of a “developed” and “advanced” Chile it doesn’t exist.

Lucrezia Cippitelli: …and even “democratic” and “trustworthy”

Ricardo Vega: …and on the other side there’s the society that doesn’t take advantage of this “development”.

Ignacio Nieto: People want to buy the super expensive last mobile model and then they don’t know how to use it. It’s just a status. Historically Chile has developed an important avant-garde musical production. Electro acoustic music in Chile has a fifty year history . It’s a circuit which is very close to technology production and engineering studies but it’s a very exclusive circuit: pioneers of these experimentations built up themselves the machines they work at. Computers with a 7kb memory

Italo Tello: As Ignacio was saying here if you visit a very poor house in a very humble area you’ll find they have a huge TV or the last mobile model. The problem is they doesn’t use it as a means of expression and critic of the system. Chile is divided into two parts. There’s a Chile that has developed a critical and expressive language deriving from Pinochet’s dictatorship and they resort to the aesthetics of barricades, to the themes of contra-culture , desaparecidos , politic and suburb. On the other side there’s a generation who’s grown up with Mtv, Nintendo and videogames.

Lucrezia Cippitelli: Is there a Hacker community?

Ignacio Nieto: It’s not easy to give a definition of New Media. I find this name very commercial, a melting-pot od different practices.

Italo Tello: It’s a standard term, it’s wrong to connect it with computer only. Every epoch has its new media, it’s not correct to give this term a strict significance.

Lucrezia Cippitelli: Why did you chose to present yourself as a collective? Where does the idea of a virus come from? How did you chose artists?

Italo Tello: At the Biennial we attended at everything concerning New Media. We wrote a summon and we divided it into three themes: Net Art, Software Art, Tactical Media. We also included some experiences that are working with new technologies from a social point of view. For instance the pirate television channel Señal 3 that broadcasts from its quarter la Victoria or the Software Libre Association.

Ignacio Nieto: As a collective we worked as archivists. At this moment a critical work on new media would be too pretentious and complicated. As regards virus, virus is a code entering a computer. We found its name in the McAfee archive of virus definition: there were funnier names but we chose “Elena” because it fitted our collective name Troyano and Elena of Troy. The characteristic of Elena’s virus is it installs itself on the hard-disk of a computer erasing all its data. We wanted to install ourselves in the Biennial erasing its presupposes and re-writing a new story of it.

Lucrezia Cippitelli: I think the mostr interesting aspect of this experience is the building up of a network among persons who had the possibility to present their works, met and share their ideas, skills and resources in a very less academic way. How are you developing in the future the work you started with this project?

Ignacio Nieto: First of all we got to put the editorial material we developed during conferences online.

Italo Tello: We have to capitalize everything we said and heard and record it in a catalogue or a DVD which will become the missing New Media local referring.

Lucrezia Cippitelli: What are in your opinion the best results of Elena’s project?

Ricardo Vega: The existence of a practice, a way of acting shared among persons with completely different origins. We know we use instruments which aren’t stable yet but now we know we can work together. I also think the hard-disk re-writing was positive.

Lucrezia Cippitelli: I think the Elena’s project had the positive effect to connect  at both local and international level  music, free software, activism and cultural critics.

Italo Tello: Someone said we’re pretentious and too elitists, that our proposals can’t get a wider audience. Now I can say we showed it’s not true.

Lucrezia Cippitelli: In your opinion are New Media are an important communication and expression possibility and potentiality for the so-called developmental Countries?

Ricardo Vega: We only talked about very elitist practices in the ecosystem of a Southern Country. I’d be very interested in analysing the possibilities beyond “media centrism” elitism.

Italo Tello: The access theme is central. I work at a public school at a very suburban area of Santiago , a very poor and problematic area and I teach music to children. A national project realized the set up of multimedia labs: dozens of computers connected to internet. I realized that the teacher who has to form the children is regularly outclassed by the children. They are incredible.

Ricardo Vega: …in a Country where there are the Wi Fi in the subway and the New Media Biennial.

Ignacio Nieto: Here’s a metaphor on Chile : at the Biennial they installed on fake raw wood tables a very scenographical series of Sony Vaio Laptops. This area was called Media Lunch. Here computer were chained to tables and personal computers didn’t have internet connection. In a Biennial dedicated to New Media.