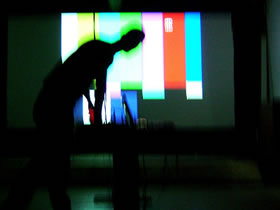 In Italy , more than anywhere else, the cultural life of experimentation is related to political underground through a system that developed from the 60’s. Social Centers and Squat have been locations of the (electronic and not) experimentation of the 90’s, with alternate fortune.

Anyway, Italy is living one of the strangest moments of the relation between experimentation, public and activism. Political realities slowly entered in a phase of flow after the repression of Genoa 2001, without precedents. There’s a return to the private and uncritical dimension of the leisure; new generations aren’t interested in taking over their elder sisters/brothers in managing places. By the way, something is moving under the ground. Rome, Milan, Naples, Bologna, Turin. Every metropolis developed different experimental scenes whose dynamics are difficult to map. I do know that during the last four years I had the biggest feed of non-orthodox life music. And that the principle table where I eat was TroK!, Cascina Torchiera Senz’acqua, Milan . It’s born in September 2004.

This whole was to pursue the goals to (from their manifesto):

1 – Contamination between the activities of an occupied social center and the development modalities of a musical scene that doesn’t mind about the “political” sense of its existence.

2 – Diffusion of alternative music to demythologize and eliminate their status of difficult and tough subject.

3 – Valorize the reality of the independent Italian music.

After TroK! experience, JointSventure developed its activity, who toured around free spaces: the ARCI Blob of Arcore, the CSA Baraonda of Segrate, the CSOA Garibaldi, the Dauntaun Space at CS Leonkavallo, the ARCI Scighera, the Scalo 10 and the Soundmetak in Milan . So, after this entire prologue, I’ll share my little chat with cauz. on Trok! history.

Bertram Niessen: Can you tell us something about how, when, where and why TroK! was born?

Cauz.: It was born in 2004. I’ve already been “in Torchiera” since 6-7 years and during the last months of stagnancy inside, not only Torchiera, but also the entire city of Milan, I decided to try again with live music in Torchiera. I was convinced it was the right choice, because of the beautiful space (most of all the open one), because of the musical scene in Milan , rich in sounds but poor in spaces. During the autumn/winter we started an activity of live concerts in collaboration with some post-rock and free groups the test was loved by the public, although my desire was to create a better coordination, a project that involved organizers, guests and groups following a common idea.

The start-up arrived at the beginning of summer. While I was trying to involve more groups from Milan for an outdoor festival, I met Bron y Aur, free rock group that I deeply appreciated, who was proposing for a similar idea, who also gave me all their contacts collected during years of concerts all around Italy . The first festival was held in September and called “TroK!  torchiera rock showcase“, but was suddenly modified in “exhibition of free rock” as groups of strong experimental area immediately took part to the festival (OVO, X.Iriondo e P.Cantu’, Jealousy Party…). The excellent results obtained by the festival, big public and strong satisfaction for all the subjects involved, first of all for the groups, have been the final stimulation to start with a fix program, who lines up a concert (or two) per months and a two-days festival in September every year.

Bertram Niessen: Which is the relation with Torchiera?

Cauz.: The relation is for sure a close one. TroK! was born in Torchiera and lives thanks to a choice of total auto-managing able to involve not only the organizers, but also all the subjects who sustained the project. It’s not so strange to see musicians building the entire stage of the TroK!. Activists, men and (most of all) women, of the Torchiera represent the most important part of the festival, as they contributed to welcome the guests, cooking incomparable dinners and preparing and managing the space during the shows. .

Bertram Niessen: Italy has an extremely articulated scene of musical experimentations: Soundmetak, Scatole Sonore, Tagofest and many others. Could you draw a map? How does “TroK!” enter this?

Cauz.: Well, part of the experiences you told about happen in different Italian situations, and I do not know them enough to talk about their characters. There surely is a common point to all these different settings, even if in the end they are deeply dissimilar. For example Soundmetak, that you mentioned, is an instruments shop, who consolidated a festival of experimental sets in the middle of the “Milan happy hour” thanks to its owner (X.Irionido), with lots of spectators attracted by full bars and high decibels. Basically, a different proposal by the standard concert on TroK! stages, even if near in spirit. Often, Soundmetak musicians play the same night at TroK!, with different sets.

The common data is surely the vitality of the “underground scene” in Italy that I specifically keep on putting between double quotes because the term is vague and may be presume a strength that it does not have yet. It doesn’t mean anyway that productions are not high leveled, even if they do not have any kind of response by the mainstream labels.

Bertram Niessen: “Free music in free places”. Which is the relation between experimentation and activism?

Cauz.: As I state before, TroK! couldn’t exist in a different space, in the sense of “free space” and Torchiera as well. Torchiera have always distinguished itself for its attitude to experimentation. Social centers and associationism worlds are living a strong refluence; a long wave that started with the Genoa G8 and that is surfacing not only in political-social ambits, but also in the cultural ones. Notwithstanding it keeps on being an ambience that better come close to artistic experimentation (most of all in Milan ) and where unusual proposals still find an open microphone at their disposal.

The economical aspect seems not to be worthy, but it has a strong influence. Social spaces have costs and that kind of realities doesn’t have lot of money; they often try to lower the expenses. It has habitually been an obstacle in proposing less conventional artistic offers.

We periodically face this problem (choosing to keep low prices), but we luckily always solved it. We have a consolidate public and a net of relation that includes aficionados disposed to cut their cachet when playing in Torchiera. Till the point of the TroK!party (“the fair of the bloody ear”), events organized to fund Torchiera, where groups play free of charge. The first one was coordinated two years ago and probably the next one will be in June.

Bertram Niessen: Generally underground Italian environments are a little bit tired, due to repression, historical joints and lack of generational change. Do you feel you’re tired too?

Cauz.: I think I already answered before, but I make use of this lines to tell about the “missing part” of this history, that is the JointSventure. There truly is a crisis, for us as well. Torchiera has always had a generational change from time to time, but it’s clear every year we changed less and less, because of the difficulties you talked about, but also because social centers are no more the places of strong political and cultural production they were a decade ago.

JointSventure is an attempt to answer this exhaustion, that didn’t totally achieve its goal. The idea was to coordinate Torchiera and some other similar places inside the metropolis that follow the same musical situation, trying to accept all the dates requested by a huge number of bands. So we said: “let’s stop struggle each other over shows and let’s try to share all the requests, in the sense that, when a space is not available, some other could be”. The project quickly evolved in a common program that involved 6-7 spaces for a couple of years, social centers, associations and even shops, as in the case of the already mentioned Soundmetak. Obviously this experience dealt with general criticalness of underground and there have been economical and managing problems that stopped or dilated the programs in some of those spaces. We now still have 2 or 3 situations. However, it doesn’t mean JointSventure didn’t bring new life to those spaces in crisis. This experience saw “non-political people” (I’m sorry for the double quotes again) open and close centers, sell tickets for or drinks during the concerts they contributed to organize. It is not a way to overcome the crisis, but surely an idea to keep going on.

Bertram Niessen: Have you got a “managing line”? How do you choose who you invite?

Cauz.: I luckily have a work that allows me to listen to lots of music during office hours. Otherwise I should waste my spare time to pay attention to all the requests we receive every day. 20/30 groups per month contact us, while we monthly have the possibility to host 3/4 groups. Some of the mails are sent to some other interested spaces, but the majority has no chance.

Therefore, we were free to invite groups only during the first months. TroK! is now an appointment that walks with its own legs and lots of people see it as an opportunity to exhibit. It is what I mostly appreciate, I’d say. We choose groups following our taste; because of all the requests we decided to satisfy ourselves inviting groups we enjoy the most, paying particular attention in not being repetitive and trying to give space to those who do not have space anywhere else.

September festival is a different case. We do invite our choices because of a bigger program, calling people we want to play during our festival. The festival or TroK!party are situations where we overcome the “simple” concert, inserting some installations, performances or even dance shows in the program, as in the 2006 edition. Global contamination; that is the main ingredient of TroK! receipe.