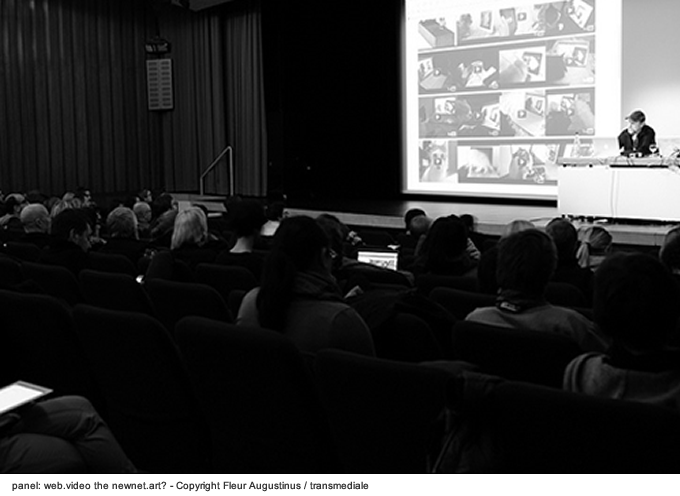 The net art (known as new form of art), which is produced by the help of technological developments, was one of the topic of the panel “web.video the new net art?”

Moderator Robert Sakrowski (de) was the first speaker who started to the speech. Sakrowski was explanining in his speech the closely connection between net art and history of transmediale festival, and the transition of video festival into the media festival. Sakrowski explained that the video festival was founded at 1986, a side-project of the Berlinale’s ‘International Forum of New Cinema’, to provide to video art to its own platform, which was 21 years after the beginning of the video art.

The distinction between video and film let to the separation of these two festivals and consequently to the political, economic and social separation of film and video. In 1997 the video festival became transmediale: the continuously changing self-definition of the festival main focus on artistic avant-garde media, can be expressed in the short form from film to video, television, Internet, software.

The subject of the panel has the form of question: is the web video the new art? The art history focus its attention to video art, net art and web video, in order to put the web video in a relation to net art. Because Net Art is not dead and its useful to attract attention, and kind of certain position, to domain of the art business.

So within Sakrowski’s informations, Youtube is used as a stage gallery by many net artists to show their independent art works, to get feedbacks and to reach wider audiences. And Youtube enables artists to leave the boundaries and to use the media how he/she would like to use.

About the relationship between net art and the video art, the keywords for Robert Sakrowski were: mass distribution, technological mass productions and time-based performances. Most of the net productions are based on motion images and web video depends on technology, and easily can be distributed on video sites as Youtube. Especially these technologies, which are easier to control, also keep costs low. Sakrowski also mentioned about the importance of copyright on net and asked a question: who is the owner of the productions today and who does control the conditions? Addressing multi national sites Google and Facebook. 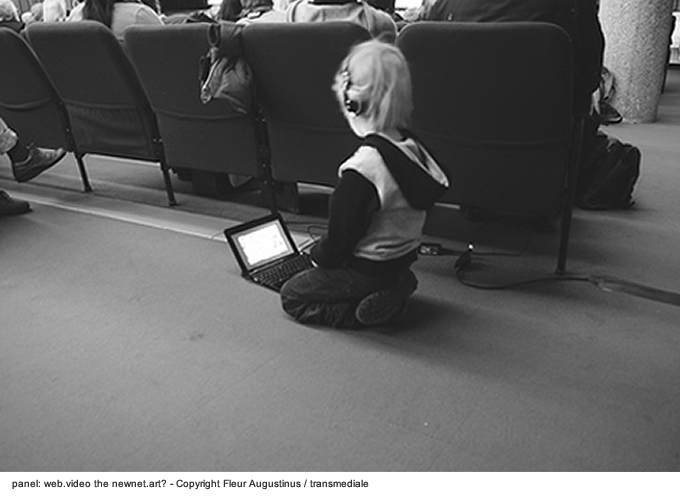 Multimedia artist Constant Dullaart, the first speaker of the panel, focuses his attention on visualizing Internet grammar and software dialects by editing online forms of presentations and by re-contextualizing “found” material, creating installations, performances, video, web sites, prints and blog postings. He started his talk by showing one of his art works: he just mentioned that his only aim is to create confusion and practices by finding different ways to animate the user interface design of the company Google on Internet by revolving (http://therevolvinginternet.com/), shaking (http://theagreeinginternet.com/) and re-shaping (http://theagreeinginternet.com/), spreading (http://internetspread.com/). After these works, Dullart also mentioned how he finds Youtube design ugly. So he uses Youtube as a subject to re-design

(http://www.constantdullaart.com/site/html/new/youtubeasasubject.html), and to get responses from people (http://www.tvchannel.tv/dullaartresponses.html). His YouTube As A Sculpture work also brings a new perspective to Youtube’s loading button (http://www.todayandtomorrow.net/2009/12/04/youtube-as-a-sculpture/).

Second speaker, Internet artist Petra Cortright, uses webcam for her artistic productions. She started her talk by talking about her childhood years. She said that she started using computer when she was ten, and she became addicted to instant graphics. Cortright uses webcam herself to produce art works, because she feels comfortable in front of the web cam and because its quality is low and she does not want to be seen by other people completely. As an artist, she thinks looking at the screen and see what she is doing is amazing. She can upload and control it whenever she wants. She likes using effects, which are done by other software programmers, in a different way.

The panel’s third speaker, Multimedia artist Igor Stromajer, started showing his first project, done for transmediale 1999 and continued showing his projects year by year, to explain what he is still exploring, looking and searching for. I guess the shocking point was his decision on deleting his 37 projects (1996-2007), which were consisted of 288 files and all were just 100mb (http://intima.wordpress.com/2012/02/10/make-love-not-art/#more-2796). He also introduced his project Ballettikka Internettikka (http://www.intima.org/bi/index.html). 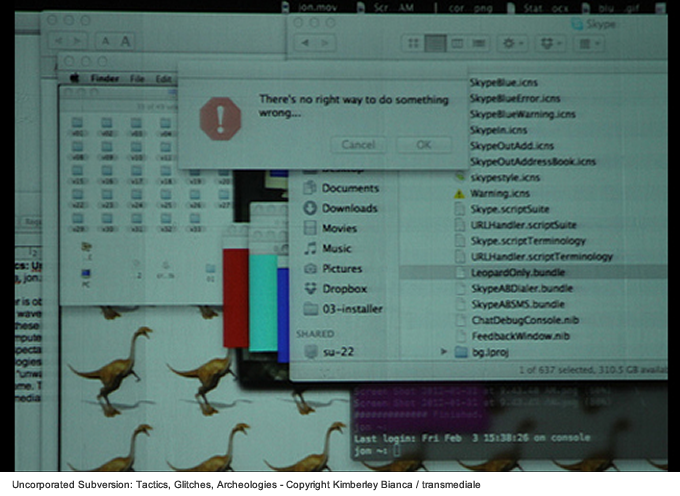 The moderator Rosa Menkman, a visual artist who focuses on visual artifacts created by accidents in digital media, opened the “In/compatible aesthetics symposium” by introducing herself and her artistic and academic research on “Glitch”: an unexpected occurrence, unintended result, a break or disruption in a system, which cannot be singularly codified.

Michael Dieter, a lecturer in New Media at University of Amsterdam, focuses his research on art, media, ecology and politics. He talked about “modification” by giving examples of different types of art works, from Rosa Menkman The Collapse of PAL (2010), which tells the story of the PAL signal and its termination. He spoke also about Jeff Donaldson, NES System2/Leo Deck (2006), which creates animations with his own hardware modifications. And also Paul B. Davis, Five in One, Fantasy Cutscenes (2007), which is an animation of Super Mario Bros: a videogame modification using “cutscenes” from some other video games.

Dieter also touched on “Glitch Theory” and Glitch Studies Manifesto: “Speak Glitchspeak (opposing “Newspeak”: Orwell, 1984) is not just a new form, but an exoskeleton of progress. A new generative form. “Glitch theory” is what you can just get away with”. While his speech, he built a sentence: “Glitch Art is about problems, not solutions.” So, the keywords for “glitch” are; manipulation, crack, disintegration, rupture, bend, break. All these key words generate problems and any medium towards these points, becomes something new. 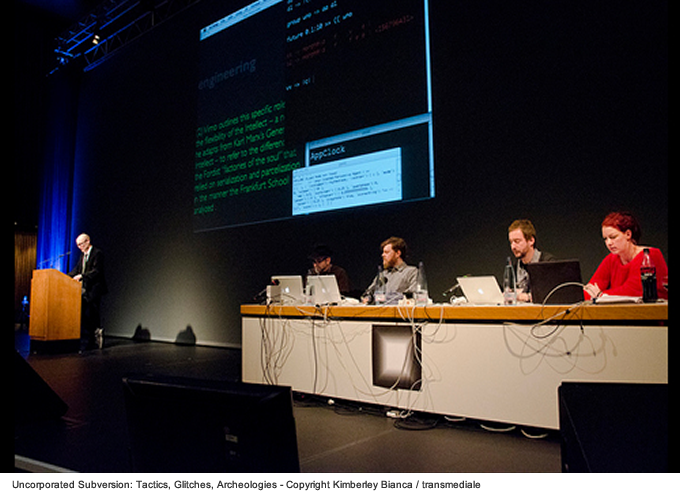 Jussi Parikka, a media theorist, and Julio D’Escrivan, composer/performer, presented on cognitive capitalism, through live coding performance. The aim of the presentation was to investigate the forms of collaboration between code, sonic arts, and media theory towards media archaeology of cognitive capitalism. Parikka touched on some of the issues, like the need of laboratory, media, capital and military understandings of the cerebral and affective in two ways.

First, aesthetic practices, scientific laboratories and media technologies work together to reveal the attention of political economy, as a part of urban capitalism. Secondly, concept “cognitive” work, with its connections in science and technology, can be easily understood with media. As an audience, it was good to get the informations first in a framework of media theory and than to observe them with a live performance in a framework of practice. Theory and practice supported each other during the presentation. It created an audio-visual performance in consideration of media theory.

Jon Satrom, dirty-new-media artist, likes breaking things, learning and searching for the unique blips inherent to the systems he explores and exploits. During his work presentations, he put into words that he likes pulling stuffs out of applications, instead of searching images on Google, using them in a different way to create colorful glitch-wares. He thinks that when something fails, it glitches well. During his live show, he crated different types of glitches with his desktop. One of his ideas was: “Computers, despite what people think, are pretty dumb. It is humans that make them look clever.” Based on this sentence, practitioners have to employ creative problem creation skills. 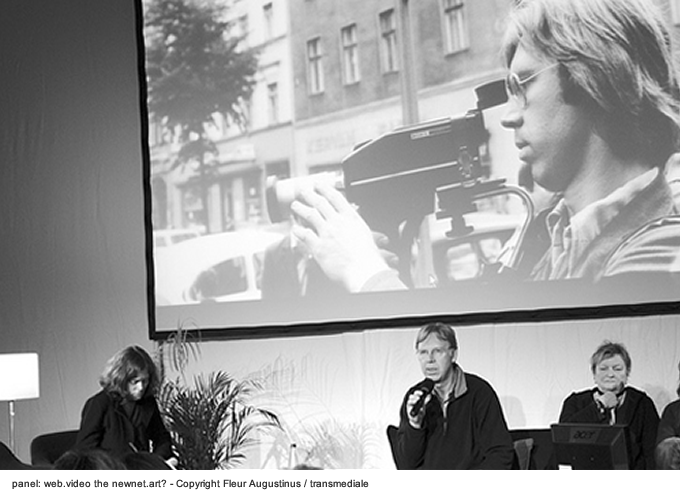 The theme of this discussionfocused on the historical distribution strategies of networking, and also collaboration of counter-publics, media collectives, net cultures etc. This panel also tried to create a critical look from 1980s and 90s within video and net, and related this to the current production of counter-cultures in consideration of the fields of political, artistic, individual and collective practices.

Florian Wüst, a visual artist, independent film curator and the moderator of the open discussion, underlined some issues according to the speakers’ discussion topics: the home recording systems and the process of copying in digital culture, which are different than the television system. These changes generate differences in consumer markets and creating art works, in the relation between video art and video political art to shape the media reality, and net criticism.

Kathy Rae Huffman, a freelance curator, said that TV was, during those years, the main aim for most artists and many art pieces were on television. Especially the intersection of art and feminist revolution focused on representation, femininity, modernity, psychoanalysis. Kathy Rae Huffman showed also some artworks done by different female artists, like Dera Birnbaum 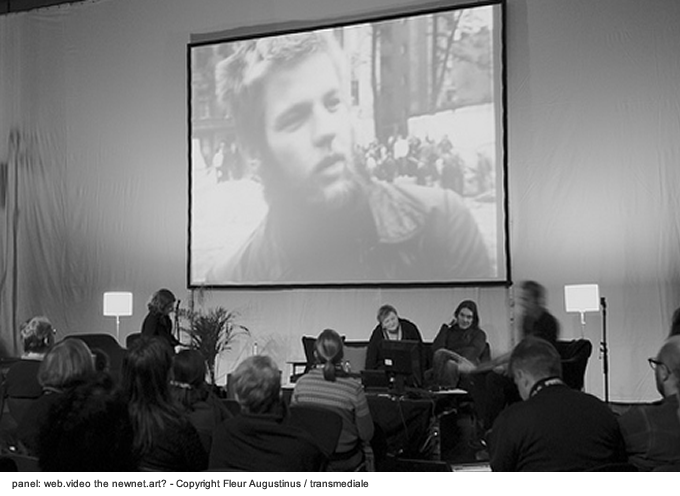 The other speaker Eckart Lottman, a film maker and researcher, touched on the situation of West Berlin in the means of technology and society. He gave a little information about the foundation of Medien Operative (1977), an alternative media center in West Berlin. In 70s, there were few TV channels and videos were available to create with public contents. Now, the question in this age is: “what kinds of videos are being made?”

Pit Schultz, artist and net activist, mentioned the interdisciplinary set up and relationship between broadcasting and internet. He gave Z A P P (http://www.park.nl/catalog/1showrec.php3?record=36) as an example for video clips from 1991 to today, under the categories such as nature, humor, documentary etc. During his speech he said that: “In media culture, net is our new TV and net culture is a popular culture.” So, he claimed that art can not be online.

In discussion part, a critical debate happened between artists and Schultz about media art is still political or not. Schultz claimed that Anonymous is a political actor in the net culture, but a failure of media artists. “Video Artists Unite” ended with video of Youtube delivers YOU (http://www.youtube.com/watch?v=ZTlYJ8EWMgo&feature=youtube_gdata_player). 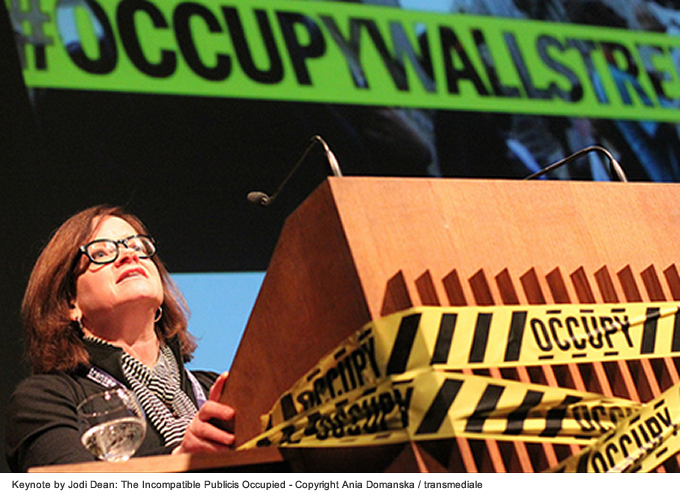 The Incompatible Public is Occupied

Jodi Dean talked about “the form of activism and the society resistance”, by giving examples from different cultures and countries, concerning the technology and current social crises. One of the examples was “Occupy Wall Street”, the protest movement about social and economic inequality, located in New York City’s Wall Street. During the presentations, we witnessed the visuals, which show peoples’ reactions to the government by holding posters like: “Capitalism is the system that creates the 1%”. Other examples were “Black Friday sales” and “Stevens concert tickets” protests, during which people camped for them to show their reactions.

During the presentation, Jodi Dean said that: “Occupy is not over and hasn’t peaked, it is a winter for reflection”. So, the protest is not the end but a means to reach an end and imagine reverse privatization that would be collectivization. Dean said: “Make water and education a functioning common.” At the end of the symposium audiences and Dean discussed about anarchism, communism and occupation.