Notes On Transmediale 2011: Hack:ability And Identity 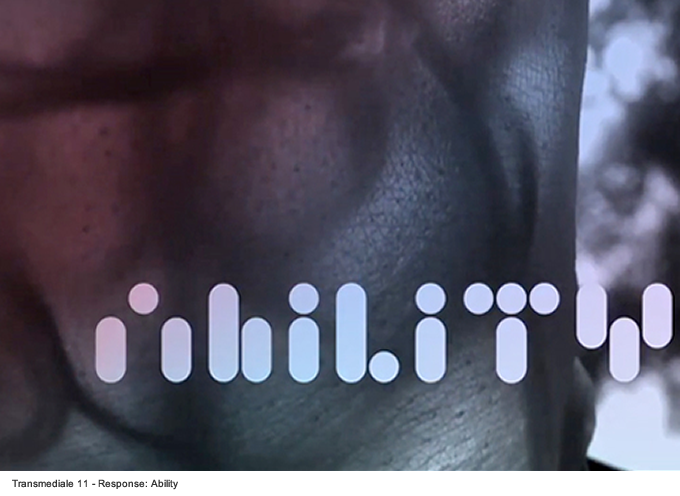 In its 2011 edition, Transmediale Response:Ability has dealt with the political implications generated by the technological evolution in progress and with the skills which the hypermedial and overconnected subjectivity should acquire in order to face the new challenges urgently posed by reality.

Transmediale 11 is an event about the formation of citizens-users who are able to take advantage of the opportunities which the web and the digital tools provide to the creation of real and virtual, individual and collective identities. Identities able to set up new proposals of political participation, starting from the reappropriation of information and public spaces, also through the setting up of online micro-communities, as it happens in the Open Zone and Hacka Way sections of the festival, where it is worth to mention Thimbl, a new open source tool for microblogging, “if you’re weary of corporations hijacking your updates to make money”, as it somewhat happens on Facebook. 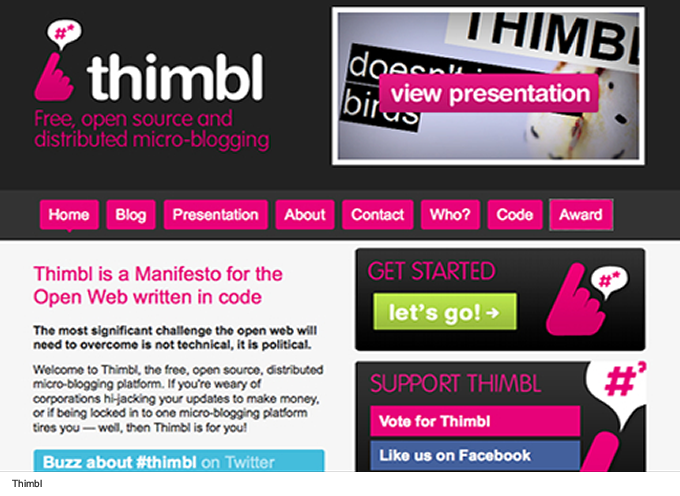 We get the impression that the theme of identity is one of the festival’s cornerstones: identity as a process, rather than definition, substantia, essence. Identity as a process of subjectivation, relation and configuration in the context of economic production, which by now coincides with the production of the subject per se. Some of these themes were mentioned in the lecture “Body:Response. Life at work”, with Franco Berardi Bifo and Maurizio Lazzarato, inspired by Foucault’s and Deleuze-Guattari’s works.

Other themes, like the redefinition of public space in relation to private space – of which Wikileaks is the epiphenomenon and the totemic trace – emerged through the lecture “Digital liveness – Realtime, desire, sociability”. The paradox of an over-mediated and immediate world spatializes itself as a bio-mediated agorà (for which the principles of persistence, serchability, replicability and invisible audience apply), and at the same time as a virtual pre-mediated agorà (typical of real space prior to digital revolution, as in chat roulette.

Transmediale 11 seems to suggest that the next political battles will necessarily have to be fought between the web’s virtual world and its surrounding real world. Cyberspace (W. Gibson, Burning Chrome, Neuromancer) tends to biologyze the binary mechanicalism of computer numerization, integrating the bìos in the web’s incorporeal technè, and bringing near neutral and measurable matter to chair (flesh). 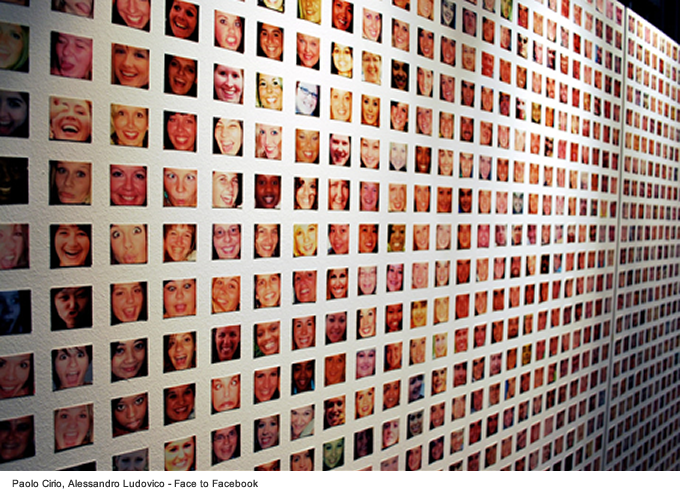 Standing upon these critical points the performative, emerging, and multi-authorial publication Cos, by Salvatore Iaconnesi and Penelope.di.Pixel, tries to decipher the users’ online emotional state through the linguistic-chromatic mapping of their moods. Leaving space to a partecipant’s (rap)presentation of a feeling through recording an audio track or a video, Cos creates a virtual place made of “overlapped multiple sources, asynchronous temporal scales, intertwined time frames that loose linearity for the benefit of the concept of network”, in which the “subconscious becomes predominant, and linearity and harmony leave space to noise, deconstruction, emergency and ubiquity. Overlapped multiple realities, which, even while denying each other, form a surfable, filterable, mixable, shareable neo-reality”

At the same time, the subject’s transformation into a machine proceeds through ever more complex biotracking technologies, indexing his behaviours according to statistic models typical of digitalized biopolitics. Focusing on these themes was the performing lecture “Gathering 1: event, agency, and program” by Jordan Crandall – awarded with the Vilém Flusser Award. The approach of this work closely echoes the concept of atmospheric media (expanded media, not objectual) proposed by Mark Hansen during the lecture “Delimination of life”.

The digital anthropophagy lecture by Vanessa Ramoz – who received an honorable mention at the Vilém Flusser Award – further seems to be crystallizing itself into the (hetero)genesis of a virtual incorporeal boden. 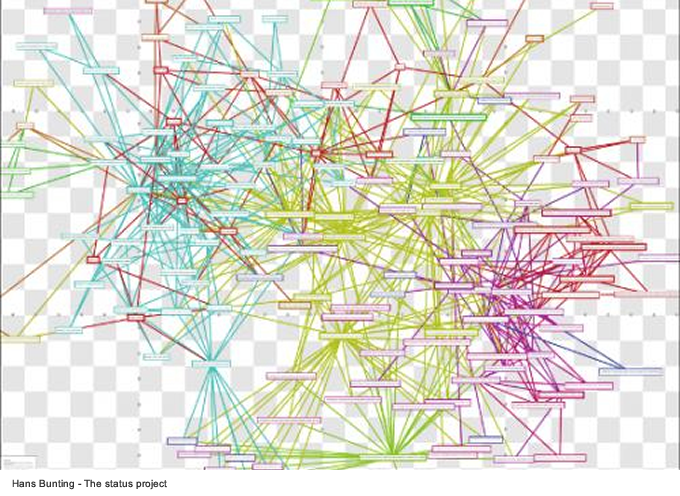 The awareness of the subjectivation processes implemented by contemporary society on the individual is at the core of Heath Bunting’s work-in-progress, The Status Project.

Once again, the cataloging-megalomaniac and metaphysical-reductionist fault for which it is possible to sum up identity in a series of tidy algorithm formulas (the idea at the base of the effort to create economic values starting from every aspect of subjectivity), is here diverted. The Status Project shows the linguistic discretization of identities through a computer syntactic structure in which the “code” becomes a performative utterance (cf. J. L. Austin, How to Do Things With Words‎). Heath Bunting maps the existing processes of bureucratic subjectivation as they are in a Kafkaesque society, and shows that identity is hackerable, but as well sellable. 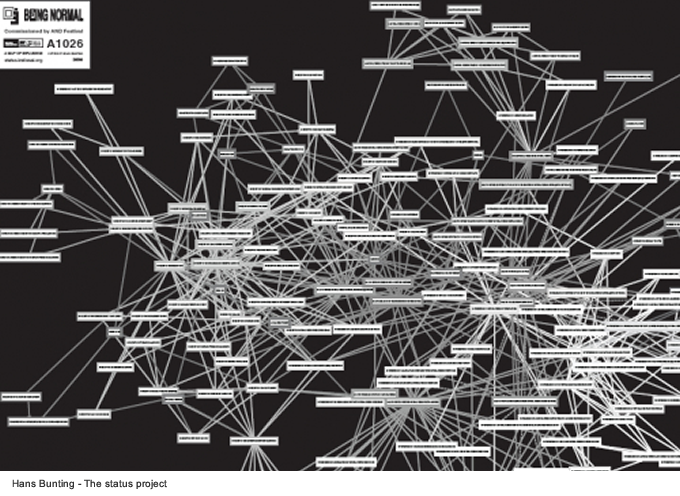 Infographics as a tool inbetween the linguistic and the perceptive (Heath Bunting’s maps are so dense and complex that they are almost unusable on the computer screen, and require, neverhteless, a lot of time to be decoded on hard copy) add one more element to the complex glitching imaginary which the operation gently drags into the utopian transparency of the code. Artivism, precisely, also through the creation of an anonymous mailbox.

If in The Status Project the identities are named (or, better, re-encoded) on the network to prepare their reappearance in the real world, the syntactic structure of the détournement (misappropriation, diversion) carried out by Face to Facebook by Paolo Ciro and Alessandro Ludovico, is wholly internal to the network: artists steal a million faces and names from Facebook and create http://www.lovely-faces.com/, dating website which, through a face recognition software, categorizes men and women by determining their facial expressions. Once again, at the core of the debate is the alleged legality of Facebook seizing its users’ data: act which is openly replicated by the artists to show the intrinsic violence of the majors towards their users.

The semantic of action lies, though, in the real world, in the reactions of the concerned users. In the virtuous circuit which an act of online hacking instils in the offline consciences, as it already happened for their two previous projects, one directed against Google, the other against Amazon. 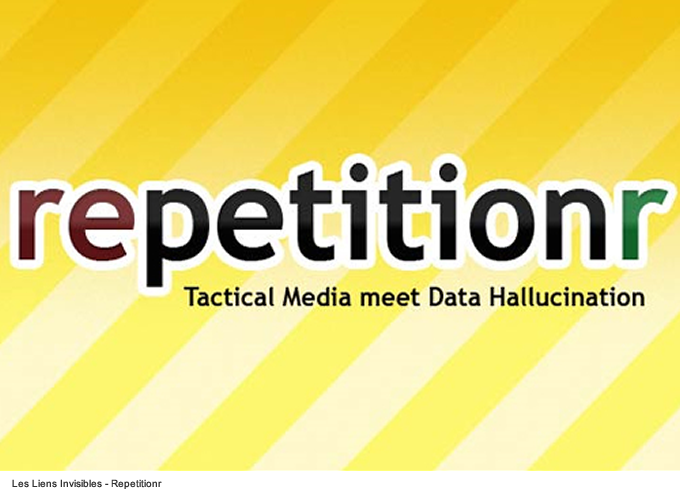 Among artivism projects directed to Facebook and linked to the complex notion of disseminated and virtualized identity, we cannot leave behind Seppukoo by Les Liens invisibles, which received an honorable mention at the Transmediale Awards. In this case too, the personal dimension of suicide is claimed as a public and collective act to be shared, just like a virus to be transmitted: the logic of empathic crowdsourcing proposed by Facebook (connection = friendship) is overturned (disconnection = suicide).

The complex relationship between the one and the many, between the subjective identity of the individual and that of the collectivity, is at the core of the repetitionr project, also by Les Liens invisibles, ironic operation which enhances the fictitious nature of online participatory democracy, and shifts the attention to the needs and the problematic nature of turning virtual campaigns into concrete real actions.

On-demand democracy, multiple-choice-democracy, click-democracy (from the introduction by Franco Berardi Bifo at the Liens’ workshop), are the symptoms of the total loss of the referent as an external and autonomous element from language. Following Baudrillard’s prophecy, a simulation democracy is create in which the effects of one’s own actions are not assessable if not statistically through the number of signatures automatically collected at random by Les Liens’ software.

Sharing, knowledge exchange and conscious use of technology have also been the recurrent themes of open workshops. Open Design City “Make your own market”, for instance, was a collaborative open design space in which technical skills were shared to encourage recycling, personalization and sustainable market. Likewise, Booki by Floss Manuals presents a free service and a social network for the creation of books both by single authors and by collectives, and a software, distributed on GPL licence that can be downloaded, reused and customized. 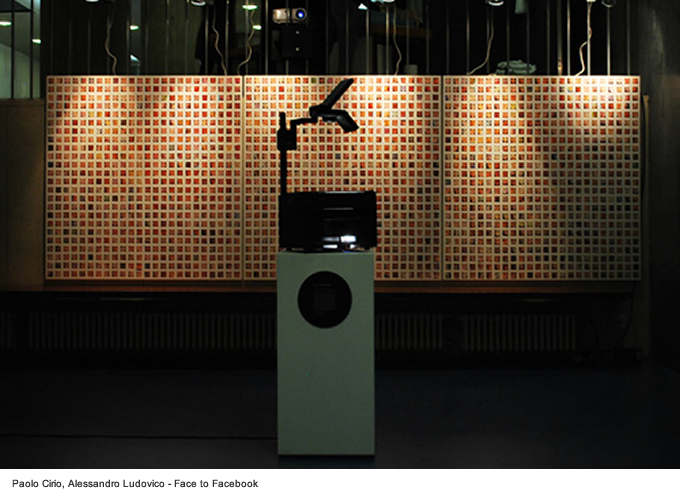 Thus, the projects of Transmediale 11 seem to show how the weapons which can be used to destabilize the political and social status-quo are linked to practices of fake and irony, as well as to the artists’ ability to start semantic circles and subjectivation processes between the real world and the web. Often, viewing the last one as the playground starting point to reach the beyond-screen, the off-the-field, and give back bodies and matter solidity to those intangible signs which wants to replace it.

It seems like it’s about reversing the direction of travel – from the virtual to the real, rather than from the real to the virtual – and about adding hermeneutical levels of criticism to the real, through the falls of the virtual on the real itself. Let’s remember that in the web, as in real life, getting lost can be a fascinating epistemological experience, and not a waste of time.