The Theatre Of Electronic Surveillance 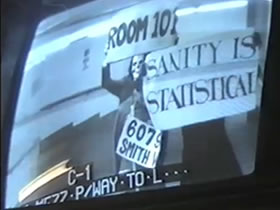 Does anyone remember Enemy of The State directed by Tony Scott and starring Will Smith and Gene Hackman? The story deals with a man targeted by closed-circuit cameras, radars, bugs, satellite indicators, high-sensitive microphones following each of his movements. This movie as many others is concerned with important issues such as control, wire-tapping, data security and satellite espionage. Among them we must mention Francis Ford Coppola’s The Conversation,The End of violence by the German director Wenders and The listening, shut in 2006 by the Italian director Giacomo Martelli.

Recently these issues has been handled by a US group, The Builders Association. Its manager Marianne Weems specializes in theatre stage design richly equipped with digital technology and wide screens. It is the producer which at the RomaEuropa Festival in 2003 showed the multi-prize-winning movie Alladeen, the non-fairy-tale of call centre operators in Bangalore , India , also winner of an Obie Award.

Supervision is the association’s latest output going on the first tour in UK , Australia and US. It is composed of 3 stories of privacy violation and surveillance over free citizens, real-time monitored without their permission. Their lives are so open to everybody’s eyes that you can see everything they do: from their banking operation to each of their travels in the country, from the pay they bank to everyday shopping, as well as their encounters in monitored public spaces. Mrs Marianne Weems sets the scene for everyday data piracy stories in a post-private era. Here the stories are tied together with the common issue of everyone’s own personal identity as branched, unmanageable information, no more bound to a body but travelling through thousands processors in an invisible data space.

They are people living in the ‘ white noise’ of the continuous remote connection, voyagers stuck at the border line because of surveillance systems criss-crossing strictly confidential and personal pieces of information with those inside the AIDC ( Automatic Identification and Data Capture) . Mrs Weems can boast the collaboration as dramatist and assistant for Elizabeth LeCompte and Richard Foreman’s production). She gave these “data-bodies” and these immaterial “info-spheres” tangible concreteness. She managed to do it creating a majestic architecture made of a wide screen, multiple real-time screenings, computerized animations and a motion-capture system.

We usually get phone calls to our mobile number from companies not hiding to know which is our phone network and how much we pay for our calls and being eager to offer us a better subscription. Credit cards, personal ETC, cards with magnetic tape, SIM, e-mails, net surfing, website attendance: the first filing of our personal life starts here, through target-software able to prise out our passwords, logins, ID, access codes.

Monitors, web bugs (a kind of invisible cookies set by ads companies to track users, analyse their habitudes and sell the information they got to other commercial societies), biometrical techniques, they all allow the identification of individuals thanks to RFID technology (Radio Frequency Identification), i.e. the identification of specific body features through a microchip tracking objects and people.

Nowadays there are data collectors little as a seed of rice, so that they could be inserted under skin and make us become living locators. On this subject we can’t forget the huge US campaign for boycotting the company Benetton after this latter announced the introduction of TAG RFID for clothes. The company justified this introduction by saying it was due to logistics and new marketing strategies (this strategy involved the undesired track not only of United Colours’ sweaters, but also of the buyers). Among the artists working on surveillance systems we have to mention the Preemptive Media, a group of US media artists. Recently they got a new entry, Mrs Beatriz De Costa, who has just left the group Critical Art Ensemble.

In Zapped! they promote specific workshop to come in touch with RFID technology and learn how to construct a own sound or visual MIY detector (in shape of a key case or bracelet) in order to identify possible TAGS. At last we speak about the Surveillance Camera Player: since 1996 they have realized a critical theatre made of silent performances showing slogan-shields and actions in front of surveillance monitors set in different cities. Their aim is to unveil and denounce the presence social control.

he group redacted a real, regularly upgraded, map published in the net. Moreover, the creation of a web I-see applicative let people calculate their own tracks avoiding the watchful eye of the monitor.