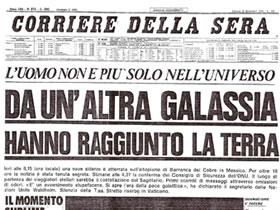 In the long list of festival that follows during the year, and that gets longer and longer, The Influencers conquered an enviable position as a cult event. Organized in Barcelona by the d-i-n-a network, creator in Italy of net.art events part of the history, The Influencers is carried out in one of the Sonar headquarters, the Centre de Cultura Contemporanea de Barcelona (CCCB) , but the two share very little. Three days, no shows no concerts, as d-i-n-a prefers the “live talk show” formula, that sees some champions of media actionism and radical entertainment involved in a close confrontation with an attentive audience. A confrontation that often goes on even outside the event and remain in the memory as an experience, more than as a passive moment.

A glance back can give maybe the idea of what we’re saying. Imagine a stage where Adbusters , reached the moment to tell the spirit of subvertising and presented some of her initiatives  from Buy Nothing Day alle to Blackspot Sneakers  gave space to Dragan Zivadinov from Noordung Cosmokinetik Cabine t, the theatre part of Neue Slowenische Kunst (NSK) . Arrived in Barcelona from NSK State to present in a grotesque form the colossal project Inhabited Sculpture One Versus One , a show where the space has no gravity, in a training capsule that has 5 stages along 50 years, that provides the substitution of dead actors with mechanical avatar, assigned to be sent in the space at the end of the project.

And still the Yes Men with their film Josh On and their work on the social network, Eddo Stern (one of the author of Waco Resurrection), Marko Pelijhan ( Makrolab ) and the two Czech filmmakers Vít Klusák and Filip Remunda , author of the exhilarant Cesky Sen . A movie built as a reality, to verify the strength of the marketing in a country where this has supplanted since little the regime propaganda. The two filmmakers have built a spectacular communication that sponsors  with TV spots, manifests and a delicious song  the next opening of an huge market that doesn’t exist really. The day after the opening hundred of clients went there finding just a plasterboard façade, reacting now with reassignment, now with violence, but also with irony and extraordinary acumen in front of a dissolution of a dream.

Vuk Cosic is the ineffable father of the net.art, that as Duchamp seems doing nothing any more but as Duchamp still has lots to say (and who doesn’t believe this can read the interview by Regine Debatty, or the text written for the catalogue of the MEIAC). DJ Spooky that Subliminal Kid , the philosopher dj, theoretical of the remix culture, author of Rhythm Science and initiator of the “illbient” genre, is a star: we’ll be all ears for him. Molleindustria is the Italian factory that revolutionized the indipendent videogame area, with the germs of the guerrilla and started, with the McDonald’s Videogame , a little masterpiece of counter-advertising.

With the IRWIN collective continues the explorations of a fascinating territory such as the NSK. IRWIN produces the iconography of the NSK State, a phantom state arisen in 1984 in the heart of Europe that adopt the aesthetic and symbolism of totalitarian states in a sort of hyperrealism that reveals the more ferocious form of parody. “Our newspapers are false, but they don’t lie”, declares Vincenzo Sparagna, responsible, during the 70’s and 80’s, of some excellent media hoax, originator of some review such as Il Male and Frigidaire , and authentic precursor in his extraordinary capacity to see the Empire when it didn’t existed yet and act in the world as it was already “globalized”.

An absolute European preview will be the intervention of Oscar Brahim , an Argentinean Taxi that has in his trunk the necessary to modify the visual ambient every time that the publicity comes into his eyes. During the night of the 8 th July the festival will close with the Chicks on Speed, the applauded mothers of the electroclash that conquered the fame deceiving public and critic with false registrations and merchandising. They’re not even a real group, but an artistic multidisciplinary project, that goes from music to visual art performance

As you can see, the link from different proposes is fleeting, but sturdy. It is not built on genre or discipline differences, and doesn’t focus on a community or network in particular, but rather present a new series of experiences that intervenes on the flow of information and on the big media machine in an aggressive and creative way: cultural jamming, communication guerrilla, plagiarism . A tradition that goes through the second half of the Twentieth Century, and that Influencers proposes to rebuilt.