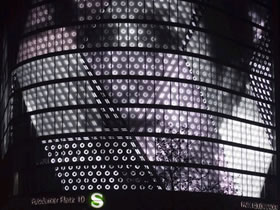 This year Transmediale 06 of Berlin carried lots of changes. The evident novelty is the location, no more the spacious Haus der Kulturen der Welt , but in the discreet Akademie der Kuenste. The director of this festival, Andreas Broeckmann, sees in the transfer a sign that strengthen the relationship with arte in general. More than a logistic need. And the festival subtitle took the same direction, from “International Media Art Festival” to ” Festival for Art and Digital Culture “.

Transmediale 06 theme was Reality Addicts and the debate emerged, in the conferences as well, has been really interesting, even if it leaves lots of doubts, in my opinion. Made the point of the situation and saw the changes brought by the technologies most of all in the last ten years, we note the errors of valuation and the false illusions. The theme is about the perception of the reality mediated by technologies and the possibility to carry out processes able to unmask and mix up this filtered reality. Transmediale 05 propose to the “dependent of reality” to address a glance critical and conscious to the machineries. So that they search reality not behind a screen, but further.

On the same wavelength as the thematic nucleus of disillusion with the technologic reality, inside the festival was put up the exhibition Smile Machines , by the French Anne-Marie Duguet , who emphasizes the relationship with the contemporary art in selecting the works, proposing a historic path, who didn’t necessarily privilege the most innovative works by the technologic point of view. From Fluxus to Net Artist , the lead that allows the connections between present and past s the humour. The irony that can gush in different modalities.

From the smile provoked by the failures of the technologies and the idealization of the machine, to the irony the works on a mediatic level, under the form of social critic and subversive of the system itself, to the ingenuous hilarity that gush observing some device deliciously useless.

Thirty works by the different impact, through whom we make fun of the technology and it does the same with us. Between the works exposed: Smile Machine (1971), the terrifying mechanism that oblige people smiling, by George Maciunas. Helpless Robot (1987-1996) by Norman White, Flux interactive sculpture or useless robot, that augment its arrogance in connection with how much the person support it in his constant request of help.

Paul Demarinis with Grind Snaxe Blind Apes (1997) make a tribute to the conceptual artist Jim Pomeroy , raising a construction of boxes, where there’s a cage with a monkey arm that paints the face of the artist, with fluorescent colours on a roll. And in memory of this short overview, the gold skeleton Gilda , from the work Dow does the right thing (2002-2005) by The Yes Men, a project that lights, through a mediatic hoax, the lack of ethic in the world of business.

Back to the festival, between the projects in competition, the first prize goes to Eisberg Sonde / SGM-Iceberg-probe by Agnes Mayer Brandis . In a little tent prepared outside Transmediale, it is possible to guide a sound attached to a thread, inside a hole in the ground and observing its observations on the screen. The video simulation is composed by 3d material and original material, derived by explorations inside underground iceberg under the ice trail of Germany.

Between others nominations, the sound installation Vexations Composition in Progress , by Yuko Mohri and Soichiro Mihara , that plays on the passage among analogical and digital in a succession of space and time, starting from the song Vexations by the compositor Erik Satie . The composition for piano is sent in a cyclic infinite loop, and a computer plait the notes of the music with the sound of the ambient. Microphones and sensors, present in the expo space, are connected to the processor who analyzes the impulses, converts the sound of the piano and emits a sound signal. So that it goes back to the system in a never-ending play of remands.

GWEI Google will eat itself by Ubermorgen.com, Alessandro Ludovico, e Paolo Cirio (see the artiche GWEI-Il fun dictator of DigiMag 11) is another interesting work, who evidence the paradox in an innate huge mediatic and economic system as Google. The project consist into buying Google actions, investing the income of its publicity, earned exploiting the mechanism of Google text advertisement.

As far as the other location are concerned, I found impressive the SPOTS project, realized by the director of Transmediale 06, Andreas Broeckmann. SPOTS is an interactive media and the front of a building in Potsdamer Platz , to whom a matrix of 1800 lights have been overlapped. It visualizes in different days the works of different artists, Jim Campbell, Rafael Lozano-Hemmer, John Dekron and Carsten Nicolai . It renders the wall interactive, thanks to the sensors situated in the square.

Last but not least, on the premises of the Tesla media-lab the performance Kubic’s Cube resulted hypnotic. The performance, a piece of dance performed by a robot, whose movements have been studied by the choreographer Pablo Ventura . This disturbing pile of aluminium three meter and a half tall, assembled by Louis Philip Demers moves in a fascinating way, supporting the rhythm of the minimal music by Francisco Lopez .

On the whole I think the choice of the headquarter created some difficulties of management, with unnecessary queue and a full show, and it probably influenced the choice of giving more space to video, but less space to installations and performances.