Passion And Fashion: The Highly Qualified For Work 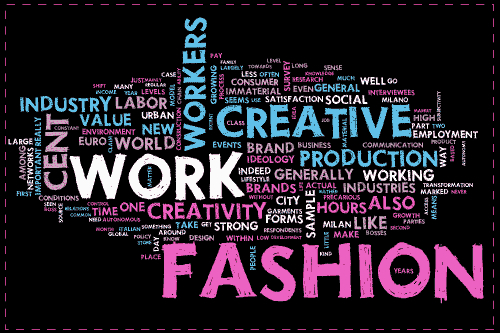 It has been almost three years since the publication of Produttori di Stile, the notebook reporting the results of a research financed by Provincia di Milano about working practices and flexibility in a number of fashion houses in Milan. At the time we witnessed the presentation (http://www.serpicanaro.org/features/produttori-di-stile) during which authors and promoters, among the other things, underlined how 8 out of 10 contracts, in all the major business companies of such field/section/area, were atypical (cocopro, interns, fake VAT number recordings etc); this not as a response to production peaks, but as basic structural resource, as a far from being atypical strategy/procedure of human resources management.

They were also recognizing that figures provided by Osservatorio del Mercato del Lavoro (Working Market Observatory) were not sufficient to investigate the phenomenon as a whole, since statistics on “independent” working practices, as well as consultants, internships, causal collaborators, are not a systematically and officially data collected by the institutions.

During that presentation we realized that the speakers were facing a peculiar kind of “submerged”, not actually referring to the fashion production in its material side, but rather focusing on everything concerning fashion’s “immaterial” production. They weren’t reading it under this light, though. They were in fact depicting those people who create brand identities, advertising, write for niche magazines, realize events, take photos, manage informative fluxes as “higly qualified” professionists. implicitly comparing them to those super-payed consultants and multiclients, the kind you could find in 80’s in Milan, but doesn’t exist anymore.

In that moment we didn’t have any statistics or researches proving this, but Serpica Naro‘s experience on field during these last years, having spoken to a thousand people, getting emails and confidences from every kind of worker of the branch, offered us a privileged point of view which made some of the conclusions reported by the speakers clash, especially in respect of everything concerning the immaterial valorization of fashion and workers.

Last year the occasion came to dig deeper in this matter, starting a collaboration with Adam Arvidsson, professor of Sociology of Globalization at the Department of Politics Sciences of Milan. Together with him, we created a work-team composed by advertisers and communicators, academics, independent researchers, economists, experts in labour law and students which we called Milan Urban Research (Ricerca Urbana Milano, http://www.ricercaurbanamilano.com/), with a mutual aim: to question over oneself and the environment.

We started from the remark that in Italy, as well as in the rest of Europe, since quite a long time it is spoken of “creative industries” and “creative and cognitive work” as important sources for economic and social growth. In Milan, especially, this issue has become crucial for the economy of the city and its cultural life, basis of fashion and design industries. For this reason we reckoned it would become necessary to know closely the problems of creative work, particularly in fashion businesses.

The first research would have had the aim to bring into focus the perspectives, ideas, working conditions, the relations with firms and the roles of creativity in the creation of economic value in Milan and in its province.
We titled it The highly Qualified-The first urban research on creative fashion work in Milan . This work would have also been useful as first step of a wider research, begun last year within the EduFashion European project (http://www.edufashion.org), financed with the backing of European Union in the Life Long Learning program, and of which we will tell better during next year.

In this article I will try to summarize how we developed the research and its main outcomes, which you can examine entirely downloading it from the Ricerca Urbana Milano website, either in English or Italian.

The investigation begun with some qualitative interviews with workers of the fashion industry, selected through our network of acquaintances, who furnished us with further contacts for the next interviews. In the second phase we prepared an online poll to be spread out through Facebook and the distribution of about a thousand leaflets during the fashion week. The questions we were asking focused on subjective experience of creative work, trying to understand not only what kind of employment was being brought on, but most of all, what exactly daily activities consisted in.

During these weeks we also organized some public seminars, inviting academics and professionals in order to present some analysis on fashion environment, followed by discussions within which we were sharing impressions about the first partial results that helped us to direct our interpretation in the best way possible.

For instance, it is interesting to show how different studies underline how from the end of the ’90s there has been a continuous transfer of worth going on from the tangible production of clothing towards the immaterial production of design and communication., which brought to a consequent modification in typologies of working positions within Milan province. Employees in clothing production are continuously decreasing in number, whereas workers whose job consists in the creation of image, advertising, communication, events, turning Milan in one of the world’s major fashion display-windows.

This variation is to be related to the brandisation of fashion houses, which shifted from a business model based on the care for consumers’ tastes, to one aimed to accumulate long-term profits working on the coherence and diffusion of their brand and putting worth in it producing accessories at affordable prices for a consistently bigger population of fashion victims. The results of such a strategy didn’t take long to come out, Italian major fashion brands have doubled their worth in 4 years period only, from 2004 to 2008.

Instead, economic figures furnished by firms are not similar to our interviewees’ economic conditions. In fact, the greater part of them are generally underpaid, have temporary contracts, and are working more than 8 hours per day. The number of those who have Open-ended contracts does not reach the 10% of the whole and the most common type of relations with the employer is the project-based contract, which average length is usually less than one year. The ones that are not under project-based contracts belong to those second generation’s autonomous workers (http://impresa-stato.mi.camcom.it/im_46/bologna.htm), namely the by now common and well known “fake VAT numbers”.

With these words, one of our interviewees reflects on his position: “My wish is that the precarious jobs in my area are positive in the sense that accumulating many experiences as this one in the course of time I sincerely hope to get -maybe in ten years time- to get a CV that is suitable for a responsibility role that might surely keep the creative side intact but maybe might as well give an economic stability that would allow me to be autonomous oh God, I basically just told you that I’m already unconsciously resigned to be a temporary-contract worker until I’m thirty-five.”

Average wages are about 1150 euros and do not go over 1500 euros even when the get older. Under thirties average earnings woefully remain under 1000 euros. To this has to be added that more than the half complains about delays in payments and had to rely on parents for an economic support during the last two years: “Come on, let’s say it, you don’t need to be a genius to get this, none of us lives on this work only, everyone’s helped out by family and for what concerns me, I also collaborate with a newspaper and supplement my income giving lessons to some students. I don’t know exactly how things are set in other editorial offices, but in general you don’t really get to see many rich journalist, do you.”

However, whilst the ones who answered to our polls and interviews tend to define their job as autonomous and creative and to consider themselves fulfilled (75%!), if we have a look on the concreteness of their experience, it comes out a rather different state of things. Autonomy is very circumscribed; employers pretend total obedience during the working-day (which often is the working-night as well), shifts times are variable and prolonged and they have scarce control over it “ There’s one guideline, the image is given to every shop in the same way, namely if in (via) Montenapoleone it is decided that from the 15th to the 25th of February display-windows must show that item, you’ll find the same one all over the world, New York, Tokyo, Paris, Abu Dhabi, it will always be the same one, for that period of time. This is about display-windows as well as the inside exposition.”

The most relevant discover of this research is the fact that working in this field is constantly and pervasively evaluated not in monetary terms. While most of interviewed university students claim to be very satisfied about their job, the same percentage is deeply unsatisfied about salaries and working schedules but this data does not affect the image of the profession in its complex. A great amount of the gratification seems to come from feeling “creative” and part of a particular creative scene: “I keep staying in this field because I like it, I have my own projects which I’d like to accomplish. I also think that waking up every morning happy about going to work, do something that you like it’s great. I still have to settle but I hope for the best, even if the future seems to darken”.

What explanation could we find to this phenomenon? The answer that we chose focuses on three main dynamics of a more complicated phenomenon which we call Ideology of Creatività (Ideologia della Creatività), which on one hand exalts a lifestyle devoted to self fulfillment through the usage and participation to a gentrified urban scene. On the other hand it produces the lack of a true alternative to this ideology. The reason for this lack could be explained through the same bradization process which subsumes, with growing rapidity, every autonomous form of social effervescence which has always been the base for alternative lifestyles.

Working in the fashion field means being almost totally absorbed by that world, this concerning the investment of working time as well as maintaining social relations that allow to keep having a job. It is easy to get to the point in which the product of value corresponds to the production of one’s individuality and workers are absorbed in it to the point of being virtually unable to imagine anything else or to even have the actual time to build up another one (about 70% declares not to have enough money to have a family or time for political/social activities).

The “passion” for one’s work and the constant pursuit of self-fulfillment through work hence become a mean of productiveness for informational capitalism, through which brands are produced, the city is gentrified and workers are not perceived as such but turn into atomized individuals constantly seeking for confirmation of their being creative.

“In the beginning everything is so like ‘wow finally I cant believe it’ then you realize that you’re the one who’s exploited by everyone, anyway, because they always give you the most boring work to be done. Because it’s true that the bottom low is from where we all have to start and me I’m the first one who says: ok cool, I just got out from university as untouched and full of theory as you see me, I don’t know how to do anything so fair enough. But after three years you notice that this thing actually bothers you. Especially because I work a lot more than my boss. My boss is almost never there, he just does briefs with journalists, stays there for a couple of minutes and then he’s gone. For the rest, nobody would be working if I wasn’t there”.