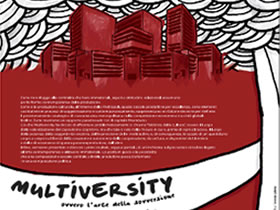 “Arbeit macht kapital”: this is what says the neon work by Claire Fontaine , at S.a.L.E.-Docks in Venice, a space for the promotion of contemporary art and cultural production. It was open last October and it is self-managed by a group of students and militants with a background in community centers.

Arbeit Macht Kapital (work makes capital) is the detournement by Claire Fontaine of the slogan placed at the entrances to a number of Nazi concentration camps. It is a detournement that invites us to reflect on the capital valorisation processes of cultural production and creativity in this Post-Fordism era, that means a production model where languages, affections, relationships and, last but not least, creativity are used to generate exploitation, uncertainty and new kinds of alienation.

herefore, Claire Fontaine’s work introduces a new perspective of the (really serious) problem of political impasse in the field of contemporary art production, and it also introduces the theme of capital valorisation of cultural production and, most of all, of that subversive power that can be represented by the metropolis cognitive work. These political problems promoted “Multiversity, or the Art of Subversion“, the event that took place at S.a.L.E.-Docks between May 16th and May 18th.

The event can be seen as an important stage of a project that is not only an artistic exhibition project because, on the contrary, it has a militant nature in Venice, where the field of cultural production is becoming more and more important.

However, it is not a localist perspective; indeed it underlines the fact that every kind of knowledge, including the artistic one, must be used, in fighting situations, to take a stand (as Michel Foucault said) and to be tested every day in the real world.

Thus, Multiversity is aimed at bringing the discussion about art and cultural production to a militant context, through the meeting of twenty speakers and a comparison among different kinds of movement research and institutional points of view.

The event was organized into three seminar sessions: art and activism, art and the market, art and multitude.

Just to mention some of the speakers: Antonio Negri, Brian Holmes, Giovanna Zapperi, Osfa, Hans Ulrich Obrist, Matteo Pasquinelli, Gigi Roggero and Anna Daneri . But I would like to talk especially about two speakers and their seminars, that underline the importance of a theme that is crucial to those who are interested in activism in the so-called “culture factory”.

The first one is Maurizio Lazzarato. He is a Paris-based Italian philosopher who introduced an interesting vision of art practices as a governmental tool. Going back to Félix Guattari, Lazzarato underlined the coexistence of two dimensions in the artistic context: molar and molecular. The first one represents functions (work, artist, public), tools (festivals, museums, biennials) and assessment criteria. The second one represents what Guattari defined as freedom diversity, heterogeneity and subjectivity of every art practice.

But there is a problem: there isn’t a dialectical relation between the two dimensions, and the molecular part is constantly absorbed in the molar one, and so it is impossible to subvert art as institution.

In art, the molar and the molecular exist at the same time, without canceling each other out, and we can find the same process in the valorisation of cultural production, where the subjectivity production diversity is absorbed and subsumed into the culture industry that is a means of promotion of intellectual tourism and luxury business.

Judith Revel, a sociologist of Centre Foucault, started from where Lazzarato stopped. Lazzarato decided to concentrate on the analysis of the relation between capitalist apparatus and art production, while Judith Revel underlined how art can face, with subjectivity, that apparatus.

Judith Revel claimed that the contemporary capitalism is responsible for an equation of production and creation  i.e. valorisation of relationships, affections, languages and cooperation  and all this means that capital depends on what can’t be dominated (even if it can be governed): subjectivity production, experimenting, invention, human capacity to create ontology, to produce new forms of existence that can defeat and subvert power.

This subversive feature, according to Judith Revel, comes from the concept of power by Michel Foucault, who claimed that power is always wielded on free movements (otherwise, we should talk of dominance).

Capital and, in this specific case, cultural industry and art as institution function as parasites of these free movements, by eating them, by valorising them, but, at the same time, these freedom elements can be seen as a representation of the huge power conflicts with capital, that depends on them, always comes after, able to reproduce, but not to create, something.

So, creation is the prerogative of men and women, and it is denied to capital. Art and politics share the potential for being fields of experimenting, (potentially subversive) invention of new spaces in the urban context, of new kinds of subjectivity and of metropolitan communities.

Revel’s speech ends with a warning (that S.a.L.E in Venice has already understood) about the importance of investigation into the social structure of metropolitan Post-Fordism working class. According to Judith Revel, this investigation is not just a Post-working class desire; it is an important part of a policy that wants to generate real conflicts, and not self-referential knowledge.

S.a.L.E.-Docks hopes that soon the Multiversity debate can be read in some publications and, most of all, behind the reasons of uncontrollable large and small conflicts.