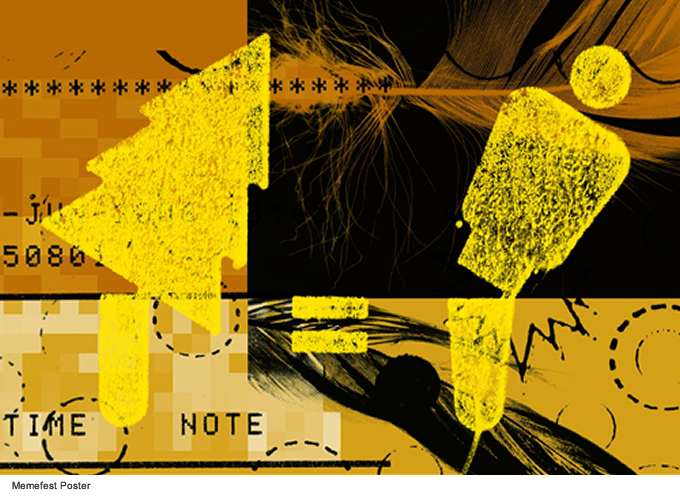 In a world where communication is more and more rapid and pervasive, we constantly show a deficit of interpretative tools that allow us to really understand this complexity and to interact with it. Many of the institutions traditionally delegated to the production of such tools have gradually shown their inadequacy, crystallizing in purely aesthetic logics and marrying an idea of creativity as a gesture included in itself, which is born and consequently develops independently of the rest in a sort of “perfect” and “pure” emptiness.

This trend concerns different types of players. Firstly, it involves the training institutions. In many cases, these have proved unable to adapt themselves to the multi-paradigmatic elasticity necessary to address the complexity of communication and, at the same time, are flat?/narrow minded? When it comes to purely marketing logics. This is true both for what concerns the critical choices of the existing market, and for the dynamics of attraction for students (who are increasingly seen as customers) in a highly competitive market.

More involved into this logic are the communication and advertising festivals. Under great pressure from the markets, these festivals often become completely self-refencial: sort of dog fairs in which creativity is reduced to a tautology that must not and cannot reflect on the assumptions and implications of the system in which it develops. 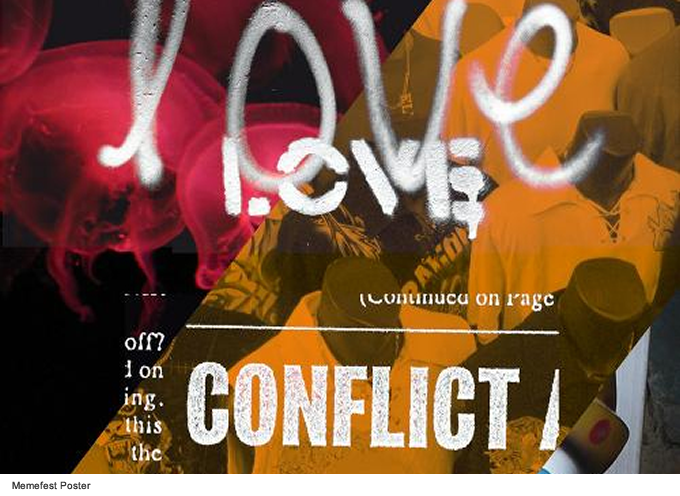 We spoke about these themes, and much more, with Oliver Vodeb, director of Memefest – International Festival of Radical Communication in Ljubljana, which since 2002, deals with issues of radical and critical communication in a thoughtful way, articulating its activities among educational international networks. Through a constant critical stress, Memefest seeks to challenge the business ideologies implicit in communication.

Bertram Niessen: The Memefest story is extremely structured??. Instead of trying to consolidate your position by becoming “classic” (as many other festivals have done), you have changed your strategies and forms several times. Recently you have chosen to build your own social network in order to fight the digital exploitation of labour in commercial social networks. It’s a big challenge. Can you explain your choices by going more in depth?

Memefest was conceived as a tactical educational and communication tool. In the fields of communication, design and arts, festivals play a highly influential and important role. They are basically mechanisms that create frameworks of what is understood as good or bad. They create a framework of values and criteria of quality. Their impact to practice is very strong. In many cases it is even stronger than the impact of universities. If we look at the field of communication, festivals are approaching practice from the perspective of market communication.

They tend to reproduce a specific ideology, they reproduce the logic of winners and losers, and they evaluate and award works in a highly de-contextualised manner. Usually on the abstract concept of “good idea” and formal and aesthetic solutions. What we try to do with Memefest is to create a framework of quality for what we call ?good communication work?. Our criteria is focused on the social, cultural, political impact.

On context. On process. On communication approaches that don’t reproduce the logic of the market.We believe that in that way we can help the collective production of knowledge that enables different communication practice. But Memefest is focused also on theory. It connects practice with theory and it approaches communication form a critical interdisciplinary perspective. We believe that collaboration creates better results than competition and we try to involve participants in to a educational processes. This form- the festival, was the main process we used to achieve social impact. After Facebook became so popular we noticed that there are not many alternatives around. Facebook is a commodified environment of digital work. A marketing culture covered in “freindly interactions”.

With our social network we want to give people the chance to engage with other people who are interested in radical communication. All in a non commercial environment. We think this is important and to a certain extent also radical. With this we have extended the festival part to a permanent community part. It will be interesting to see what will happen. 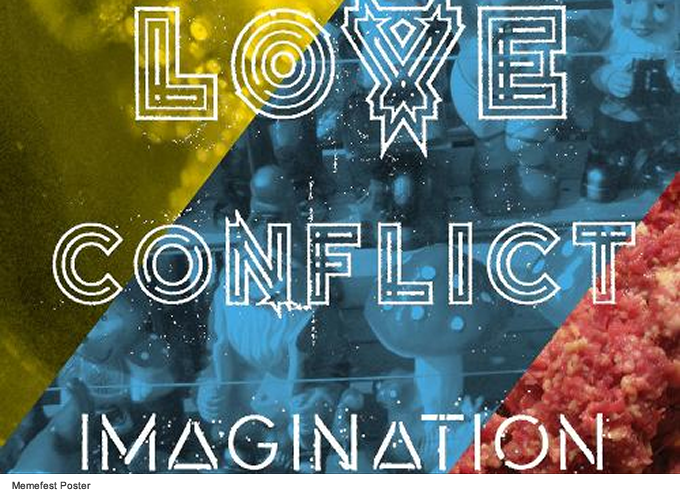 Bertram Niessen: Memefest seems to be have a wide diffusion around the world. You have had many collaborations with many groups and institutions worldwide. How do these networks work? What are the values and the ideas behind all these networking activities?

Oliver Vodeb:The internal network consists of people who are part of the team and are organising Memefest internationally and locally. We have established local nodes in Brasil, Colombia and Serbia. The next dimensions of the network are educators, curators and editors, who work with Memefest and work with their students on Memefest outlines in Universities. Some universities do this regularly. For example we have collaborated with very different educational environments such as the University Caldas in Colombia, American University of Sharjah, University of Technology, Sydney, Faculty for Social sciences in Ljubljana. In this way we were able to penetrate the official curriculum. And then there are participants in the educational festival process, of course.

We are currently trying to build a network with people who are interested in radical communication. Cultural intermediaries, mainly. For this we have created a social networking platform on our web site. There are different values within the network. Some are built around activist culture, some around academic and some around artistic and some around professional culture. But all have a common value which is the need to create social change through communication in the public sphere.

Bertram Niessen: Memefest has a high theoretical profile but, at the same time, its appeal is quite popular. How do you manage to balance the role of critical thought whilst sustaining this relationship?

Oliver Vodeb: I think we manage to connect very different spheres in a productive manner. Academia, activism, professional discourse and the arts. Usually these fields operate exclusively. But then again, all these discourses tend to open up and include each other if a productive mechanism is given. I think we connect them on a communicative level, which then institutionalises independently of other institution within the Memefest process. We can communicate with all these fields independently but we can also connect them and mix them without losing the quality and integrity of the discourse.

Participants and partner institutions have recognised that opening up and participating in this new discourse can be very beneficial to them. Everyone can learn from each other. The popular appeal that you are referring to is more a visual articulation of this connection. A dialogic interface in the form of communicative relations with a visual vehicle which is process based. So, we use socially responsive communication to achieve this. 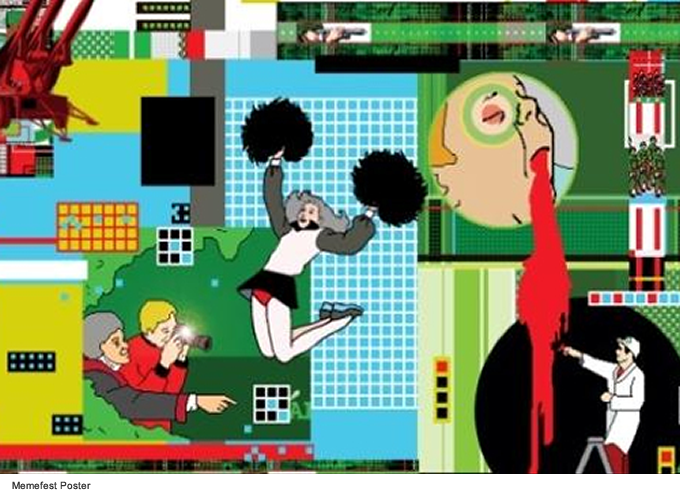 Bertram Niessen: Students, sociologists, artists, communicators, professionals. Who are you referring to, exactly?

Oliver Vodeb: People who are in one or another way connected with the field of communication in the public sphere. We want to work with people from within the academic environments as well as people outside. Professionals, but of course also activists. We try to connect and confront these different cultures without giving the commercial discourse the chance to interfere. Most of the participants are students and artists. A strategy to exclude the commercial sphere is a legitimate one. But personally I am more and more convinced that we need to work with commercial professionals as well. They do not have other forums and the logic of advertising agencies and commercial design studios hinders them to create critical thought. Not to speak about practice??

Bertram Niessen: You have not chosen to give a monetary grant but instead you have invited the winners of the friendly competition in Ljubljana for a collaborative workshop. Can you tell us something more about that?

Oliver Vodeb: The workshop will be in Nijmegen, the Netherlands. We are working with several good partner organisations on this event. Pina from Koper, Pink Sweater from Nijmegen and Loesje from Berlin. We are planning to make a radical communication event, part of which will be the Memefest workshop. 20 chosen participants with outstanding submissions will be invited to take part. The workshop concept is not yet conceived but I’d like to do a workshop in which we would try to provide some kind of visual map of radical and socially responsive communication. The difference between marketing and socially responsive communication is still invisible for many people.

This has deep ideological reasons, of course. There are huge numbers of communication campaigns that are supposed to work towards the social good. But they do not. The majority are created within the marketing logic. So, how to visually articulate the difference in social impact between marketing and socially responsive communication is something I am currently very interested in. How to articulate the difference in the approach outside of the written medium of theory? The workshop will be mentored by Memefest curators and myself. I think it’s going to be a strong experience for all of us. 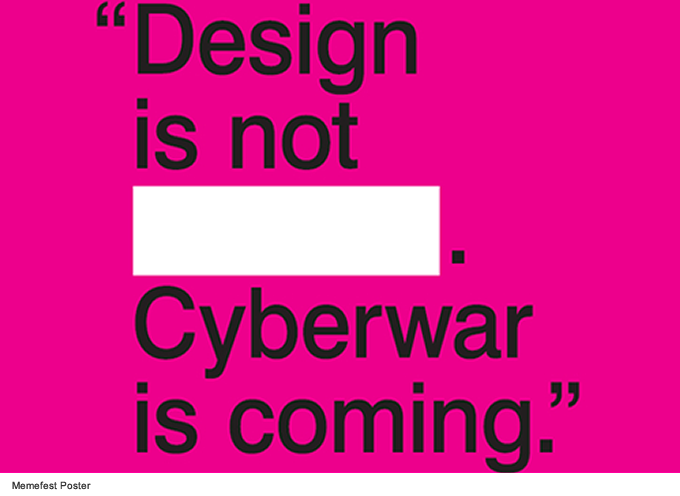 Bertram Niessen: What radical criticisms do you think it can contribute to contemporary communication?

Oliver Vodeb: They are essential. We need to rethink the very logic of communication if we want to achieve social change. Without radical criticism and theory this is not possible.