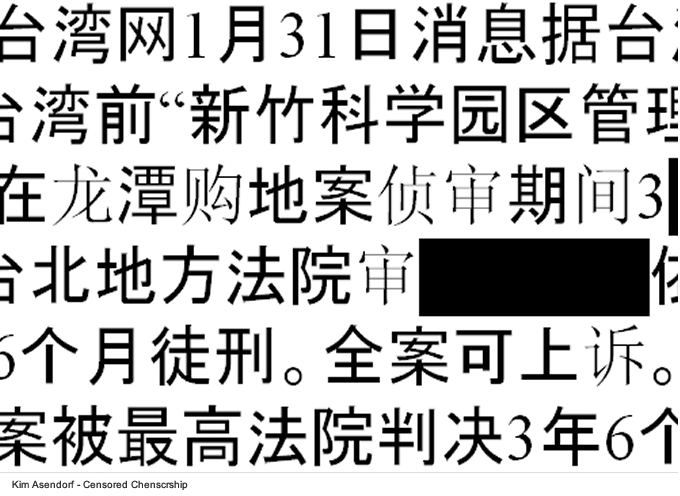 At a time when the Propaganda Department of the Chinese government has even more power than Prime Minister Wen Jiabao himself, it is worth considering exactly how powerful spin and government propaganda can be in the contemporary world. Of course, the Chinese censorship debate has been argued in many arenas. Certainly, everyone is familiar with the debate’s around Google’s enforcing of the government’s strict censorship laws and then their about-face.

Kim Asendorf’s piece, Censored Censorship, addresses some of those issues. It plays the censorship back against the censors. Lines of text, drawn from a variety of Chines media sources scans across the screen and scrolls upwards. Every now and then, a word is blacked out, hidden from us. The human mind creates narrative where there is none. Even if you don’t speak Chinese, the missing text is tantalising and almost as fascinating as the possible meaning of the text still on show.

A mystery is a very simple thing at heart, merely a puzzle with a piece missing. The mystery of censorship is starts with the question, why? Then, what? The what, is the thing that keeps us staring into the censors eyes, seeking answers. 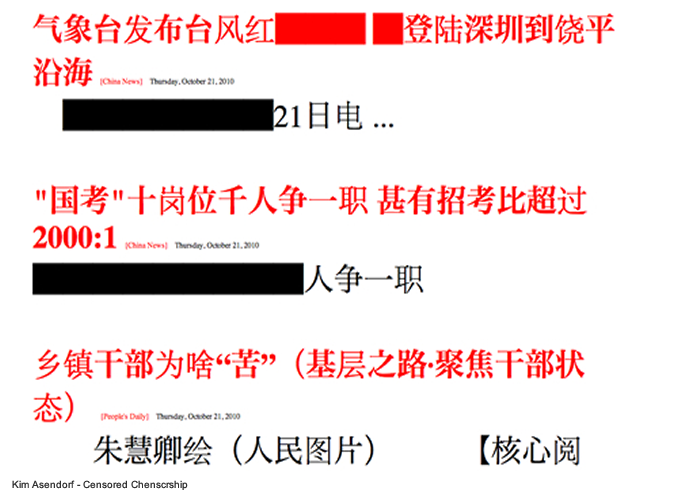 Censored Censorship plays out by scrolling slowly up the screen, allowing you to take in each line and how much of it is censored. The straightforward action reduces the amount of potential complexity that the work might inflict on a viewer who doesn’t speak Chinese. There is already enough complexity in any critical observation of the Chinese media. The piece merely presents the mystery and barrier created by censorship. Of course, language itself can be a barrier to understanding.

Because the work displays Chinese language news stories, if you don’t speak the language, you’re outside of the circle of comprehension already. You might be forgiven for dismissing the problem as being someone else’s. Easy to consign the problem to that part of our conscience that decides what we should and what we shouldn’t care about. Why should I care? It’s a completely different culture and therefore something that would never be of concern to us, here in the safe confines of the democratic western world. But you don’t have to understand the text for it to resonate and draw out meaning. It’s a political action taking place, not a narrative story.

Artists such as Ai Weiwei, living in China, have taken a well aimed swipe at their country’s closed down approach to censorship. In fact, Weiwei is even at present (January 2011) prevented from leaving China, because the government believe he might attend the Nobel peace prize ceremony for jailed Chinese dissident writer Liu Xiaobo. For a country that seemed to be slowly loosening the grip on the minds and political views of its citizens, it’s a bold move to make on the world’s political stage. Reinforcing as it does, the typical view of the country as scared and uncertain of how to remain in control. 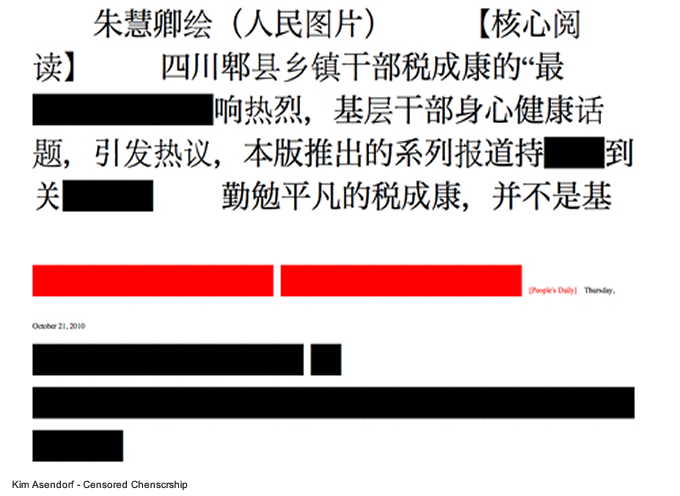 While many have believed that the borders of the country were slowly being lowered and a more open attitude embraced, it once again feels like things are no different than they were in the past. Business might be welcomed and encouraged to seek collaborations with China, but that’s only riding on the back of the Dollar and Yuan. Human rights have never stood in the way of profits of any denomination.

Still, are we really any better off in the West? A constant barrage from a thousand different sources greets our RSS feeds, our newspaper choices and TV channels. From IndyMedia to the Murdoch controlled news and entertainment outlets.

There are choices and options to select from. We can choose which news source to believe. Does that mean we have choices though?

Kim Asendorf’s Censored Censorship surfaces these questions. We can only hope to flick through enough options and land on the one that reflects our own viewpoints. Maybe none of us is truly free? The least we can hope for is the option to choose which jail we take residence within? 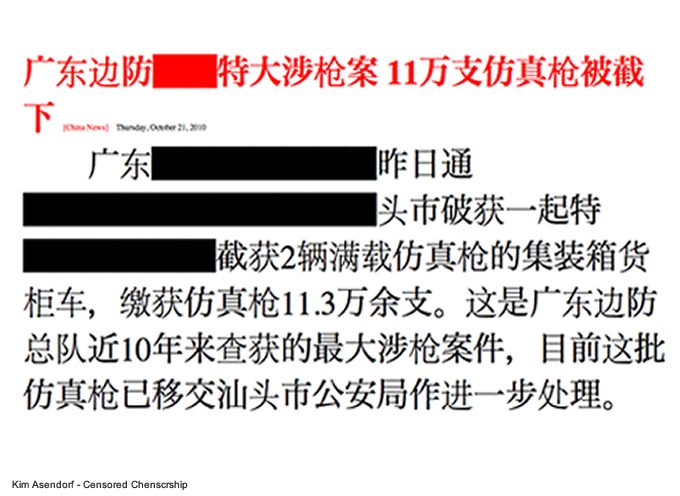