The Influencers 2012: War Through Art 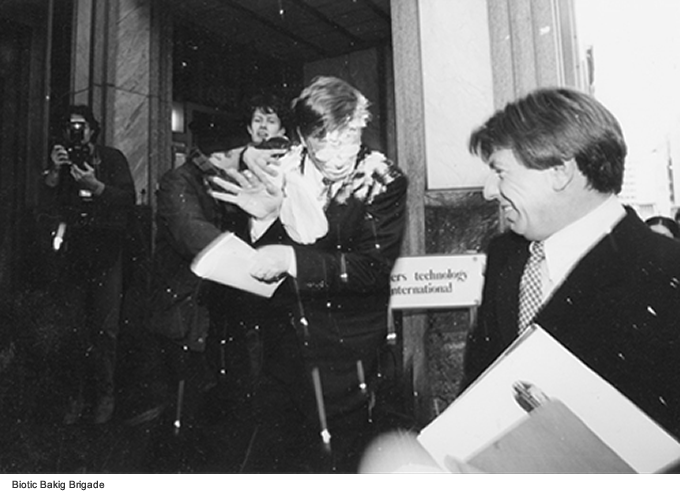 This year “The Influencers” had promised to be a very exciting festival, but being quite honest, when on earth has it ever disappointed? Or, hasn’t it positively surprised those people who visited it for the first time? The most original and dynamic festival of Barcelona is at its eighth edition in 2012 and, as ever, it’s taking place at CCCB, from 9th 11th February.

The programme, designed by experienced directors Bani Brusadin and Eva and Franco Mattes (0100101110101101.ORG), includes artists that are hard to ascribe to a particular movement. They can’t be identified in terms of their subject or their use of particular means of artistic expression. Their common denominator is the ability to go against the grain, by using their creativity and wits, by questioning what is taken for granted; by opening windows on world’s corners that have close to no chances of expression; and by creating parallel visions and realities with which an extremely variegated and transversal audience can identify.

The dancing is being opened by Voina, a radical Russian collective, composed by nearly twenty artists who challenge the Russian establishment and attack homophobia, racism and their country’s totalitarian actions, by putting on stage outrageous and provocative performances (the most famous is the huge penis painted on the drawbridge in front of FSB’s – former KGB – headquarter).

According to their principles, they don’t fight their “Voina” (the Russian term meaning war) inside the art gallery, which they consider breeding ground for “conformist trash”, but rather at the forefront in towns, in the mud of ice-cold Russian streets, in police stations, in clubs, in courthouses… and in museums, but not in a conventional way traditionally used by most artists to distinguish themselves. 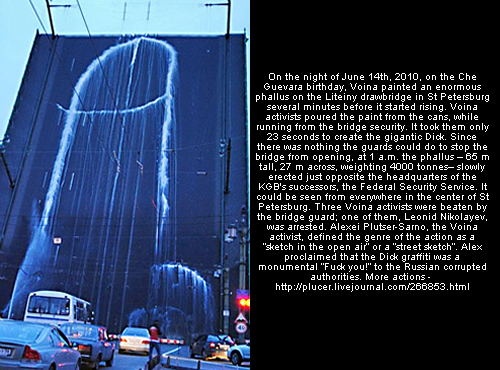 Russia has been wondering for months how it should behave towards this well-known and world-recognised collective, which has been nominated associate curator of the Berlin Biennal Exhibition in 2012. It seems that a repressive policy has had the upper hand: in fact, a Voina’s member is now in jail awaiting trial, another one was arrested in open violation of the law during a demonstration, where people demanded the revocation of the latest Russian general election, but he managed to escape from the police station; another member had to leave the country and now he’s running the risk of receiving an international arrest warrant.

Following one of the latest arrests, famous street-artist Banksy volunteered to pay his bail, thus drawing media attention on the collective’s cause and giving birth to a movement in defence of Voina, which the most part of the international artistic community is joining. The Influencers festival is taking part in it, by giving Voina’s members – visiting Barcelona – the opportunity of creating here too, as in many other North American and European cities, Voina Wanted action.

This year we’re going to see another star too: Rev. Billy (special guest in 2004), who is coming back after seven years rich of praiseworthy projects, such as: his film production of “What would Jesus buy?” (being screened during the festival), his nomination as New York Mayor and his involvement in “Occupy Wall Street”. For those people who don’t know him yet, Rev. Billy is a false preacher exhorting people to leave consumerism and to fight for economic equality, environmental protection and antimilitarism.

Rev. Billy’s actions take place in the streets, in big chain stores or in shopping centres, and they’re often accompanied by the multi-ethnic gospel choir of hisChurch of Earthalujah, an activists community led by him and his wife Savitri D. The festival programme is also including a surprise action by Rev. Billy: people are going to have fun (and reflect!). In 2004, he went to a Starbucks coffee shop and licked various parts of it, to prove that his body rejected it: this action caused various surrounding McDonald’s and KFCs to panic and completely puzzled the police intervening at the scene. 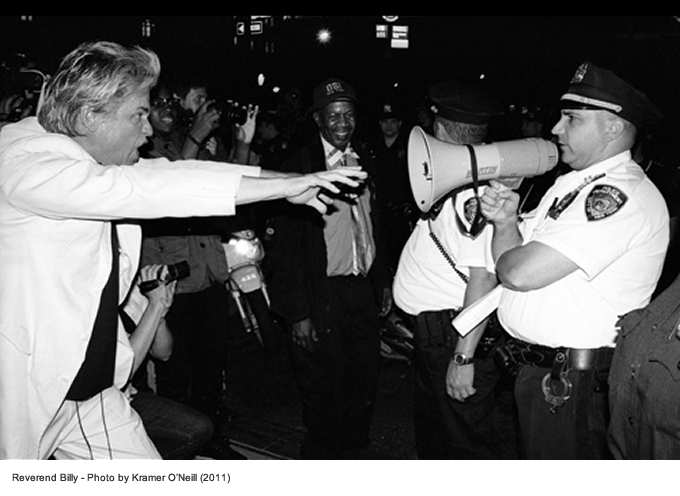 The third great festival protagonist is the French photograffeur JR, winner of the prestigious TED award in 2011. His career in the “pervasive” art field started when he was fifteen years old, after finding a camera in the underground in Paris. JR has gone from graffiti painted on suburban walls and terraces, to portrays, by looking for life behind drama, and people’s everyday life beyond media rhetoric.

In this way, he started travelling for projects increasingly in developing countries, in conflict zones, in poverty areas, where there aren’t museums or cultural places. Face2Facein the Middle East, was the greatest illegal art exhibition of all time which proved the equality between Palestinian people and Israelis, to which the multi-award winning film “Faces” by Gerard Massimino was dedicated; the incredible intervention into the Brazilian Providencia favelas opened the doors to “Women are heroes”.

This project, dedicated to women (“as pillars of their communities, discriminated in peace times, and main target in war ones”), was realised in different countries of Africa, succeeding every time to foster virtuous and long-lasting dynamics in villages and towns.

In order to keep the promise he had made to the people who took part in his project, JR brought their stories with him while he ttravelling,by exhibiting them in US and Europe. The documentation of “Women are heroes” became a film, also shortlisted for the Cannes Festival 2010. In 2011 JR was awarded the TED prize and on that occasion he wished to be able to involve the world in a new global art work.

Hence, the “Inside Out” project was born. This project consists in an exhibition where everybody can show his/her works. It can be found on the Web or along worldwide streets. The Influencers is organising it in Barcelona during its festival days too: if you love showing off, there’s the possibility to see your own portrait photography on posters, stuck on a big collective wall. 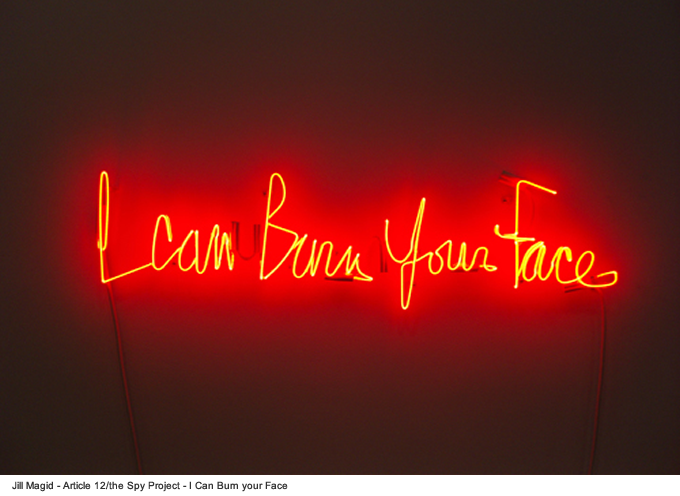 There is a lot of other projects, such as the one by Jill Magid. She’s a sensitive explorer of the secrets, authorities and surveillance, of the emotional, philosophical and juridical tensions between individuals and the institutions in charge of their “safety”. Jill tries to establish close relationships with impersonal structures, by often using seduction dynamics. She examines remote-working systems by deleting the individual; she looks for the fallacy of their omniscient point of view, their possibility to have a memory (but often not to be able to remind) and their essential role within societies, which makes them invisible and intangible.

Her research has produced texts, videos, multimedia installations and stories that often take the form of love letters. Among her most popular and most recent projects, we can find the production of “Article 12/The Spy Project”: it took her five years to produce it, by establishing close relationships with Dutch Intelligence. The result was an exhibition that invited to invert the relationship between the observer and the observed. Some of her works were forbidden or confiscated, but Jill was able to respond with interesting variations, ideas for thinking, and material that could be carried on with her project.

Then we find the personality of Evan Roth, a prolific author whose activity takes manifold shapes: teaching, collaborations, engineering, gif images collections, graffiti analysis, enrichment of public domain and development of tools for increasing the awareness of issues regarding freedom, networks and expression. Evan’s artistic production is focused on open source, pop culture and digital folklore on Web 2.0; it’s based, above all, on code and the Web because these are free tools allowing people to think, create and post a project in a few hours.

Evan is co-founder, along with James Powderly, of Graffiti Research LabFree Art and Technology Lab. The latter is a network constituted by artists, engineers, scientists and musicians whose goal is to enrich the public domain, by producing creative and technological works for research and development at the intersection between pop culture and free technology. Among its members we can find high calibre personalities such as Theo Watson, Aram Bartholl, Golan Levin, Kyle McDonald and Tobias Leingruber.

Its latest projects include: “China Channel”, a Firefox plugin enabling people to surf the Net as if they were located in China so that they can understand what Web censorship really means; “Occupy the Internet”, a Web virtual demonstration allowing people (even those who can take the streets) to express their opinion; and “Fuck Google!!!”, a series of projects produced during Transmediale 2010. 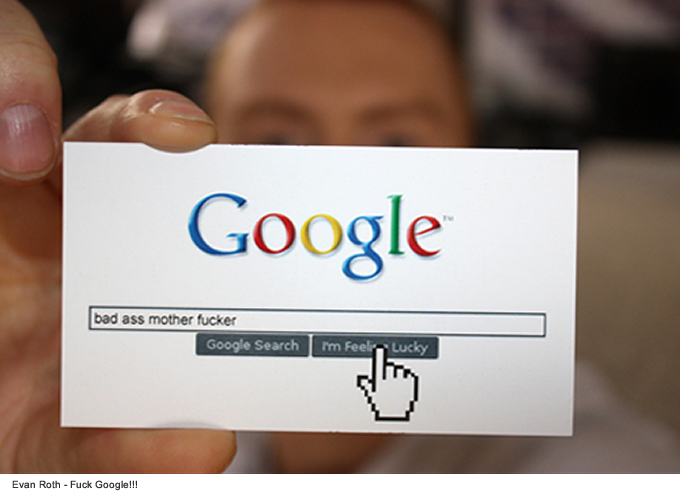 The Web is also the medium and subject of Constant Dullaart’s artistic production. He’s a Dutch artist who has his headquarter in Amsterdam and in Berlin, and whose name sound as an English sentence “constant dull-art”. His work consists in exploring the languages and images circulating on the Net now, and in changing their context.

These online projects feature Google pages that are in working order, but which manifest an anomalous behaviour like in The Revolving Internet , The Sleeping Internet and The Disagreeing Internet; internet physical recreations such as videos (YouTube as a Subject, DVD Screensaver and Performance), or sculptures (YouTube as a Sculpture) of distinctive YouTube elements. Dullart is constantly in search of new ways of using Web and looks for creative projects to subvert its rules.

One may smile, but throwing pies at people’s faces is a respectable activist practice with its own literature, so much so that Wikipedia has a whole entry drawing up a list of famous figures who were victims of this trick:: http://en.wikipedia.org/wiki/List_of_people_who_have_been_pied. Last but not least, Biotic Baking Brigade deals just with this subject: among their successes they can boast Bill Gates, San Francisco Mayors Willie Brown and Gavin Newsom, anti-gay preacher Fred Phelps, economist Milton Friedman, the Swedish King Carl Gustaf and the Canadian Prime Minister Jean Chrétien.

By following the writer, critic, actor and famous Belgian pie-thrower Noël Godin also known as “Georges Le Gloupier”, and his collective International Patisserie Brigade, BBB understood that media impact on these actions is definitely greater than the one acquired by other traditional demonstrations, thus succeeding in drawing worldwide attention to environmental and social causes such as: ecology, bioregionalism, tailor-made economy for humans and genuine gastronomy. 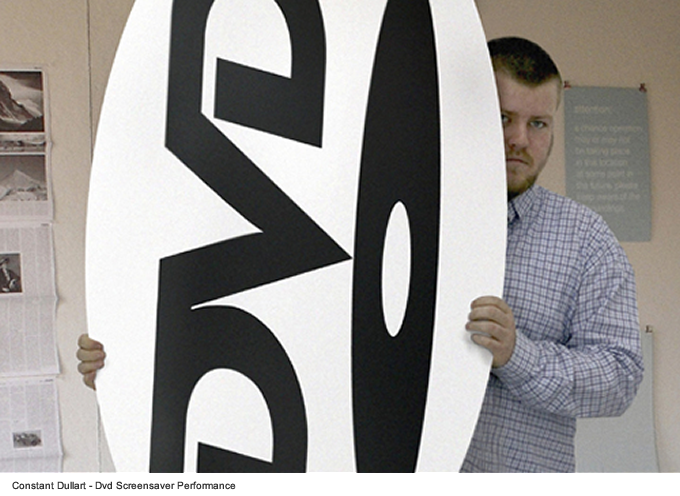 For the Barcelona cultural scene, which runs the risk of becoming more and more desolate in the near future, The Influencers festival keeps being a point of reference not only for local audience. Don’t miss this opportunity to spend three days of pure, unadulterated “clever” fun in the Catalan Capital City. For those people who can’t, you can always wait for the video posting of lectures and actions, which are in full added on the festival web page every year; and in the meanwhile, watch those of the past festivals. The Influencers obviously has a Facebook page and a Twitter account that allow followers to foretaste festival’s delights and stay updated on actions, recommended activities and on its guests’ adventures.