Inviting Horror: Join To The Fear 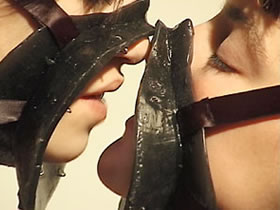 During this age of modernity or thoughtful modernity, how the sociologist Ulrich Beck define it, who has never tried fear? We live in the constant menace of global danger of high potential power, we are fed and exploited by power structures, who try to guarantee to their citizens a sense of safety, in exchange of a restricted individual freedom.

People who suffer of phobia project a mix of aggressiveness and desire on something or someone out of their selves, called phobic object. The subject experiment this someone or something as a menace for itself and point its aggressiveness on itself as defence.

The phobic object represent both the aggressiveness and the desire. “It is an hallucinatory object” explain the artists, “always fed by projection means, with whom the person that project them identify itself. A phobic object is formed both by the projected object and by the dynamic of the projection”.

Inviting Horror studies the application of this concept through the mediation of new technologies. From the minds of the scientists, of the innovators but also with the collaboration of the audience as well, we’ve seen new auto-supervisor techniques such as the surveillance shoe and the kissmask by Jill Magid, blood sample biometric as the Biochemical Portrait by Hermen Maat and phobic architectures, such as Agora Phobia Digitalis created by Karen Lancel.

Let’s see some of the projects presented at the Inviting Horror, considering the division in “desire phobia” and “aggressiveness phobia”:

Kissmask: The kissmask has been invented to be worn by two women. It’s composed by two masks, similar to the gasmask, positioned at the end of a accordion tube that links one to another. Inside the tube, there’s a microphone that records every breath, voice and kiss. The final effect evoke a cyberpunk scenery, as we feel the presence of a global menace but on the other and the need of sharing a tender private space. Just to remember that we’re human, after all.

Biochemical Portrait: A mistress wearing a white coat, behind a stand in a public place, cleans carefully a finger of a person, she uses a needle to prick it and then take a sample of blood. It seems a normal glycaemia test, but the computer that makes the analysis gives back the portrait of the person in that very moment. The artist specify that it is not important the meaning of the portrait itself. The situation evoke the fear of the forced blood sample, that could be used by the law and prefigure the frontier of the biometry used in the techniques of identification.

Agora Phobia (Digitalis): An isolation cabin situated in a crowded place, as a square. Inside found place only a person and a computer. Visitors are therefore invited to the auto-isolation inside the cabin, talking in chat with agoraphobic people (people scared by open spaces) or prisoners, forced by condition that develop social phobias.