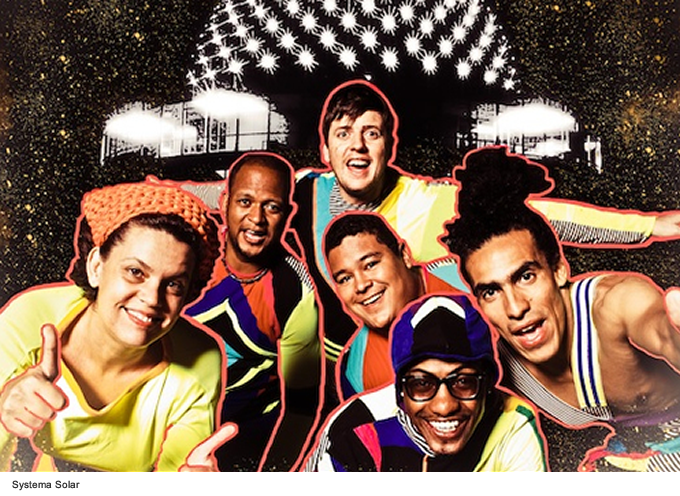 In 2007 the first edition ofMDE Encuentros de Medellín (the International Contemporary Art Festival of Medellín, Colombia), was opened with a band performance. A well-blended group composed by visual artists, sound experimenters, rappers and activists, who just a few months before – in 2006 – had joined their forces to work together in self-production field. This band mixes digital sounds with Afro-Colombian music tradition.

After its first and successful performance at MDE, Systema Solar – the group’s name – specified its organizing structure and defined itself: collective of audio-visual artists. Today, 5 years after founding it, I can firmly state it has become one of the most appreciated and followed band countrywide.

Beside its musical success (Systema Solar was hosted by Womax Festival just at the end of last October), the group’s history and design are also an example of deeply-rooted experimentation in visual arts (as one of the most popular group, Calle 13 of Portorico), in network culture and in socio-political activism. 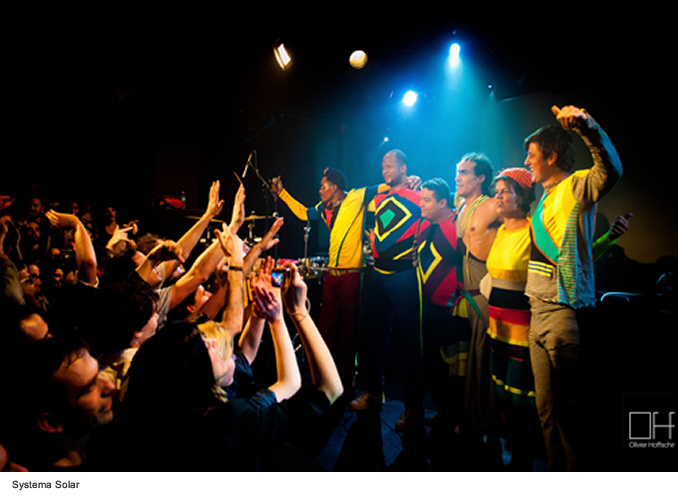 Its first public performance at MDE in 2007 symbolized the point of arrival of its research, started years before, and ended in the production (in the same year, 2006) of an independent documentary about Rap in Colombia: “FreKuensia Kolombiana” signed by Vanessa Gocksch and Walter Hernandez, a French-German visual artist settled in Latin America for almost two decades, and an activist and communication expert respectively.

This team work – created by each and every one of Systema Solar’s members – collected stories and accounts of nationwide musicians using words as medium of communication, digital technologies as production and independent tool of dissemination, and finally, recovery, of local music tradition (above all the African one in the northern coast of the country) and as key reference elements, to avoid becoming another cultural satellite of the US. “FreKuensia Kolombiana” is about the Hip Hop movement – whose origins must be traced back to street life and to underprivileged communities – , was distributed all over the country and used as means of self-representation and social revendication.

During the first decade of 2000 Colombia was a country in the midst of a civil war and of a forced and outward “normalization” process, wanted at any cost. On the one hand, there was a corrupted and conservative President: Alvaro Uribe, who in 2002 ascended to power by means of funds provided by his drug smuggler father (who had his backing of powerful people) and thanks to ruling classes’ support, who had all the media on the Colombian territory under their control.

On the other hand, a 30-year long guerrilla war (FARC – Frente Armato Revolucionario de Colombia), whose modus operandi consisted, and still consists, of using forms – already seen – of political conflicts now obsolete and too outdated in order to get a true effect back on a urbanized and globalized civil society. In the period going from 2002 to 2010 a wave of repressive violence hit the entire country by annihilating every opposing party of the Uribe government; it was paradoxically (violence against violence) based on the need to eliminate the violence resorted by guerrillas , in order to build a modern and democratic nation.

Trade unions and professors were the target of paramilitary groups, i.e., the illegal army composed by mercenary soldiers funded by Uribe in order to support his political plans. Peasant farmers living in war areas were a target too, because accused of fomenting FARC or other armed organizations, and for this reason, they were obliged to flee in order not to be assassinated by paramilitary groups (I’ld like to remind you the “Bocas de ceniza” video by Colombian artist Juan Manuel Echavarría who depicts this foolish violence, reflected then on campesinos’ faces). 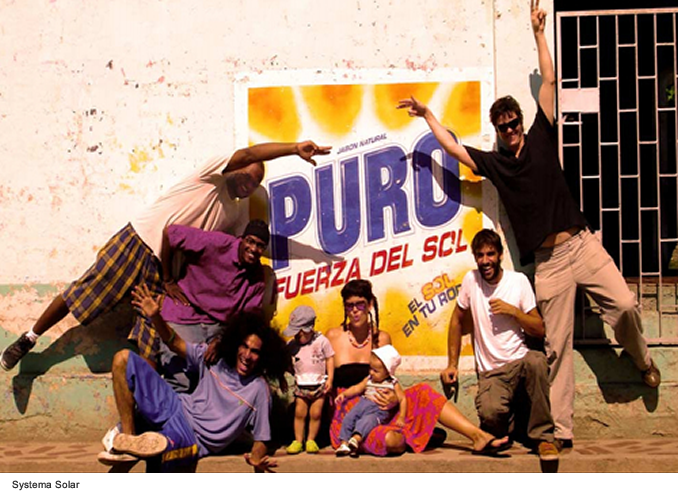 Even rappers became target of this wholesale war, aimed at eliminating anyone who independently provided counter-information. In fact, the Rap movement in Colombia, and in particularly the one in Medellín – known as one of the most violent city in the world, completely controlled by drug smugglers till the 90s – is very active and prolific, but since it gains support by addressing the subaltern classes, above all from the street culture, it’s still nowadays a target.

Taking into consideration the context I described, the production of an independent documentary like “FreKuensia Kolombiana” about Colombian Rap voices is a project with unarguably political repercussions.

The independence of the platform that produces it is by all means strongly political. I’m talking about a cultural NGO called Intermundo, which deals with education projects with a strong social impact. Among its projects are workshops on the creative use of basic technologies, video workshops, educational projects for children and teenagers living in villages in the Caribbean coast and workshops on DIY eco-friendly architecture, based on recycling for desplazados communities (that is, groups of people who had to leave their lands en masse to escape war, and now live in areas where violence does not exist at all).

There is also VoKaribe, the fully independent radio that broadcasts from Barranquilla, which during these months has been training people who’ll give voice to it. A voice of independent and community information in a country where media are completely under the control of power, is no light matter.

Systema Solar belongs to Intermundo’s projects; in the light of this militant approach as socio-cultural project, the very upbeat and exhilarating Electrocumbe music and crowds of spectators running to its concerts, are nearly pushed into the background. Systema Solar’s members come from different areas: someone from the Caribbean coast (strongly influenced by African music, as for example Soukous), somebody from Bogotà and others from Europe, after traveling the Latin American Continent like Pata de Perro/Vanessa Gocksch.

Everybody shares a fund of experience including self-productions, projects of independent communication, hacker ethic, and the use of technologies to create networks and provide education programmes. In 2007 the organization gave birth to Pixelazo – Laboratorio urbano de nuevos medios y redes creativas, the local version of Pixelache international festivals. 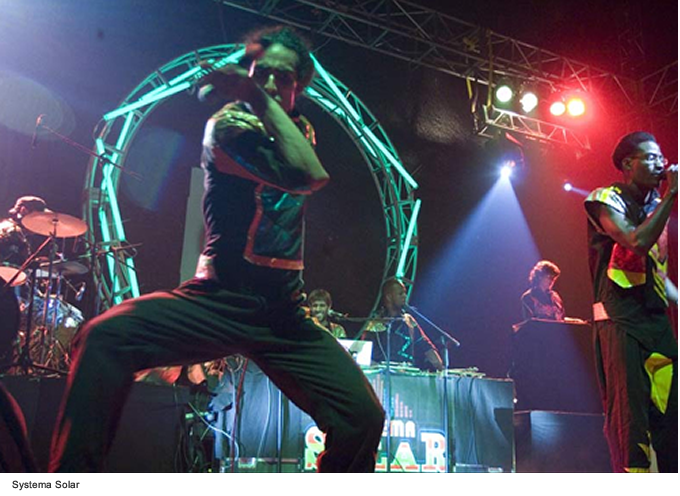 Every project created by Intermundo is designed in details to perfectly fit the Colombian socio-cultural context. The “Think global act local” refrain is actually embodied in the practice in any of its projects. “We live in one of the wealthiest countries of the world – it can be read in its organization manifesto. It is the second most biologically diverse worldwide after Brazil and is made up of a multiplicity of cultural enclaves […] the land is mostly virgin jungle and mountain; thriving with infinite natural resources and water […] With this in mind, as Intermundos we have always worked to highlight, acknowledge and strengthen local identity and the construction of autonomous projects and communities.”

Systema Solar is perfectly part of this view: its members have unanimously decided to take up residence in different towns in the Caribbean coast, from the cities of Santa Marta (a Caribbean and native town) and Cartagena de Las Indias, to Barranquilla (the most important maritime port of the country). This is an African, poor and chaotic region, where the social abyss between ruling classes and the poor is extremely horrifying: 5 percent of people with a Spanish surname own more than 90 percent of resources. The organization aims at being present in such a hybrid and different land influenced by imported cultures of passage.

The demographic situation mimic its music, the black and Africans in the Caribbean coast.Systema Solar is working on the tradition of this region, by drawing on the idea of pikò, street sound systems that organize parties inside neighbourhoods, and of berbena, the improvised parties of Barranquilla that gather hundreds of people in a outright Temporary Autonomous Zone. Colombian popular music tradition (Cumbia, Bullerengue, Porro, Champeta) is mixed with hip hop, techno, break beat and break-dance.

Systema Solar’s public shows are more real audio-visual performances than simple concerts: two singers/performers, musicians and DJs perform during a live cinema session with materials shot around the entire country. Systema Solar’s concerts are planned in great detail, including costumes, which are designed and made by the group’s members themselves. 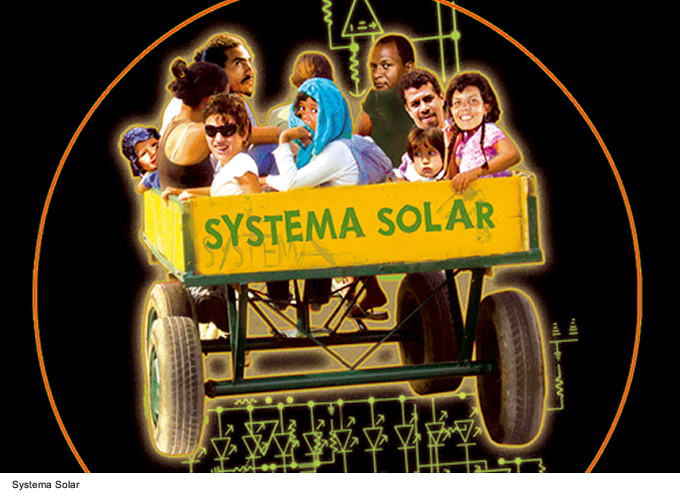 Systema Solar adds to the hip hop rebellion the strength of dancing in its liberating meaning and the idea that if revolutions have to take place, they must be the smiling ones, by finding in our origins the reason for changing the status of things, but also for loving ourselves and the context we’re living in.