From Cfu To Funen: Interview With Jakob Jakobsen 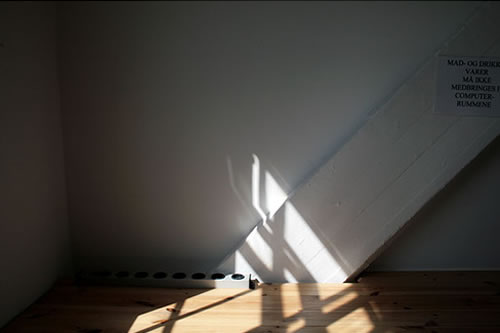 Last year you could have been walking in an Italian city piazza and suddenly find yourself among many people who were attending a University lecture. These actions were organised in order to take Universities and Academies out of their closed and consolidated norm.

Self-learning in Italy has taken on the form of a network, Uniriot, composed of students determined to create autonomous learning zones where they have time to re-elaborate their own training and intentions. It’s not just a proposal for the sharing of knowledge, as alternative to the institutionalised learning process, but also an opportunity to make relationships stand out among single entities, in the awareness of having to be present in one’s own social context, one’s own training and one’s own time.

This practice has involved the Art Academy , in particular in Milan . Artistic training in the past few years has been turned upside down mostly due to the Bologna case in ’99. The Academies were swept over by the idea of reform at zero cost. The curricula were transformed with the view to allow a more comfortable insertion into the workplace by making way for the system of study credits. The school taxes were increased exceedingly, weighing down on students, who are increasingly poor and ready to become the knowledgeable precarious workers of tomorrow. The connections with the economic production systems are narrower and more evident but the threat for the students of the loss of freedom is obscured by a false concrete possibility of working.

In April of this year a group of students from the Funen Art Academy , an independent academy in Copenhagen , did a tour of Italy with the objective of coming into contact with certain activist and underground Italian groups. Among the teachers who accompanied them was Jakob Jakobsen, a Danish artivist, who for some time has been involved and has elaborated practices for the liberation of artistic knowledge. In 2001, together with the artist Henrietta Heise, he founded the Copenhagen Free University, establishing it in his own apartment. This experience lasted 6 years and is what they themselves describe as being “self-teaching”. In this interview Jakob tells us about his present and past experiences as an activist and teacher.

Loretta Borrelli: What is your experience as an artist and activist in Denmark ? What is the difference between the Danish and international panorama?

Jakob Jakobsen: In Denmark we find a counter-revolutionary situation. Many efforts that lean toward the production of a non-capitalist way of thinking are under great pressure and in many cases are under direct assault. The attack on Christiania and Youth House are good examples of how alternative social structures are perceived, how they are considered as threats and this makes us understand at what depth the authorities are trying to exclude and eliminate modalities of alternative living and anti-capitalist ideas. But I don’t think there is anything different in the Danish situation, we find ourselves faced with the same brutal capitalist campaign that people face all over the world. The processes of valorisation are everywhere.

Loretta Borrelli: It seems that the objective of your production is that of liberating yourself from the capitalist production, do you think this is possible?

Jakob Jakobsen: Well, I don’t think that it’s possible to be free of capitalist production in this social order. We are all subject to the capitalist valorisation. The capital is living its ruthless life. But I interpret it as a prospective for my activity, to imagine a society without capitalist accumulation and without money as a determining factor in the relationship between people. I think my personal activity as a visual artist is to produce anti-capitalist ways of thinking, in a certain sense in line with the non-fascist life of Foucault.

Loretta Borrelli: Hai scritto: You wrote: “Precariousness has two faces: one is connected to insecurity and suffering and the other constitutes potential”. I also think that there is potential. What is the way to enhance this potential? Do you think art can create a new way of thinking and new social relationships?

Jakob Jakobsen: The potential that I refer to is the value of autonomy  especially in terms of autonomy of work. Work today is the principle control and valorisation machine that regulates our bodies. In particular, with cognitive capitalism, work is becoming an integrated network in our lives. To be able to survive outside of work is potential. But we must remember that precariousness in general is not a choice but is imposed on a lot of people. In any case I see a potential in developing new forms of autonomous life outside of work based on a minimal economy and the sharing of resources. This is what I intend as a positive side of precariousness.

Loretta Borrelli: In May 2001 you founded the Copenhagen Free University with Henrietta Heise, establishing it in your apartment. ABZ describes yours as a social activity, beginning with a unique statement: “We’re opening a University”. Then, at the end of 2007, you closed CFU. What value do you give to the experience of “Self-training”?

Jakob Jakobsen: rI believe that the different experiences of self-teaching must be seen in the historical and social context where they were developed. In our case, when we founded the Copenhagen Free University we found ourselves in a context of an expanding economy  before 9/11. It was a situation where capitalism was not yet militarised, which is what happened after 9/11 with the war against terrorism. Self- teaching, therefore, was based on a certain level of trust in the possibilities of autonomous self-management against the capital. It was in some way a “taking power”, without accepting the usual hierarchy between the norm and the alternative. With self- teaching we were challenging, we were “detouring” the norm, and the hierarchies were completely overthrown. We weren’t interested in working as an alternative institution, we wanted to take power. Alright! “All power to the Copenhagen Free University”.

If we think back now, the CFU was like a dream. In actual fact we were able to take power and found an institution capable of valuing non-conformist knowledge. We were principally interested in researching the construction of knowledge and the processes of valorisation, which with the development of the economy and knowledge and cognitive capitalism became increasingly normative. We tried to understand other forms of knowledge more deeply  knowledge that is created in the kitchen, in the bedroom, in daily life  and we used it in CFU as an instrument to maintain knowledge itself alive and fluid, by contrasting economical instrumentation that was growing in schools, in Universities and in research institutions. We insisted on knowledge as a relationship between people, like a social rapport, and so we were very critical about economical instrumentation processes. We worked on a series of research projects intent on valuing hidden or repressed knowledge. In six years of life of the CFU we developed 5 research fields: art and economy, feminist organisation, television activism, evasion and history production.

The war against terrorism, in the end, was a war against autonomy on all levels and in all shapes and sizes. As the repressive politics increased and passed onto the offensive side, the conceded spaces for self- teaching were scarcer, and soon they bean to disappear altogether. The political spaces of autonomy were pushed to the defensive side, and it became increasingly difficult to maintain the political potential of self- teaching.

Loretta Borrelli: What can you tell me about your current experience of teaching at the Funen Art Academy?

Jakob Jakobsen: At the end of CFU, it was interesting for me to work at the Funen Art Academy . Funen is an independent school financed by the State and the municipal administration, but with this administrative council of its own. It’s a small school, it only has 60 students. There’s a certain open-mind toward experimentation in the artistic education field, but it isn’t a self- teaching; you can say that you work on the edge of an official system of artistic training.

At the moment we are working on the studio independently from the model created from the Bologna case, and we are composing a study plan of 5 years outside the European system of credits. As for the work method, our programs work collectively and are oriented toward students. But the school and the students are unstable, after our decision to work outside the system elaborated by Bologna . The marginalisation of the schools and of the students that are outside the credit system is destined to grow, seeing as the system will be implemented to practically every school in Europe . To contrast this tendency we’re working on a construction of a network of independent art schools all over the world.

Loretta Borrelli: I realise that it is an enormous issue, but I’m interested in knowing what you think about the experience of teaching intended as a form of activism

Jakob Jakobsen: I must make a distinction between CFU and the Funen Art Academy. In the first we work principally on the research and the production of knowledge. The issue of distribution of knowledge was not based on a pedagogical method, but rather on the sharing of knowledge itself. At the Funen Art Academy the experience is hybrid. As much as I work collectively, in the subjects I face, I always do politics. The students of the Academy, on the other hand, generally are not politically active, but what I try to provoke is an awareness of political implications of artistic activity. Some students have a good political awareness, and I, especially in the relationship with this group, try to work outside the school, creating a rapport with the urban and social contexts of the city where the school is located.

Loretta Borrelli: In the past few years in Italy , there have been self-training experiences, but in institutional environments. Do you think it’s possible to continue self-training in such contexts? Or must an experience of self- teaching be created at the same time? Do you think that self-training and self-teaching are the right way to escape the productive logic on the context of the economy of knowledge?

Jakob Jakobsen: I believe that self-training is always necessary, because institutions are never capable of giving sufficient or adequate knowledge. Even the “progressive” institutions act according to the norm, and so the only way out, for the schools, is to decentralise as much as possible. I think that the “good” institutional contexts should encourage and facilitate self-training between students  not like a medium for saving money, but as a medium to keep the institution alive. A part of the budget should be given to the students, so that they may manage the planning of courses, workshops and meetings. To ask students to assume the responsibility is perhaps burdensome, but in this way they develop their capabilities of self-management and sharing knowledge.