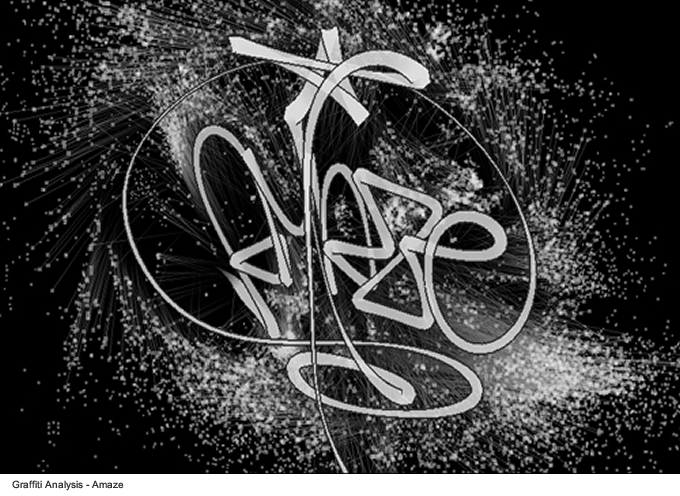 You do not need to be too familiar with the world of Writing ( or Graffiti to be more traditional) in order to know that the work made by these artists is essentially momentary. The materials used are temporary, they usually get painted over as a sort of punishment for this violation, all of this puts graffiti at risk.

If it is true that since the beginning of this phenomenon numerous photographers and video makers, have tried to slow down the extinction of Writiing, it is also true that their tentatives were limited. This is probably what pushed Evan Roth to create a new method, which offered graffiti artists to archive and store their work and their tags.

Roth has distinguished himself in the past, thanks to the Graffiti Research Lab, which created a union between Writing and technology. Crossing limits and pushing themselves in order to avoid degradation. Infact using the L.A.S.E.R. tag or LED throwies, the colour sprayed from the spray can has been planted by the light.

This is an important step because it indicates a step forward and a great difference compared to the past. 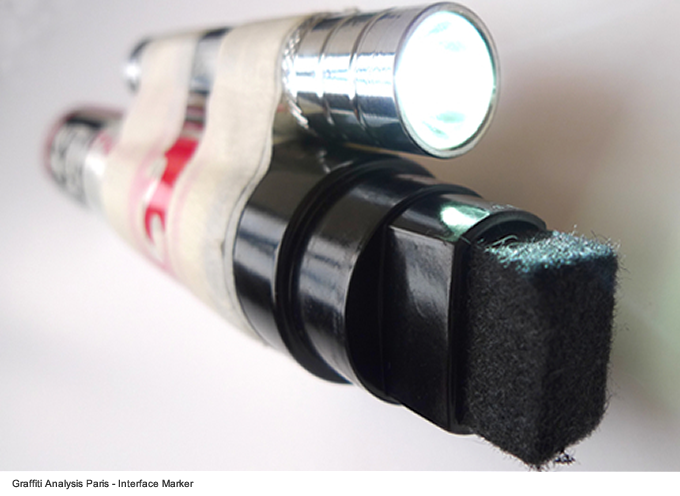 After an optical reading joined with a software, for the registration of data based on its’ position, the project Graffiti Analysis came to life. It was spotted at Paris, where it was presented during the exhibition Born in the Street brought by the Cartier Foundation. During this occasion it was possible to see how the kinetic analysis of a writer’s personal tag was infact formed by numerous dots.

This software is capable of following hand movements, and most importantly copying them, therefore registering and saving thousands of tags and allowing the first kind of documentation for graffiti artists. Not only a step in documentation but this also allows the possibility to focus less on the final result and try to understand the “modus operandi”, or in other words the way of creation.

In order to understand what the starting points of the project are, what are the differences between the other methods of file storing and what the possible consequences may be, we spoke directly with the creator of the project.

Claudio Musso: Lets take it from the beginning. Why did you decide to call this project Graffiti Analysis?

Evan Roth: I called the project Graffiti Analysis because I wanted it to be clear that what I was doing was not graffiti, but was rather a study of graffiti. Because graffiti is so ephemeral, it is a practice that has an interesting (and long) relationship with documentarians ranging from Martha Cooper‘s Subway Art book to Chalfant and Silver‘s Style Wars documentary to the thousands of users on photo sharing websites like flickr.

I love graffiti writing and I have a lot of respect for graffiti writers so the name is intentional to indicate that my experiment into graffiti digitization was not an attempt to create graffiti, but rather to document and archive it in a new way. 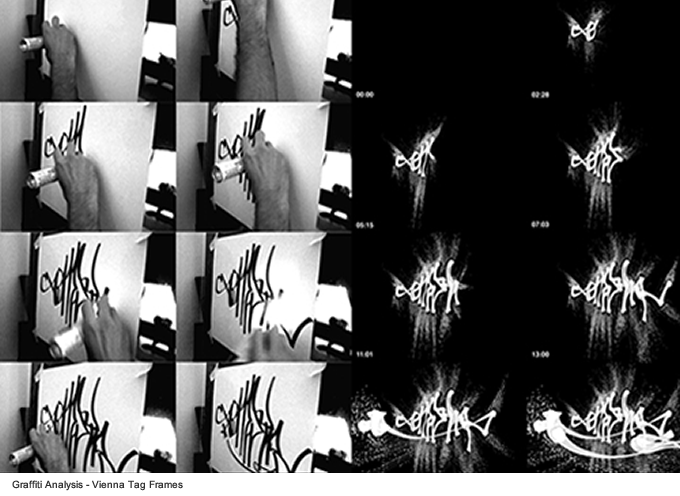 Claudio Musso: As everyone may know, and as you reminded us, graffiti works of art are not permanent. The way of scanning and storing these writer’s tags, could take us to the bigger picture, a safe and reproducible archive for Graffiti Culture. What role did the registration play in the development of the project?

Evan Roth:On one hand there is an inherent flaw in archiving graffiti because seeing a photograph or movie of a tag is never the same as coming across the real thing in the city. That being said, it was seeing movies like Style Wars, books such as Subway art, and websites like Banksy’s that really inspired me early on and played a major role in my interests in researching graffiti.

So part of my interests in digitally archiving graffiti motion is to inspire others the way it has inspired me. Another personal goal for me in developing a database of graffiti tags is to build collaborations in the present (as opposed to simply archiving tags for the future). I believe computer hackers and graffiti writers have a lot in common and hope to encourage the two communities to work together.

Claudio Musso: Writing, as an artistic practice, is historically based on some fundamental categories like speed, precision and movement. If the software used for Graffiti Analysis can keep up with the first two, is it possible that it can be able to reproduce the movement? And if it actually works do you think that it is possible to place it side by side with a “canonical documentation” either photographical or video?

Evan Roth: Yes, this is a good point. The Graffiti Analysis application visualizes the motion of graffiti, which often is quite different than the ink that ends up on the wall. The thickness of the line as represented in the Graffiti Analysis software reflects speed rather than any of the physical properties associated with the marker tip. The faster the writer moves, the thinner the line becomes.

Another example of the difference between the digital visualization and the ink is that the software also records non-drawing movements, such as when the pen is picked up to move from one letter to the next. When I meet with writers to capture their tags using the Graffiti Analysis system, I always keep the resulting ink and paper so as to compare it to the digital representation. 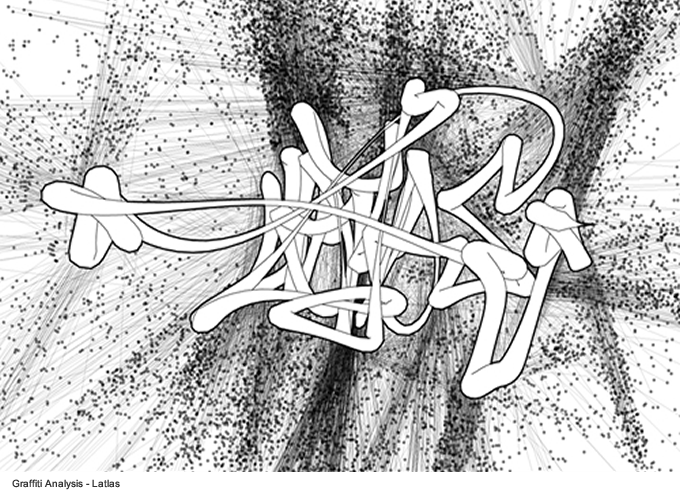 Claudio Musso: The significant difference between the classical picture of a tag and the digital analysis, which your project offers, is in the fact that you try to imitate the third dimension, which is the movement. The break-through of 2D took place during modern art, like during the second wave of Graffiti (during the 90’s). In this way, do you think that the technological progress will influence Graffiti?

Evan Roth: There are a lot of interesting uses of technology in the documentation of graffiti. Beyond software systems like Graffiti Analysis, online social systems such as blogs, forums and photo sharing services are still relatively new developments that are a major shift in how people learn about graffiti. But in terms of advancements in the practice of graffiti, and how technology is actually affecting the writing the on the wall, I think that the more interesting developments are chemical rather than digital.

The use of acids for writing on windows is a much more widely adopted innovation than anything coming from a computer. Graffiti is always an arms race between writers and the city, and for several years now acid etch has remained a relatively non-buffabel medium for graffiti writers.