Cae: The Spectre Of Plague. Biological Warfare, Politics Of Fear 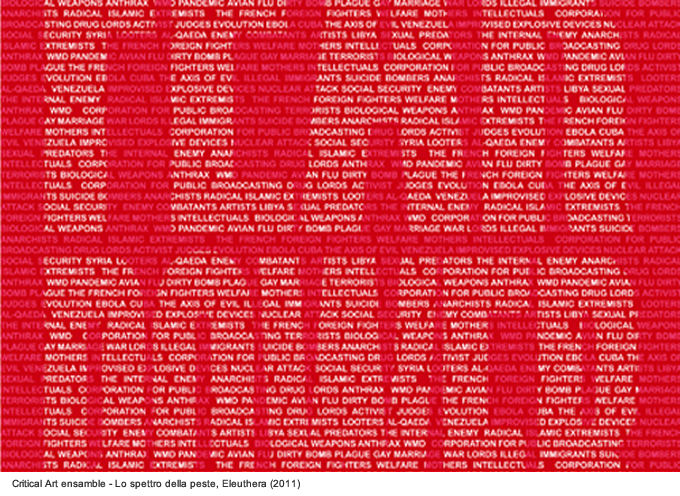 If we can affirm without hesitations that the late twentieth century was characterized by a great scientific and media interest in molecular biology, at the same time we can affirm that the past decade has featured a political debate focused on fears generated by the employment of genetically-modified organisms in the field of biological warfare.

After 9/11 attacks, the American Government has been a protagonist of such debate taking advantage by the exploitation of the general fear. Critical Art Ensemble collective is the artistic group that more than anyone else has tried to put the public opinion before the fears generated by growing transgenic plants or phantom biological disasters. The activists taking part to the project did it through both scientific instruments (producing real objects embodying those fears) and information offering an alternative solution.

A few months ago, Lo spettro della peste (Elèuthera, Milano, 2011) was finally released in Italy (under Copyleft Licences, to copy and freely spread the contents of the book). It is the translation of the historic Marching Plague: Germ Warfare and Global Public Health, published by CAE in 2007 for Autonomedia. 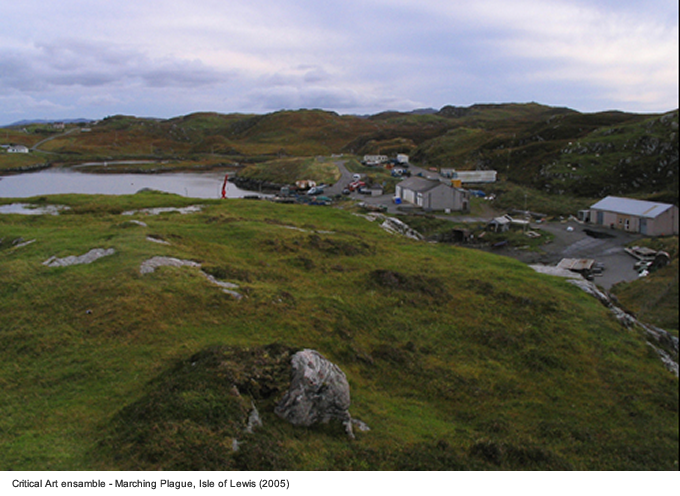 In this book, CAE members explain how the Bush (and not only) administration has used germ warfare for economic purposes. The threat of attacks with such bacteria-based weapons, called weapons of mass distraction, is just propaganda exploited to divert attention from the real health emergency around the world and justify the investment of public funding in war industry. That’s a new perverse way for military economy to raise money without control.

The collective clearly explains the logic implied in this kind of behaviour: “[] due to a paranoid fantasy, a new technology is conceived and accomplished in order to protect people from that very paranoid fantasy […] So, the industry of “defence” has found a way to expand endlessly  as long as military deployments are able to conceive new threats, the industry of “defence” will keep on turning nightmare into reality on their own account” (p. 76).

The medium allowing such economic speculation is the growing fear of something barely known that is not a real threat. In the book, the Critical Art Ensemble relates detailed examples of disastrous research experiments in the field of biological warfare. They are historical events that CAE has reproduced in some performance/installation of Science-Theatre. In such activities, people are called to come in close contact with biological issues through devices and material normally used only in research laboratories. 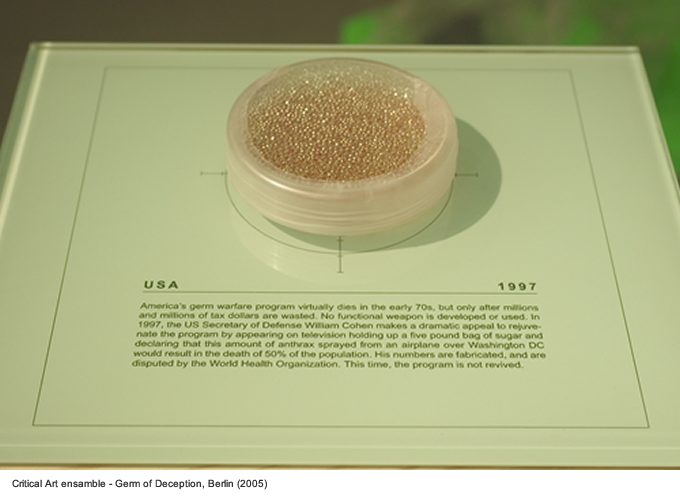 In Germ of Deception (2005) installation, people can see the documents of a biological research carried out by a US military group during the ’50s. Such research included the release of Serratia marcescens bacteria as a simulation of a biological attack. Obviously, those were harmless bacteria.

The U. S. Department of Defense considered it as a successful test. They neglected to mention that 100% germ coverage does not translate into 100% infection rate which does not translate into 100% mortality rate. Anyway, Generous amounts of money quickly were devoted to the research over biological weapons, while in 1932 the Pentagon stated that funding such tests would just be a waste of money. That kind of weapons was considered counter-productive, unstable, and hardly successful.

In 2007, during the Target Deception action, the members of Critical Art Ensemble repeated the experiment releasing the bacteria in Leipzig, Germany. Through such kind of actions, called The Marching Plague (2005-2007), in the Isel of Lewis and Leipzig, the collective recreated a bacterial attack releasing genetically modified bacteria in the environment but without causing any danger to local flora, fauna, and people.

Such an activity of counter-information, aimed to destabilize the political power and regain autonomy and freedom of thought, caused a lot of problems to CAE members. Geneterra, a performance of theirs that took place at the Washington University in 2002, gave them great concern. CAE was trying to draw people near to the scientific process the creation of new bacteria is based on. People were given the chance to apply such process just taking a blood sample. After a brief training, the partakers themselves could choose whether to release or not the bacteria. 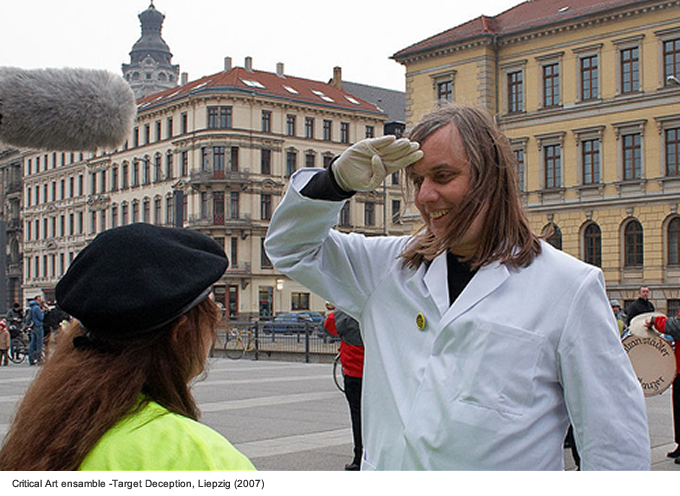 Notwithstanding such bacteria die in the air, the University biological safety committee forbade the release due to the possibility of infection spreading. This demonstrates that unjustified fears stem from scarce knowledge about biological processes. The partakers had the chance to face the complex issues linked to biotechnologies in order to discover what is right or wrong.

For CAE members the difficulty to work on issues that hit raw nerves of public opinion and enlarge the distance between science and media became increasingly real previously to The Marching Plague, when many actions were taken against some of CAE members.

On May 1st, 2004, Hope Kurtz, a member of CAE, died at home for a heart attack. The police, called the FBI alarmed by the presence in his home of biotech material displayed in museums and galleries all over Europe and North America . The day after, Steve Kurtz, another CAE member, was arrested and illegally imprisoned for 22 hours. He was accused of bioterrorism by the FBI and the anti-terrorism Task Force. Steve Kurtz and Robert Ferrel, a CAE collaborator, have been defending from the allegation of tax fraud for four years. They have been acquitted from every charge, but such litigation slowed down CAE’s activity and the release of the book by Autonomedia in 2006.

Nonetheless, CAE members keep working with the strong convincement that more complex issues exist in the field of research that can only be unveiled by a challenging biology. Fear and lack of information do not allow awareness. It is crucial to eradicate such fears through a new kind of information free from the bindings proper of a specialized knowledge. The US collective itself affirms to have no proof about where such kind of protest can lead to. Anyway, the only way to avoid the others to make decisions for us is being critical. 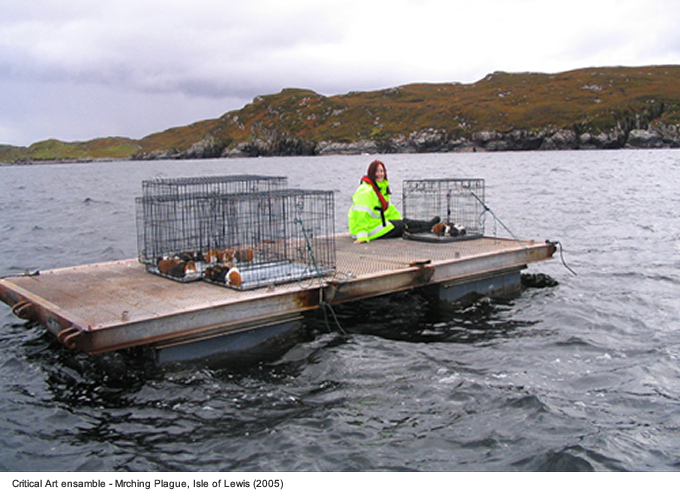 That’s the reason why people have not to expect striking solutions from this kind of book. The book does not try to find an answer to the planet’s great health emergency. People can appreciate the critical analysis on the authoritarian-capitalistic system that only obeys to principles like effectiveness, usefulness, and practicality. The same system that is blind before the waste of resources in military research killing millions of people dying around the world.