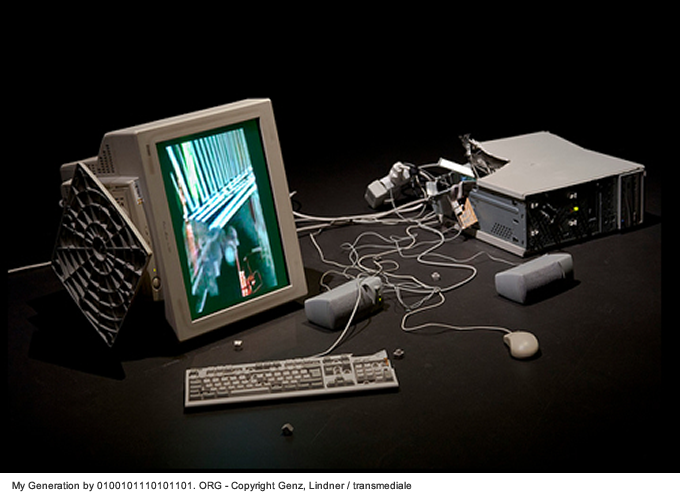 Kristoffer Gansing had already anticipated it, during the interview last December to present the 2012 edition of the Transmediale Festival, which he was getting ready to direct for the first time: “We conceived the idea of the show as something possibly different, both from the exhibitions of the previous years, or more generally from the classic format of a media art exhibition.”

I must say that “Dark Drives. Uneasy Energies in Technological Times” curated by Jacob Lillemose, has largely complied with these resolutions, which I perceived as a pretty interesting purpose, and brave in their way, for a festival like the Transmediale, an event deeply rooted in the media culture, on an European and international level.

“Dark Drives” was conceived as an exhibition substantially different from a classic exhibition of media art: not just a spectacular collection of the latest works of multimedia artists, not at the same time a forced attempt to insert pieces of digital art inside the expositive and expressive dogmas of contemporary art, but rather a real cultural / artistic path able to reflect on possible points of contact between the worlds of culture, art, media, technology, yesterday and today. 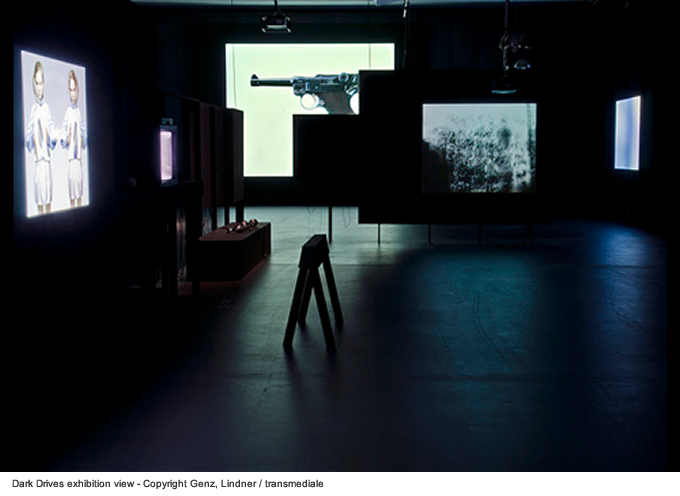 In this direction a great work has been done on the arrangement system. From my point of view, in contrast with what can be considered one of the weaknesses of the nonetheless interesting exhibitions of the past years, this year the layout was designed in a very accurate way both on an emotional and also experiential point of view.

A room furnished as a dark womb in which to enter and enjoy a sense of loss, however only apparent, which can fade when curiously walking between the exhibitions (finally illustrated by appropriate boards and not left lose to the viewer’s freedom of understanding): what has emerged fairly clear, is how the interdisciplinary aspect of the same idea of the exhibition can reflect itself in a similar dynamic of possible explorative routes between the over 35 works, collected for the occasion from different historical periods and areas of artistic research.

In the absence of a proper direction, helped in this by the neutral and malleable architecture of the exhibition hall of the Haus der Kulturen der Welt, the exhibits could be comfortably viewed by following always different trajectories of interest, but always with the feeling of a strong sense of correspondence between them. In the words of Marialaura Ghidini on Furtherfield: “…the amount of artistic and cultural material on display in the exhibition and the trajectories that it opened were broad to such an extent that Dark Drives functioned more as a general narrative survey than a show with a clear proposition.”
http://www.furtherfield.org/features/reviews/transmediale-2k12-incompatible

“Dark Drives” presented itself as an exhibit so fiercely interdisciplinary and really able to “bend” the language of media arts to wider cultural codes, shared by today’s society, alternating with the right amount of humor and curiosity pieces of net art and classical software art, displayed in accordance with the typical code of contemporary art with materials in video footage, where they have found space for decades, without forgetting to mention video clips with a more pop style, mechanical and sound installations, photographs and materials captured from the network, classical documentaries, many of which are shown for the first time in Europe.

Works that have highlighted the ambiguous and unbreakable bond which binds man to the technology invented and used by himself: an ambivalent relationship, as suggested by the editor Jacob Lillemose, of love and hate, we might say, often unpredictable in its most extreme reactions, equally often fallacious in the possible error boundary, curious about undiscovered and unexpected behavior, sometimes harbinger of extreme reactions to the limit of frustration and anxiety, definitely innervated by normal instincts and social policies that guide the work of the artists exposed. 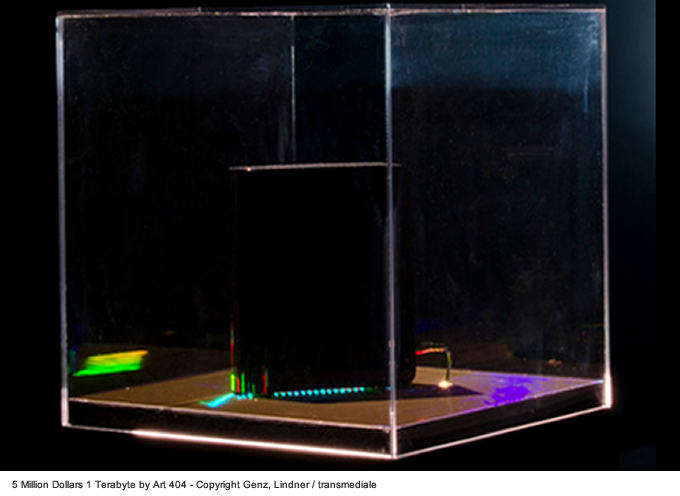 A not so easy relationship, full of emotional and physical contrasts, that reflects and is reflected in the 2012 edition of this general concept of transmediale: “in / compatible”. As the same Lillemose Jacob says: “On the one hand, uneasy energies can be said to produce the in/compatible, while on the other hand the in/compatible can be said to produce uneasy energies. The two form a circuit of mutual exchange. The question of which one of the two comes first and determines the other is beside the point.”

I must say it is quite difficult to make a selection of works exhibited. Remembering the way I have moved between the works when I visited the exhibition, the focus at the entrance was (deliberately) catalyzed to the work My Generation by 0100101110101101.ORG a small jewel of consistency with the general concept of the show itself. The work highlights, in a video collage of materials captured from the network, the conflicted love-hate relationship of the new generations of kids towards videogames. A classical relationship of dependency, which can give great joy but also a growing sense of frustration and anger towards the object loved and possessed. A work definitely surprising, that can catalyze attention of its strong – but at the same time ironic and ambiguous – nature, footage of the material collected by Eva and Franco Mattes.

The network is still present as a reservoir from which to get images and experiences in the work Photos of e-waste found on Flickr by Jack Caravanos and Vibek Raj Maurya, slideshow of photographs (some amateur, some professional) that testify the existence, mainly in developing countries, of huge dumps of technological material (mainly computers and mobile phones) thrown away often too quickly and too lightly, by the rich Western countries. A visually powerful document, which does reflect on important issues such as overproduction of the consumer market of technological goods, as well as the environmental and human lives tied to the dynamics of disposal and recycling of electronic components that comprise it. 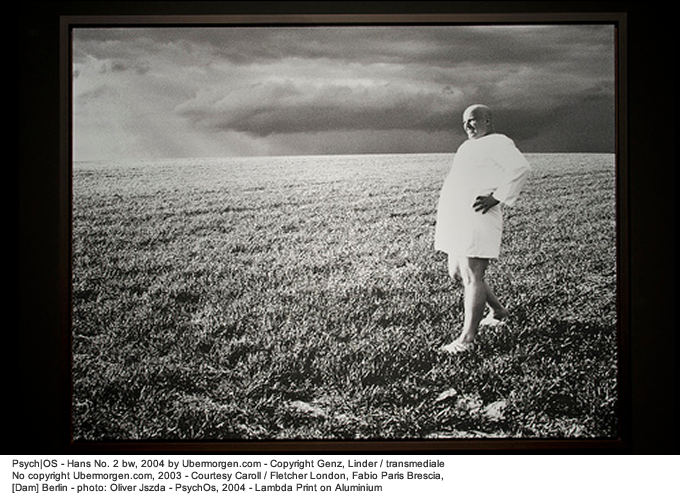 And yet, perhaps a little left to itself in its monolithic being static, the work 1 Million Dollars Terabytes by Art 404, is a hard disk on which were saved 1 Terabyte of softwares (from AutoCAD to video games to audio books) without license, corresponding to a market value of $ 5 million. Other expositions with strong impact were the works: Armed Citizen by Daniel García Andújar, slideshow of pictures of guns that can be easily purchased online, and the TV documentary Web Warriors by Jay Dahl, Edward Peill and Christopher Zimmer, which maps the complexity of new conflicts in cyberspace between attacking and defensive strategies against the backdrop of an increasing “paranoia” of digital security.

It was this works which has led me to carve a parallel path to the exhibition, going to more closely explore the works based on the video element. Over all, for its historical importance and unmatched beauty, the work In search of the castle by Steina and Woody Wasulka, Cut-Ups by William S. Burroughs and Antony Balch and Media Burn by Ant Farm. The first, an amateur video of some industrial suburbs in the United States, “disturbed” by electronic signals that can create overlays, distortions and visual hallucinations accompanied by the respective resulting sound, in the wake of the experiments on video technologies which have accompanied all the career of Wasulkas.

The second, a fast-paced visual montage of footage material filmed by Burroughs and Balch between Paris, Tangier and New York using the Dada technique of cut-up, characterized by the superposition in loop of sound elements on the words “Yes” and “Hello” with the specific purpose to discover the boundaries of an overlapping able to bring the viewer into altered states of consciousness possibly similar to those obtained with the use of psychotropic substances. The third, the video testimony of 1975’s spectacular “ultimate media event” organized by a network of local television stations by the collective Ant Farm: a Cadillac launched as a missile against a pyramid of burning televisions…

And more, the work by JODI LED PH16/1R1G1B, displayed at the entrance of the exhibition, is an array of lighted diodes that can be programmed to display images (moving or still) “with such an intensity to be also seen in the light of day” and able to “go directly to the retina of the public”, as the artwork’s description says. Psych | OS – Hans No.2 bw by UBERMORGEN.COM is the photograph of the now famous manic-hallucinatory trip of the hospitalized Hans Bernhard, happy and dreamy in the landscape of digital utopias. Error 502 404 410 by Marcelina Wellmer is on the other hand, a beautiful installation of open technology, where the viewer is placed in communication with the sound produced by 3 hard drives that continuosly stick depending on one of the three error codes of the title. 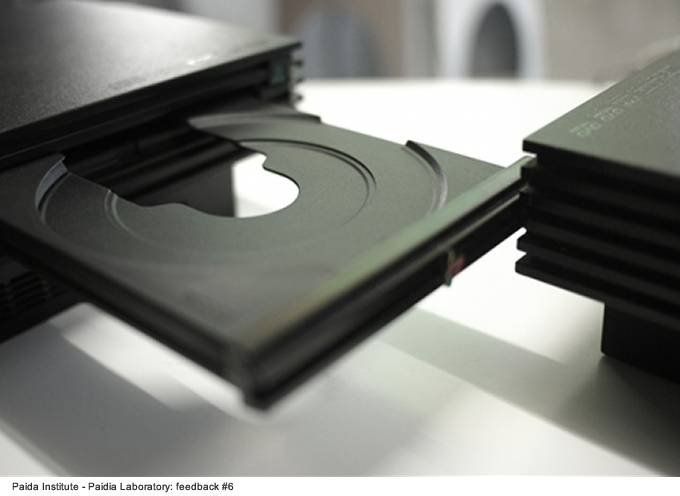 Here, the sound, of course in relation to the visual element, the last chapter of my personal journey of investigation of the exhibition: from Information Overload Unit, debut album of the SPK in 1981, on whose cover cover is depicted a man’s skull with a hole, surgically created, to reach the brain, the video Come to Daddy by Aphex Twin/Chris Cunningham’s award-winning firm , Pinknoise by Junko and Mattin, sound evidence of the possible fusion between the performativity of the warm human voice and the precision of the cold computer feedback.

Although perhaps it is perhaps Paidia Laboratory: feedback # 6 by Paida Laboratory the masterpiece of the exhibition, small and unexpected, that made me really think. A classic “useless machine”, in the pure tradition of Jean Tinguely and Bruno Munari. Two Playstation consoles, two symbols of contemporary society, with appropriately modified hardwares, that look and face eachother, look and laugh to eachother, just by opening and closing the input tray of the CD-rom.in a closed system of feedback. Like the HAL 9000 by Stanley Kubrick, feedback # 6 also shows us a technology that is slowly drifting, the irony in his statement of clear madness, spectacular in its being flawed and useless. What else to say….