The Total Artist. Arts Of Stage And Music 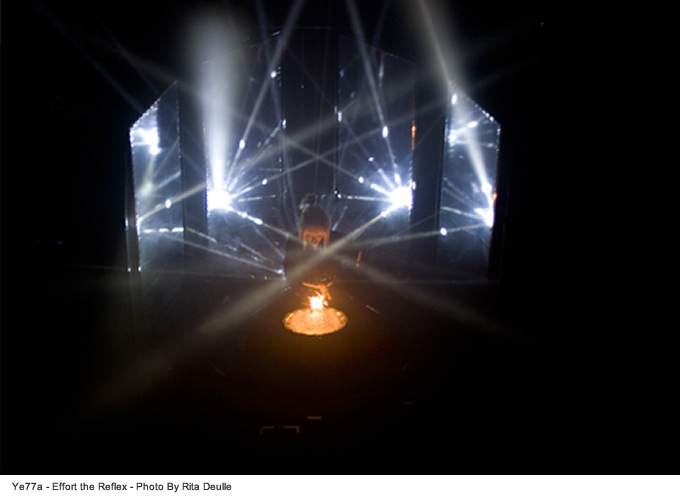 The Brain Soundtrack is a body of work, in development since its beginning in 2002. It is a trilogy of projects that its author, the Portuguese artist Ye77a (stage name), defines as “the soundtrack of my life”. The first project of the trilogy is called 4Play and the second one is Back & Forward. The third is still in its early conceptual phase. From the point of view of the audience, one is invited to immerse into a personal universe through sound, movement, light and image, into the illusion of an immersive experience, in some ways similar to the one of ”reading a book or going to the cinema”.

In the case of a book this illusion of immersion is achieved by connecting the vocabulary of the written language with the meanings suggested to the reader, causing the unveiling of an interior world. In the case of cinema, it is given by its context, the space, the darkness and the surrounding sound to provoke a focus on the audience’s experience. Conversely, the immersion perceived in The Brain Soundtracktakes several directions, the most important being the performative moment. The technological apparatus is here less relevant in causing this experience, which focuses mainly on the imaginative richness of the content. 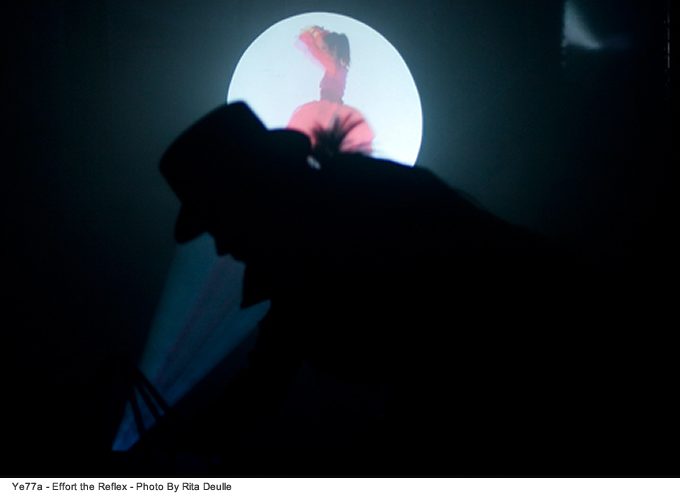 The work is visually and dramatically colourful with a fictional narrative revolving around the actions of two characters: Ruby and Shadowman. Scenarios and props are exuberant and surrealistic because “[they] subvert[s] reality as a basis for a very personal world to be expressed”. Danyella’s motivation for creating this long term, complex body of words comes from a necessity to understand herself through art practice. Her practice is interesting to investigate as it transcends the standard methods of creation and making implicit in live audiovisual performance.

In my writings I maintain a strong curiosity in exploring the multiplicity of connections within audiovisual practices. This text stems form a conversation with the artist and explores the complex relationships unfolding within the production of a long term solo project as a process of intimate reflection, where the role of the performance and the role of documentation have a specific significance.

The total work of art, as the composer Richard Wagnerenvisioned it, describes the connection of several artistic practices in order to produce multisensory experiences. Our contemporary practices are already expanding past Wagner’s ideas, either through the possibilities of the technological apparatus as well as through a changing perspective on what is art and what the audiences expect in terms of its fruition. 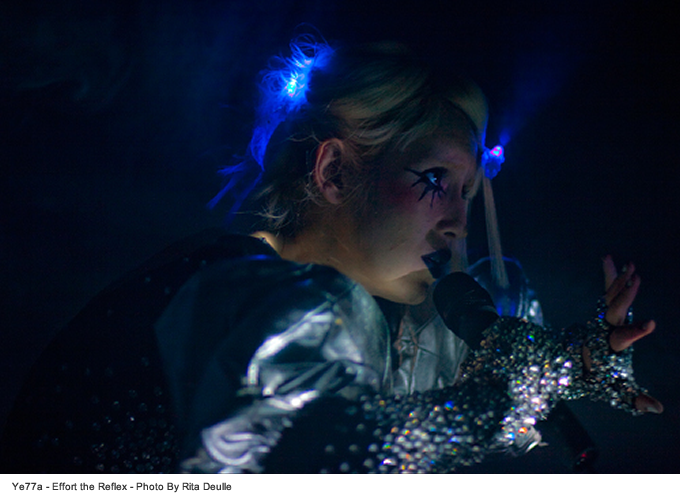 In this sense, The Brain Soundtrack (in both projects so far: 4Play and Backward and Forward) develops the multi-sensorial as a way to cause the illusion of immersion to encompass multi-skilled and multi-media conventions. Danyella’s way of producing is as a solo maker. In a context that welcomes collective creative making, and joint exploration of the possibilities of human knowledge – beyond Wagner’s ideas – she belongs to no school and does not consider herself as a professional.

Creating is a way to discover her own individuality, her personal rhythm, to further explore new skills and “a way to put all talents at use”. A symbiotic connection is established between the artist and her production. This connection is neither conceptual nor technological, but holistic. This implies a process “without obligations to make or to show”. This making encompasses scenarios, wardrobe, lights, music, make-up, set-props, sound and video capturing and editing, etc. Everything is turned into a vehicle of a message: for example, “the clothes have a specific meaning”.

Through clothing, the body, a moving sculpture, is transformed into a message. Both the light on the stage and the light of the videos, closely related to the scenario and the set-props, are interpreted as one compositional element, simultaneously an object, light in movement and means to reveal what is hidden in darkness. This ongoing learning-being-doing process is close to devotion, close to creating as a spiritual contemplation. It is a way to understand “what is going on here inside”. 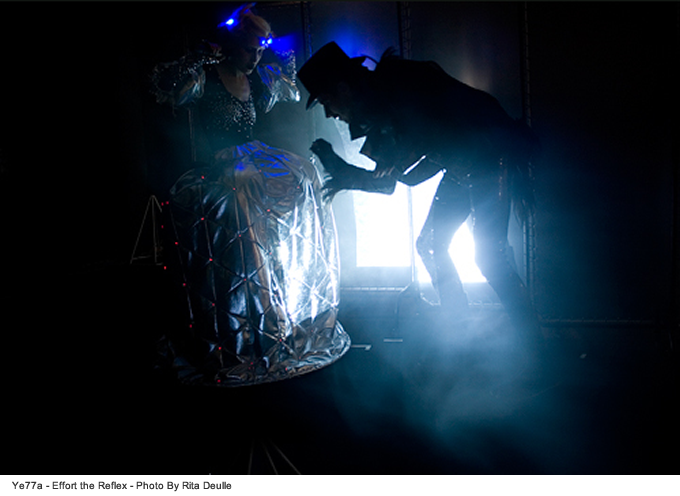 Performance frames the artistic action in the moment, the now, as an element belonging to the category of things that cannot be repeated. The moment is a unique experience for both the performers and the audience. Without the artist’s presence, a performance would be, for the audience, a mediated event (as is the book or the film) and without the audience it would be, for the artist, (perhaps) a rehearsal. Both artist and audience are required, in their more or less strict roles, to participate in the performative event. Through their presence, “materialization implies sharing”. The materialization as momentarily fixed point, which is not the same as an object, “is a way to communicate a message”.

An example is the unique expressive language of Pina Bausch, which is purely body expression and not verbalization. “There is no story in the way she expresses the particular sensibility of a woman and the fragile reaction of a man.” In the same way, the message transmitted by The Brain Soundtrack requires intuitive ways to be expressed that cannot be either written or spoken words. It encapsulates an “ideal and a feeling of happiness” and can only be expressed through a particular vocabulary created and developed by the artist (her own vocabulary): “the more abstract (less language), more expressive (through metaphor)”.

For the message to pass through, the vocabulary is permanently adjusted through the dialogue established between artist and audience during the performance. This dialogue is fundamental for the project to develop and is established through the layers of media that constitute the work itself. The relationship between these layers swings between fixity (a layer of pre-recorded material, which works as a guide) and a layer of live manipulation, which is improvised. In 4Play the layer of projected pre-recorded moving-image is fixed and the sound is played live. In The Effort of the Reflex the fixed layer is sound. 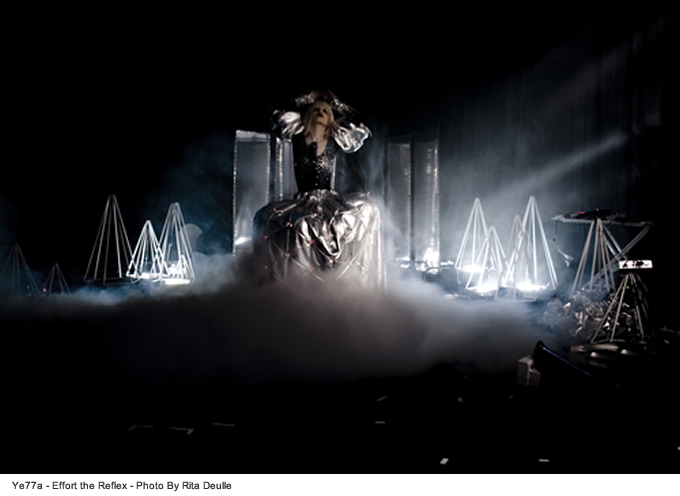 Therefore, the actors’ movement and live manipulation of lights constitute the live action and the live-communicative layer. This is a performance that “seeks the movement (of the muscles) and the melody”.

From the performative action, the story expands onto other fixed media, becoming fixed in its objects. The first project, 4Play, also consists of a sound CD with the same name, several videos available online and a short film. The second project encompasses a live performance presented as an opera called The Effort of the Reflex and includes an illustrated script, a film and vinyl called Silver Cord. The objects, independently from each other, originate from the performative action which acts as a sort of unifier. It makes sense to look at the two characters on the screen, Ruby and Shadowman, and think of Danyella’s words: “I am an artist made of plastic”. In Portuguese language, fine arts are translated as plastic arts.

Thus, when Danyella says she is made of plastic, she is embodying the double role of the artist and her aesthetics (“director of my own universe”). The idea of creating a complex body of work connects Ye77a’s artwork to the performative work of the architect Bob Wilson, with the cosmic philosophy of Sun Ra and his Arkestra, and to many others who devoted themselves intensely to their work, as is the case of the Portuguese Fernando Pessoa and Almada Negreiros. 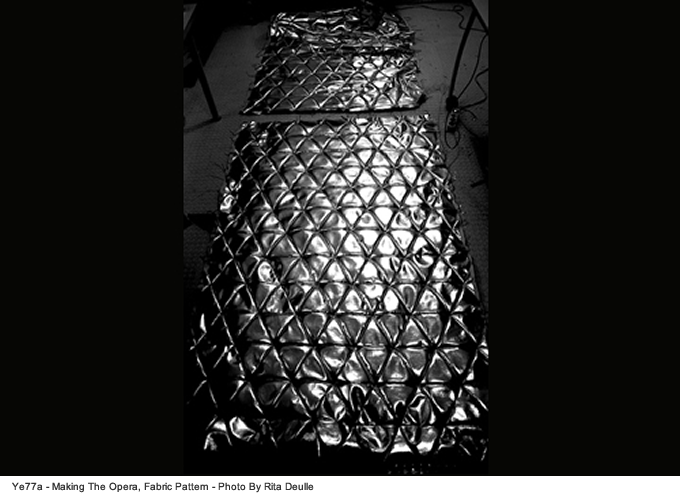 The artistic process itself is gradually becoming symbiotic with the artist whose final goal is to surprise. To Danyella, the exercise required to accomplish this goal requires courage. Perhaps the challenge is the true motivator for the effort put into such long term development.