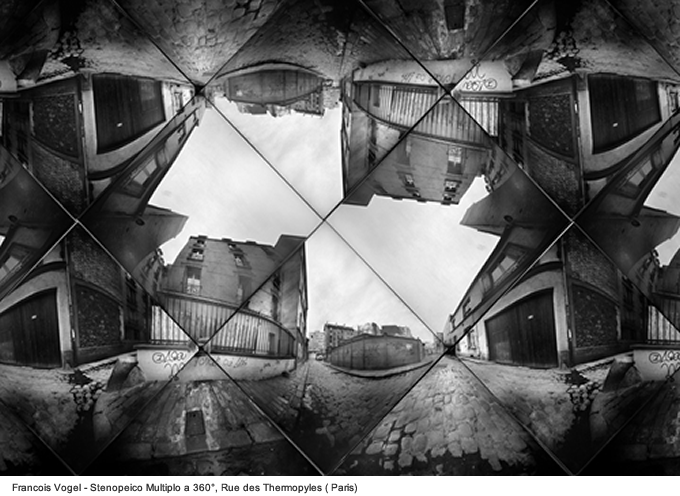 François Vogel is a French photographer and filmmaker. Each time he is defined in many different ways: “Baroque Wizard” of video [2], or “Cosmonaut of Images” [3]. He easily moves between the world of communication as well as the independent video scene by producing commercials, music videos and other award-winning short films known on an international scale. The latest Invideo Festival edition dedicated a retrospective to him [4], thus giving us an occasion to closely watch his extraordinary work, in which deformation and perspective dizziness are often used in combination with stop motion and time lapse techniques.

Among his famous works we can find the virtuous self-portrait Cuisine / Kitchen (2007) produced during a night dreamy breakfast, Stretching (2009), where the relationship with architecture goes through a sort of “urban gymnastics”, or Terrains Glissants / Slippery Grounds (2010), an eccentric travel journal where urban landscapes and unsoiled places alternate with each other through poetic stereographic projections.

In order to enter François Vogel’s visionary world, we need maybe to remember that fear and astonishment we felt facing, as kids, the deforming mirror labyrinth at the carnival fair. The experience of our distorted image, perpetually multiplied and seen from all perspectives, was an unstoppable vertigo hard to watch. Those wonders gave us some adrenaline fancy – for five minutes and a penny – of a 360-degree view, able to embrace the world by breaking the frame and finding its hidden out-of-view. 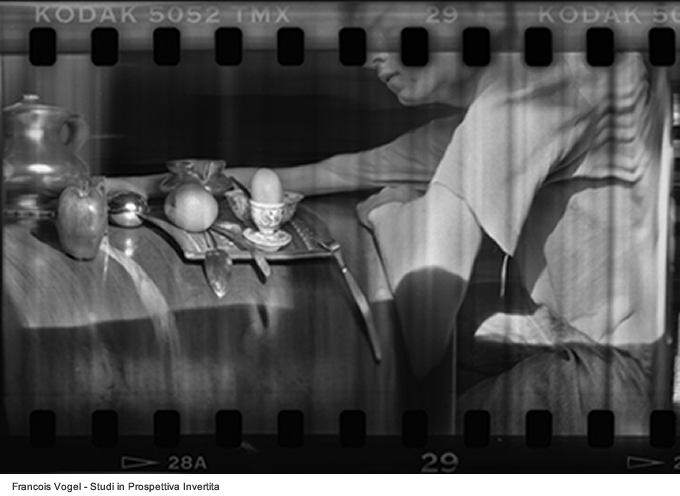 Something similar happens to the French artist’s visual research. Vogel tells us that when, as a child, he arrived along with his family in front of Notre Dame Cathedral for the first time, he fell to the ground, so that he could see as much as possible, “everything at once” [5]. It was that kind of collapse of vision that only the falling of the body, the abandonment of the upright posture and the front view are able to cause. Hence, he was still a child when vision and world representation were already something more than simple interest to him.

“It was a dream, a childhood dream”, he answers when I ask him about how his artistic career started. The passion for drawing takes him from an early age, not yet a teenager he makes animated films with his father’s super 8 camera, he meets and fall in love with the visionary works of M. C. Escher, who is still one of his main aesthetic points of reference, then, after starting scientific studies, which he left immediately, he enrolls in the Decorative Arts Academy in Paris.

From that time on, he starts testing many techniques in order to open reality to every possible interpretation: from pinhole cameras that he builds by himself, to the glass balls he uses for most of his video shooting, up to software for 3D modelling. As a researcher, inventor, image maker, Vogel uses plenty of devices. He is continuously playing with the representation of reality, in an attempt to take it to its most extreme limits, to expand it from within and to turn it upside down.

If much of his visual deformation reminds us of surrealist experimentation – and it’s no accident that the Czech film maker, Jan Švankmajer, is one of his favourite authors – we need to look into the baroque vision with its wide angles and anamorphosis, to find the aesthetic reason for Vogel’s research. [6] Here, classical perspective is brought into question, a challenge to representation is playing out, and imagination and geometric calculus combine with each other to create (im)possible worlds.

In order to understand his research, which has embraced photography, films, video and installations for twenty years, we need to start from the technique that is not only the beginning of his creative career, but also its true essence: pinhole photography. The just published book “A New Treatise on the Pinhole Camera”[7] gives us a retrospect where we can admire not only his photographic works of the first Nineties, but also various models of his pinhole cameras, along with detailed drawings for the preparatory geometric calculus of shots. 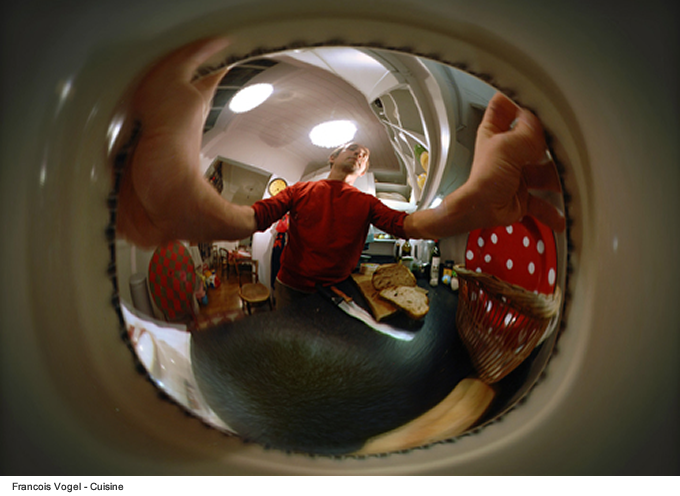 My conversation with FranÁois Vogel†starts from here, from this choice for photography without a camera.

Giulia Simi: The pinhole technique is based on the famous mechanism of the darkroom, invented centuries before photography, used by painters such as Canaletto and, according to recent studies, even by Caravaggio. Thus, itís an ancient practice that seems to be a charming anachronism in the hands of artists who have sophisticated software of image processing at their disposal. What does it mean to work with the pinhole camera?

François Vogel: Manyartists use it in their current works. This technique has never been very popular, maybe because it really has a ìprimitiveî, not technological, side. Itís a kind of Arte Povera into the photographic field. On one hand there is obviously an economic reason, a pinhole camera can be made using a shoebox, but, on the other hand, it also offers an alternative way to take photographs. ClichÈs canít be ìstolenî using this techniqueÖ You need to take more time, the duration of exposure is very long, framing is less controllable, you often need to move closer to your subject, and sometimes the device has to be put right on it.

Even from an aesthetic point of view, the grain of the image is different: image, in fact, is not evenly exposed. There is that kind of pinhole clarity: everything is defined from zero to infinity, but at the same time everything is slightly blurred. The thing I love the most about using pinhole cameras is that I can play with perspective. Rays of light shift in a straight line from the photo subject to the sensitive plate, by being filtered only through air. I find this sort of geometric purity fascinating. If you think about it, itís not very different from space representation technique in a digital environment.

At the beginning of 3D there was a kind of virtual pinhole camera capturing the scene, not just an optical system. Iím working a lot with software and I can firmly state that the way I digitally operate on images comes from pinhole technique. Many of my short films seem to be shot by means of a virtual pinhole method. † 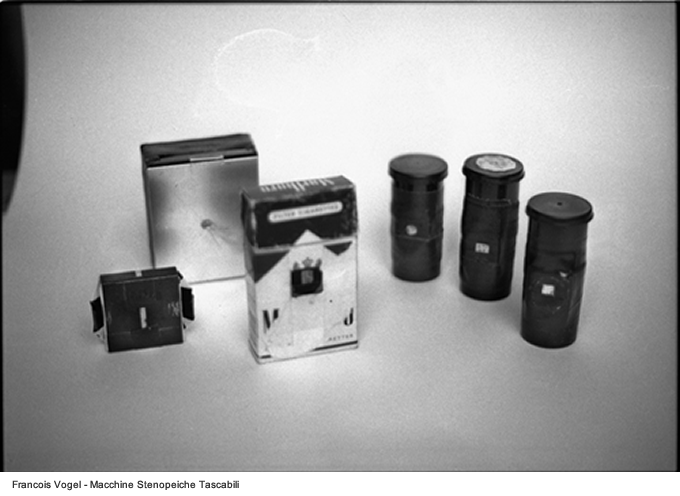 Giulia Simi: Shape deformation is a constant in your practice and through all your work. A careless glance might ascribe it to a great effort of post production, but, in fact, already in the techniques of shooting, and before precisely in the pinhole photography, your practice is deeply rooted in the body, the gesture, the handcrafted work, which allows you to prepare the scene and build the right tools to capture images …

François Vogel: Iím really charmed by those devices that allow you to catch reality and I especially love whenever an osmosis between the subject and its capture device takes place. For example, when I take a picture of a cactus, Iím interested in its circular geometric shape, and thus I imagine a tool able to give spherical deformation focused on the centre of the cactus. During my first photographic experiences I used to shape my own photographic tools to adapt to the photograph I had to take. The geometry of the subject oriented the one of my photographic device. In my shorts I often use digital technology, but I havenít forgotten how I used to build tools by myself. When I edit my images on the computer, I often get the impression that Iím modelling photographic plasticine! Itís like Iím massaging the sensor of my machine.

Even the shooting is made with future image deformation in mind. Often, since I work with ultra-wide angle lenses, everything must be very close: the character is very close to camera or to the video camera that, in turn, is very close to the scenery. The space is very condensed to the extent that things nearly touch each other. The scene can give a sense of ìcosmonaut of imageî effect. 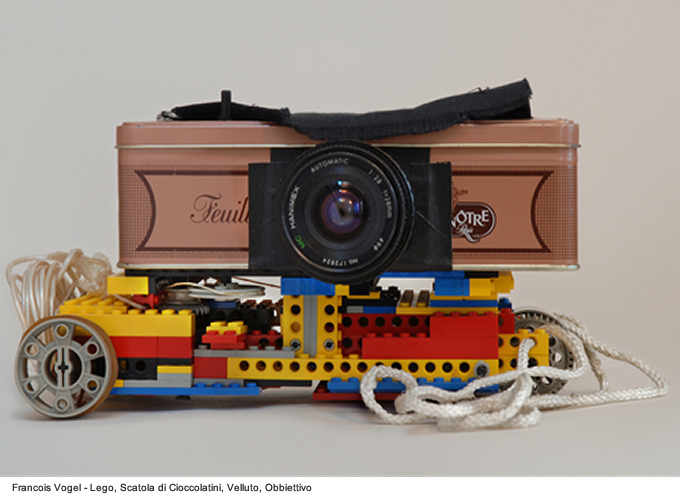 Giulia Simi: It’s just like what happens in Kitchen…

François Vogel: You’re right, Kitchen was made using a camera shooting the image of a kitchen, mirrored on a glass ball on top of a glass in the middle of my worktop. It was a whole single take: the camera took photographs every two seconds, so I was obliged to move much more slowly.†This allowed me to think about the right movements to make in order to place objects considering the post-production phase. We need to think that in a 360-degree shooting nothing is hidden, the out-of-view concept does not exist. This means that you must carefully check the position of each object and every minimal movement. ìKitchenî can actually be considered a sort of choreography.

Giulia Simi: Then, we must always interact with the space. The relationship among bodies, video/cameras and mise-en-scËne is constant. Itís a sort of ìmÈnage ‡ troisî as you described earlier, which is deeply embodied. Something like that also happens in Slippery Grounds, where you cross metropolitan spaces or places immersed in nature. Once again, the performative aspect is very stressed.

François Vogel: Sure. In Slippery Grounds there is a sequence where I cross the entire city of Manhattan by shooting from dawn till dusk for 15 hours without a break. The technique I used is almost the same as in ìKitchenî: I used a camera that was taking pictures at regular intervals, by taking a shot every three steps. Moreover, I had all my equipment for filming reflection through a glass sphere. ††

Giulia Simi: Thatís right. Your technique which, together with your wide-angle lenses, gives you the 360-degree vision, a key concept in your research.

François Vogel: Iíve always been charmed by reflections, even by those of bath taps. I like asking myself questions about how we represent the surrounding reality. We move into a three-dimensional space that later we transfer on a flat surface, like the image one. There are so many ways for making this transfer! And by now we know that there are more than three dimensions. 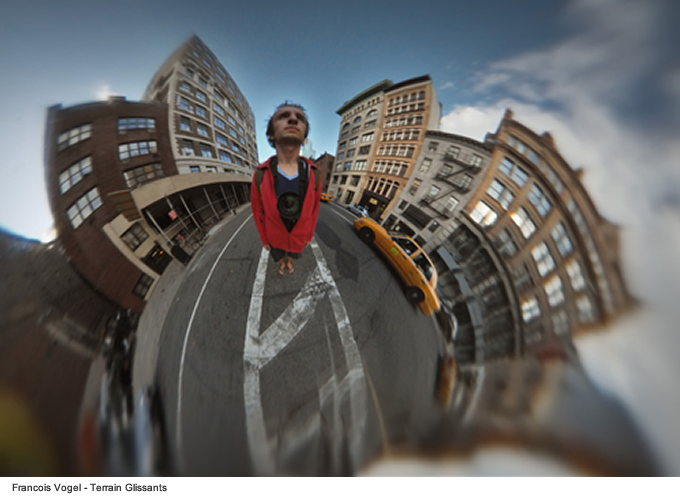 Giulia Simi: The last question is about your relationship with the advertising. Youíve actually produced a lot of commercials for mainstream brands like HP, Sharp, Lexus, in which you still succeed to experiment with interesting linguistic solutions. What kind of relationship have you established with the advertisement industry and how do you combine it with your artistic practice?

François Vogel: I really love my advertising job. It involves travelling, meeting people and it also allows me to shoot with big equipments and, last but not least, to finance my own works. But thereís also the other side of the coin, that is: you canít keep the product and this is frustrating. Then, this is a disposable art: it lasts a few weeks and then it sinks into oblivion. Sometimes, when producing a series of commercial in a row, and not being able to work on my projects, I feel overwhelmed by a surge of depression. Itís in that exact moment that I realize I must stop and go back to my own projects!

[2] – Jean-Michel Galley defined him in this way in his text “Nouveau Traité du Sténopé”, cit.

[5] – FranÁois Vogel himself states in the above mentioned interview by Donald James: ìIn the great opposition between Baroque and classical art as an author I take the side of Baroque.î