Thomas Feuerstein: Bio Deception, The Realization Of An Idea 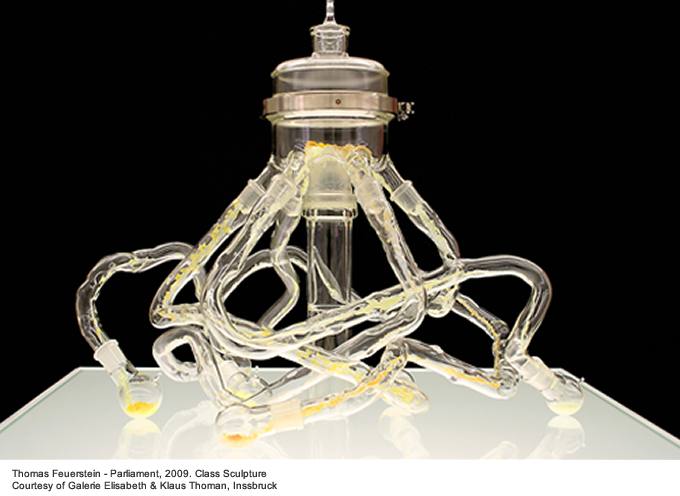 What does a bio-tech installation have to do with an exhibition about democracy? By walking through the latest exhibition at Strozzina in Florence, one realizes how disappointing it is to visit a forcedly “thematic” exhibition.

Within this place, a temple of journalistic style and ephemeralily, its narrative strength being audio-visual contents, it is surprising and even disturbing to run into the bare biological reality. Having Begun with cartoons, referendums and video charts, my tour stops suddenly before a very odd installation: an agglomerate of test tubes containing a strange yellowish substance. At first, I feel disoriented, since this thing has nothing to do with the show nor with the other works sharing the room with her.

The caption says the author, Thomas Feuerstain, aims to reproduce the interaction between individual and collectivity, in other words, our nature as social animals. However, I wonder how such construction could investigate the idea of democracy through the biological medium. 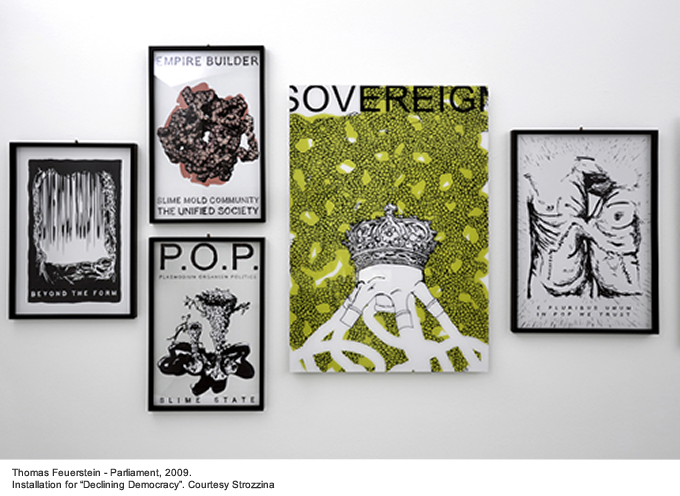 For your information, the object we are speaking about is a bioreactor, already seen in many bio-tech art works, from Sterlac to TC&A, and the substance within is a Physarum, a slime mold apparently capable to move at 2 km/h speed.

First thought: this artificial biological system is not autonomous, because it needs the intervention of human technology for its creation and conservation. We should keep in mind we have some responsibility towards living beings, be they mammalians or slime molds, especially when their existence, as in this case, only depends on “keeping a concept alive”.

Let’s get to the concept then. By means of living matter, Feuerstain wants to “reproduce” human forms of aggregation, our social systems and our political organization. In order to reach the nutritional substance located in the higher beaker, the mold’s cells may remain separate or even aggregate in a “biological whole” that should represent “human society”. My second thought, then, comes from the fact that the artist is merely “borrowing” an object out of a scientific lab and using it to describe an idea.

If the real meaning of this work is the search for a connection between democratic principles and biological events, then in this context political reflection utilizes science to create some kind of art. In this sense, even the relationship between art and (bio)technologies exists in a socio-political context.

This is an aspect to be kept into consideration when describing some recent bio-artistic practices. At the same time, for different reasons, it separates the work from its bio-tech art context, rather than draw the two things nearer 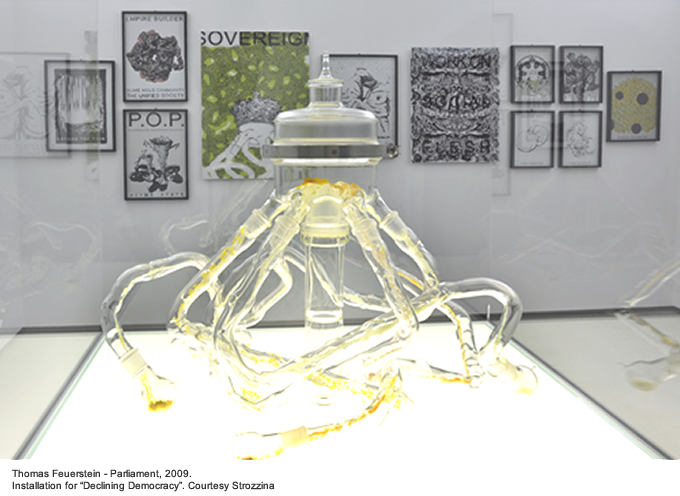 The utilization of bio-technologies and living matter, though it is often associated with its definition, is not always what defines the significance of the work. And no doubt this is what happens to this work. First of all, the fact that today bio-technologies lend themselves to creative use, does not mean that they are used in the same way by every artist, nor is it sufficient to “expose” them to create a bio-art installation.

Biotechnologies imply a wide range of processes and recall a knowledge that has a transdisciplinary nature: genomics, bioinformatics, robotics, proteomics, nanotechnologies. Such heterogeneous disciplines lead to different artistic result, sometimes distant from each other and not joinable under a unique definition, often conveying different messages and concepts.

One must take into consideration that bio-tech art, as Jans Hauser, one of its most known theorists, points out, was born to try and give an answer to questions of usage of biotechnologies and their effects on society. There are many artists who think social and ethical questions are fundamental in the field of artistic expression, yet in the bio-art field, even though such commitment is important, it is not underlined by all through spectacular (and questionable) works: some get very close, they representing it.

However, when talking about bio-tech art, there is an important distinction to be made between what is “metaphorical” and what is “objective”. It goes without saying that some practices have more to do with “science staging” than doing bio-technologic art. Speaking about Parlament, the staging is an end in itself. Such work has to be considered a “metaphor”, despite its biological part. By limiting itself to “formal invention”, it merely represents 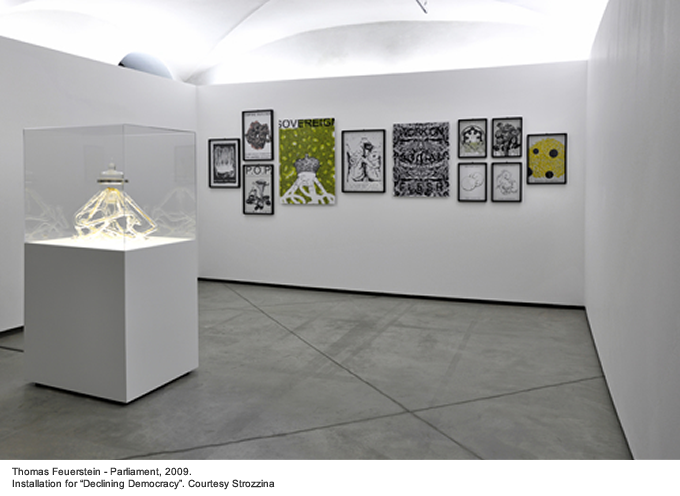 Real bio-tech art is neither illustrative nor subjugated to science. Even if the integration between biology and visual arts is often a path open to creativity and experimentation, it must not be the only criteria defining such activity, or unifying such practices under a unique definition. That’s why, in my opinion, biotechnologies must not be considered only “sources of instruments to the art use”, but also “sources of inspiration” for art.

The role of real art, as a matter of fact, is to investigate the nature of technologies and propose questions about their effects, thus establishing a continuous and useful discussion.