Manuel Vason. Performing With The Camera 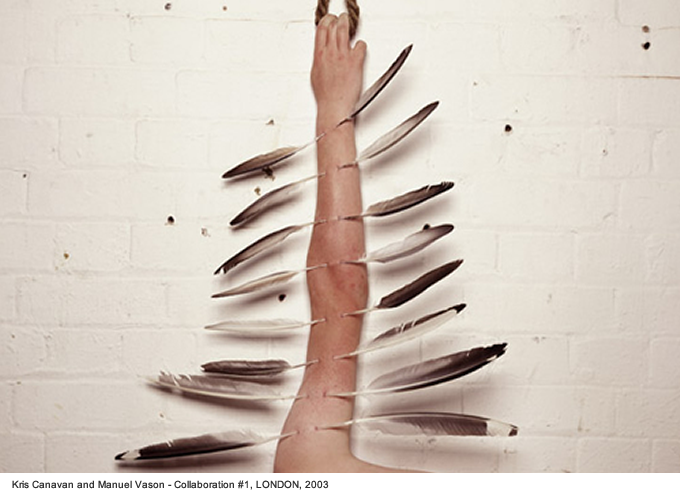 The attempt to circumscribe Manuel Vason’s eclectic – and steadily redefining its limits – work to a specific sphere seems to be close to impossible. Among the manifold and diversified projects realized by this very young photographer/performer, a clear impulse, a common and, at the same time, multifaceted and defined tendency emerges distinctly towards reformulating the self and her creative process. This directly leads to the making of his works.

The means through which this goal is achieved every time is the medium (most of the cases his digital camera), that enable the artist to dig under the surface of bodies and objects, by means of and thanks to which his work can be developed. His goals are achieved in that kind of middle earth, where the contamination of the arts takes place; where aesthetic and poetic research becomes one, by transcending the distinction of genres; where photography becomes dance, and sculpture turns into theatre. 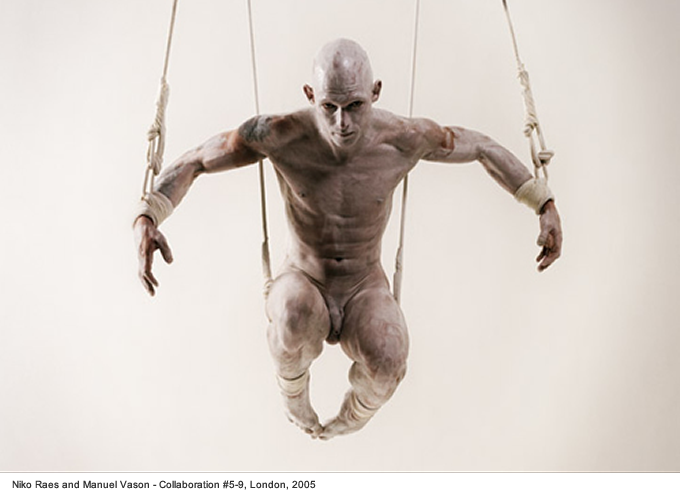 Manuel Vason was born in Padua. He started his artistic/professional career as a fashion photographer: from there, he moved to Milan and worked with big names of the fashion industry. His pictures were published in fashion magazines such as Vogue, Dazed and Confused and Flash Art (just to mention some of them); thus, his leap to the international scene (first to Paris, then to New York and finally to London – where he lives now -) was very quick, as quick as his overlap with performing arts and collaborations with their most remarkable exponents of the last years.

All these are encounters, acquaintances that the artist himself does not hesitate to define processes of infatuation; falling in love; deep crushes on artists. Vason has established (sometimes long-lasting) friendship and fellowship with many of these individuals; they are relationships through which he intended to question the role of photography.

The role of photography in fact does not consist in simply immortalizing performances, gestures or bodies , but, according to the notion underlying this artist works, digital camera becomes in turn a medium thanks to which to “perform”, through a process of creative dialogue with the object, allowing him to select the action: in this way, a pure and simple involuntary movement becomes conscious and voluntary, thus transmit ing meaning.

“That particular moment, that instant in which a fundamental meaning is contained, if held and extended, becomes Exposure and therefore, through my intermediation, it becomes Photography. I find it extremely interesting following this process within which Action turns into Gesture, which in turn becomes Exposure”. [1]His work is thus a process swinging between subject and object. During this process roles interweave with a desire for both aesthetic and poetic research; a process during which the artist rediscovers himself, but only at the end, both behind and in front of the objective lens. 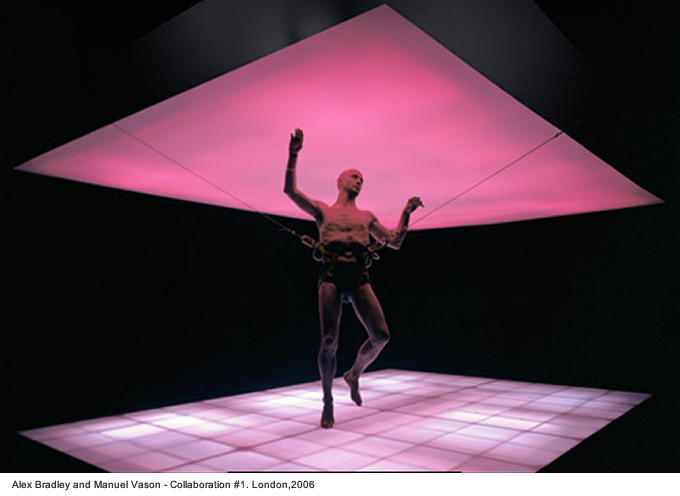 This is, without a shadow of doubt, the necessary condition of Manuel Vason’s work: being close to, profoundly integrated into, the context of performing arts. It is limited to the traditional role played by somebody commissioned by a company or the press to take pictures during a live show. His approaching the stage, or better, to the protagonists of the stage that emerges beyond itself, cannot be simply attributed to a simple passive relationship with what takes place on the latter.

Vason tryes to take part directly in this process, but, in order to successfully achieve his goal, it is necessary that the performer himself becomes a creative partner of the project, ready to turn his subject and discipline into an instrument able to interact with the digital camera. So, the goal here becomes exploring a new expressive form by combining actors’, coreographers’ and painters’ means and methods with the work to be done, in order to reach a stage where the final picture will be taken.

From his first cycle of collaboration he gave birth to “Exposure” (2001), an groundbreaking anthology where photography and live art meet halfway to give life to a workcreated in the twinkling of an eye, but which, at the same time, is eternal. To this follows “Encounters” (2007) to which over fifty international artists have participated, such as La Ribot, Ron Athey, Franko B. and Ernst Fischer.   In these shots, as Vason himself told us, there is a desire to celebrate live art: not the artist per se, but rather her effigy, that is, the representation of a particular creative process, of a defined artistic expression filtered in this case through the Italian-Londoner photographer’s view and taste of composition (often outrageous and exciting). 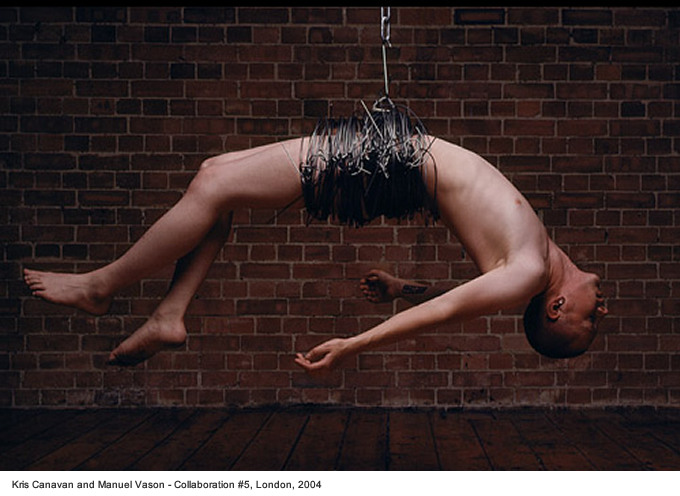 The core around which Manuel Vason’s photographic universe orbits, has always been – and will always be – the “Body” as the only performing object, both the point of departure and the point of arrival of his work, physical cornerstone on which first the performer, and then the photographer, focus his artistic research. The body of Live art is all experience, fickleness, while the work of the digital camera offers the possibility of composing pictures that will not disappear one second later: Vason’s work focuses on this paradox.

Unlike traditional still images, the results of these collaborations are, in every aspect, performances. However, they exist only when they become photographs. It is an attempt to immortalize performing bodies in a frozen pose with a will for sublimation, which meets the need to use different languages for creating new visual “articulations”.

The artists involved in such a process are aware of the fact that the contact with the audience will take place later, and only through the immortalized and static image. This encourages them to rethink the work they have to do on themselves. Thus, the reconstruction of their performing body is achieved by using moments of exchange and contamination that occur during the very performing action. Their ultimate aim: succeeding in having the same perceptual live performance impact on the eyes of the spectator.

Vason’s notion of exposure, portrayed in his pictures, reveals an essential desire for communication, as if in every picture taken, based on a synesthetic underlying principle, a message could be discerned: yelled or just whispered, this message is transmitted through exposed or “de-constructed” bodies, through sectioned, explored, disclosed and glorified bodies. They become subjects and objects of a multi-referential transmission that transcends the liveliness factor, by freezing it onto a digital camera, thus giving spectators the possibility of a continuously enjoyable vision. 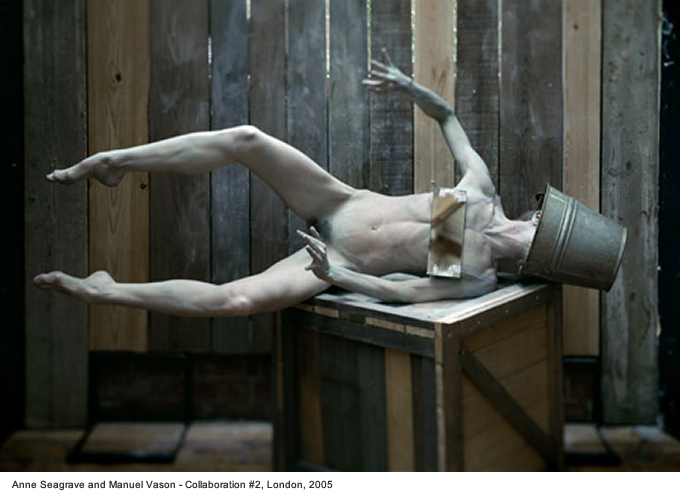 From Europe to South America

During last year Vason was involved in a project in South America, during which he realized a photographic mapping, whose fil rouge was dance, in turn detectable in the static pictures of various local performers.   In “Still Movil”, a joint initiative with Red Sudamerica de Danza, Vason intended to combine two languages, dance and photography, thus transcending their dichotomy. The static result of the gesture becomes exposure on the digital camera, along with the here-and-now fluidity of the movement, establishing a relationship through a play of conflicts and encounters, and originating sparkles of unexpected creativity, immediately gathered by the photographer’s digital camera.

This project describes a journey through artistic residences in Venezuela, Colombia and Ecuador, taken in the first semester of 2011; in Brazil, Uruguay, Argentina, Peru, Chile, Paraguay and in Bolivia, taken from August to October. It is an impressive work involving over forty artists among dancers and choreographers, coming from ten different countries, who offered their professionalism by accepting without hesitation to experiment, let themselves lose and at the same time, let themselves guide.

During this first part of the work, some of the produced materials have been recorded and then published on the web page of the project. During the second stage – scheduled to start at the beginning of 2012 – the photographic material will become a publication that will be issued later simultaneously in a generally cultural and educational contexts. At the same time, this project will be carried on through a series of exhibitions in South America and Europe. 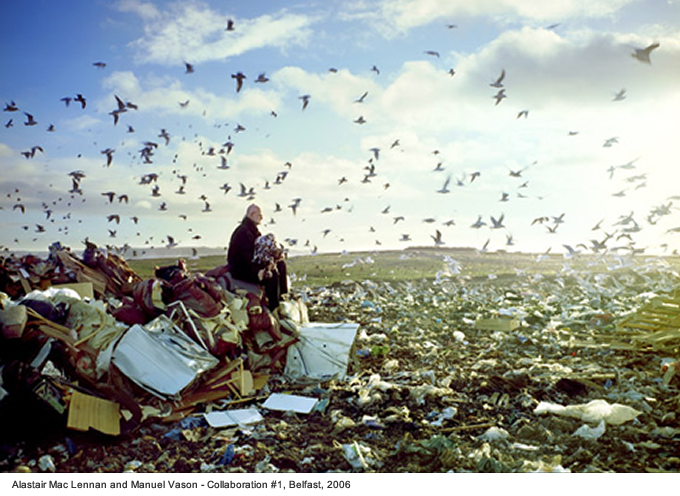 Among Manuel Vason’s forthcoming projects, he is planning to come back to Italy, to try an analogous approach with performers and companies that show a certain inclination towards the interaction of different languages and media. It would be a welcome return for an artist who is much known in foreign countries than in Italy, but we are persuaded that he would be in perfect sync with some emergent realities in the performing arts, as well as with some of the already well-established and structured ones. This is a challenge that would be nice to take up.