Explorations Of The Invisibles. Freedom & Power In The Electromagnetic 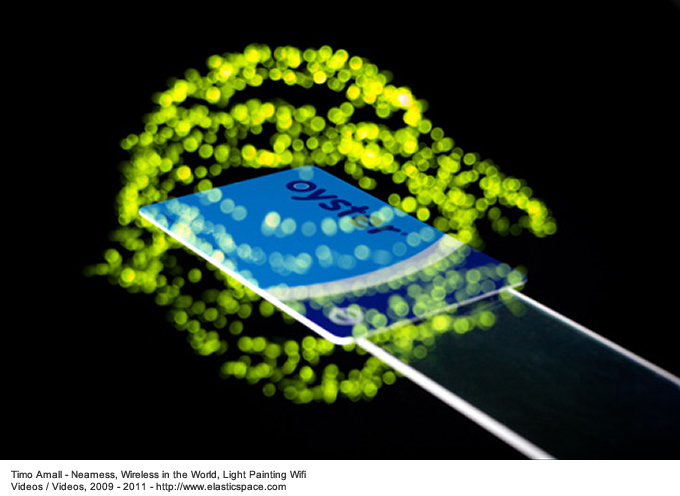 You cannot see it, but it is there. It is everywhere and it has an active role in our lives. We continuously use, manipulate and aliment it. It’s a vehicle for our communications, and to deepen our scientific knowledge. As it overcomes our perceptive limits, we don’t care about uncovering it, ignoring disputes about its proprieties, the ways it is used, and the possibilities it could offer.

It is the hertzian space, the world of radio waves and the electromagnetic spectrum. It’s an infrastructure that heavily affects our everyday life and our understanding of physical space, architecture and urbanism. It is a dimension that is better to know, in a reality with an uncertain future, where it will be probably necessary to find and invent freedom and self-management spaces.

The exploration of this landscape is indeed what the exhibition “Invisible Fields -Geographies of radio waves,” proposes. Opened on 15th October 2011 at the Arts Santa Monica in Barcelona, it will run until the 4th March 2012. Curated by José Luis de Vicente and Honor Harger, from the digital culture agency Lighthouse (Brighton, UK), it has been realised in collaboration with the British Council, the Bureau du Québec in Barcelona / Le Conseil des Arts et des Lettres du Quebec, the LABoral Centro de Arte y Creacion Industrial of Gijón and the Bòlit-Centre d’Art Contemporani of Bòlit-Girona. 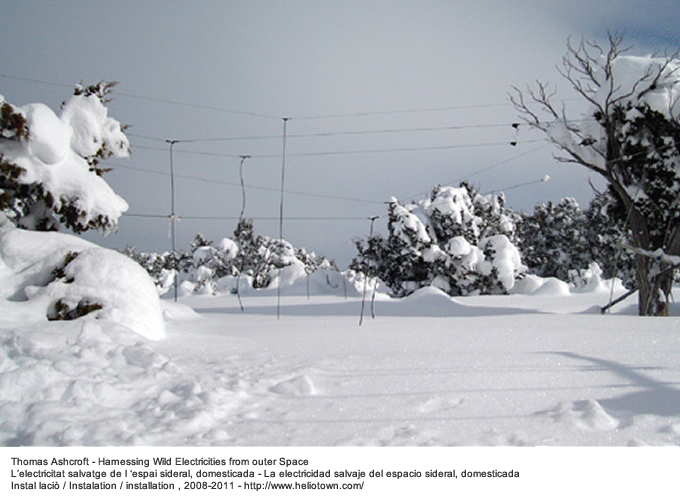 Like all the projects of the Laboratory of Space Santa Monica, this is an exhibition (directed by a young and visionary Joseph Perelló), focusing on exploring the intersections between arts and sciences, which does not just invite the viewer to passively contemplate a selection of works, but actively engages her in living projects and in workshops that get her absorbed in experimentation and deep reflections through direct participation. “Invisible Fields” want to be a sort of “observatory” that allows you to sense the radio spectrum as a physical space, “a territory”, as the curators themselves say, “that you can study, perform, monitor and explore.”

The radio-electric space, besides engaging researchers and scientists, is the subject of interest, and work, for artists, designers, activists and hackers, who work towards making these areas liveable – from the public ones (such as the WiFi technology and radio) to the most mysterious ones (such as clandestine signals and military communications)  and represent them, turn them into sound, translate them into utopian visions, occupy them. “Invisible Fields” articulates the works proposed in its exhibition in five chapters.

The first, “Surrounded by waves”, contains new aesthetic, conceptual and perceptual interpretations of terrestrial and celestial electromagnetic landscapes. Here we have two videos of Semiconductor, 20 Hz and Magnetic Movie. The first video translates the array radio CARISMA data, interpreted as audio data, into sculptural forms, while the second one shows the secret life of the magnetic fields of the NASA Space Sciences Laboratories (UC Berkeley). 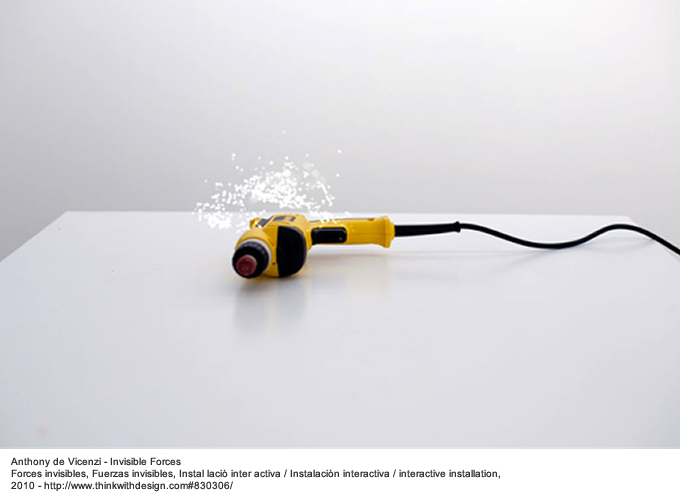 Continuing the itinerary, there is an interactive installation, Invisible Forces by Antony de Vincenzi,(http://www.thinkwithdesign.com/#830306/INVISIBLE-FORCES), an instrument that measures electromagnetic leaks emitted by every day electric appliances, and represents them in a screen that acts like an augmented mirror. We can thus enter into a Faraday Cage, to enjoy the “Hertzian silence” for a moment: the thin wire mesh that cover the walls can filter out most of the radio emissions, get us back to the time before the end of the nineteenth century, when the radio signals were only produced by natural phenomena.

After this break in an area inaccessible by the Internet and mobile tehnology, one could access the Thomas Ashcraft virtual laboratory (http://www.heliotown.com/), connected with his real laboratory in New Mexico (USA), where one could assist to the scientist activity: an experimenter who observes the celestial bodies every night, following the radio waves they emit. This section ends with Joyce Hinterding’s Loop and Fields: Induction Drawing Series 4 (http://www.sunvalleyresearch.net/), una serie di disegni che si comportano come antenne grafiche e rispondono all’energia che li circonda convertendola in segnali sonori.

The so-called Hertzian City is also the invisible architecture of the radio spectrum that has colonized the urban landscape, filling it with physical and digital infrastructures. Observatorio (http://www.lalalab.org/observatorio.htm), an interactive installation by ClaraBoj and Diego Diaz, allows us to view the wireless networks around its surrounding space.

Using a surveillance camera, a powerful one-way Wi-Fi antenna and a visualizer to distinguish the open networks from the protected one, the installation invites us to think about the need for global and public network claimed by many collectives. In addition to the electromagnetic relations, the visualization of Wi-Fi networks is also the subject of Nearness, Wireless in the World and Timo Arnall‘s Light Painting WiFi videos (http://www.elasticspace.org), the last of which has recently gone viral on the Net. 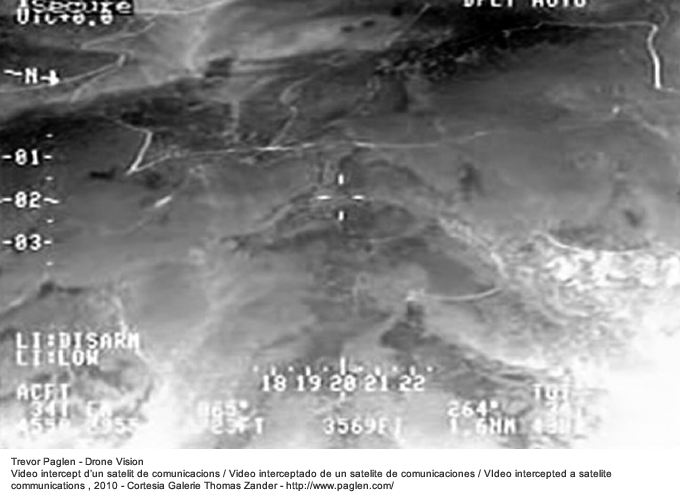 The second one, “Waves Politics”, reflects on the tensions and conflicts generated by, on the one hand, the information society transformation of the spectrum into a commodity, and the use of radio frequencies by activists, intellectuals and philosophers as an extension of public space on the other.

Here we find the interactive installation Frequency and Volume (http://www.lozano-hemmer.com/frequency_and_volume.php), by Rafael Lozano-Hemmer, which allows visitors to use their shadows to tune in and listen to various radio frequencies using the their body as an antenna. It was conceived at a time when the Mexican government was closing several informal radio stations managed by indigenous communities in the states of Chiapas and Guerrero.

Office of Spectral Ecology (http://www.mbiederman.com/#98536/Office-of-Spectral-Ecology), by Matthew Biederman, shows on a long chart how the International Telecommunication Union (ITU) has awarded the licenses for the use of the electromagnetic spectrum: a screen displays the emissions of electric, magnetic and radio frequency field of Barcelona, obtained by using Google Earth. A history of the spectrum utopias, by Irma Vilà, presents an alternative history of the spectrum that equally supports communication for commercial interests, and artistic projects that have paved the way for new visions, as well as community and participative initiatives, such as free radio like the Italian Radio Alice.

“The dark side of the spectrum” is the most fascinating and disturbing section. As the title suggests, it is dedicated to projects that shed light on mysterious and illegal uses of the spectrum by the Army and intelligence services. The “experimental geographer” Trevor Paglen (http://www.paglen.com), known for his ability to find places in both physical and herztial infrastructure could not be missed. In his video Drone Vision, he shows the transmission of a drone (remotely piloted aircraft) intercepted by an American “satellites hacker” 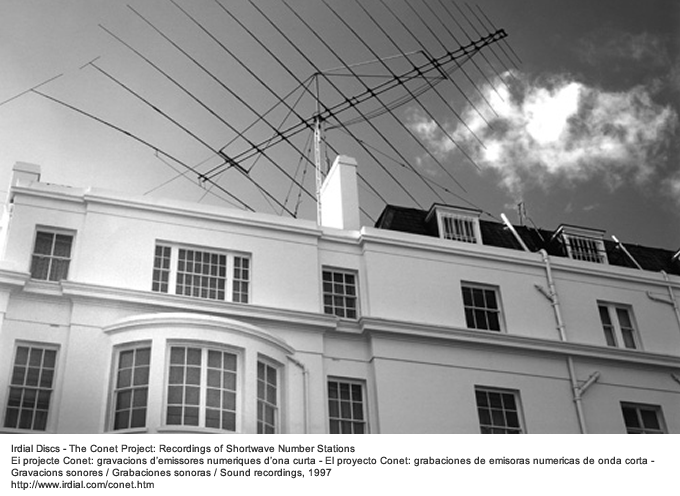 The Conet Project (http://www.irdial.com/conet.htm), by Irdial Discs, is a collection of recordings of number stations, shortwave radio stations of unknown origin that broadcast sequences of numbers, words or letters, Morse code or apparent noise. Initially these recordings were associated with the Cold War, but the continuation of their activities, plus the fact that no institution or government has ever admitted to using them, left them immersed in mystery.

Skrunda Signal, a video by Raitis Smits, Rasa Smite, Martins Ratniks e Linda Vebere / RIXC (http://www.rixc.lv/projects/skrunda_signal/), is based on a research built around a radio-localization station of Skunda, in Latvia, with interviews with experts and stories of local residents, who were victims of health problems, hallucinations and experienced unexplained episodes.

Finally, the Twilight Immunity Museum byJob Ramos (http://www.jobramos.net/) reports the effects, more or less metaphysical, through a series of symbolic objects, caused in the environment by Radio Liberty, a radio station property of the U.S. government installed about 150 km off Barcelona which apparently was in charge of broadcasting propagandist information directed to the Soviet block. The radio stopped its activities in 2001, and was destroyed in 2006, rather than be transformed into a museum, as it was originally proposed.

Throughout the duration of the exhibition, in the “Create waves” section, workshops were held to enable the participants to better examine the themes covered in the exhibition and to get a chance to build radio, city networks and antennas able to intercepting signals of all kinds, including those emitted by the satellites orbiting the earth, by using simple and every-day material. 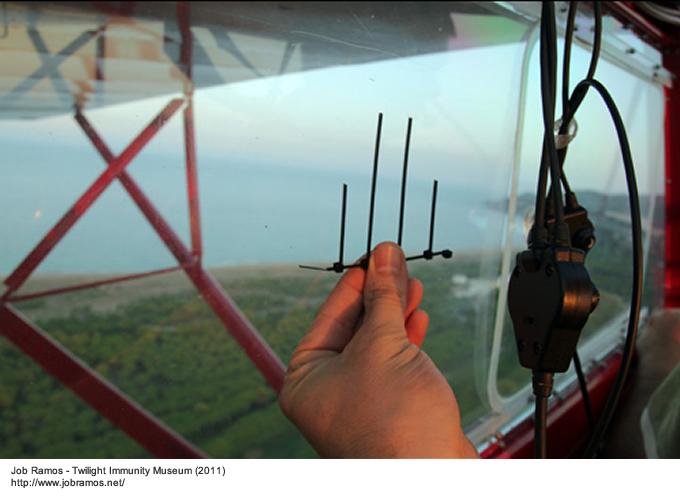 Among the protagonists of these laboratories, the most remarkable were Guifi.net, a collaborative platform for innovation, research and development that promotes networking and open communication infrastructure and one of the largest wireless infrastructure in the world: the Luthiers Drapaires (http://luthiersdrapaires.wordpress.com/), an interesting group of creative recycling of technological waste to build highly original musical instruments following DIY principles; Plataforma Cero, a project of production and research of the Centro de Arte y LABoral Creacion of Gijon(http://www.laboralcentrodearte.org/en/exposiciones/orbitando-satelites); the Center of Astrobiology (CSIC-INTA) (http://cab.inta-csic.es/index.php?lng=en), one of the three monitoring stations of NASA satellites in the world, which has a radio telescope with a diameter of 34 meters near Madrid.