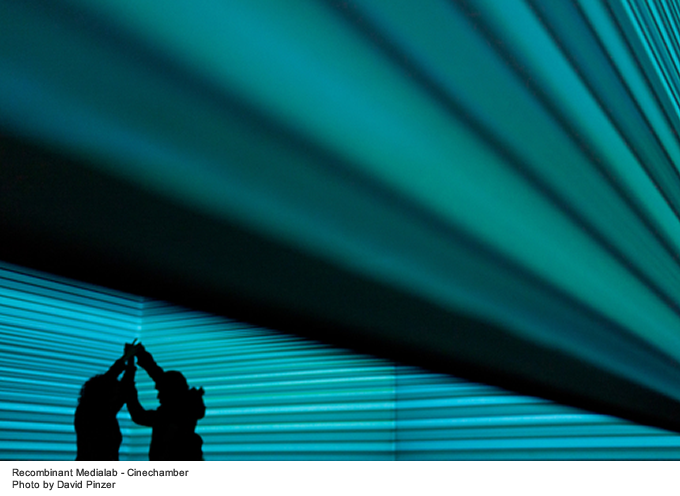 Last year from November 16th to November 26th took place the fifteenth edition of Festival CynetArt of Dresden, one of the most long-running and most famous European festivals, known in the field of digital art and its contamination with contemporary audiovisual methods.

In a historical period so deeply characterized by drastic and increasingly radical economic cuts to the arts and culture that is also affecting the countries in Northern Europe (Germany and the Netherlands especially), the CynetArt Festival is one of the promoters of European Cities of Advanced Sound (ECAS).

This is a network of European festivals (Cimatics Brussels | The Hague Todaysart | CTM (Club Transmediale) Berlin | Musikprotokoll Graz | Unsound Krakow | Insomina Tromsø | FutureEverything Manchester | Skanu Mezs Line | Dis-patch Belgrade| Festival Pomladi / MOTA Ljubljana | Full Pull Mälmo | Les Siestes Electroniques Toulouse | NuMusic / NuArt Stavanger | Miriam Marseille | Sperm Prague Bucharest), whose first goal is to concretely demonstrate how the dynamics of networking, the sharing of contacts, the knowledge and production (as well as the costs of logistics and transport of works and artists) could work as a possible and effective way to create cooperation between the actors in the worlds of culture and the arts.

This is definitely a shared approach to production (far from the now constant complaints about the economic situation of “crisis” and “closure”, so typical of the academic world—not to mention the anachronistic attitudes by certain artistic circles to not accept the logic of the market), leading towards a greater inter-community cooperation and constant dialogue with the logics of economy that underlie contemporary cultural production. Incidentally, this attitude is perceived very positively at the European funding level, facilitating, for example, the access to the Program of Culture of the European Commission, from which the circuit ECAS has been benefiting in the years between 2007-2013. 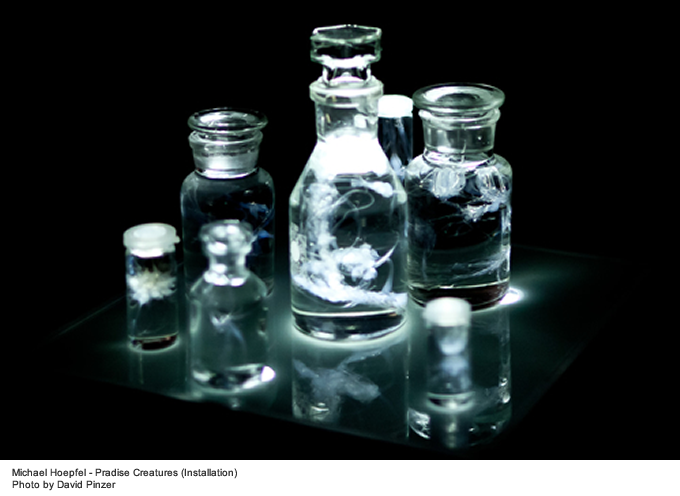 Born 15 years ago inside the Trans-Media-Akademie Hellerau, under the artistic direction of Thomas Dumke with the important support, among all, by Joanna Szlauderbach, CynetArt Festival has enjoyed the use of the halls in the beautiful Festspielhaus Hellerau, the Northern urban area of Dresden, for over 10 days.

This has been a unique opportunity to celebrate the centenary of the realization of this structure for the Arts designed by the architect and town planner Heinrich Tessenow, part of the residential complex in Hellerau and also the first tangible result of the influence of the English movement “garden cities” in Germany, together with the symbol of the movement known as “Body Liberation Movement”.

Following this approach as closely as possible and adapting quite well to the architectural spaces available, CyneArt Festival was really able to offer its visitors a rich, never predictable, perceptual experience. The works on display were harmoniously organized, proposing to the visitor constant dimensions of “discovery”, while she was moving throughout the various exhibition rooms curated by Thomas Dumke. I had a chance to visit these very involving environments suspended between dreams and games, which pushed the curious visitors to delve into the belly of the Festspielhaus on Saturday, when the artists were in attendance.

The Festspielhaus is a very dark but immersive space, quite wide in its volume yet able to create the right balance between anxiety and fascination, all revolving around the central pivot of the whole exhibition: the Cine Chamber of Recombinant Media Lab, produced and edited by Naut Hauman. 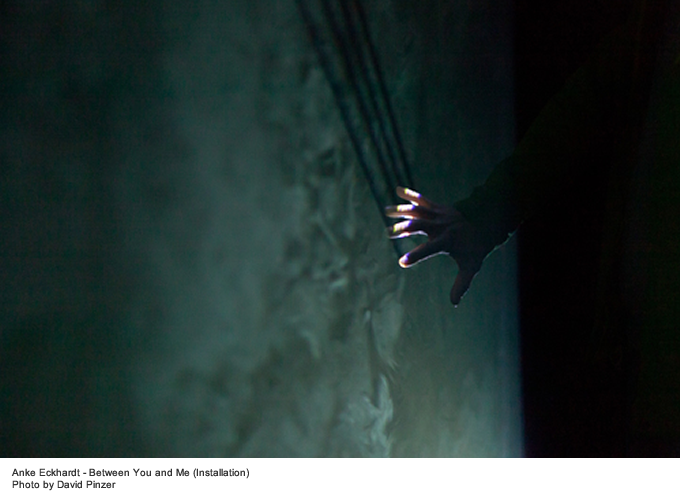 If the dissemination of the works has probably penalized the perception of the exhibition as a unique exhibition, the layout of the spaces dedicated to each artist, designed by Endre Ketzel, was able to perfectly enhance and place very different works. Among them: Experiment Using Movement And Light To Define Space, Light Installation by Markus Mai & Moritz Arnold, who have been working on only two elements, light and movement, were able to draw structures of shadows in continuous becoming, destabilizing the architectural lines and relationship between body and space.

Finally, the project Between | You | And | Me, by Anke Eckardt, undoubtedly the most particular woork in the whole exhibition: a large dark room divided by a wall of light and smoke which invites the viewer to come closer, to discover that this wall is not limit or barrier but a redefinition of a space to cross, inside which discover sounds and interact with the body of the other. 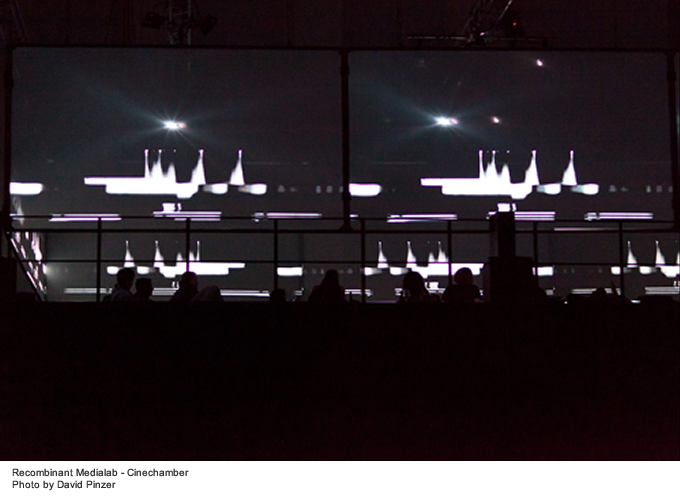 Leaning in an almost sacral position on top of a structure to which only a limited number of viewers at a time had access (that is, to the various programs prepared over the weekend), the CineChamber did not disappoint my very personal expectations about this immersive audiovisual environment, about which I had learnt only from “books” when it was built in San Diego (for more information read the interview written by Domenico Sciajno on the number dated the December 2006/January 2007 of Digimag20 http://www.digicult.it/digimag/article.asp?id=665 ) and which I also had the misfortune of missing at last year’s Club Transmediale.

CineChamber is an audiovisual system for screening and performance that definitely holds true to its name: a room built as an elastic and immersive space, with its 8 meters x 12 meters made of 10 screens positioned at 360° (two long walls with three screens, two short walls with two), enriched by 8 sound channel emissions at the top of the room to form a so-called 8.8.2. multi-channel sound system. In this space, the public is invited to come in and sit down, giving the wonderful possibility to enjoy the programs and concerts especially produced for the system. 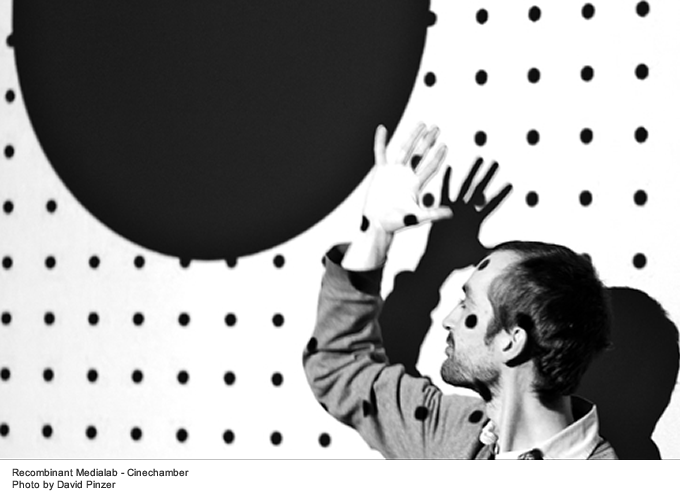 It is hard to describe the emotional and perceptional impact of this audio-visual system in full operation, which surely requires a direct experience in order to be fully understood and appreciated. While Ryoichi Kurokawa‘s aesthetic power (its trademark since several years), its pictorial images as well as its glitch sounds blend well with the structure of immersive Recombinant Media Lab, the adaptation of Inject by Herman Kolgen does not seem to fit particularly well with the multidimensional space, since it requires a deep work of spatialization of the audio-visual stream ( the re-editing of a work that already exists or a site-specific creation), which in this case has not been done, the repetition of the signal into multiple channels (screen and speaker) being preferred over spatialization.

The site-specific work of Edwin van der Heide, who works to bring a simple and effective display of soundwaves created in his works (which in this case uses very well the circularity of the system and combines it with his ability to work with gradients of color to be moved and swayed slowly in space), is beautiful to admire. The adaptation of the multi-channel and multi-screen of the Brilliant Noise by Semiconductior, is harmoniously enriched with new materials.

There is always a risk of using CineChamber as a nice big toy, as evidenced in several screening programs that do not seem to go beyond the simple philosophy of graphic animation. But when this devalued element becomes a potential immersive dancefloor, as in the case of adaptation of the live set of Signal (Cartsen Nicolai, Frank Bretschneider, Olaf Bender), then we fully understand its real dynamic versatility (as immersive and experiential cinema, a system for audio-visual processing for clubs) and its ability to offer different experiences and to satisfy different audiences.

In an adjacent part of the central hall, Saturday night also witnessed the Automatique Clubbing, an interactive dancefloor project developed on the basis of a software tool (created in vvvv), used to create responsive environments reacting to the presence of human bodies, called CHET- Collective Hedonistic Environments Toolkit – developed by Intolight, a creative agency that won the contest of ECAS Network in 2011 (which with its 24,000 euros is one of the richest competitions at the time in the European space but also world). 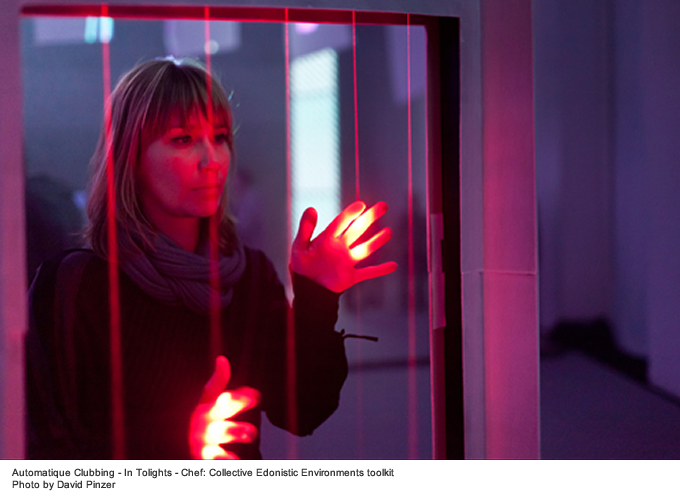