Anything I Love Goes Into My Brain. An Interview With Rafael Rozendaal 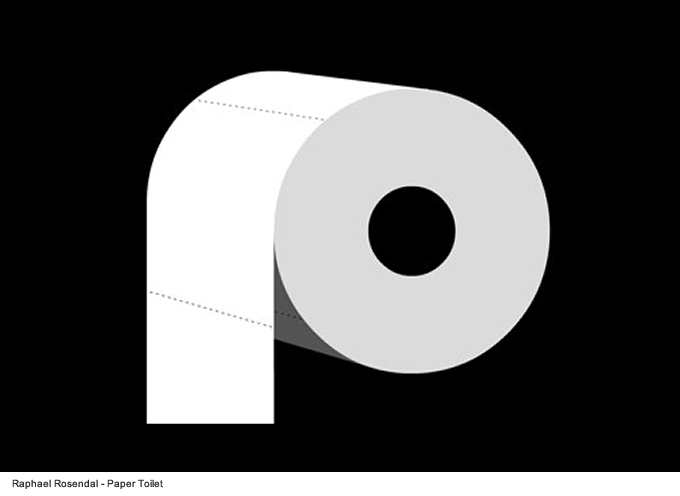 In the year 2000, Miltos Manetas published the famous Neen Manifesto in which he describes a new unidentified generation of artists who glorifies computers, artificially simulation and who use the web as their gallery. Two years later, Manetas and Peter Lunenfeld manifested the Neen concept in a spectacular “hijacking” of the Whitney biennals domain name.

During a talk a month before the opening of the Withney biennal the two friends discovered that the domain name Whitneybiennial.com was open for registration and they decided to challenge the museum show. After a well prepared media coup, they launched the new homepage with their own exhibition. Around 20 artists were represented in the online biennal. Artists such as Miltos Manetas, Rafaël Rozendaal and Han Hooeerbrugge ,and other Neenstars presented artworks made with Flash. 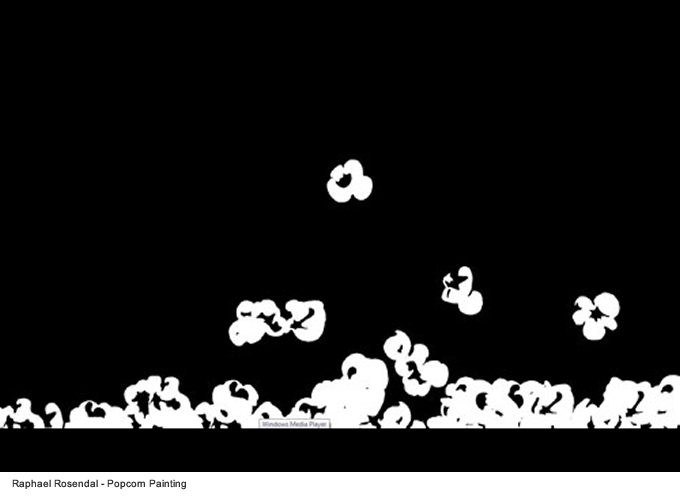 On the new homepage you could also find some theoretical texts. Here, I will highlight three important quotes to describe what Neen was all about:

“This generation does not care if their work is called art or design. This generation is no longer interested in the “media critique” which preoccupied media artists of the last two decades; instead it is engaged in software critique.“  from “Generation Flash” by Lev Manovic.

“Websites are today’s most radical and important art objects.” from “Websites, the art of our times” by Miltos Manetas

“Flash is PopTech, the OpArt of the new millennium. Flash is PoliTech, the irrepressible joy and lightness of being digital after the boom economy has gone bust.” from “Flash is Poptech” by Peter Lunenfeld. 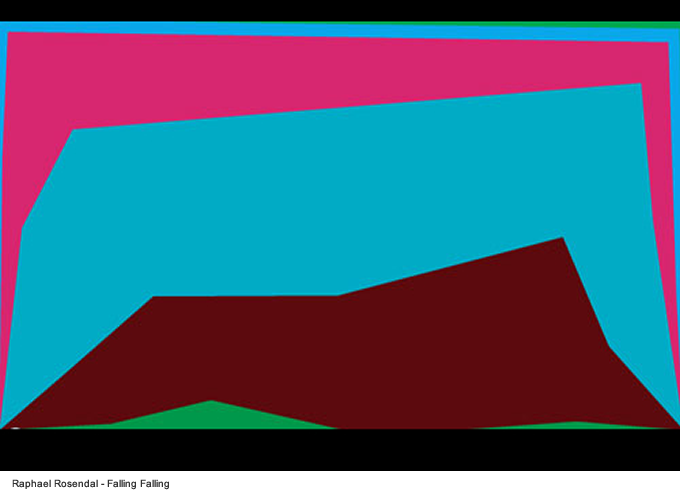 With Neen and the Whitneybiennal.com, Flash was established as a artistic tool for a new generation of artists. One of the artist was Raphael Rosendahl with his work Clouds, a Flash work with a blue background, where big white clouds scrolled across the screen from left to right, and when you put you mouse over the clouds would burst with a “poff”.

Today Rosendahl is a well established artist in the net art scene. Recently Raphael participated in a commercial for the the new Nokia N9. When I saw the Nokia video commercial I couldn’t  help to draw a parallel with a commercial with another famous artist, when the home computer Amiga 500 was launched at a press conference in 1985. The Amiga market team had engaged Andy Warhol to paint Debbie Harry live on an Amiga to promote the new fantastic product. Perhaps, it’s bold to compare Raphael with Andy Warhol but as you will see there are some interesting connections between Neen and Pop art.

Raphael fits well into the Neen concept. He mainly uses Flash in his work, he publishes all his work on the net and his art consists of web pages with unique domain names. But when I ask Raphael if he calls himself a Neenstar and if he belongs to the generation Flash he replies that he rather wants to be connected with the Internet generation than to a particular manifesto or movement: “Flash is a tool, but I care mostly about the Internet. I belong to generation Internet and Do It Yourself publishing. I am not waiting to be asked to take the initiative to explore the new landscape we all love, that is Internet”. 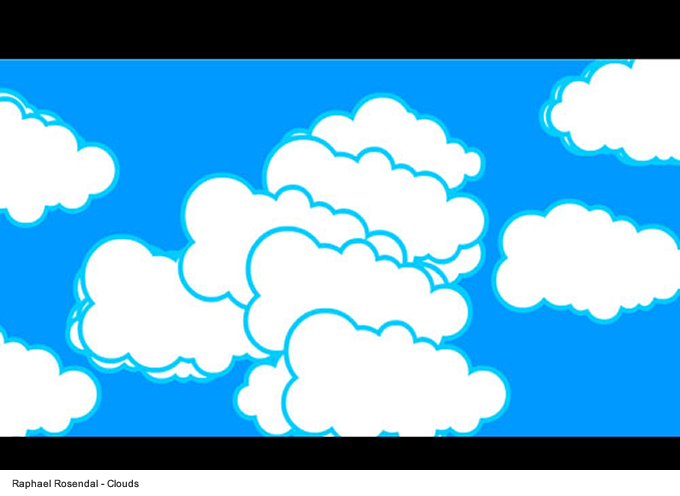 Flash has always been an important tool for Raphael, as he confirms: “I used Flash because it always works. In my experience all the other options (Javascript, frames, processing, CSS animation, DHTML, Shockwave, Silverlight, Canvas tag, WebGL, Unity) are either very different per browser or crash often. I always liked Flash because it is very  reliable, and the files are tiny”.

What will happen in the future with Flash? The last years developers have abandoned Flash in favor of the new HTML 5 standard, which has good support for video. Companies such as Apple don’t support Flash in products such as iPad for example. Rafaël Rozendaal‘s opinion is quite clear: “We will see what happens. All the HTML5 demos I’ve checked behaved quite differently in different browsers and now Chrome is more optimized for SVG and Firefox for Canvas tag and lots of people don’t update their browsers. I’ve made some iPhone apps and they have sold really well so that’s great. It’s nice to think about these mobile touch devices, and how people have them in their hands at all times. Whatever happens I’ll go with the flow of technology, but I’m not a super early adapter. I wait till the mainstream is ready, because I like to speak to a large audience..”

Raphael has since the Whitneybiennal.com continued to develop his own artistic style. His works consist of  large colorful fields and objects, sometimes with psychedelic effects. I think of Pop-art and Andy Warhol’s famous screen prints of Marilyn Monroe when I see some of his works. 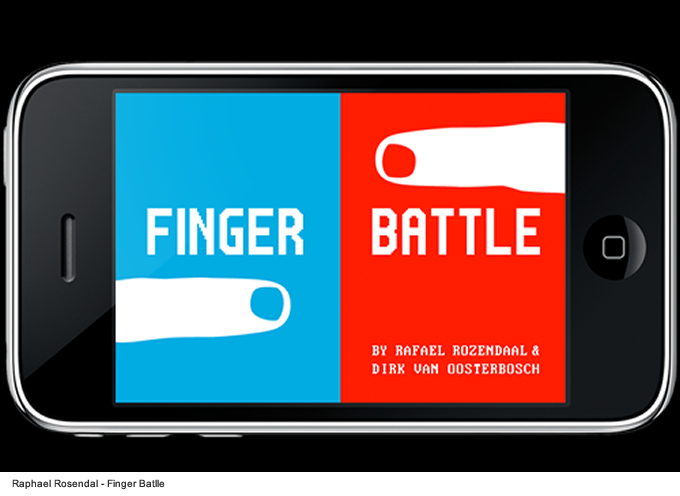 When I ask Raphael about his artistic inspiration, he answers as many other artist in his generation that there are many different sources. The net is a big cut and paste inspiration area where you can mix everything with anything: “I love paintings, old cartoons, new cartoons, anything I love goes into my brain and becomes part of me. I like looking at things for a long time, staring, being bored, it’s important.

Rafaël RozendaalRaphael is a pure net artist, nearly every work of him is digital and available on the net. So it was a bit surprising to find out that almost every art project of Raphael begins with a handmade sketch before it goes digital. As he tells me : “I do the first drawings by hand because it’s faster. I can make many and not worry and later I select which things to continue. “. 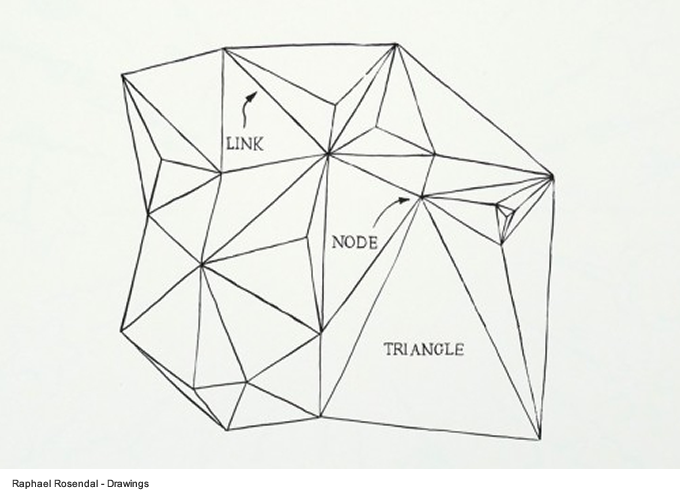 Many of Raphaels works are about repetition and motion. It can be walls that fall in a never ending loop, toilet paper that you can pull out for ever, doors that open new doors that open new doors and so on. In a way his works can be experienced as a metaphor of a never ending Sisyphus work. A rather hopeless situation when you never get out of the loop, but on the other hand, you could also experience his works as a kind of meditative mantra that repeats itself and forces you to slow down and reflect.

Raphael describes this feeling: “I think it is a choice, I like making these moving images that do not have a beginning or end, but they still move, infinitely. Isn’t it amazing that computers can create infinite generative images? I’m not sure why I do it or what it stands for, but it’s something I have to do.”

“Websites are today’s most radical and important art objects” wrote Miltos Manetas. This is a statement that fit well with Raphael’s work. When you buy a work of Raphael you not only buy a digital copy but also an art object since every art work has a unique and exclusive domain name which the buyer purchases. To make it easier to sell his artworks Raphael has created a legal Art Website Sales Contract: “I made the contract because I needed it, because selling websites is a new thing so there were no examples yet. And since I made it I thought why not share it, so it can stimulate other artists to sell websites. I like the idea of art being open to the public yet exclusively owned. A piece of art that is everywhere in the world at the same time, isn’t that amazing?” 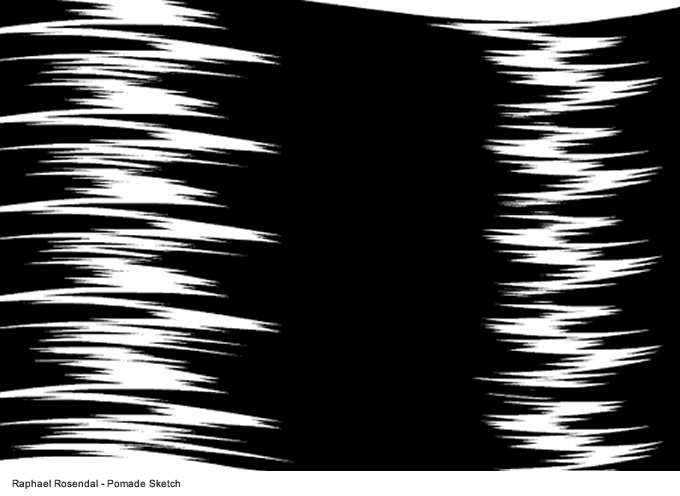 Today when more and more art are digital it also open up new ways to exhibit it. The MINI Museum of XXI Century Arts by Domenico Quaranta is a 7” digital photo frame bought on eBay equipped with a 4GB pen drive. The MINI Museum then travels from node to node around a network of artists.

Artist Aram Bartholl’s Speed Show Manifest consist of some simple instructions: “Hit an Internet-cafe, rent all computers they have and run a show on them for one night. All art works of the participating artists need to be on-line (not necessarily public) and are shown in a typical browser with standard plug-ins.”

Raphael has also contributed to this new exhibition form with BYOB (Bring Your Own Beamer). BYOB is described as a series of one-night-exhibitions hosting artists and their projectors. This year BYOB was selected by the Padiglione Internet Pavillion at the Venice Biennal 2011. 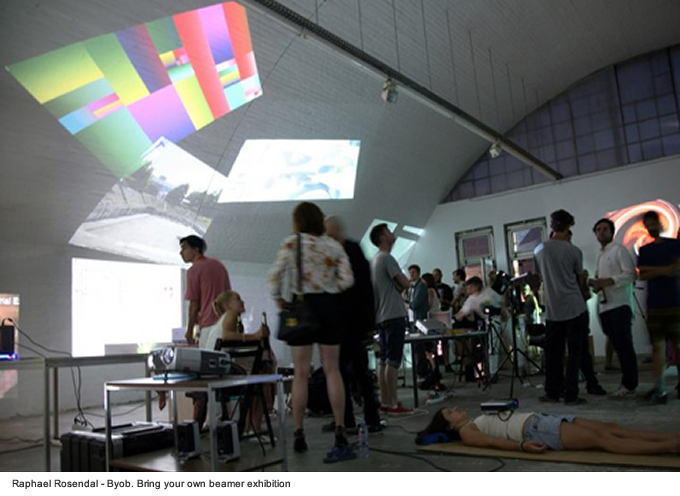 Raphael ends by explaining why BYOB is such a nice concept, since it allows net artists to meet in real life:”I am so happy with BYOB! BYOB is simple: find a place, invite many artists, ask them to bring their projector. It’s open source, anyone can make a BYOB, and so it spreads fast. Within a year there were 48 editions all around the world. I think people make a lot of things online and this is an effective way of coming together and sharing that in a physical social environment, it makes people very happy”.