A New Documentation. An Interview To Joao Vasco Paiva 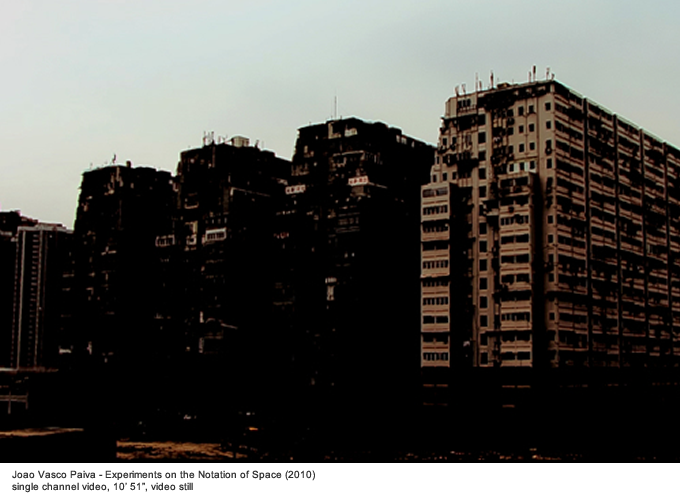 João Vasco Paiva (n. 1979) is a Portuguese artist based in Hong Kong since 2006. He has taught at the City University of Hong Kong School of Creative Media and Hong Kong Art School/ RMIT University. With a background in painting and advanced training in media technology, his work is characterized by the appropriation of observed phenomena, mapping apparently random situations and presenting them in an aesthetically organized framework through video, audiovisual performance, recording, and installation.

One of his best known projects in this rubric is Experiments on the Notation of Shapes (2010): taking the city as a sculptural playground, two projections present images of the Hong Kong skyline at a distance: largely still, contemplative, and gray, they offer a dispassionate glimpse of urban planning and architectonic monumentality. Facing the ceiling in a box on the floor, a monitor depicts a different vision, frenetically winding through back alleys and service roads amidst the architecture of spectacle, and generating an audio signal that is, in turn, modulated in frequency by the projected images. The resulting cocoon of sound and image runs the gamut of the urban experience, from the quietest moments of stillness to the madness of the intersection.

More recently, the project Forced Empathy (2011) consists of a single-channel video, a kinetic sculpture, and a series of prints. A number of floating objects in the harbor of Hong Kong subject to wind, waves, and other factors causing them to bob and sway, sometimes gently but other times rather wildly, are recorded by a stationary camera.

When edited, the filmic object is computationally “forced” to remain stable and equidistant from all edges of the frame, such that the background environment inversely adopts the motion of the floating platform and takes on the role of visual noise. A wooden sculpture of the floating object is kinetically animated to inversely follow the motion of the video, causing a moment of confused parallelism in flat image and habitable space. Behind this kinetic moment of mimicry sits a simple graphic print, an abstraction of the harbor background. 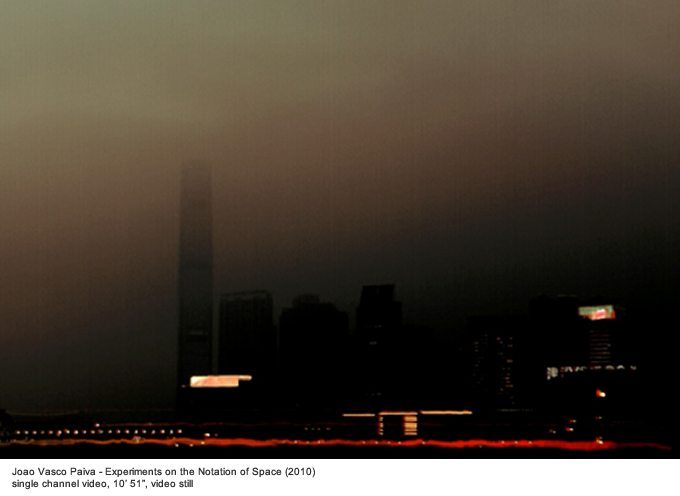 His aesthetics often emerges at the point where generative processes come into contact with urban topographies, exploring control through randomness and quotation. The work discussed here is concerned with new modalities of documentation that rewrite originary aesthetics—creating new worlds as it restructures our shared sphere of perception.

As Paiva prepares his latest solo exhibition, Palimpsest, which consists of an electronic installation, generative video, prints, and paintings based on the non-space of the mass transit station, he responds to a few questions about the role of new media in his practice and the status of the outsider in cosmopolitan Hong Kong. The exhibition opens at Saamlung in Hong Kong on 18 November.

Robin Peckham: Let’s start with the obvious question that everyone has been asking about this exhibition project. You were originally trained as a painter, but you’re best known for your work with generative aesthetics and digital media. Why return to painting in this case? And what’s the relationship between these different categories of techniques in your practice?

João Vasco Paiva: The initial concept of this project was to encrypt a variety of visual and audible information that is characteristic of Hong Kong subway stations. Through a compromised translation, my intention was to reduce this content to its basic features while keeping the formal aspects of the objects that bares it. In this case, the paintings deal with content that already existed in a two-dimensional form. The need of doing this right now comes from a growing interest in the structural and formal aspects of information that already exists in bi-dimensional support.

To highlight these aspects, I encrypt them in traditional materials and supports. To elevate these simple forms to another status by painting them-isolating and framing them in order to display them in a gallery-represents an act of appropriation that extends the readymade, a return not to painting as a performative action but as an object. My practice is not reducible to any single medium. Each medium and process I work with is chosen according to the necessity of each specific project.

The way I approach different mediums, whether they are digital or analog, respects the premise that each different scene requires a certain medium to document it. By selecting what kind of information I want to gather and transpose, I select the most appropriate technique to do so. When this decision is made, I try to deconstruct the mediated process that encompasses that technique. 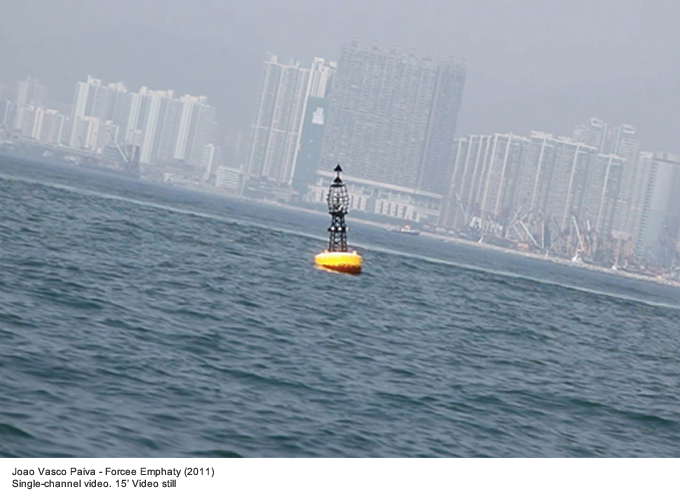 Robin Peckham: The central physical object in your recent work has been a series of turnstiles derived from those in the Hong Kong subway and light rail system (known as the MTR). Why are you interested in this kind of aesthetics, and how do you define this sort of non-place (the subway station) with a heavy sense of place embedded in it (the locality of Hong Kong)?

João Vasco Paiva: Besides being gates, the turnstiles encrypt the flow of people entering and leaving the subway stations. I am interested in using this kind of rhythm, random and spontaneous, as a composition tool. As in my previous exhibition, “Forced Empathy,” I want to isolate a certain rhythm and use it to activate the same kind of object (somehow turning away from data visualization) and fabricate a situation in which the information can be observed not in a pure state but in the animation of the object that encrypts it.

Where, in that past project, video was the method to encrypt the movement of an object-and therefore this movement was applied to the behavior of the video itself-here I wanted to grab the data of people crossing the turnstiles, but instead of transforming it into something else I wanted to use the same object to display this data. The object keeps the same formal aspects of the original one, including the produced sound and movement, but it is electronically automated. On the other hand, the turnstiles are a strong reference to the idea of access, and my interest in non-places, comes along with the kind of access to information that one can have in such spaces. I am particularly interested in digging out hidden scores from certain situations, and to create enclosed systems fed by information retrieved in advance.

In Hong Kong, my personal experience as a foreigner, deprived of access to information and keeping a certain distance from the linguistic attributes of the surrounding culture, made me focus on this kind of experience. While certain information is not accessible to me, I am compelled to focus on another kind of information, more raw and “primordial,” in some way. Non-places like subway stations are discharged of these layers of superficial cultural material, but they still maintain attributes-more primary ones-that are essential characteristics of the same culture. 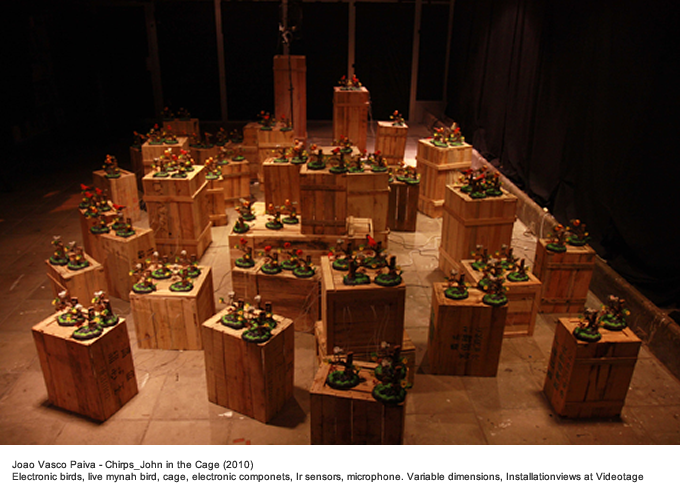 Robin Peckham: In what ways does this turnstile object-a kinetic sculpture of sorts-reflect your ongoing interest in electronic media? Does it somehow link the new media circle within which your work is largely known and a broader sense of exhibition production? I know you have consistently rejected the label of “media artist.”

João Vasco Paiva: Well, it would be more adequate to say I reject the label of “new media artist,” because my work is not restricted to the computation and information that is passed through bits. I do not see a great difference between these circles. Technology has always been present in art making, and personally I would divide artists not in terms of the technology used but rather the use they give to it. The role that technology has in artistic practice differs from painter to painter as well as from new media artist to new media artist. Personally, in my practice, I assume the role of technology in the documentation process-this process extends through every medium.

The turnstile is a sensor. In it, the act of sensing the physical world is obvious and amplified, going completely against the new technological developments that pursue invisibility and space ecology. That was what first attracted me to it-we could call it a monument to the acts of mapping and encrypting, not only to control, but to the idea of gaining a very basic knowledge: how many and with what frequency individuals have passed through it. And again, there is also the idea of access, the access that I have to information, the access that new media experts will have to the paintings, and so on. 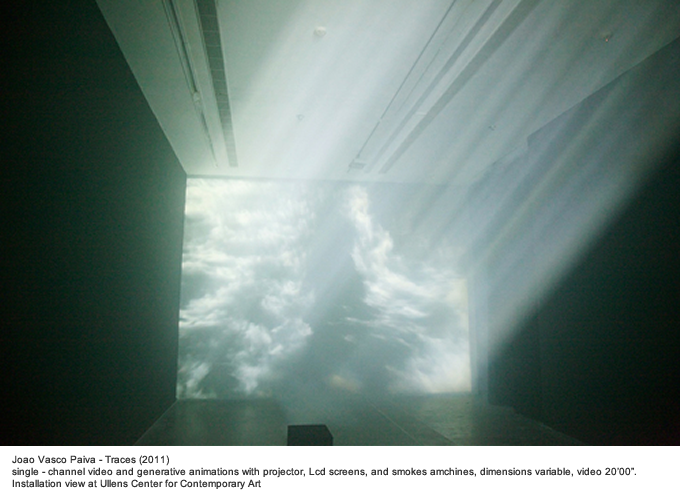 Robin Peckham: The paintings in this exhibition are based on visual materials from those same MTR stations and platforms like advertisements, station maps, and wayfinding aids, but you have abstracted all of the textual (and some of the graphic) information. What is the impetus in this kind of treatment?

João Vasco Paiva:As I mentioned before, I wanted to remove any kind of additional information from the objects. The paintings keep the same formal attributes of the design that was made to contain information, so, when this information is removed, the design becomes the information itself-the basic attributes of a painting, color, composition, and structure. The impetus is to reduce the transmission of information to its basic features-forms, shapes, and colors-that can be recognizable despite cultural and social backgrounds and apart from any culturally constructed knowledge and language.

At the same time I intend to highlight the aesthetic components that feature in a so-called “non-space.” While a non-place is defined as a place with no cultural content, my project contradicts this by concluding that a “non-place” represents a cultural and social space that still characterizes the population. In a global context, these non-places are circulation places for the masses, and we spend a quantifiable part of our life in them. They are a symbol of our time, and end up by influencing us as well.

Maya Deren claimed, while she was documenting rituals in Haiti, that a culture is characterized by the movement of its individuals-I agree with that, and believe that it can also be characterized by any kind of visual or audio stimulus that translates its very core. These characteristics are more significant than the factors that are traditionally the object of study, because they can be perceived by anyone. 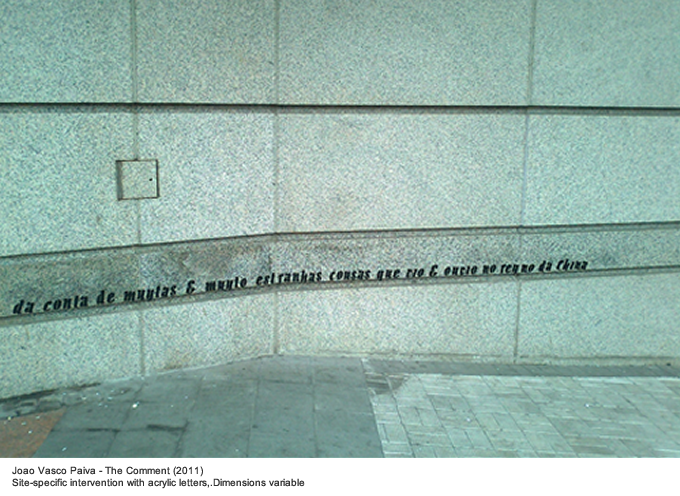 Robin Peckham: In a sense this marks a rejection of the linguistic turn, which gained currency in the art world in the form of discursive production some two decades after its rise in Continental philosophy. Does your embrace of the painting as an object instead say something about a new, parallel turn today? And, as you are a non-Cantonese speaker from Portugal based in the former British colony of Hong Kong, does this new turn have something to do with the a priori status of the global art world today?

João Vasco Paiva:Yes, in a way. The fact that I do not understand Cantonese, neither spoken nor written, makes me experience Hong Kong with a certain level of abstraction. Even so, I feel familiar with the place, and while this has been a barrier for interaction, it is at the same time a liberating factor. Certain aspects, non-textual but purely visual and sonic, allow me to live here in privacy while still maintaining an intimate relation to my surroundings.

I could say that these aspects are characteristic of the place and in that sense I wouldn’t say that my work presents a rejection of the linguistic turn, but perhaps rather research on the very core of language itself-visual and sonic language. Hong Kong allows me to retain a desired distance from my subject matter, an outsider position that enables abstraction and, therefore, a focus on visual and sonic structure.