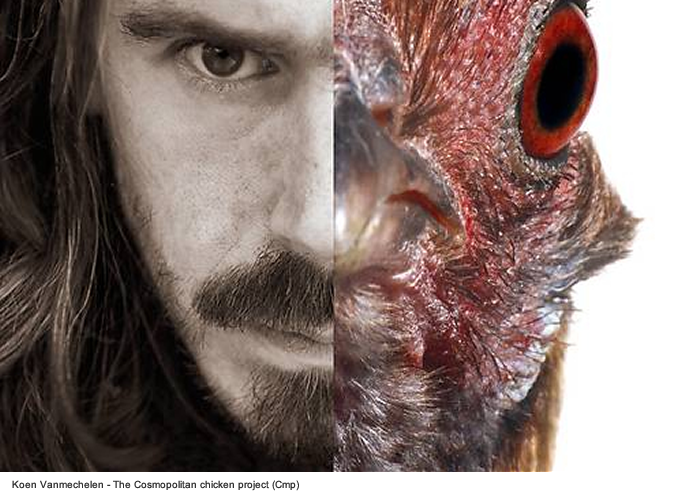 During the international arts exhibition LIV, International Art Exhibition in Venice, the Belgian artist Koen Vanmechelen installed a “laboratory” at the Istituto Veneto di Scienze Lettere ed Arti, Palazzo Loredan, one of Venice most renowned buildings. It is a new stage of the artist’s research on fertilization of arts and science, a project that Vanmechelen has been pursuing since the beginning of his career using all sorts of materials and techniques â” sculpture, video, photography, multimodal installations, drawing.

The Cosmopolitan Chicken Project (CCP) is an experiment begun in 1989, the year the Berlin Wall fell, with the purpose to create generations of hybrid chickens through the crossbreeding of regional specimens with international ones. 14 hybrid generations have been created so far. The key point of the project pivots around the question on a (supposed) cultural and biological diversity. Everything starts from the chicken, whose different regional breeds are present in almost each of the 7,000 existing cultures.

The chicken created after six months of crossbreeding will be a Mechelse Fayoumi specimen. By the way, not all the existing species of chicken have been involved in the project â” for example, African species have not been considered, apart from those coming from Egypt, due to legal impediments forbidding chicken exportations. As a result of it, the chicken created by Vanmechelen, named Superbastard, will not be as cosmopolitan as it was conceived. 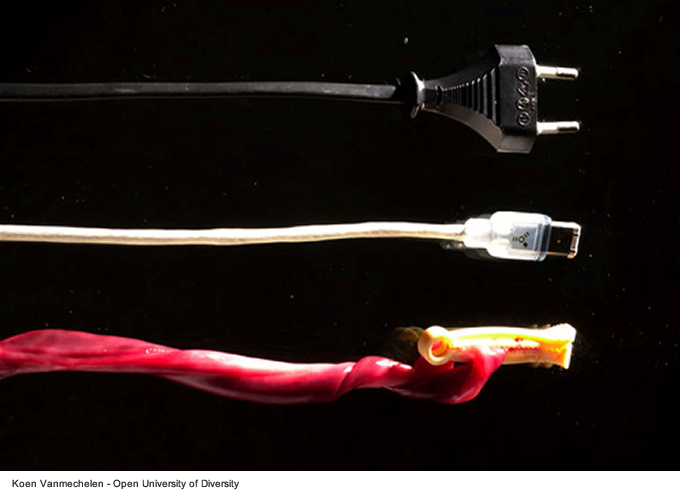 Koen Vanmechelen‘s interventions in the fields of science, ethics, philosophy and social researches are also clear in the second stage of the project involving the Open University of Diversity and revolving round his studies carried out in Hasselt. This city is a meeting place of ideas where Vanmechelen studies biological and cultural diversity supported by a network of institutions (universities, private institutions and professionals). Specifically, beside the project on the chicken, three more researches are proposed in Venice, and they can all be enjoyed in real time. The results of such researches will be recorded in a virtual library.

Human development is always influenced by biological, cultural, and social factors. In Venice, the art historian Ines Dewulf will be carrying out for six months an anthropological study in the same space where Vanmechelen’s installation is displayed. Such study considers the CCP as its starting point, and its goal is to analyse the social implications the crossbreeding project can produce. The second project his held by Piet Stinissen, professor of medicine at the University of Hasselt, who will oversee a study on facial symmetry and attractiveness in children as a result of biological differences from parents. The third project will be overseen by the biologist Tom Aerts who will compare the Venice flatworm population living in Canal Grande with that from the Hoge Kempen National Park in Belgium in order to identify salient differences.

According to what Studio Barengo emphasises, with which Vanmechelen has realized some important glass sculptures for the exhibition Glasstress 2011, egg and chicken are the key subjects of the Belgian artist. The installation Born in Venice, conceived as an ever-evolving laboratory, introduces a new species in the world of contemporary art, and it continuously pushes the audience to interact with the field of research through a network of computers placed in the library of Palazzo Loredan. 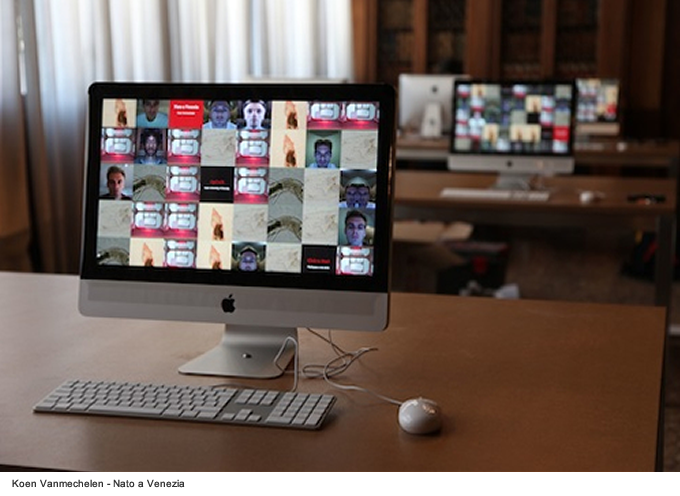 Vanmechelen‘s installation is a real disillusionment for those who expect to experience stunning or terrifying images the way it happens in experimentations involving arts and science. This installation is intentionally minimalist â” a series of Macintosh stations on each table of Palazzo Loredan’s library, an incubator with eggs, two screens placed in the adjoining venues and transmitting on streaming the newborn chickens and the two specimens that gave birth to them.

We can find an headrest placed before some of the Macintosh stations, a sort of memory coming from the 18th century when such devices were used for the stability of the poses. But you can still find them in X-Ray laboratories. These simple headrests take the partaker into the installation’s ambivalence â” on one hand it is a science laboratory where the subject is literally part of the research development, and on the other hand it is a photography, a self-portrait just with a click.

The exhibition has a double appeal â” first, the visitor is actively involved in the installation as intentional experimental subject for one or more projects contributing to collect genetic data on races. Such data will be used by the researcher to carry out an independent study on biological and cultural diversity. Visitors can access to the results, verify in real time the responses given by other visitors, and interact one another with discussion forums. Some of the answers given to the “How-would-you-describe-your-identity” question are really bizarre like “Melancholic, European, family man” and so on.

Second, this installation emphasises the permeability of boundaries between arts, science, and social research, against the belief that contemporary art can sometimes be hallow the way it may happen during big art exhibitions (or even festivals). An artist and the beauty of his work almost fade away in Vanmechelen‘s installation, and they leave scope to visitors, discussions and the beauty of ancient books of Palazzo Loredan’s library. 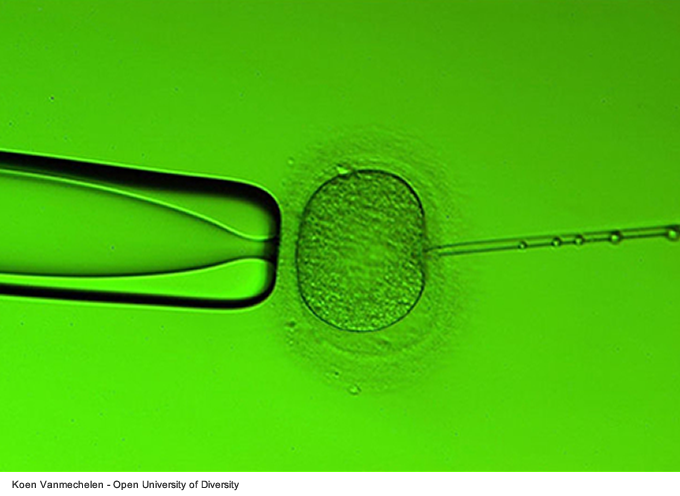 During the short break between questions, the visitor remembers the famous question “What came before; the chicken or the egg?” Aristotle’s answer was based on the theory of strength and actuality. Visiting the exhibition at Palazzo Loredan, chickens only appear on the screens, while eggs, protected in a cage and constantly monitored, would open in a short time. That is a magic moment, it is slow, hard. The artist Bill Viola has made such moment immortal in his memorable movie on personal identity, based on paying attention to nature, I do not know what it is I am look like.

Ines Dewulf, sitting at one of the library’s table, ensures the most sensitive visitors about the chickens’ future. She explains that the whole project has to be seen as a metaphor because what’s displayed is just chickens and eggs. That’s why we have to “put them on” a philosophy of identity and race.

But I think that there is no need to add that. Born in Venice already is everything it needs to be – chickens, eggs, experimental subjects, the beauty of the scenario where the installation is displayed, and a solid research. In Born in Venice, Koen Vanmechelen moves with grace, lightness and a little bit of irony between arts and science. It is a field where artists often take themselves too much seriously. At the ground floor, before the exit of Palazzo Loredan, among the Panteon’s marble busts of eminent artists, politicians, scientists, and literattes, suddenly appears a marble cock. This symbol of the CCP almost seems to wink at the visitors.