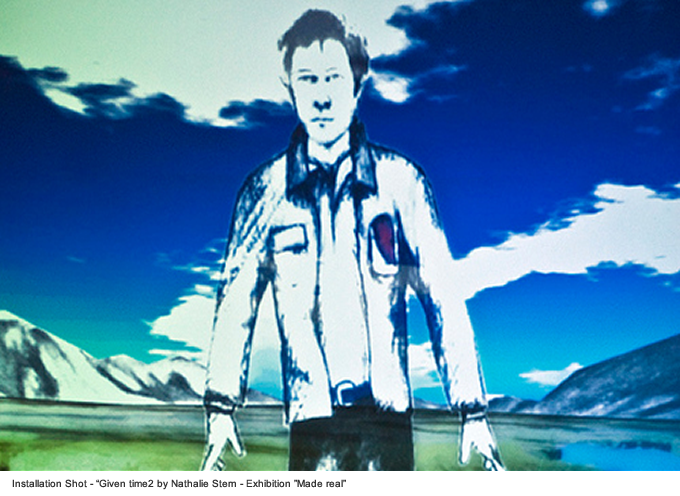 And we shall play a game of chess – Eliot, The Waste Land

Other echoes, Inhabit the garden. Shall we follow? Quick, said the bird, find them, find them, round the corner. Eliot, Four Quartets

Furtherfield Gallery is currently haunted by three ghosts. And the haunting is as stylish as we’ve come to expect there  elegant, carefully disposed and thoroughly good-looking.

The first ghost is the ghost of Marcel Duchamp, summoned by artist Scott Kildall in the piece Playing Duchamp. It’s an icily cheerful presence, not averse to a game of chess. You mount a step to a small white podium, sit yourself down at a laptop, click on a splendidly cheesy urinal icon and five or ten minutes later retire, comprehensively thrashed.

Kildall claims to have analysed records of Duchamp’s games and then incorporated his style of play into the chess playing engine at the heart of this piece. I have no way of knowing whether these claims are true or Duchampian. Given that the game of chess is now, in a real sense, all sewn up by the computer – done and dusted – Kildall could as well have merely embedded any fierce and high level chess programme into his stage set. It doesn’t matter. We buy it. The ghost walks, or at least plays chess. Our pride hurts. We were there, we know. 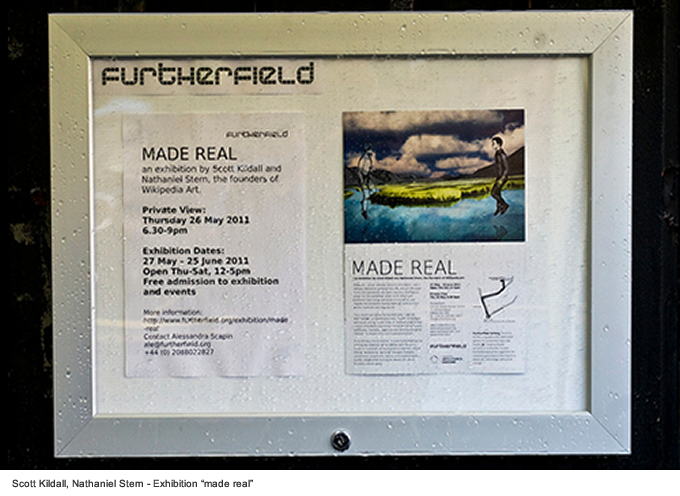 And we reflect, as a result, not only on Duchamp the retiree gentleman chess player, but on the artist too; and there is something in Kildall‘s conjuring that underlines and honours an influence that to me at least has not always seemed entirely benign, especially when we get down to the oh-so-numerous and mostly none too bright epigones. (And, irredeemably retinal, quite honestly the only thing I’d actually want to spend any length of time with is Nude Descending a Staircase. The Large Glass is to me – appropriately perhaps – dull. There, I said it.) Kildall’s piece is precisely not epigonic. It obliquely treats of Duchampian themes but it is its own work, genuinely engages and it could well be the final such piece on the subject that has the power so to do.

The second ghost is the ‘bloody child’ of the epigraph, Kildall and Nathaniel Stern‘s now notorious Wikipedia Art. The original work, an attempt to use Wikipedia as, not simply an art platform (misunderstood by many thus; hence: ‘why don’t you start your own Wiki and put your art on that?’) but to embed a generative, or at least multiply-authored work within Wikipedia according to its own rules and logic, was still born or, rather, had its infant brains dashed out on the rocks.

What remains? Acres of print-outs of discussion, ranging from the offensive, dumb and illiterate ones to commentaries you could spend quality time with. A brisk and cheery little introductory video in the lovable puppy-dog tones of Stern the über-enthusiast, with more sober interjections by Kildall, and a show-reel of remixes by others with which Stern and Kildall, with characteristic boldness and generosity, opened out the project.

It’s all gripping, in a museological way, but there’s no doubt that what we are left with are traces, shadows and fragments. Ghosts. It’s the perennial difficulty of representing something essentially performative and, as it turned out, ephemeral  hard to avoid simply documenting. But we can say a few things (and of course one of the interesting things about the project is the huge volume of commentary it has spawned, rendering it eminently capable of being discussed and footnoted on Wikipedia though not, of course, itself flourishing there). 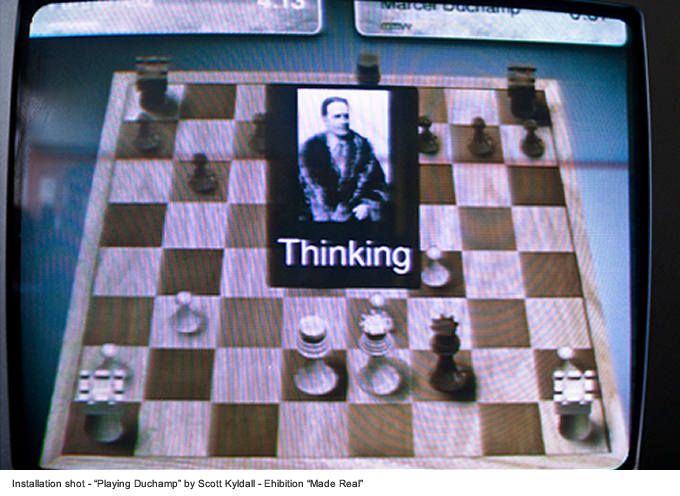 We can say that in a period when the word ‘investigate’ is massively overused in an art context, and usually quite fatuously so, Wikipedia Art genuinely did the job. It uncovered stuff and forced it to the surface, into the light. Like the irritant which begets the pearl, it forced the Wikipedia organism to put on display some truths about its own structure: the cyber-serf labour force, the deeply conservative priesthood of initiates with an ever proliferating set of arcane and bureaucratic rules and a pitifully rudimentary and apparently uncontested notion of what constitutes knowledge. Also – and this needs to be said – idealism, generosity and genuine hurt at perceived mockery, slight or vandalism.

We can say too, that in Kildall and Stern‘s attempt to do something that, frankly, looked from the start doomed to failure, there was a beautiful and inspiring utopianism. An act of willing life into being in the face of dullness. Defiance. Something convulsive. And that act of sheer will (something about its heroic, impossibilist quality, made me quote the slogan of 1968, “Sous Les Pavés, La Plage!”, early on in proceedings) in turn shines an unforgiving spotlight back on what is dull, unimaginative and routine.

I suspect in the longer run Wikipedia Art will prove to be about a good deal more than Wikipedia (or at least it will herald it). Artists are often the storm petrels of looming social convulsion and one can see why Wikipedia, familiar to and used by millions, standing Janus faced on the cusp of idealism and cynical routinism, might be an early test case of interesting times to come.

Lastly, the tutelary spirit of Nathaniel Stern‘s Given Time is the ghost of Félix González-Torres. In 1991 González-Torres created – assembled – a work, Untitled (Perfect Lovers) in which two battery powered clocks, set initially to the same time, sit side by side, eventually falling out of synchronisation as the batteries fail and they weaken and die at slightly different rates. Stern explicitly acknowledges this as a source (I say source rather than influence; influence is too weak) of Given Time. If it was a piece of music one might call it variation on a theme of. Stern retains the delicacy, tact, grace and indeed ‘deep structure’ of the original piece whilst inserting these into a new context (and this move will have consequences). 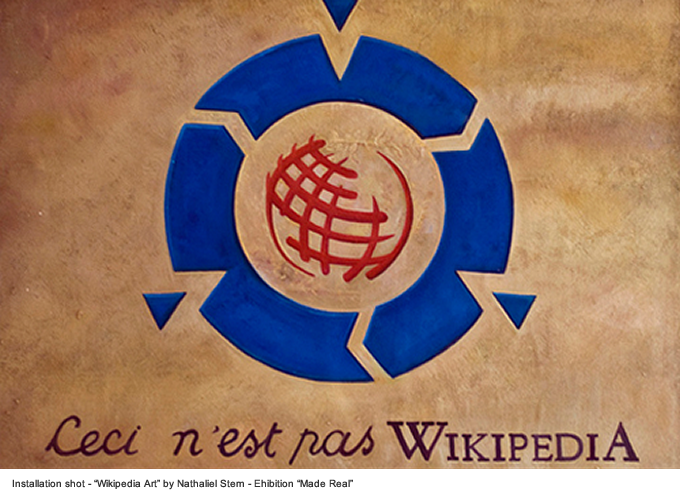 Given Time is easy to describe. Two Second Life avatars, projected from machines that are permanently logged in there, ‘hover’ in ‘mid-air’, ‘facing each other’ on opposing screens, such that each ‘figure’ is ‘seen’ through the ‘eyes’ of the other (I’ll stop now – you got the idea). The figures hover, blinking occasionally and from time to time moving vertically, slightly up and down as if subject to a strong breeze, though anchored invisibly.

In the distance, behind each figure, are mountains. Nearer by are reed beds and water. The water does not move, though it reflects the land above it. The mountains behind one avatar are darker and higher than the others, and there is a strong sense of the directionality of the light (and this was the same on the two periods, of an hour or so, I spent with the piece. I gather it is sometimes night.)

For me the overwhelming association of the piece, or at least of its look, is children’s book illustration. I don’t mean it in a slighting way. Some of the most powerful emotions of my life were connected with the explosive impact of relatively banal and schematic illustration, which I had not then learned was a type. Stern’s piece returns me to that childish consciousness. I find myself speculating, in very much the same way as I wondered as a child, what it would be like to live inside a book or what furniture thought, what the two avatars are feeling. 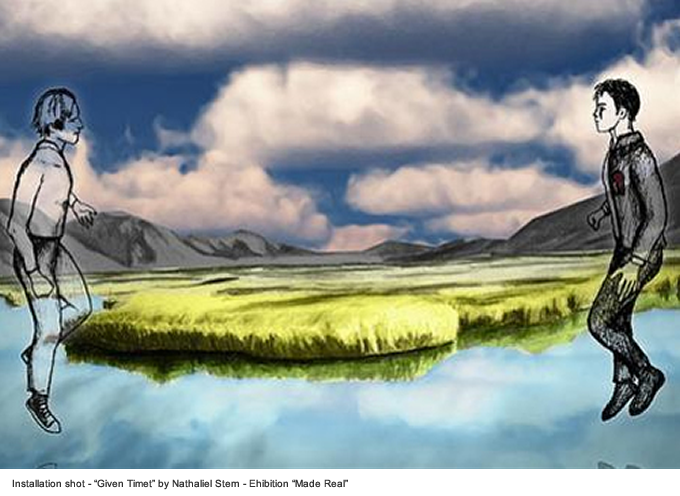 It’s not only González-Torres‘ concept Stern honours. González-Torres was interested in found and appropriated objects (often banal, mass produced, indistinguishable multiples) which he imbued with an extraordinarily potent poetry by giving them a twist (not the twist of a thriller or soap opera but a Möbius twist, around a hidden corner) and Stern brings the same intense poetic parsimony to Given Time. The birds that hover and call around the two figures were an off the shelf buy (there’s a wonderful moment during one pass of the bird on the darker screen as it dips behind a distant mountain and we realise its wingspan would be ten yards or more ‘in reality’ to be consistent with what we see).

Second Life itself, of course is off the shelf in the Web 2.0 sense. The reeds which wave in front of each figure’s feet have a curiously of-a-piece awkwardness. However, the two figures are anything but parsimonious in execution  carefully and richly drawn in pastels, graphite and charcoal they have a strong sense both of visual interrelatedness and of individual character. (It will be interesting to see the ‘patina’ that time brings to them. In thirty years I suspect we’ll see them as archetypes of men of about Stern’s age at the end of the noughties… more anchored in time and richer with wear in the same way as the characters in older movies are now).

It is this assemblage quality: the thin, the found, the patched, the borrowed and the luxuriant too, that lends the work much of its power  it sings out that it is a work: a complex weave of inter-related symbols, eye candy, suggestion and reference. Some of it we encompass intellectually, some we feel, some passes us, but not others, by.

Stern claims the work is about (continues) the theme of love, and this is clearly so. However it seems to me the piece is also very much about death. The figures hover there forever (and the upload-our-brains-to-computer crew spring forcefully to mind here) in a setting which is beautiful but finally cyclic and predictable. We go round and round. The slightly jerky movements as the figures deviate from their invisible tethers suggest, if not crucifixion, at the least a kind of imprisonment (perhaps the good old science fiction force-field trope).

Again: how would that feel? What do they think? Love they might, for ever and a day, but their immortal stasis takes them further and further away from what it is to be a human being, which is to live and die in time (and which Perfect Lovers expresses so clearly; that piece made shortly after the diagnosis with HIV of his lover, Ross Laycock, five years later González-Torres himself was gone). 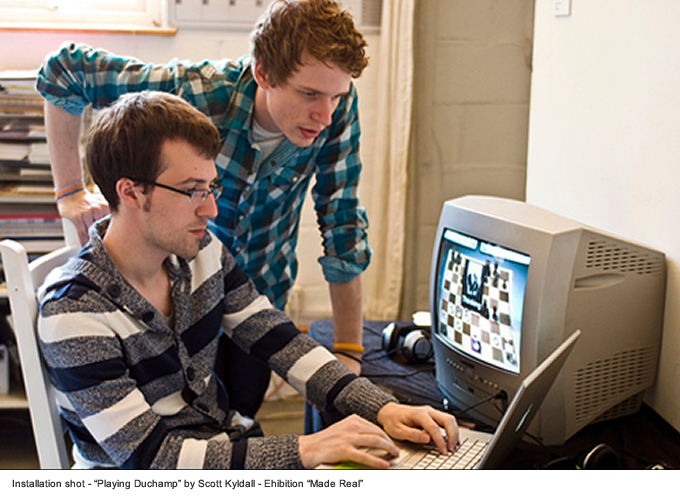 In speaking as strongly as it does to our temporality the work allows the spectator – a breathing, pulsing human being, who was born and will die, who has been Given (a little, specific) Time – to experience a sharp and painful beauty that the immortals will never be able to experience. Finally, just to be clear, it should be evident I don’t, of course, believe in the supernatural. The ghosts here are metaphors and, like all metaphors, have their limits. They can help to limn the concrete but never encompass its concreteness (see hauntology for the thing over-shoehorned). I do however believe in enchantment.