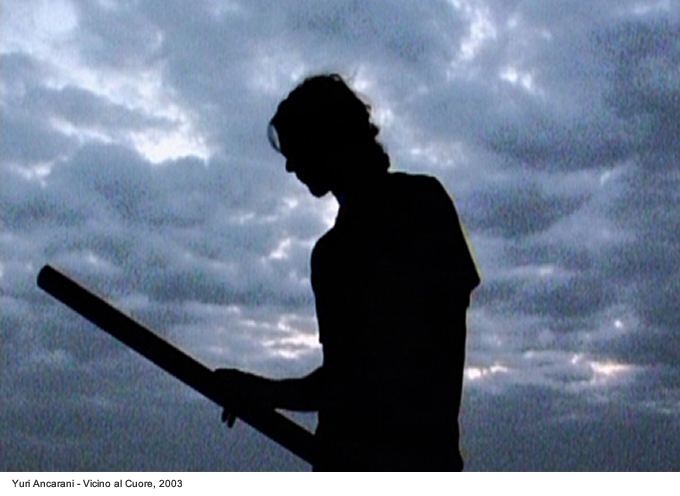 Yuri Ancarani (Ravenna, 1972) likes to define himself a “visual artist/film maker”. He developed his research by starting studying his territory, the land where he was born: the Riviera Romagnola. As for his music video Vicino al Cuore (2003), work that he claims to love the most, or Kras (Bora, 2011) or Carrara caves (Il Capo, 2010), he always succeeds to catch the invisible aspect that transmits to the public the meaning of those places.

After attending various Film Festivals all around the world, receiving many awards such as the Silver Gentian for the best short film at the 59° Trento Film Festival, and after his presentation of Il Capo at the 67° edition of Venice Festival for the Orizzonti section, Ancarani found himself thrown, almost by accident, into cinema.

Among his most important collaborations there is his last one with Maurizio Cattelan and Pierpaolo Ferrari, for the new editorial project Toilet Paper, in which Ancarani deals with images in motion. His last movie, Bora, will be presented on July 4th 2011 during the Weird Tales exhibition by Franco Masotti and Christopher of Bronson Productions, exhibition that, for two years, has been a special section of the Ravenna Festival. Held for 22 years, the festival is a schedule of exhibitions ranging from theatre, music, classic and modern dance. 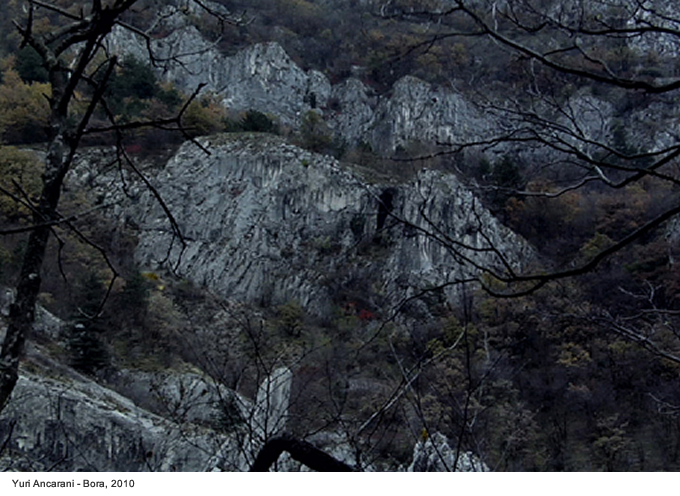 Bora is commissioned and produced by the Ravenna Festival in collaboration with the Galleria Comunale d’Arte Contemporanea di Monfalcone. It will be screened as a visual that comes with a live performance by Steve O’Malley, an American guitarist and composer, founder of many drone, doom metal and death/doom bands such as Sunn 0))).

Alessandra Saviotti: How did the collaboration with Steen O’Malley for Bora start?

Yuri Ancarani: I have listened to his records for long time and I was listening to his music even during the editing of my video. I soon realized that his music could work very well with my images, so I decided to contact him and send him a “making of” explaining what I wanted to do with that material. The collaboration started from there.

Alessandra Saviotti: Do you consider Bora a performance?

Yuri Ancarani: I like to think of it as a show. It was born for the new section of contemporary music of the Ravenna Festival. Lately, the trend to mix contemporary music with visual experiences is evident. I think the reason behind such trend is that while in the past the musician was a sort of “stage phenomenon”, now, with the help of new technology, he is often sitting behind a computer, even during his performances. I believe there is the need to create new movements and attract the public in a new way.

Bora, however, still shows O’Malley playing on stage. Yet the difference is to be seen in the concept of the movie. Unlike other works of mine, this one lacks of a well defined subject. I created it by thinking that someone had to be on stage, under the spotlights. He is the main character of my music video. 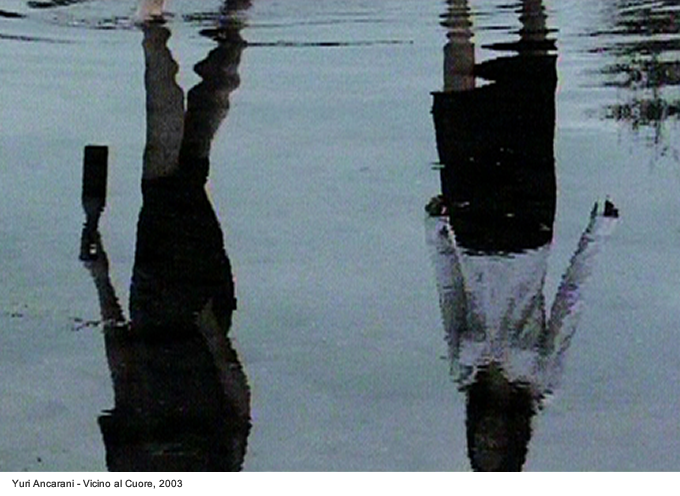 Alessandra Saviotti: Where does the idea of making the video at Kras come from?

Yuri Ancarani: All became real when I got invited by Andrea Bruciati (Director of the Galleria d’Arte Contemporanea di Monfalcone), along whit other artists, to develop an artistic project on Monfalcone’s territory. I made an inspection when Bura wind was blowing very hard. Each time the wind blew too hard I would come back to Kras. Thanks to this inspection I developed a completely “different” perception of the territory. In two years I went to Kras and other different places six times.

From the visual point of view the most significant and spectacular one is Val Rosandra: it’s like the place is able to tell stories, and it is the easiest place to cross the border between Italy and Slovenia. It is also the place where the wind grows stronger, and takes the name of Sella di Bora (Bura’s saddle). Here the wind is incredibly strong, but it’s impossible to see anything of it, as the landscape is entirely made by stones and nothing moves. One can slightly perceive the strength of the wind, but it is like nothing really happens.

Music is a live improvisation that comes with the video. Although the video has its own story and its own development, without the music it would be plain and insignificant. O’Malley will make a different performance every time the work will be presented, working live on images.

Alessandra Saviotti: Speaking of another recent work of yours, Il Capo, the aspect that made me think the most is the strong opposition between a physical and “violent” presence of characters, environment and heavy industry, with soft and delicate actions and gestures. What do you think of it?

Yuri Ancarani: I think the delicacy and gentleness of actions is due to the kind of work I depict: the quarrymen have to work with a more precious and expensive marble, without spoiling it. I wanted to highlight that the “bestiality” of the characters is not so hard and through the camera I preferred to give importance to the perfection of their work and actions. I looked for the cave’s best angles, in order to make it seem a perfect environment, a kind of set, although it is actually a construction site. Unlike video makers, that approach the world of work as a subject and search for its roughness as if they were making reportage, I am more interested in underlining the spectacular character. This is the reason why I want everything to be perfect, almost as a constructed set. And trust me, to find perfection in these places is really hard!

Alessandra Saviotti: How much did the filming of Il Capo?

Yuri Ancarani: It took about a year to shoot the scenes that come one after the other and show how the marbles are obtained. When the quarrymen were ready to extract them, they would call me to shoot the scenes. I made the ones on the top of the cave in about a week, even though it seems like one day of work. I could have been faster, but I was shooting in a construction site, people could not stop working just for me. I decided to make a 35 mm film which gave me the chance to get exciting images. 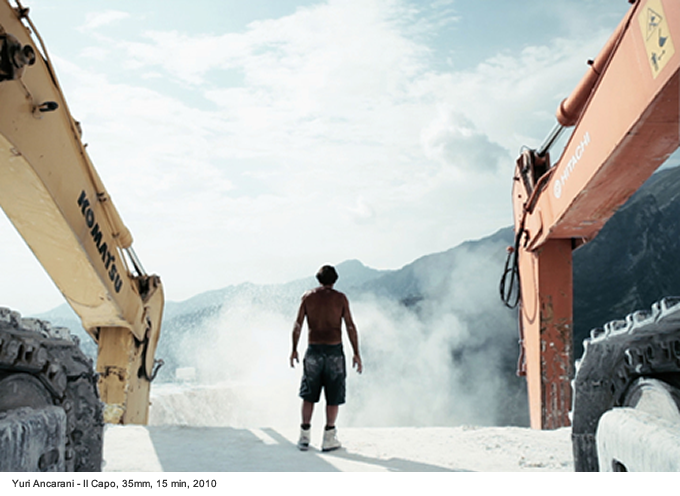 Alessandra Saviotti: One can perceive a particular care for sound, other than image

Yuri Ancarani: Actually sound was the aspect I cared for the most. I have worked with Mirko Mencacci, a real master of sound engineering. He agreed to work with me because, even after thirty years of experience, I always involve him in projects that make him experiencing something new.

Alessandra Saviotti: How did you manage to enter such a hard environment?

Yuri Ancarani: I guess it’s the enthusiasm that I put in my projects that persuades people to join me. But it’s obviously a long process.

Alessandra Saviotti: Do you think of yourself more like a director or a video maker?

Yuri Ancarani: It’s complicated, I consider myself a “visual artist/filmmaker” but I lately call myself a “video artist”. It sounds more comfortable, even though in the world of art it is an obsolete definition. Let’s say that in the field of art I usually play the part of a filmmaker, while in the field of cinema I am an artist! 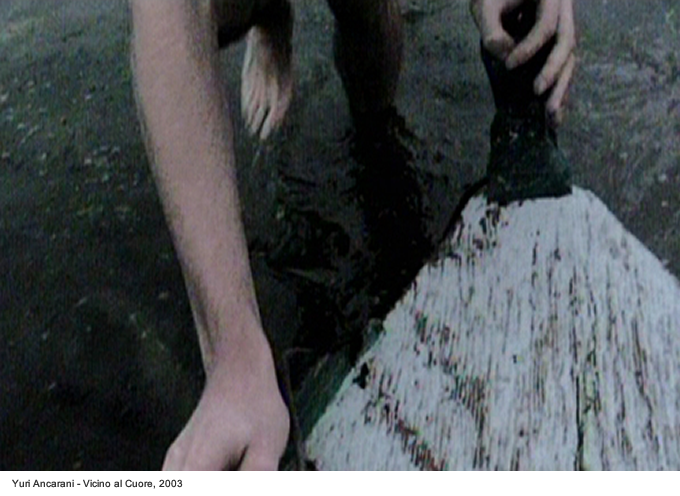 Alessandra Saviotti: So what were you at the Venice Film Festival, an artist or a filmmaker?

Yuri Ancarani: To Orizzonti, the section dedicated to international cinematographic research and made of the showed works, I came as an artist. It was pretty hard, because the film selection was made on each motion image. Fortunately, last year the movie duration has been modified and they added the categories of short, medium length and long movies, which means a movie doesn’t necessarily need to have a standard duration, but the duration that is suitable for the work. In the world of art 15 minutes have their own meaning; it’s not that the less it takes to deliver the message the better you are. In the cinema is quite the opposite. A short movie is like a sort of training that has to be done in order to create “long” movies.

After that, my film has been presented in various festivals, like in Amsterdam at the IDFA (24e International Documentary Film Festival Amsterdam), which is one of the most important documentary festivals in the world, in the United States at the SXSV (Austin  Texas), at the True/False Film Festival inMissouri and at the Ann Arbor Film Festival in Michigan, and in Paris at the Cinema du Réel at the Centre Pompidou, where a still of it has been chosen for the official image of the festival, which means every judge knows of its existence.

Alessandra Saviotti: Both Bora and Il Capo were shot in unknown territories, while your first works was shot in Ravenna…

Yuri Ancarani: It’s been 10 years since I worked in Ravenna and Romagna with a series of video that will remain a sort of passage. Yet, like wine, they need some time to become tasty. In the Eighties Pier Vittorio Tondelli wrote about this territory. I intend to make something similar but with a language that is closer to us, as for example video and music videos are now. In fact I even made 2 minutes long videos. All came from a particular experience.

I live between Ravenna and Milan, and the latter is a barren city. In Milan you can’t think about working with your head. It’s a good showcase maybe, but it’s not the right place for an artist to be creative. The province is better to do research, but you cannot live there for long. If I had always lived in Ravenna I surely wouldn’t have captured some particular aspects of my work, I wouldn’t have developed a better technique and I wouldn’t have become a better artist.

I made seven works about the Riviera territory, even if I wanted to make ten… and I already have the subjects, but I don’t have the time.

Alessandra Saviotti: Do you have any particular reference to create your work?

Yuri Ancarani: Well, I have passions, but no particular references. Let’s say that at the moment I am interested in the photography of architectures instead of in technique, shots, ect. I follow my instinct.