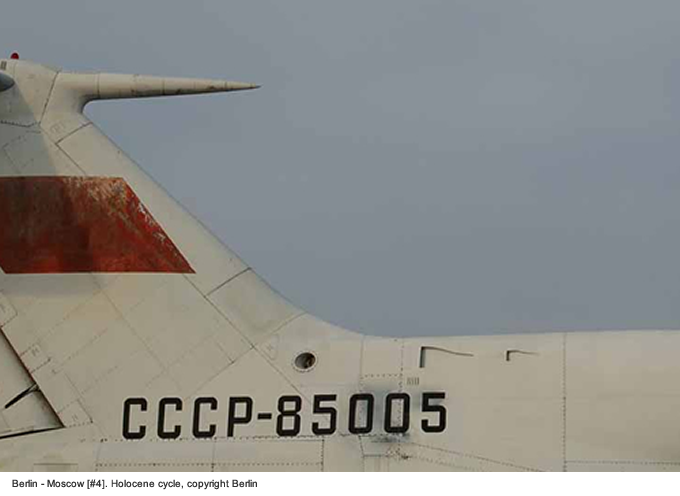 Teatro a Corte brings European theatre to the residences of the Savoy House  in Turin, under the accurate artistic direction of Beppe Navello. The event, that takes place during the weekends from July 7th to July 25th 2011, presents a selection of 31 theatre companies coming from 12 different countries. They will stage contemporary performances ranging from scenic arts to theatre hybridization, dance, contemporary circus, and also equestrian, visual and physical theatre, including installations and videos.

We discovered Teatro a Corte (http://teatroacorte.it/) in 2010, after deepening the research of one of the guests of last edition, the choreographer and videoartist Billy Cowie, who confirmed, during his interview http://www.digicult.it/digimag/article.asp?id=1864, the great attention that the festival gave to experimentation and convergence of artistic languages and new forms of expression.

This year Teatro a Corte opens with the Giornate del Teatro (Days of theatre) and the Victoria Thierrée-Chaplin‘s national première, with the special participation of celebrities like Balletboyz, Lucilla Giagnoni, Catherine Marnas, Lucia Poli and new young artists, Nuove Sensibilità. At the core of the festival programme there is the Russian showcase, aimed to celebrate the year of the cultural relationship between Italy and Russia. In this section it is possible to find two of the most interesting experimentation and multimedia projects: Akhe Engeneering Theatre and Berlin. 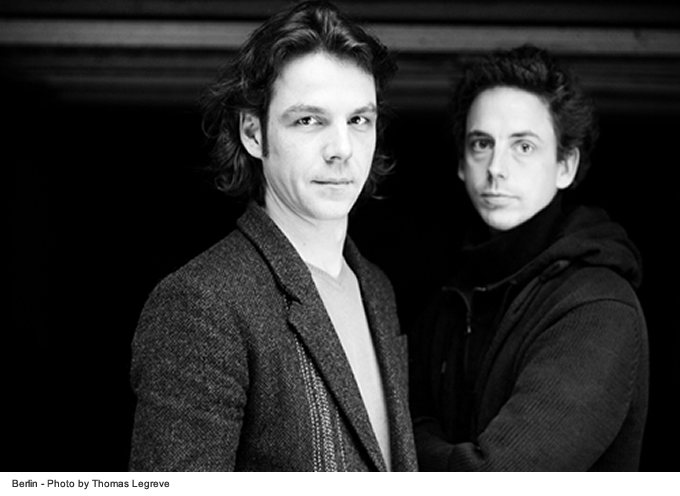 We interviewed Berlin before their participation to Teatro a Corte 2011. Berlin is a Belgium-based collective, built around Bart Baele and Yves Degryse. It started in 2003, when the group from Anversa was formed together with the actress Caroline Rochlitz, with the aim to develop a project dedicated to cities or regions able to tell stories of important and universal identities and humanities.

Since the beginning, Berlin worked on 2 cycles: Holocene and Horror Vacui, made of different performances ranging from documentaries, video, installation, performance and theatre, taking inspiration from reality and history, and combining research and investigations with interviews to privileged witnesses.

Berlin‘s work is dense and stratified. It compares itself with different languages and refuses any classification. For this reason, it needs to be carefully analyzed and examined in order to understand its different themes, which are: the society, told by its own most truthful and contradictory aspects, and the complexity of cities, whether urbanized or lost in a desolate landscape.

The work presented in Turin this year is the fourth of the Holocene cycle. Moscow (’70) is a video portrait of a city made through the voice of its own people. By interviewing people from Moscow and giving back their words, Berlin created a bright and merciless portrait of a place and its people from an objective and documental perspective, completed by the suggestion of the setting and by the soundtrack. We deepened the nature of this work and Berlin’s research through an interview with Yves Degryse. 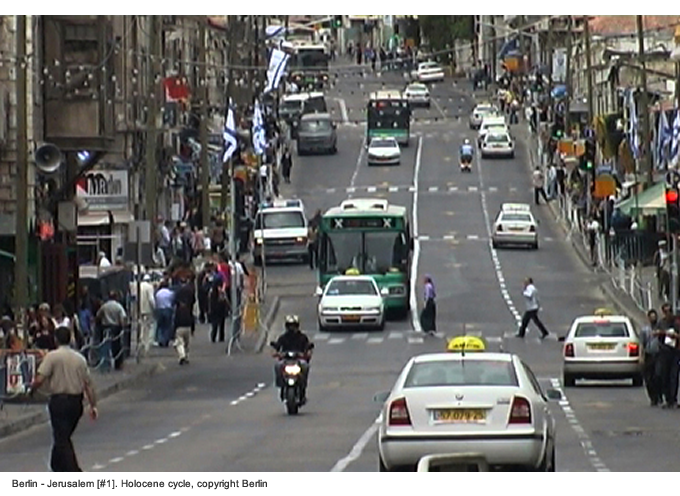 Silvia Scaravaggi: You have been invited to the Teatro a Corte Festival to present your fourth work related to the Holocene cycle: Moscow. How is it going to be?

Yves Degryse | Berlin: Last year we presented the Bonanza performance and the Iqaluit installation in Turin. This year we’ll present the Moscow project, which is part of the Holocene cycle, a series of city portraits of Jerusalem, Iqaluit, Bonanza and Moscow. The end of the cycle is unknown, we are planning to make other city portraits.

Right now we are working on a new cycle called Horror Vacui. Its first performance, Tagfish, was last year, while the second one, Land’s End, is still in progress.

Each time we visit a city, we work hard on the planning and make deep research before shooting. While researching about Moscow, we focused on the shape we wanted to give to the work, on a sort of tent, on our structure as a specific reference to the place of origin. Moscow is a very overwhelming city, the atmosphere and the people are harsh when it comes to try to enter their daily life. We tried to combine these characteristics and to transfer this atmosphere inside the tent. In this way we developed the structure of a big tent with six moving screens that surround the audience who, once inside, stands and watches the scenes from different point of views.

A string quartet and a pianist play live the soundtrack of the movie as a tribute to the circus atmosphere, even though the work itself doesn’t show a single reference to circus. Moscow is a theatre performance and a city portrait. 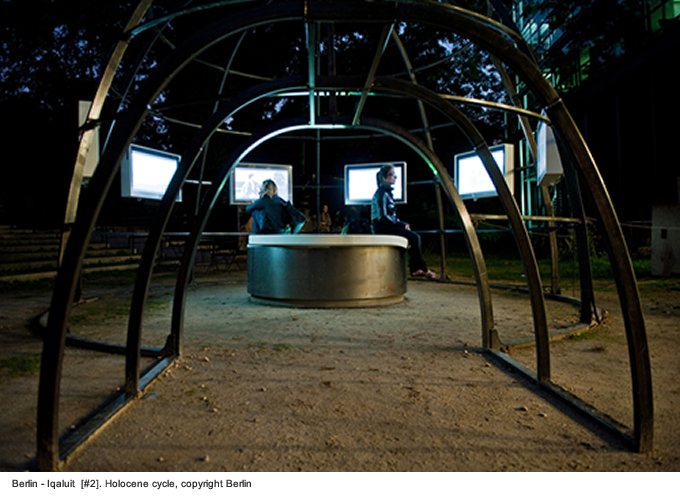 Silvia Scaravaggi: Have you ever shown this performance in Moscow??

Yves Degryse | Berlin: No, but sometimes in the audience there were people from Moscow and their reaction have always been very positive. Performing in Moscow would be problematic. People who appear in the movie are somehow exposing themselves, and we wouldn’t be able to protect them.

Silvia Scaravaggi: How do you think the audience in Turin will react to this work? Are you interested in exploring their participation?

Yves Degryse | Berlin: Last year the experience was fantastic. This year, with Moscow, we are showing the atmosphere of a city but at the same time also universal themes. On one hand there is the image of a government and its mechanism that tries to control the situation. On the other hand you can listen to people from Moscow talking about their life and the corruption of the system. It’s a realistic work, based on research.

Silvia Scaravaggi: Your work is a combination of many forms of art: video, theatre and cinema. How would you describe your approach?

Yves Degryse | Berlin: Our multidisciplinary approach is something natural and logic, we want to be free to understand the needs of each project. We try to tell a story in the best way possible, and in order to do so we choose from different disciplines. We use the video very much, but it’s not mandatory. It depends on the city, for Moscow the video was simply perfect. Now we are planning a project about Lisbon, it will be neither performance nor video. It’ll be a totally different project. 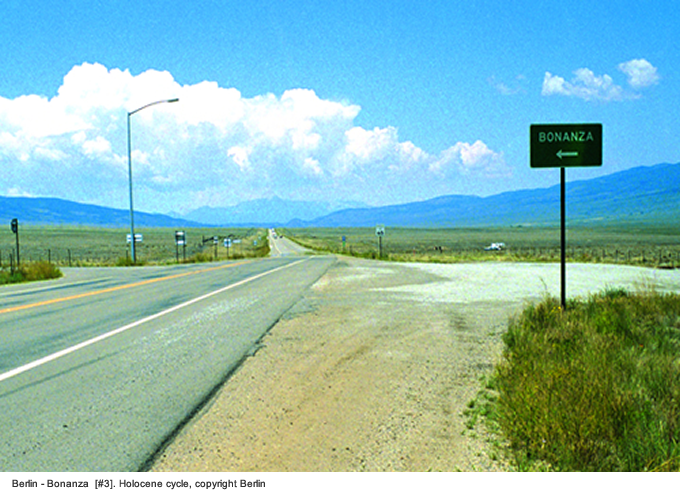 Silvia Scaravaggi: Why is the choice of a city or a region always at the core of your projects?

Yves Degryse | Berlin: For the same reason that a director uses a good script. There is great material in everyday life. We have to find something in the city that tells more than the city itself. The story needs to have a universal point of reference. For example, Bonanza is the portrait of the smallest official city in Colorado (USA) with seven residents, five houses, a city mayor and a city hall. We described it through five screens and a scale model. It was shown in Korea and the audience identified itself with some aspects of the city’s daily life.

Silvia Scaravaggi: Is the city with its own characters also living a new life on stage?

Yves Degryse | Berlin: This is a difficult question. When we edit our work we have a better look, grasp more information and have a deeper understanding of what we filmed. This aspect really focuses on the moment of creation. Tagfish is a good example to answer this question. The work tells the story of sheik Hani Yamani and his ideas for the future development of Zollverein, a UNESCO world heritage site, an industrial complex that could be used in new different ways. We filmed the negotiation, interviewed people separately, and asked them some questions.

In Tagfish they’re sitting around a table for one hour. In reality this meeting never happened, but what you see on stage, on the screen, is that they are really talking to each other. In this sense the work makes them living a new life on stage. During the editing we have a very strict rule though: we are not allowed to extract people from their context. We are very careful not to ascribe to them meanings that are different from reality. 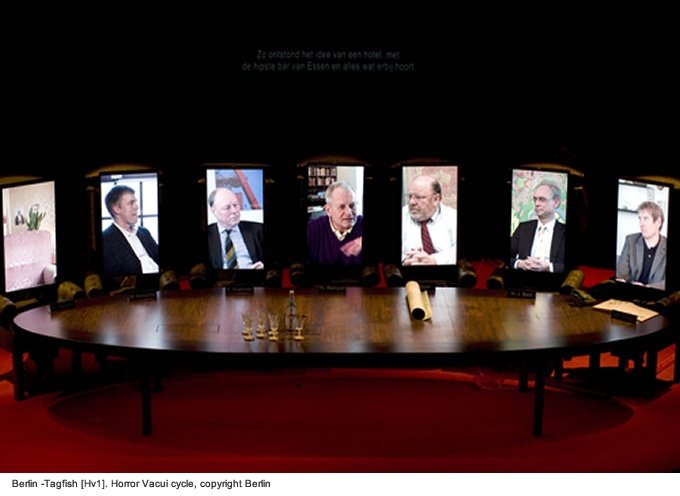 Silvia Scaravaggi: Can you tell me about Land’s End, your last work for the Horror Vacui cycle?

Yves Degryse | Berlin: It is about a murder case at the end of the 90s, it takes place in Belgium. The owner of a pancake factory, a Belgian guy, is murdered by a French killer hired by his wife. Three months after his death, the police discover they are guilty, they are imprisoned, the wife in Belgium and the killer in France. During the investigations, a confrontation between the two seems to be necessary but France does not allow their extradition. For this reason, they find a farm at the border between France and Belgium, draw a line through the leaving room, place one chair on both sides of this imaginary border, and then the meeting can start

We are still working on it, Land’s End will be premiered on November 2011