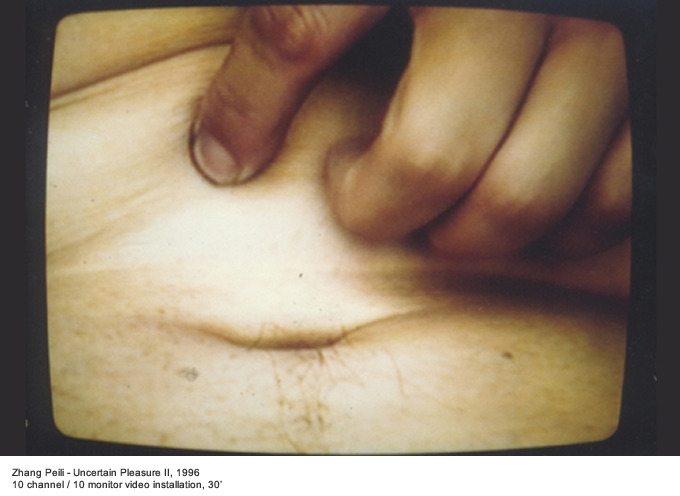 Zhang Peili is an enigmatic figure: while he is widely respected in China as a pioneering video artist and a progenitor of the use of electronic media in the wake of the 85 New Wave movement of the mid-1980s, his international reputation relies primarily on a small number of survey exhibitions motivated by multicultural agendas and staged amidst work of vastly divergent practical initiatives.

As the first retrospective exhibition of his work launches at the Minsheng Art Museum in Shanghai on 16 July 2011 (and just months after one of his early paintings was auctioned for a shocking HK$23 million during the controversial Sotheby’s sale of a portion of the Ullens Collection in Hong Kong), the time is right to rehabilitate his practice within the trajectories of media exploration. Especially if we consider the key role of the artist practice in the globalization of a very particular aesthetics of electronic media at an historical moment that almost perfectly coincided with the opening of the Chinese cultural universe.

Zhang Peili was indubitably a central figure of the 85 New Wave movement, playing a role in the founding of the Pond Society collective and becoming a core advocate of the school known as “rational painting.” In 1988 he created what is commonly known as the first piece of video art in China, 30×30, and started a sustained investigation of video and related media including photography, installation, and electronic art. 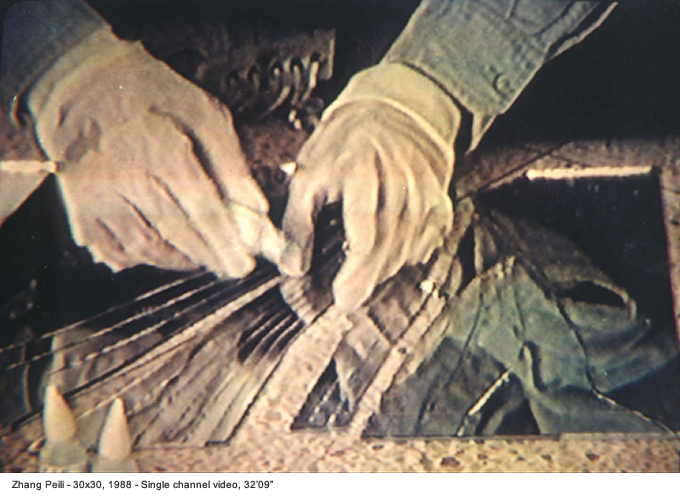 Typically adopting a minimal or reductive position that creates an essential relationship between the aesthetics of video playback technology and the moving image itself, his video installation focuses on questions of perceived reality, media convention, individual agency, and spatial structure.

Between 1988 and 2011 his video practice has undergone a number of significant shifts. He began with the cool and contained painting of the mid-1980s and then moved into the aesthetics of boredom and control in his first video projects, including Document on Hygiene No. 3 (1991), in which the artist calms and washes a chicken at the center of the frame.

The mid-1990s saw classical reworkings of the relationship between content and spatial form, as with Uncertain Pleasure II (1996), in which a hand scratches every corner of a naked body depicted only in fragmentary close shots across 10 channels, or Water: Standard Edition of Cihai (1991), for which a television announcer reads a dictionary entry as if it were the evening news.

And then there are the appropriation and remix works, as with Last Words (2003), for which Zhang Peili edits together found footage of Cultural Revolution-era propaganda films to create an uninterrupted stream of the dying words of martyrs. Finally, more recent works involve interactive closed-loop systems like Hard Evidence No. 1 (2009) and theatrical scenes like A Gust of Wind (2008). 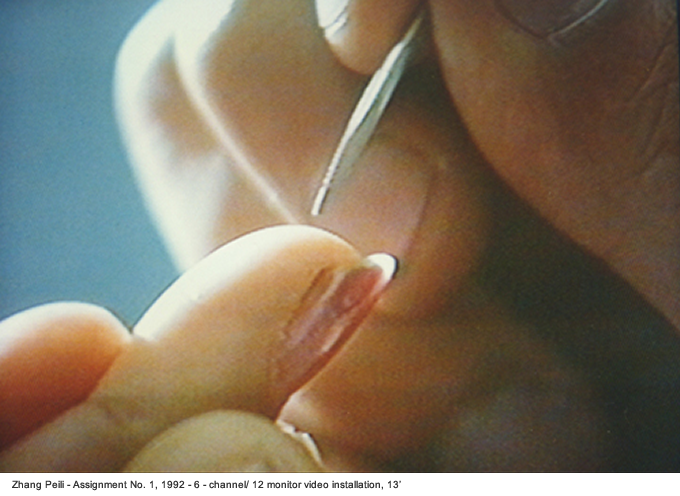 This trajectory is, perhaps, most valuable for the picture it presents of the simultaneous globalization and localization of media aesthetics, offering a case study in the unmooring of concepts like the aesthetics of boredom and their ultimate settling into new roles in new cultural concepts.

Aside from his ongoing work as an artist, Zhang Peili was also the founder of the new media program, now known as the School of Intermedia Art at the China Academy of Art in Hangzhou, where he currently leads a studio in embodied media.

These two roles–as a historically significant practitioner and as an educator– have made Zhang enormously influential, particularly over younger artists working in electronic media or more alternative modes of production. A reevaluation of his practice in terms of his approach to the uses of new media, then, could be enormously instructive for the understanding and contextualization of experimental art in China today.

The following texts are excerpted from an upcoming publication entitled “Certain Pleasures: A Zhang Peili Retrospective” with the gracious permission of their authors and the Minsheng Art Museum, reproduced here in the hopes that they might offer a potential first foothold for this critical work for observers of media art globally. 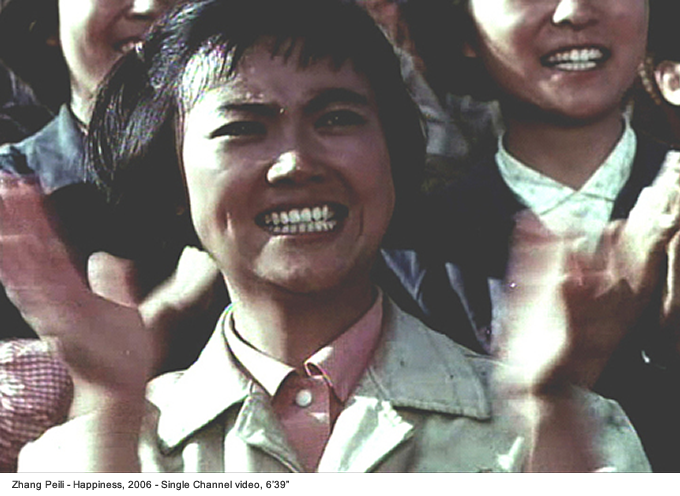 Excerpts from Huang Zhuan, An Antithesis to the Conceptual: On Zhang Peili, portions of which were first published in Chinese in a different form in Artistic Working Manual of Zhang Peili, Lingnan Fine Arts Publishing House, 2008, and which will be appearing in full in English for the first time in Certain Pleasures: A Zhang Peili Retrospective, ed. Robin Peckham, Minsheng Art Museum, 2011 (forthcoming).

As said, Zhang Peili produced his first video work, 30×30, in 1988, which earned him the title of “the father of Chinese video art”. Now he says that, at the time, he only wanted to use the media of the domestic consumer-grade video camera to create something different from the aesthetic model of television: “I wanted to produce something that would make people feel bored and perturbed, something that would lack the ability of concept to incite cheerful emotions, something that could make the viewer become conscious of the existence of time. The temporality of video fulfilled these requirements precisely.”

In a later conversation, Zhang would go on to repeatedly raise the notion that in his work the element of time attempts to resist the linear narrative of the traditional cinema and the entertainment function of television. In fact, the proposal for this work was prepared for the Huangshan Conference (formally known as the 1988 Chinese Modern Art Production Forum). The conference is seen as a continuation of the Zhuhai Conference of 1986, making it an important collective gathering in the wake of the 85 New Wave, and a direct precursor of the China/ Avant-Garde exhibition that would take place a year later.

Compared to the Zhuhai Conference two years prior, however, the situation of the New Wave had already undergone a considerable shift. The pan-philosophical and pan-cultural stance of the New Wave movement gradually entered a stage of decline in light of the attacks launched by the analytical and critical forms of conceptual art. It became obvious that the original hope of the leaders of the New Wave to reorganize its efforts through a collective meeting would fail to achieve the general consensus of the Zhuhai Conference. 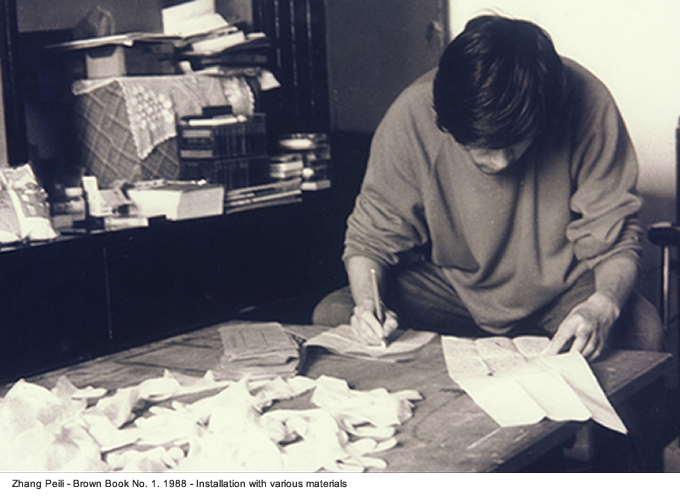 According to Zhang Peili, “It was not long after 1985 that we stopped liking the word ‘movement.’” This is the attitude with which he created the proposal for 30×30 and brought it to the Huangshan Conference: “I actually had something of a conspiracy in mind when I was composing the idea for the work, but it was ultimately never realized. At the time every household started to have a television and would sit in front of it almost every evening, because it was something new.

At the same time the Sony domestic video camera also arrived in China. For the 1988 forum on modern art in Huangshan artists were formally requested to bring new work for discussion and exchange, the content of which was not subject to any restriction. I suddenly thought I should make a video, three hours long, in which the content was not important at all.

I wanted to shut everyone in a room locked from outside for three hours, while it was playing. I would have opened the door only after the video was finished. But in the end I didn’t have the courage to lock the door. I was a bit nervous. After playing the video for two minutes people started to press me, saying that it was enough and that they already got the idea.

Even Gao Minglu asked to fast-forward, so that the three hour video actually only lasted 10 minutes. No one had the patience to watch it. Afterwards some people were particularly worked up, thinking it was really great, while others told me to take it back and edit it carefully, saying that the video should be different in shot and rhythm.”

If this first encounter with this maiden video work seems understandable under the circumstances of the time, the fact that that monotonous piece–shot from a fixed position and without any post-production editing or sound engineering–would become the first long-term talking point of Chinese video art history was, perhaps, unexpected. 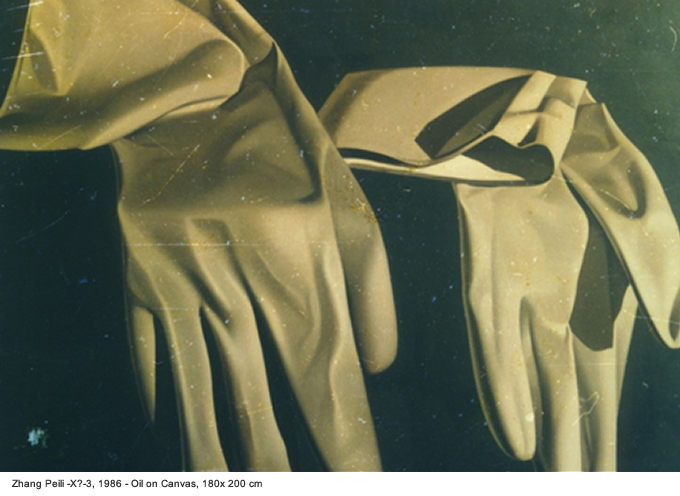 Excerpts from Paul Gladston, Low Resolution: Towards an Uncertain Reading of the Art of Zhang Peili, which has been previously published in Eyeline 69, Queensland University of Technology, 2009, and Yishu, Art and Collection, March/April 2009, which will be appearing in a new form and in Chinese for the first time in Certain Pleasures: A Zhang Peili Retrospective, ed. Robin Peckham, Minsheng Art Museum, 2011 (forthcoming).

Zhang Peili’s use of video as a means of citing/reproducing/manipulating texts appropriated from other sources suggests a strong affinity with the anti-essentialist tendencies of Western postmodernism/poststructuralism. At the same time the “good” cyclical form of A Gust of Wind as well as Zhang’s own interpretation of the wind as the index of some kind of transcendental-ineffable force points towards alternative readings, based in the vernacular metaphysics of Chinese Daoist/Chan Buddhist thought and action, might be referred to, with reference to the writings of Paul Gilroy, a resistant form of “anti-anti-essentialism.”

In shuttling inconclusively between these two readings, Zhang’s work as video art can be seen to uphold the Western(ized) notion of a culturally hybrid Third Space, while at the same time actively seeks to problematize the use of that notion—at least in its most abstracted form—as an unquestioned basis for the interpretation of contemporary Chinese art.

Paul Gladston: Let’s start with your recent exhibition, A Gust of Wind at Boers-Li Gallery in Beijing. You are quoted as saying in the catalogue: “This

Zhang Peili: “Yingxiang de shishi” and “Shishi de yingxiang” sound similar. The difference is manifested in the change of the word order. The two are different concepts. In both cases, “yingxiang” and “shishi” are in a relation of a noun to an adjective, as with the pair “my son” and “son of mine.” One is the main body; the other is derived from it. Video was derived from reality, and reality was captured by video; that is to say, video was used to record reality. However, video has actually become a kind of dominant language that pervades people’s consciousness.

It creates realities, and these realities also influence people’s lives or minds. The reality produced by video is sometimes even more realistic than reality itself. At least, it gives people the illusion of its own reality. This is why I have the following question: what is the function of video and its relationship to reality? I don’t think I can give a simple answer to that question, or at least it’s very difficult to give an exact answer. 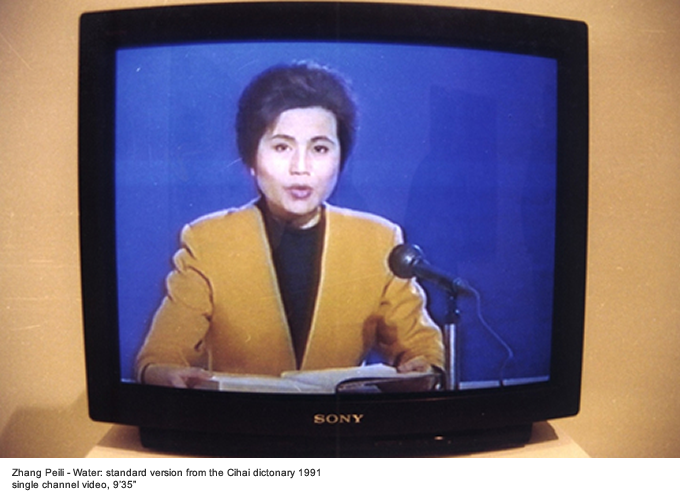 Paul Gladston: A Gust of Wind signifies a catastrophic event: the violent destruction of a richly furnished domestic setting by a sudden storm. Why did you decide to stage such an event as it might be carried out in a film studio and then represent/reproduce it through the use of multi-channel video?

Zhang Peili: I’ve always believed that people live in an illusion and that there is some kind of hidden force or “superpower” behind this illusion. This superpower is not controlled by human beings and is not subject to perception. What we perceive or discover is not the superpower. Some critics thought that some of my early works, such as Document on Hygiene No. 3 (1991) and 30×30 (1988), had something to do with politics. I’m not sure about those interpretations, and I don’t want to explain it any further.

What I felt during the early stages of my development as an artist was that there is a kind of underlying force or power. Sudden changes or disasters, which have been caused either by nature or human beings, made me realize that people live in an illusion, and this feeling has become stronger as my career as an artist has developed. All these beautiful and supposedly stable states are so fragile. They are just illusions. Changeable and destructive states are inevitable. THEY are the realities.