The “scoppiatore”. The Intonarumori By Luigi Russolo 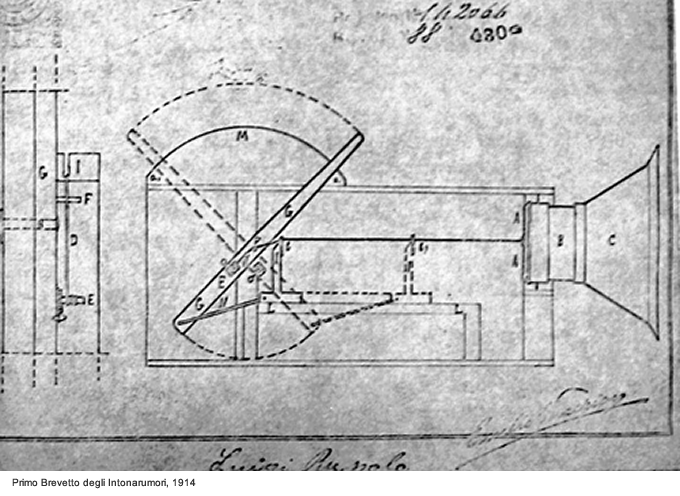 “Let us cross a great modern capital with our ears more alert than our eyes, and we will get enjoyment from distinguishing the eddying of water, air and gas in metal pipes, the grumbling of noises that breathe and pulse with indisputable animality, the palpitation of valves, the coming and going of pistons, the howl of mechanical saws, the jolting of a tram on its rails, the cracking of whips, the flapping of curtains and flags.

It is June 2, 1913. During a Futurist evening at the Teatro Storchi in Modena Luigi Russolo presents to the public the first of his Intonarumori, the scoppiatore. The public response is symptomatic of its lack of preparation in assisting to such performance. In a newspaper of the time “La Gazzetta dell’Emilia”, the review on 3rd June 1913 is entitled “The Futurist happy evening at the Teatro Storchi”. 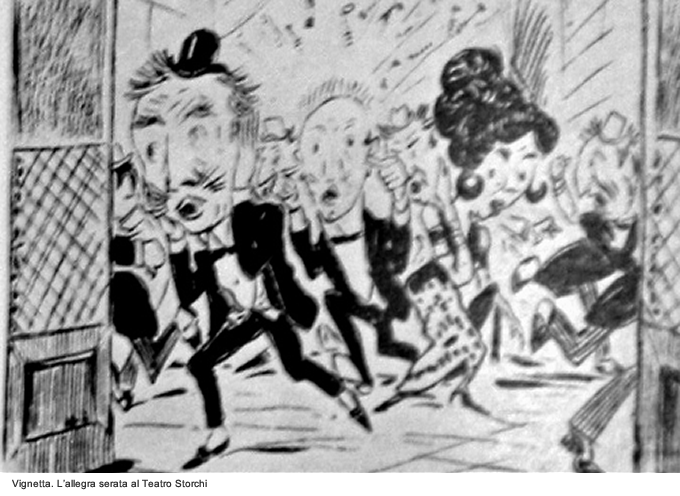 Among the constant interruptions from the audience, Filippo Tommaso Marinetti introduced the new instrument and promised that “… it’ll give you pleasant feelings.” After listing the noises that inspired its construction, Luigi Russolo and his collaborator and friend Ugo Piatti, brought on stage the awaited Scoppiatore: “… The appearance of the famous Scoppiatore was greeted by violent shouts and Homeric laughter. Some screamed “to the asylum!”

… Among the most lively and noisy laughter, incessant and vigorous interruptions, the public cried out: “There is a trick, there’s a trick! Open the box! You are imitators, you are traditionalists! You want us to appreciate an imitation, while we can easily enjoy the original!” Russolo and Piatti tried the tool twice… The audience laughed loudly and Marinetti, losing his patience, shouted: “You have the sceptical attitude of farmers in front of … ” But he couldn’t go on, the pandemonium was at its top” (Op. Cit Maffina.. p. 29.) [2].

While Russolo started the machine, screams and whistles, and some applause too, filled the room. The noise coming from the crowd was so loud that it covered the noise made by the Intonarumori. The Futurists were forced to end the evening. “I perfectly knew – Marinetti shouted at the audience while people were leaving – that donkeys wanted the monopoly of noise!”

Russolo began designing the Intonarumori after writing an important letter-manifesto L’Arte dei Rumori (Mar. 11, 1913) addressed to the Futurist musician F. Balilla Pratella. The manifesto says: “In ancient life it was all silence. Due to the invention of machines, in nineteenth century Noise was born. Today, noise reigns supreme upon the sensitivity of men. ” (Russolo., L’Arte dei Rumori in Maffina. Op Cit. P. 129) [3]. 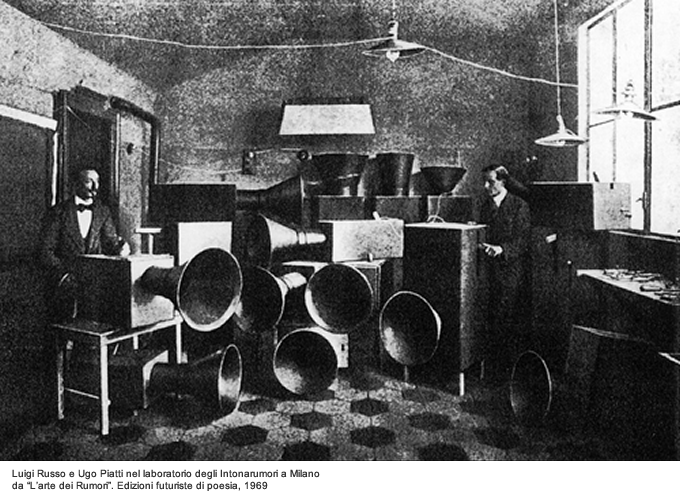 Luigi Russolo claims that the musical evolution is moving towards the attempt of combining dissonant sounds together, research that will lead to the identification of the sound-noise. The text analyzes the difference between sound and noise and identifies the nature of the continuity of the sound, which is less fragmented and irregular than the noise. It is important to work on the differences between noise and sound. “… ‘We must break out of this limited circle of sounds and conquer the infinite variety of noise-sound“.

Russolo explains that in order to produce a sound it is necessary to make a body to vibrate regularly at a pace that our auditory nerve will perceive as a sensation of vibration in series, that mix together to shape a continuous musical sound: “… if I manage to reproduce a noise at this speed, I’ll get a sound made out of a combination of several noises, or rather a noise which repetition in series will be sufficiently quick to give a sound-like impression of continuity.

The difference of timbre is analyzed through the definition of the overtones. Every body that vibrates, he says, besides its keynote which provides the longest vibration, is divided into other parts that follow the vibrations of the whole but with different wavelength. We can therefore form nodes and antinodes. The diversity of their composition will determine secondary vibrations able to modify the timbre of the keynote.

“In producing noise – Russolo says – the strength and the irregularity with which a body is placed in vibration leads to a vast harmonic sounds production.” As an example: if you dip a stick in calm water it produces a series of waves that, starting from the stick itself, spread and regularly widen. When the water is rough it’ll produce other waves that overlap at the beginning but that break, multiply and expand around the point of agitation.

” The real and fundamental difference between sound and noise can be reduced to this alone: noise is generally much richer in harmonics than sound… But, since these harmonic sounds always accompany a pre-dominant fundamental tone, every noise has a pitch”(Russolo, L’arte dei rumori in Maffina. Op Cit. P. 143). [4] 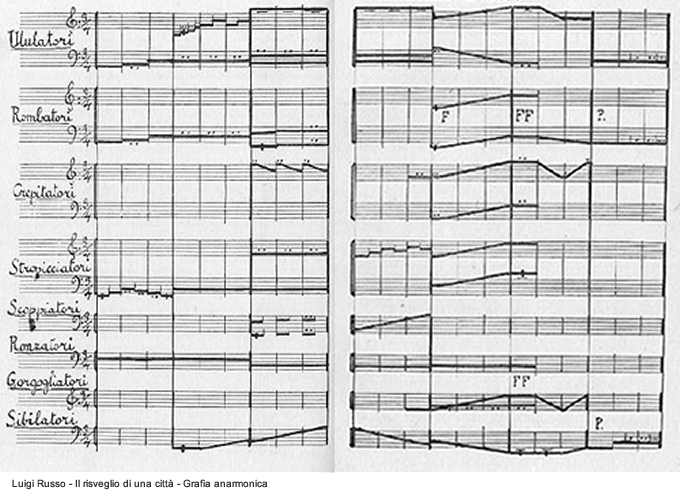 Mechanically, through the voltage change of a diaphragm, Luigi Russolo makes the variations of tone and semitone, it is to say the enharmonic steps that we find in the sounds of nature, possible. “However, if enharmonic sounds exist in nature, or better if in nature the sound-noise exists only in these sounds, and if these sounds are easily perceived by the ear, why not to use them in music?” (Russolo in Maffina. Op Cit. p. 60.) [5]

As the classic writing system does not consider the subdivisions of the semitone, the problem is now how to write an enharmonic melody. To identify the enharmonic transition between a tone and another Russolo invented the line-note, which is appropriate for tracking dynamic continuity and he sees as the essence of enharmony.

The months after the output of the manifesto, Russolo, with the assistance of his friend, the painter Ugo Piatti, began to build the first Intonarumori. The first Intonarumori, the scoppiatore, built in an environment of strong creative enthusiasm, will be shown during the evening in program at the Teatro Storchi in Modena. “This first tool – says Russolo – reproduced the characteristic noise of the spark-ignition engine and could change the tone of this noise up to a maximum of two octaves. There was shared enthusiasm: “This was because everyone was able to observe the changes in tone present in such particular noise like the one of the spark-ignition engine.”

In the attempt to collect the variety of possibilities of noises that life presents, Russolo thinks of 6 families of noises: 1 – Roars, Thunderings, Explosions, Hissing roars, Bangs, Booms. 2 – Whistling, Hissing, Puffing 3 – Whispers, Murmurs, Mumbling, Muttering, Gurgling. 4 – Screeching, Creaking, Rustling, Buzzing. 5 – Crackling, Scraping. 5 – Noises obtained by beating on metals, woods, skins, stones, pottery. 6 – Voices of animals and people, Shouts, Screams, Shrieks, Wails, Hoots, Howls, Death rattles, Sobs. In this list we have enclosed one of the most peculiar among fundamental noises; the others are no more than a combination of these noises. (Op. Cit. P. 133). [6] 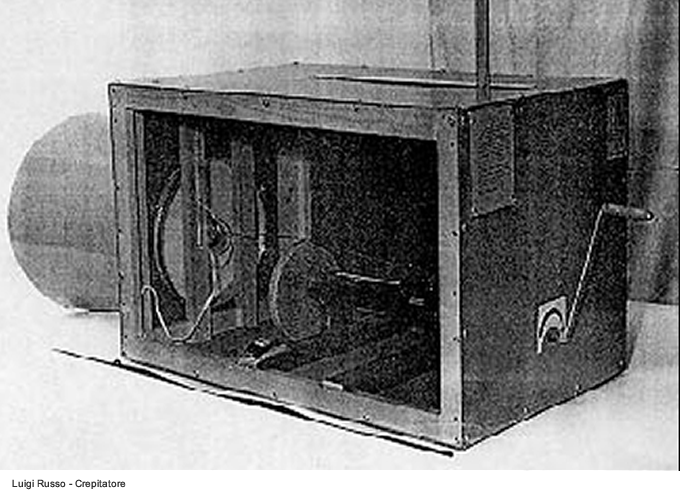 The first 21 Intonarumori are howling, thunder, crackling, crumpling, exploding, gurgling, buzzing and hissing. The Intonarumori described by him is a rectangular base box, with a trumpet on the front and a crank on the back. The crank serves to start the movement that leads to the production of noisy excitement. Depending on the speed at which it is operated, it modifies the intensity of sound, giving piano and forte. On the top there is a lever that moves on a graduated scale and has the function to vary in tone, semitone and tone. By moving it, we increase the tension of the harmonic strings which at the same time is shortened by a bridge. The most tensioned is the rope the highest is the sound.

The Intonarumori can be played by gripping the handle with the left hand and by turning the crank with the right, or by pressing a button for those that are turned on electrically.

Russolo then lists the sound effects of his machine: “The Crepitatori produce a metal crackle that has no comparison. They are extremely intense and have a perfect and easy intonation and a timbre rich of harmonic high sounds. They offer tremendous resources, changes in intensity, especially in the treble, which can give a sort of high grunt like a skinned animal, or an Argentinean, gentle, adjustable, clear, detached tinkle. The sharp crackle is perfect for solos and it’s probably an instrument able to produce virtuosity. The lows give the effect of iron scraps agitated rapidly and confusedly or moved with crackling clarity and aridity”(Op. Cit. P. 169). [7] 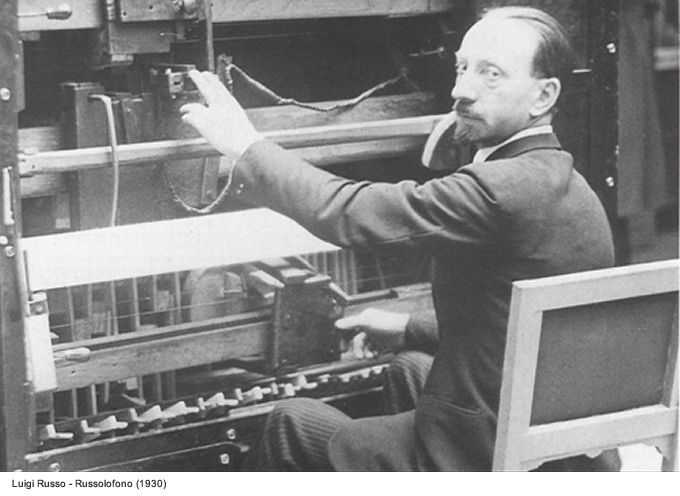 “The Russolo experiments,” says Murray Schafer in his book The Soundscape “represent a crucial step in the history of acoustic perception, a reversal of the roles of figure and background” (Schafer, R. Murray., The Soundscape, Milan, and . Ricordi, 1985). [8]

Usually we pay more attention to the part of the sounds that emerges from an audio, diverse and confused background. We are surrounded by a blurred magma of noises. Immersed in this total confusion we tend to listen to sounds which are diverse in timbre and meaning. If for example we travel on public transports in a chaotic city like Milan, the volume of noise coming from the traffic and the bus itself is extremely high. We tend to isolate ourselves from this confused background by listening to our neighbour talking on the phone or by listening to music.

Let’s then pay attention to something more complex and confusing. Let us define in our listening one single sound, (the squeak of rubber of doors that open and close) and move the attention from its background function to its function as a figure. We’ll see that the sound is full of unusual rhythmic and tonal qualities that stimulate us equally. Out of its normal context, it appears in its new beauty. It is exactly the beauty of a new possible play that Russolo talks about.

This attention to the sound material and to its use makes Russolo so in line with the evolution of the music language that his manifesto The Art of noises is quoted by John Cage as one of the texts at the base of the creation of music. Also the composer Edgar Varèse (1883-1965) becomes aware of Russolo’s instruments and the difficulty to work with its sounds.

By listening Ionisation (1929-31), his perhaps closest work to Russolo experiences, we notice a high component of noise. On occasion there is a fire emergency or air strikes siren that overruns the sound space. The variety of the percussions timbres blends with it and creates a general feeling of disorientation. “(…): For the first time the listener faces a new universe of space and sound, made of noises and instruments that produce an unclear sound. The traditional line between sound and noise is shot down, replaced by an extremely new conception of the sound material. 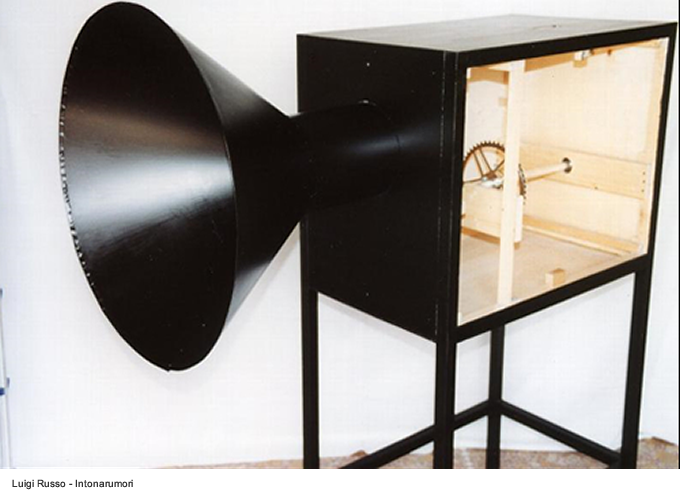 Russolo enacts a reversal, changes our perspective of listening. By translating noise into music he warns us “First make the senses vibrating and your brain will also vibrate! Make the senses vibrating through the unexpected, the mysterious, the unknown and you’ll have the true, deep and intense emotion of the soul ” (Russolo in Maffina. Op. Cit. p. 175.) [9]