Shoot Me From Linz To Venice. “videoludica” And The Italian Game Art 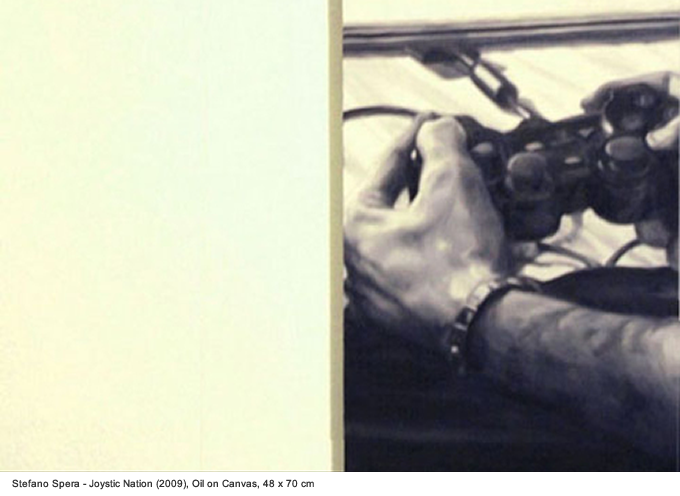 Game Art, i.e. contemporary art inspired by videogames. It could be an artistic modification of an existing commercial videogame or a completely new artistic game (an “Artgame”), but it can also be a more traditional art forms like painting, photography, video or performance. Common for Game Art is that the aesthetic, the technique and culture from the videogame world has been essential when the art work was created or exhibited to the public.

The first known example of a Game Art work was presented at the Ars Electronica in Linz, Austria in 1995. The Artist Orhan Kipcak created an artistic modification of the well known First Person Shooter videogame Doom, which he called Arsdoom. Arsdoom was a complete new level for Doom, a reconstruction of the Brucknerhaus exhibition where the player could visit the virtual exhibition, fight against the artists, destroy the exhibited art or, by using tools found in the building, create his own art. 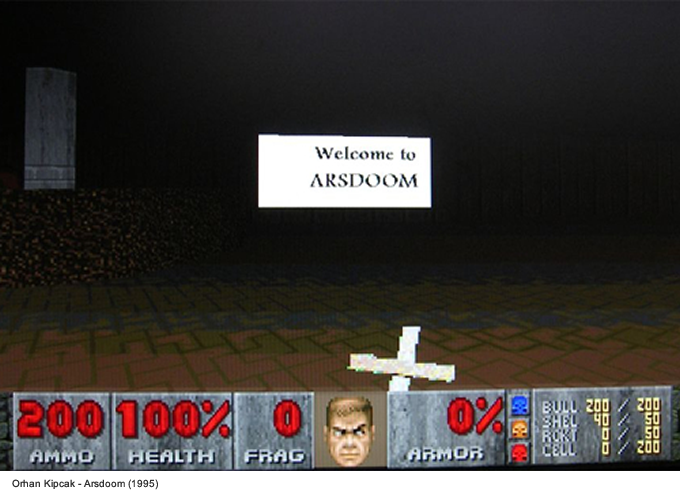 This early artistic experiments with videogames were at the time not so different from hacks and mods made by players around the world. The genre “First Person Shooter” had literally exploded with Doom and, as with Doom, these new games were often shipped with simple tools to create new levels, characters and environment to the games. When Anne-Marie Schleiner curated the exhibition Cracking the Maze: Game Plug-ins and Patches as Hacker Art in 1999 it included not only artists but also regular players who had hacked and modified videogames. One year earlier Konrad Becker had launched the exhibition Synreal: The Unreal Modification at Institut für Neue Kulturtechnologien in Wien.

Synreal was an exhibition based on modifications of the popular Unreal games. Unreal became a very popular videogame for artists due to its graphic engine that was very easy to modify with the help of several tools. The close connection between artistic modifications and regular player’s modification is probably one explanation for why this new art form didn’t make it on the international art scene in the beginning. At the time there was still big scepticism towards videogames as culture. In media, videogames were described as new mass entertainment filled with violence, gore and blood, unhealthy and dangerous for youths. The idea that it could be used to create art was far away.

It’s in 2002 that we can start talking about an international breakthrough for Game Art on the international art scene. It was the Chinese new media artist Feng Mengbo that at Documenta 11 presented his work Q4U, a modification of the game Quake. Next step in the process of recognition in the art world for Game Art would be the Whitney Biennal 2004 were we can find two works of Game Art included in the biennale. The first was by “The Velvet strike team” (Anne-Marie Schleiner, Joan Leandre, Brody Condon) who made designed a graffiti add-on to Counterstrike, which made it possible to spray anti-war message in war game. The other contribution to the biennale was what nowadays is a classic work. The Super Mario Cloud by Cory Arcangel, a hacked NES cartridge where the artist removed every graphic object except the scrolling white clouds. 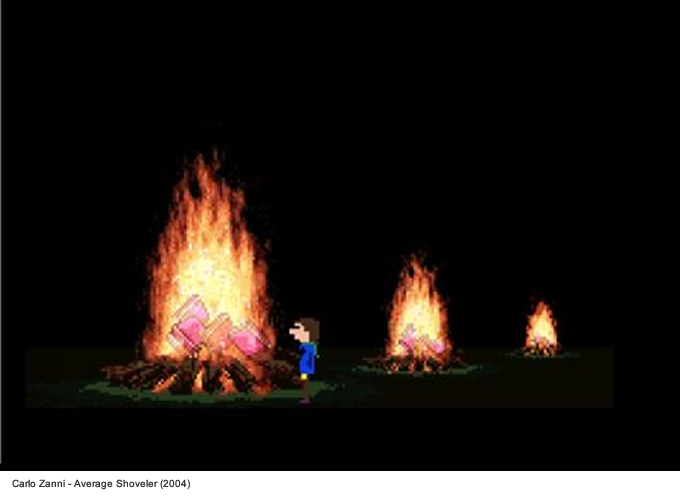 After 2005 the numbers of exhibitions with Game Art increases and the interest for videogames and art takes its expression in several books, articles and seminars. At the time the artist mostly abandoned the modification phase and started to explore and mix videogames with other art forms like performance, installation, video (or as it is called in the gamescene: machinima), paintings, sculpture and so on.

In 2007-2008 LABoral Art and Industrial Creation Centre, in Gijon, Spain, presented an ambitious project. A trilogy of exhibitions called GameWorld, Playware and Homo Ludens Ludens that focused on expressions of play in contemporary culture including videogames and art. Over all these exhibitions made an important summery of the development of Game Art until 2008 and showed that videogames were now taken serious by the art world.

Over the last years we have seen a growing interest from institutions and museums for videogames as art. In March next year, for example, The Smithsonian Art Museum in Washington D.C will open an exhibition called The Art of Videogame, which is described as: “The Art of Video Gamesè is the first exhibition to explore the forty-year evolution of video games as an artistic medium, with a focus on striking visual effects and the creative use of new technologies.

But before that videogames will invade and conquer the 54th Biennale di Venezia with the exhibition “Neoludica: Art is a game 2011-1966” with Deborah Ferrari as main curator. The Neoludica includes six different exhibitions with 34 artists, many well known for the Game Art audience as Tale of Tales, Miltos Manetas, Eva & Franco Mattes and Molleindustria.

A person that closely has followed the development of videogames and art is Matteo Bittanti, Assistant Professor in the Visual Studies Program at the California College of the Arts in San Francisco and Oakland. DigiMag got an interview with Matteo Bittanti who together with Domenico Quaranta is curating the exhibition “Italians do it better: Game Art Made in Italy” as a part of Neoludica (echoing the exhibition/screening with exactly the same title – Italians do it better – curated in 2005 by Marco Mancuso for Digicult at Optronica festival in London, that focused on Italian artists who had done the history of audiovisual art in the last ten years in ITaly – http://www.marcomancuso.net/?p=62) 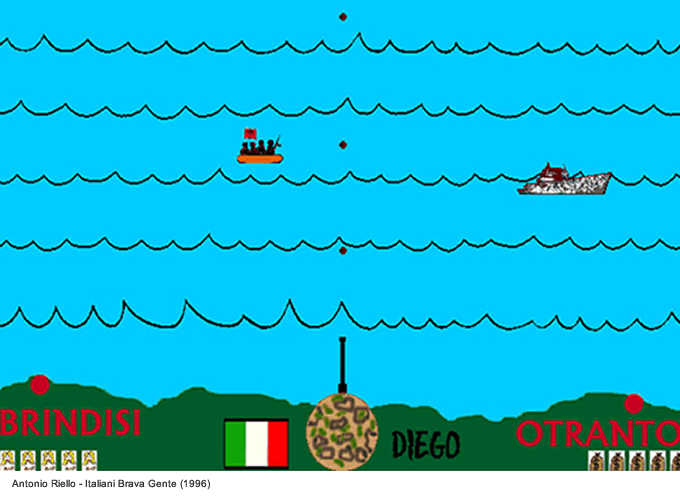 Mathias Jansson: Matteo, what does the Italians do better?

Matteo Bittanti: Italians do it better!!is an alternative Italian Pavilion. It’s an irreverent and slightly subversive retrospective celebrating the work of several artists who have been experimenting and exploiting game-based technologies for more than two decades. Specifically organized for the first edition of Neoludica – Art is a game – at the 2011 Venice Biennial. Italians do it better!! pays homage to Italian videogame-based art interventions. Hopefully, visitors will get a chance to see the past, present and, God forbid, the future of indigenous game-based art, in analog and digital form, on canvas and on screen. This is seriously playful art.

No shit! And what is Neoludica then, you ask. Basically, it is a larger event that celebrates the multifaceted connection between art and videogames – a huge box containing everything from Game Art, game art, Indie Gaming, Art games, and Chinese fortune cookies. This year (i.e., 2011) Italy is celebrating its 150th anniversary. Domenico and I came up with the idea of combining this event with Neoludica. A killer combo. But since our relationship to Italy is somehow, er, complex, (where “our” = several artists, myself etc.) we thought about coming up with a title that was both celebratory and sarcastic, festive and critical. The kind of title that gets you in trouble. After all, we’re troublemakers.

Mathias Jansson: The subtitle to the Neoludica event is a quote from Duchamp “The Art is a game”. Why are there so often references to Duchamp and Johan Huizingas book Homo Ludens (the playing man) when you talk about videogames and art? What’s wrong with contemporary theorists?

Matteo Bittanti: I’m not sure about contemporary theorists explaining new media. I find most contemporary theory explaining new media utterly boring, to be honest. And I have not read a book since 1978, when I discovered Space Invaders. I’m shallow and distracted. I prefer contemporary scholars who use new media in creative ways. One example, among the many, is Harvard’s newly founded metaLAB. Neoludica‘s tagline is a reminder that art is a very playful game that we have been instructed to take very seriously. Too seriously. Luckily, spoilsports and enfant terribles like Ben Lewis or Sarah Thornton are providing much needed playful criticism. 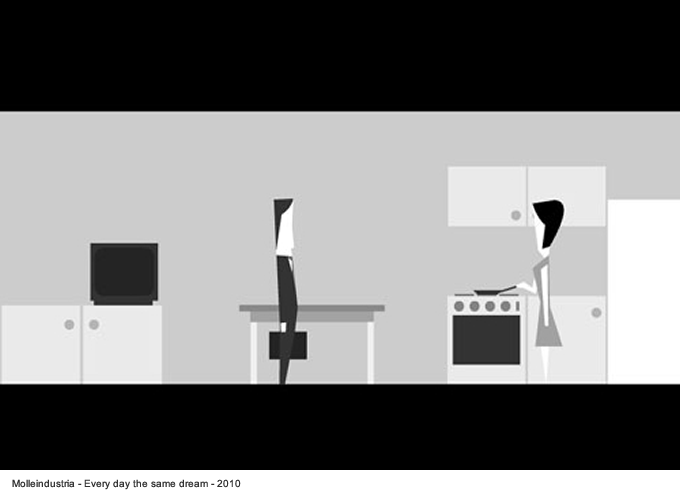 Mathias Jansson: Except the Italian artist that was chosen for the exhibition, which artists would you say are the most interesting in the field of Game Art today?