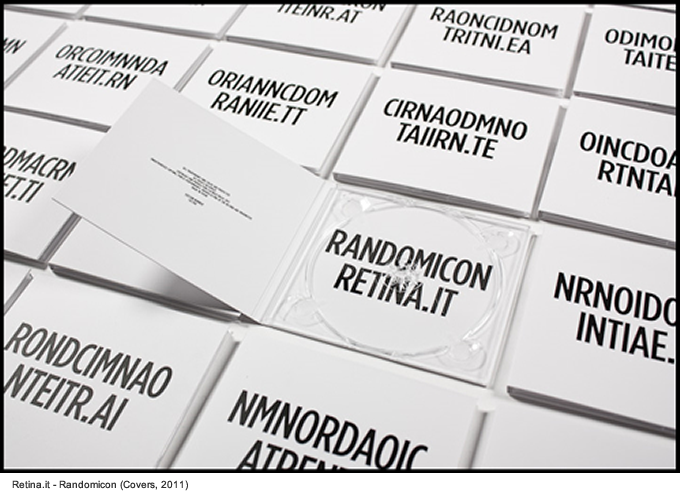 After three years from the previous release Semeion on Hefty, the Neapolitan duo Retina.it formed by Lino Monaco and Nicola Buono, who are together since the beginning of the 90s, is back with a new album Randomicon on FlatMate / Störung Records.

Randocomicon is the result of the great research on modular synths, the majority of which are created by Nicola Bruno, and it is conceived as a tribute to the random which determined the universe origins, a moment of seminal insight generating chaos. Sound chaos which the Retina.it are able to control through a timber and combinatorial logic which during the years became their trademark.

The cd, developed by AP_AA designers, is printed in a limited edition of 500 copies, each one of which has a different anagram on the cover resulting from the letters extracted from the lyrics and the name Retina.it. Of this articulated and stimulating music project, looking at the past and at the future at the same time, we talk about it with Lino and Nicola: after a few years from the first meeting with Digicult, we take the chance to evaluate the progress of their present production, after years of activity at a national and international level. 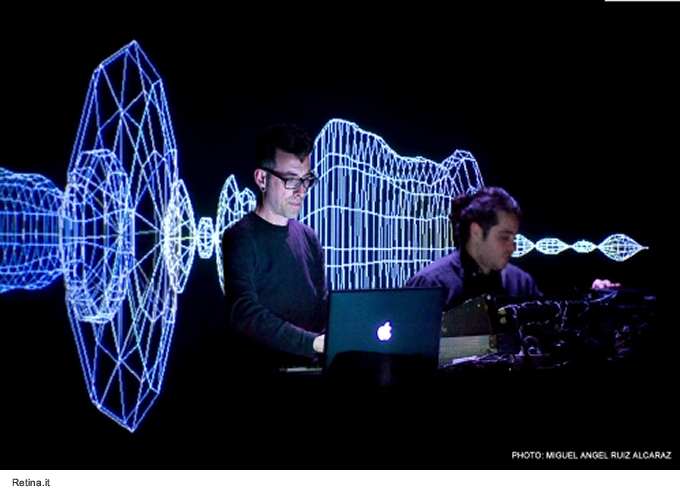 Pasquale Napoletano: You work all over the world but you have solid roots in Naples, even in a period of time when living in it is not easy, for sure. In my opinion it is this visceral roots which allowed you to get unharmed through the cultural trend of “Naples power” of the previous years and that turned out to be completely ephemeral. You instead have always been out of the sensationalisms. What does it mean for you to live and create in a place like this one?

Retina.it: What is “Naples power” We do not know anything about that. We try to look past out perimeter walls since we are really motivated to look for something new. We are ostinat and stubborn, even too much at times. We filter everyday trying to take only what stimulates us in such a tormented place like the one we live in, where you can feel the energy and it is really strong..

Pasquale Napoletano: In your new record Randomicon, it seems to me that a particularly dark electronic vein emerges, something which has always been there but that now comes out without any conditioning. What is there behind this sound?

Retina.it: There is the fact that we spent most of our life listening to minor chords. The negative conditioning which this society tries to inexorably overcome. A lot of anger for the blindness of institutions keeping on with the realization of a project made of subjection and political patronage. 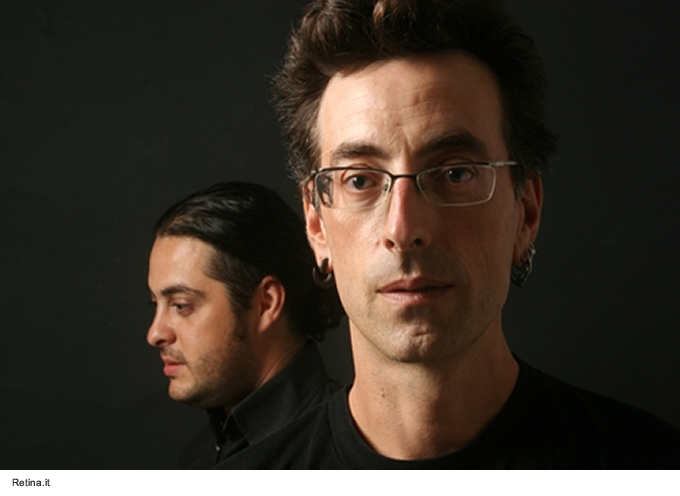 Pasquale Napoletano: Electronic music, meant as a genre, probably run out of its pioneering component to become a language, a way to communicate in a sometimes direct and visceral way. What does playing electronic music mean, today?

Retina.it: Playing electronic music today is like playing rock in the 70s. Living the revival aside, any era is characterized by a sound. In the past, in any house it was easy to find a musical instrument, even if it was not played. Now you at least find a computer and with the easiness of accessing information, and that’s it. Any boy wo has enough curiosity is able to understand the way to use the medium for a creative process like music.

Pasquale Napoletano: Always talking about the new record, how does Randomicon come to life, a tribute, as it is written on the cover notes, to the random concept? And how will it be live, since that is a very important aspect in your expressive universe?

Retina.it: There is an analogical synth module by Buchla called Source of Uncertainty. You give it an imput an it gives you back outputs which differ from the original one and that happens random. Nicola rebuilt a similar but smaller project: this small instrument reflects completely who we are. Like an explosion of a supernova generating new worlds, we try to explode to create small microcosms made of sound, in a completely random way.

For the presentation of the live performance we have some principles to start from, but I assure you that from time to time, even if the tracks are recognizable and have certain characteristics, they assume different forms and shades. Everything depends on many factors characterizing any live event, starting from the sound system to come to the audience. 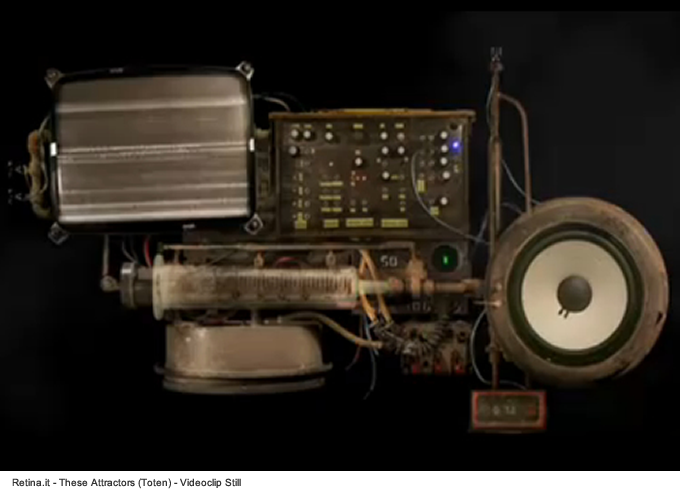 Pasquale Napoletano: I’ve always been interested in your work on processes, meaning coming to a solid and structured sound through unconventional procedures. Did you experiment new processes this time too? And speaking of that, did the relationship with the FlatMate label and the production by Alex Gamex influence your way of working?

Retina.it: Sometimes you have new processes when new instruments on which to start investigating are added to the set up, being them hardware or software. Since a few years, precisely after the travel to Chicago in the studio of John Hughes of Hefty, where we realized our yeat unrelease album which we deeply care about, we found ourselves in front of a huge modular synth.

From “buchla” to “sinth”, from “doepfer” to “wiard”, going through “tb 303” stricktly modified “Devil fish”, to a “fenix” built in few exemplars, all perfectly “patchable” among them. We really wanted to travel, without spending a lot of money, to the world of modular analogical synthesis. With all due proportions, we are customizing a modular “synth”, on one hand buying some modules by Doepefer, Cweijman, Harvestman and on the other hand building them. Nicola, who is the mind and the arm, has just ultimated sixty modules, clones of Moog, Arp, Paia, some of which have just been tested during the production of Randomicon. Right now, he is up against a VCO “ASM” and a VCF “EMS”.

All things considered, this new entry retraces almost the same path we were used to pass through, when we were creating sounds. We have always used the studio as if it was an only modular synth. We were making sound go through Korg, Yahama, Doepfer which do not have an audio input to used them as filters. From then we went through multi effects and modulators. So, we could define this process as similar to the one of the creation of a sound on a modular system.

As far as our relationship with Flatmat is concerned, it is all very easy. We know Alex Gamez personally and he is a very quiet person. It is thanks to him that we got in contact with the designers studio AP-AA, who developed the concept of our album cover, which is different for all the 500 copies, as you will know. 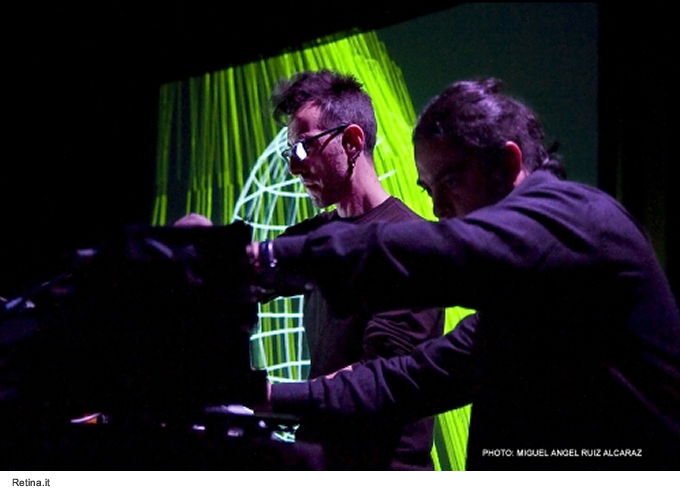 Pasquale Napoletano: Together with the tracks you always have a solid video performative corollary able to build with sound an in inextricable relationship, so much so that you cannot perceive the sound separated from the images and viceversa. Did this happen also for this work?

Retina.it: In our live performances, we used slides. Not simple slides, but small microcosms in which we put oils, colors, dusts etc. With the heat of the lamp the liquid substances started moving creating images at times kaleidoscopic and with an almost hippy taste. Then, we worked with friends who worked as vjs and they helped us during the live performance. Recently, a bit tired of these sporadic collaborations, we decided to experiment on our own this side of live performances, as well.

But we were not sure about what software to use. We asked Claudio Sinatti for some advice and he suggested to use Quartz Composer, a modular software using a visual programming language similar to Ableton and Logic. Obviously we are just starting and the results do not always satisfy us, we are still learning and we want to participate to a good workshop sooner or later, even if right now we do not feel the need to, thanks to the great online comunities, among which Kineme, dealing with software.

Pasquale Napoletano: Looking at your career from a more general point of view and thinking about the attention you showed for masters of the past like Shaeffer and Gesualdo, in the works presented at Flussi 2009 and Sentieri Barocchi, together with the Conservatorio of Avellino between 2009 and 2010, who are the artists you artistically grow up with? And, more recently, were there artists, obviously not necessarily linked to electronic music, who impressed you in a particular way?

Retina.it: Many, very many. Let’s try giving some coordinates: from Spk to Nitzer Ebb, passing through Auterchre, coming to today with Anbb. All of what is in the middle represents our musical background. Developing a new interest for videos, we discovered some interesting and innovative artists: Candas Sisma which with her new video Flux inspired us in the production of the video of Randomicon, Quayola, with his work presented at Earthquake of Avellino in December 2010. Speaking of music, we really enjoyed Senking, but also Scorn and our friends Matter who we are fans of since forever. Without forgetting the reprints of classic new wave albums: Sound from the lion mouth and Half machine lip mores, strictly in vinil. 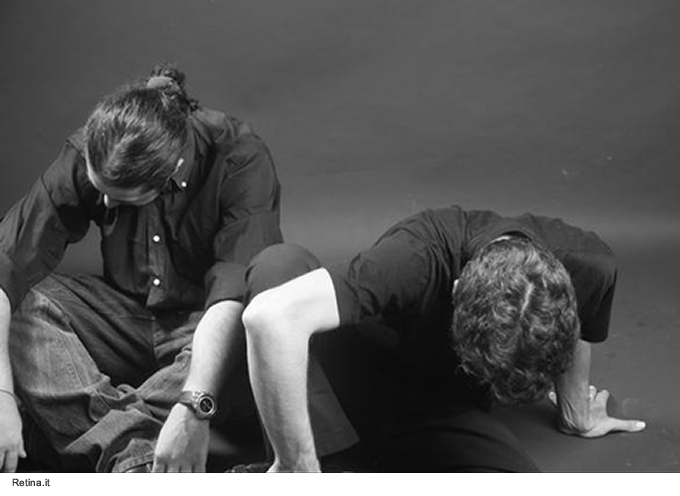 Pasquale Napoletano: Even if with the most enigmatic sounds it is very easy, listening to your records or your live-sets, you sometimes sway in the rythms of dance. To make a long story short, a Cartesian question: dance-hall yes, or dance-hall no

Retina.it: Swinging on XYZ is not a bad thing at all. Let’s say yes to dances, but with moderation.