Byob. Bring Your Own Beamer 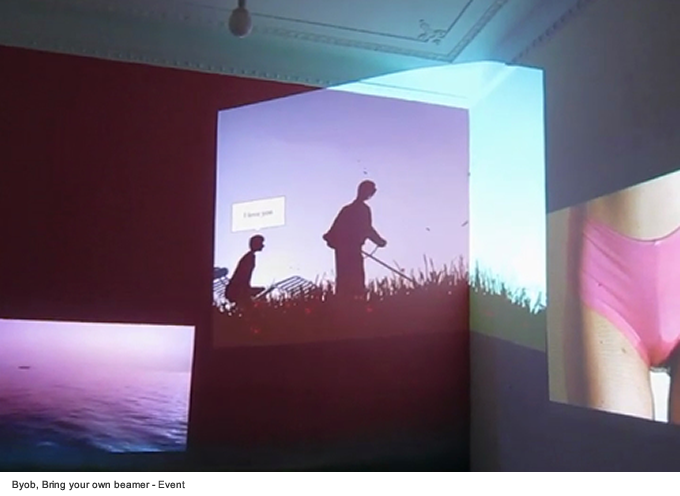 The well-known abbreviation BYOB might suggest Bring Your Own Beers. However, even if the spirit of the event I am about to explain reminds the one of a house party with friends where the host sets up the house and the guests bring the drinks, BYOB means something else.

In our case BYOB means Bring Your Own Beamer. It is a new format of itinerant exhibition in which space is transformed for one day in a digital version of a nineteenth-century picture gallery. By using a projector local artists are invited to show everything that could fall within the definition of image motion: from a Skype video call to a photoshop screen to a performance with Finder.

The idea behind this project is simple. BYOB was born and keeps growing as a space of free artistic expression. Creating a BYOB is also easy: the only things you need to do is look for a place, invite the artists you like, ask then to bring a projector and let everyone experience the endless possibilities that this exhibition format has to offer. It was the DIY typical freshness that inspired the project. Designed by Rafael Rozendaal less than a year ago, BYOB is now well-known in the entire world. After the Kunsthalle in Athens, The Irish Museum of Contemporary Art in Dublin and the Hyde Park Art Center in Chicago, on June 2nd it will be shown at the Venice Biennale. 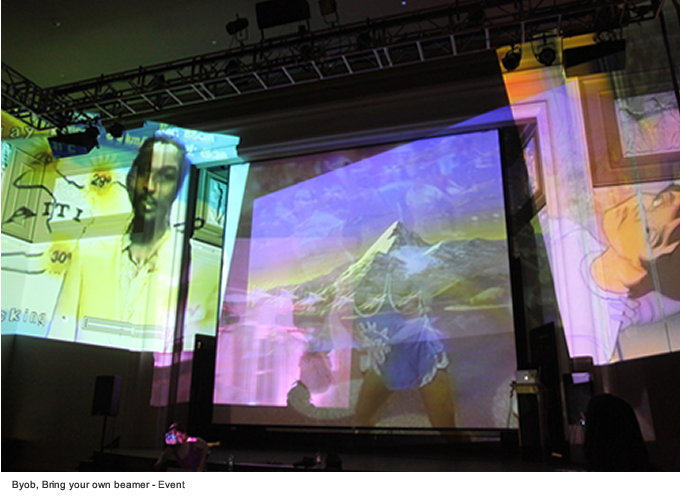 BYOB starts from a global need to create new spaces of expression for artists that work with video or moving pictures, and it coincides with the will to propose an “open model” outside the net.

It is part of a wider trend that combines the Post-Internet artists’ research, which explores the possibilities of breaking the separation between the real and the virtual world. The aim is to create entertaining and creative intersections. There is a duality in the way this artistic movement works which mirrors the duality of our lives, in which the influence of the Net has become day by day more important and representative of a parallel life. BYOB comes as a space that could be positioned between these two worlds, a sort of limbo between the Net and the real life.

Rafaël Rozendaal, is a popular Dutch net artist, famous for his interactive works in which he transforms daily life objects, common situations, landscapes and emotions in flash applications. When he was living in Berlin he became aware of how difficult it was to organize a collective exhibition, while the process itself is extremely simple if you consider that all his friends worked with video and had a projector at home. 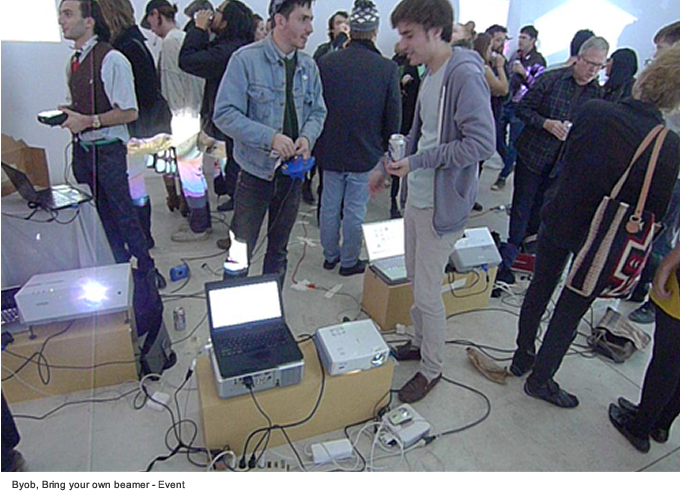 BYOB first edition was held at the Bureau Friederich Projectstudio in Berlin, and was organized and curated by Rozendaal and Anne de Vries.Rafaël immediately understood that the format could be repeated in open style. “I realized that we could redo it in different places, without any limitation for what concerns the curatorial part and the choice of the place itself” said Rafael.

BYOB gives a lot of opportunities to a generation of artists that grew up behind the screen. It presents itself as an open and dynamic structure that not only allows spontaneity and experimentation, but gives to the artist the responsibility of taking care of the exhibition’s organization and procedures. According to its manifesto, a moving picture is never a still object, especially when the artist has the opportunity to act and the images to emerge from the screen and invade the physical space.

The artist faces a new situation. He is invited to take advantage of every screening room’s wall and to seek new opportunities of interaction with the public. The choice of the place is therefore fundamental. To allow the screenings to overlap, mix, and produce something more than a simple sum of videos a single room studio is probably the best choice. It is essential to let the videos flowing through time and space. In this way they can reflect the nature of the Net, its chaos and its morphology in constant evolution. 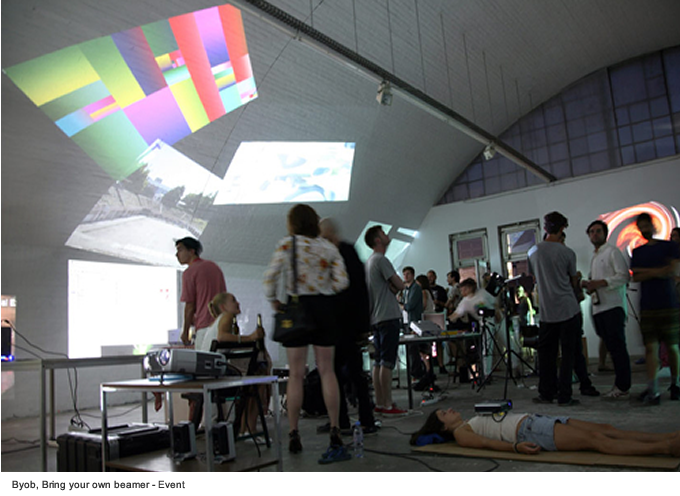 BYOB’saim is to show, through shape and contents, the free and changeable nature of the Net. At the same time it reminds us our condition of human beings. Even though we can use the Net to spread video contents or draw conclusions about the current situation of videoart, looking for a projector is still a fun thing to do like bringing beers to a party.