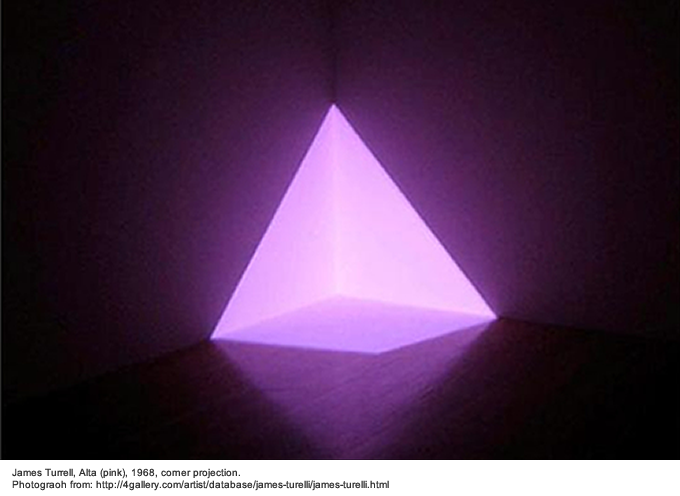 This essay offers an investigation into the notion of interstitial space and its creative exploration in various site-specific art practices as realised mainly with the use of digital technology. This is the second part of this three-part essay.

In the site-specific art of the seventies, artists challenged the use of gallery space, its functional and institutional character, mainly through modifying the built boundaries of the site. As Miwon Kwon observes, “the physical condition of [an]… exhibition space remains the primary point of departure…”. [1]

Certain artists expanded their interventions into other kinds of sites, as for instance, Gordon-Matta Clark‘s work. The artist literally cut through abandoned buildings. A characteristic case of exterior and interior space subversion can be seen in Michael Asher‘s Untitled Installation (1970). Through his architectural intervention, Asher turned the usual rectangular shape of gallery space into an hourglass, distorting thus, the airflow, sound, and light, while drastically altering visitors’ access to the space[2] 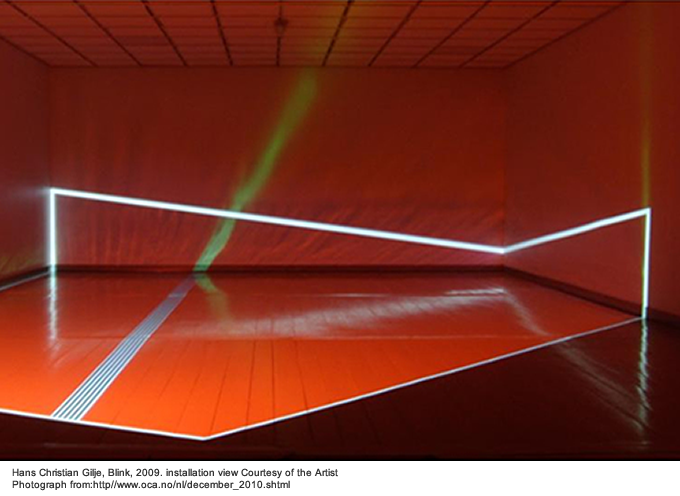 Early types of site-specific art are realised through a kind of enigmatic oscillating reversal between materiality and immateriality, reality and illusion, James Turrell‘s work consitutes a representative case of in-situ intervention where light and space play a dominant role. The artist uses a combination of natural and artificial light sources through a simple mechanism of computer-controlled sensors. The apparatus is hidden from spectators. [3]

In Turrell‘s works, spectators witness unsettling reversals in how they visually perceive space. Light appears to be as palpable as an object, while the built space appears to dissolve, creating a sense of a changing distortion of dimension and depth. In works like Alta (pink) (1968), our perception of light ‘oscillates’ between a sense of 2D triangular light formation casted onto a corner, a triangular 3D light box, a 3D object as seen in a Virtual Environment, or even a higher dimension solid, depending on what distance and angle Alta is viewed.

As Turrell puts it, light is “not exactly illusion” and “although light exhibits wave phenomena, nevertheless it is a thing – it is optical material”. [4]. Consequently, Turrell uses the ambivalent nature of light itself, as the suitable medium for a kind of “space-making”. This space-making is realised through ‘involving and activating’ an interstitial space in our visual perception of physical reality that Turrell identifies as follows: “The art that I make covers this ground between form and actually forming space using Light working the space in between so that it limits or expands the penetration of vision light is the content and the form”. [5]

In certain more ‘environmental’ artworks like Rayzor (1968), the artist physically intervenes into the site by constructing a partition wall in front of the windows and using natural and fluorescent light so that, as Craig Adcock describes: “…rather than the light “constructing” the space, the actual architecture of the room was modified to hold the light… the separations between the perceptually dissociated and the mentally instantiated elements of the usual experience are blurred”. [6]

In fact, there is a mutual interaction between space and light in such artworks. The actualities of built architecture tend to be either, modified or obscured by the dominance of the subtle ambient space that alters our perception of reality. The fleeting and ever-changing nature of time and light is fore-grounded. 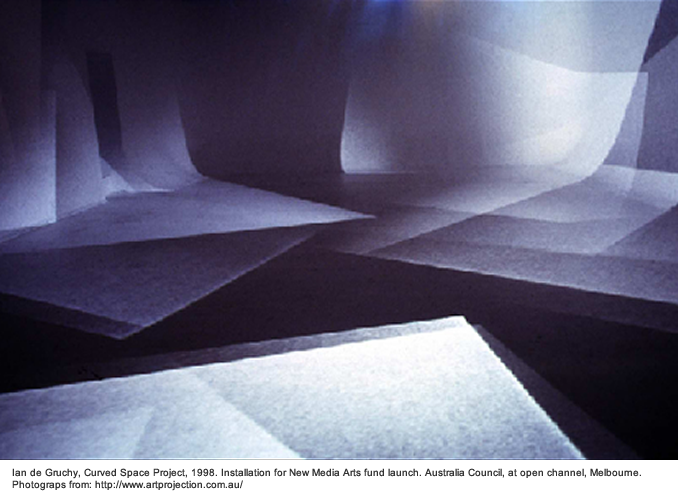 In HC Gilje’s Blink (2009),we experience a different type of interstitiality through the use of in-situ projections of abstract digital visualisations. Having its roots in Expanded Cinema, such kind of audiovisual artwork is realised through projecting animated digital visualisation onto the walls and floor of the gallery space. In this way, the computer screen and its depth of field are ‘opened up’ into room-sized “abstract light paintings”, as defined by the artist, which emerge through a complementarity between projection and reflection. These spatial “paintings” challenge our sense of the depth of vision through visual perspectival interplays. [7]

As Mitchell Whitelaw characteristically explains: “…data flows become experienced events – sounds and images – which in turn inform new data flows, and so on”. Consequently, the work operates between the “functional illusion  generality -“, and immateriality of digital technology, and the specificity and materiality of the actual site, so that an “implicit inter-space” emerges. [8]

A more engulfing and unsettling experience of expanded visual space is presented in Ian deGruchy’s artworks that have their roots mainly in theatre performance and ambient environments. Digital projections are carefully mapped onto the surfaces of the gallery space. The projected digital folds, ‘vortices’ and the interplays of overlapping curved planes cause a highly disorienting non-Euclidean space to appear. In this way, the borderlines between figure and ground, object and subject are blurred as, for instance, in Curved Space Project (1998).

Suzie Attiwill describes, a “third condition”, which is also defined as a “middle space”, emerges because “essential form becomes continuous form as matter extends beyond the frame” through the manipulation of light, shadow and the visual extension of architectural characteristics. At certain times, the site appears to ‘melt’ and become very light and immaterial. As Attiwill explains, “the difference between representation and presentation is a critical one in the apprehension of continuous form or extension”.i Indeed, instead of representing space, such artworks are ‘made’ by space; the interstitiality of such an expanded and excessive space is “at work”. 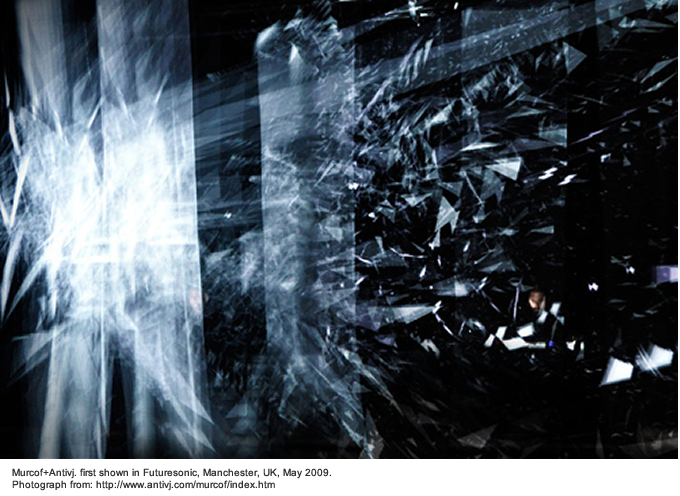 In the audiovisual installations by the European label AntiVJ, interstitial space is presented as a series of dynamic immaterial ‘ruptures’. Large-scale installations such as Murcof+AntiVJ (2009) and 3Destruct (2007) visually break the confines of built architecture and autonomous spatial ‘folds’, through the projection of light onto invisible semi-transparent screens arranged in space. In this way, instead of being limited to the perimeter of the built space, the space between the built surfaces of architecture is utilised. As spectators walk through 3Destruct, they become disoriented in such a “non-linear universe”, the form of which, oscillates rapidly between weightless planar layerings and linear mazes of changing colour, opacity and density.

[10] In Murcof+AntiVJ, a ‘rain’ of shattered and colliding geometries, rapidly contracted and expanded spatialities, emerges through the projection of digital visualisations onto a similar type of screens. In both audiovisual installations, space is expanded through the interacting layers of light and transparency. Shattered, transmaterial and floating mixed-reality spaces appear. Uregulated and less coherent spatial formations highlight the fleeting and dynamically changing nature of such intertitiality.

Spatially Augmented Reality and 3D mapping systems offer the possibility of creating subtle interventions into built architecture. Artists likePablo Valbuena devise projection systems for drawing liminal spaces that destabilise perception. Valbuena’s in-situ diagramming is realisedthrough mutually interacting processes of input and output, creating an interstitial spatiality. In artworks such as Vanishing Points (2010), light is used with utmost precision for creating projected mappings of built architecture onto its surfaces. Architecture is extended, as ghost “architectures” occupy the floor, ceiling and the walls of the actual site. Such diagrammatic interventions create a “para-site”, that is, a ‘parallel’ reality that complements the actual site in a way that is subtle and challenges our perception. [11]

Pieter Van Bogaert offers a lucid description of how those interventions operate: “…. [the] projection scans the space with laser precision. But while scanning it, it slowly starts redrawing the walls, the windows, the skirting, the floor, and the floorboards… these projections are not dissimilar to…. injections of light that make the space implode… an incision… cuts deep into matter, one that performs scans in depth”. [12]

Vanishing Points presents an augmented space that hovers between diagram and actuality. Building on Pieter Van Bogaert’s description, the artwork combines the solidity and stability of the actual site, the simplicity of a map, the linearity of a 3D digital drawing, the hypotheses and potentiality of a plan. Mixed perspectives add an extra dimension of depth to the actual site. The projected 3D diagram seems to reveal a spatial dimension beyond the built and visible perimeter of architecture, through rendering built surfaces transparent by mirroring their actualities. Insterstitiality emerges through an array of interplays, such as, mapping and expanding, tracing and scanning, projecting and injecting light into built architecture. 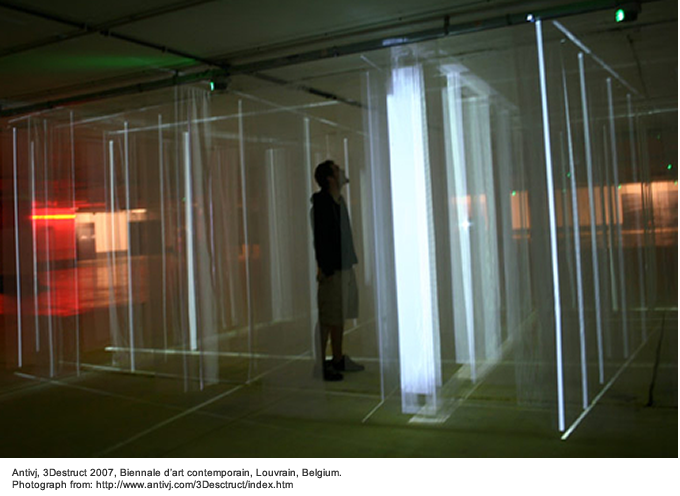 Interstitiality may also emerge from various intersections between built architecture and virtual geometries. One way of visualising such intersections is to delineate them through in-situ drawing processes. As seen in Impingement series by Gary Woodley. the artist delineates a kind of spatial ‘collision’ between virtual and actual topologies. Woodley uses CAD/CAM technologies (with architectural drawing software such as Form-z) for manipulating the co-ordinates of digital volumes, the transformation of which includes torus variations with Möbius twists, elliptical sections, etc. Black lines trace the areas where those ideal virtual volumes cut through the surfaces of the existing site. Those lines are traced with crayon, flexible tape or electro luminescent strips. [13]

In this way, the actualities and virtualities of the site are simultaneously visible, as the site is neither darkened nor physically modified. Spectators are surrounded by those spatial drawings. A sense of interstitiality emerges through the tensions between the immateriality of drawing and the solid planes of the site; temporality and permanence; the distribution of curved and rectangular topologies; perspectival depth and seemingly ‘floating’ 2D forms; simplicity and complexity; ideal and materialised forms. Despite the simplicity of those linear drawings, the Impingement series have a very strong effect on our perception of the actual site.

An expansion of interstitiality as emerging from the intersections between real and virtual spaces can be seen in Carlo Bernardini‘s work. Spatial drawings are created with light, for penetrating the boundaries of space in order to reveal various unsettling interrelations between thought/hypothetical and actual spaces. The artist uses optic fibres to create environmental-scale installations that do not only occupy but also run through one or more buildings and thus, they are not confined by the built surfaces of those sites.

The hidden apparatus and the particular configurations of those installations stun and puzzle spectators. It is not possible to gain an overall point of view of each installation, as it ‘pierces’ through various rooms, levels or even, buildings. As we read in Bernardini‘s writings, the artist uses light because of its ambivalent nature: light belongs to the physical world and at the same time, it surpasses physical boundaries. [14] 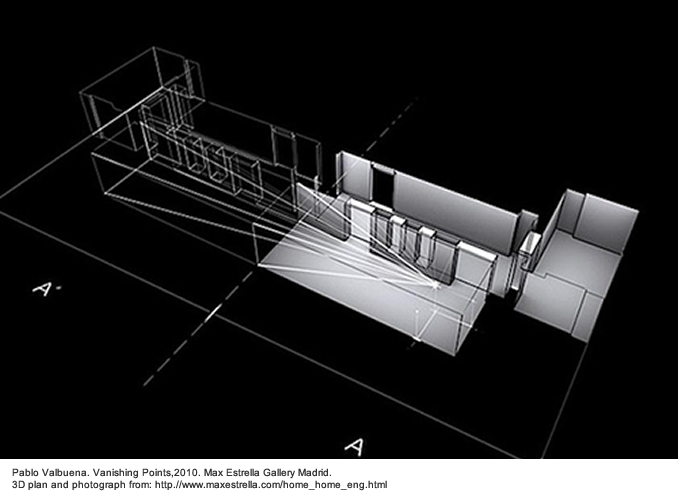 Most importantly, the complementary nature between light and shadow is explored for revealing what Bernardini defines as imperceptible “obscure zones”. [15] As Bernardini describes, shadow adds another dimension to matter and increases the perception of physical reality, while it remains untamed as “evasive and uncontainable”. [16] For Bernardini, the boundaries of architecture are (re)defined through a dynamic interaction of centrifugal and centripetal ‘forces’ between the perimeter and the contained void, which affect both. The creation of spatial light drawings is based on the following rationale: “If the line delimiting it apparently concentrates both volume and void, it can itself reverse those coordinates, the former giving way to the latter and vice-versa”. [17]

Artworks such asThe Light that Generates Space (2009-2010) and Spacial Code (2009) propose a kind of inter-dimensionality. For a static spectator, the light drawings appear to be an alien 2D layer onto our normal perspectival view of physical reality. As the spectator moves, the engulfing environmental scale of the installations is emphasised more. They appear to have no origin and to be of higher dimensions. One of the most challenging points of such interventions is how the artist exploits further the unresolved tensions between real space and thought space. As Bernardini describes: “In the inner tension between the two  real space and thought space  one tends to penetrate and permeate the other; intercommunication between the two brings about the environmental transformation of perception”. [18]

In this way, interstitiality emerges in Bernardini’s hyperstructural drawings through such spatial reversals that radically alter our perception of physical reality, challenging the established notions of architectonic order and spatial experience. Them most interesting aspect of those installations is that they inspire various metaphorical and poetic analogies. They can be perceived as linear tracings of various constellation geometries intersecting with our earthly constructions, or as architectural diagrams of interstitial atopian or utopian “leftovers”. 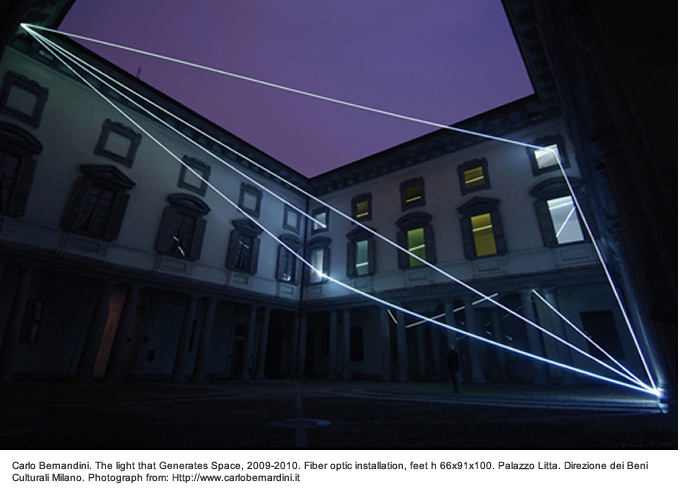