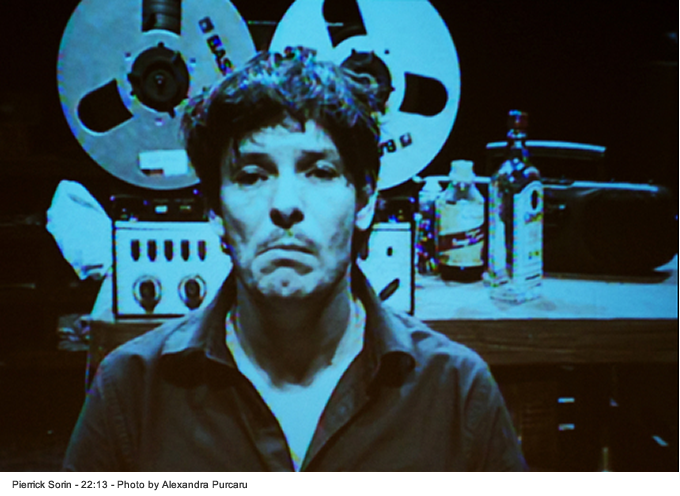 Paris is proving increasingly active on the artistic innovations of the digital scene. New centers dedicated to Digital Arts have been flourishing in the last decade. The Cube was born in 2001 in Issy (http://www.lecube.com), the CentQuatre 104 was born in 2008 (http://www.104.fr), and the Gaîté Lyrique just opened in 2011 (http://gaite-lyrique.net). The three of them are platforms for creativity and avant-gardist sound, open to installations, exhibitions, performance, dance, rhythm and noise.

Pierrick Sorin, a multimedia artist which expresses himself through various means such as sound and video installations, presented the project entitled: 22:13 (this title is likely to be changed at any moment) at CentQuatre. The artist focuses his attention on short films, on the art of bricolage and storytelling through images and projections.

A varied audience filled the room, even occupying the staircase seats. It was an audience that appreciates the work at the border between installations, video, humor and poetry. The show was a melting pot of pictures, shooting, creativity, and derisive monologues of fictional characters that invites the viewer to enter an Art studio cluttered with screens, cameras, work tables, colors and masks …

Pierrick Sorin made his debut in the eighties with short movies of himself shoted in super-8. In many of his projects he is an actor, director and critic, but in 22:13 he finds in the actor Nicolas Sansieran alter ego in harmony with his creativity and his humor. 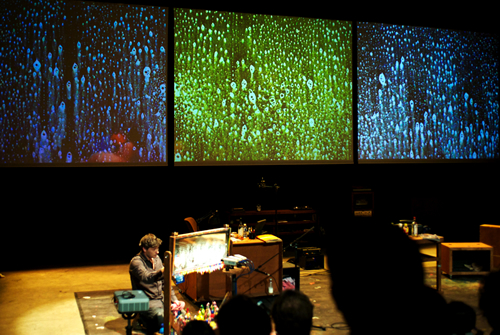 The protagonist moves frantically from one corner to an other of his studio looking for a new idea. He uses a very sophisticated language, he rearranges his materials, he brushes in order to “clean the space from mistakes.” he moves only in his creative space, self filming, formulating questions to which he replies, proposing projects, refusing, postponing.

Nicolas Sansier is a sort of digital version of Gregor Samsa. He wakes up, he falls asleep, he reflects, he invites himself to dinner, he refuses, then he finds new ideas for his art projects, he takes notes… he leaves them in the end. We feel like we are in a trance, taken from this whirlwind of events self recorded and then projected simultaneously on multiple screens. In this way the image becomes the mean through which the artist transforms his daily rhythms in tragicomic chapters.

The show begins with Nicolas Sansier intent to clean the three RGB primary colors on a glass plate. It is still unclear whether the protagonist is the real star of the show, whether he is the only protagonist. It is not clear either if we are actually on the stage or on the backstage.

We are involved by the pressing rhythm of its actions, by the only voice which enters the field and therefore we feel “we” are the public. What is interesting here is the style used by Pierrick Sorin – in fact he mixes various media, he depicts the artistic creation, he shares its image with the public. The spectator here is both the viewer and hearer of the creative process and its outcome.

Defining Pierrick Sorin‘s work is an hard task, especially if we know his past passions. When he was a teenager he wanted to become a writer, before finding out that everything had already been written and so he surrendered to art; he enchanted by the video and then he condensed and spread its passions. Pierrick Sorin prefers to represent himself as an ardent self-employed, rather than as an artist. 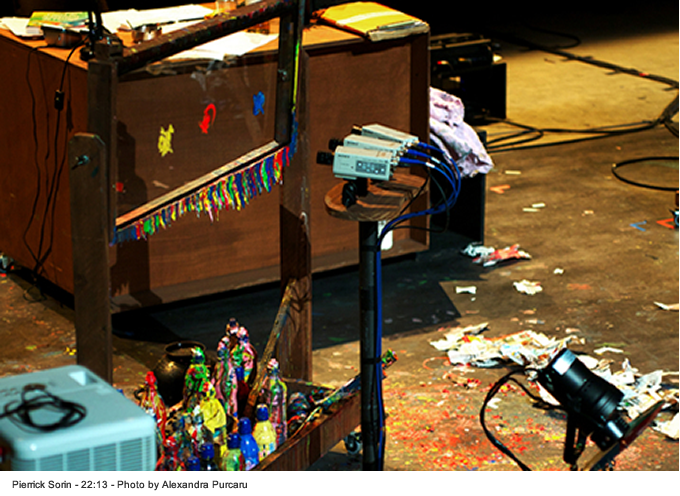 After the show, Pierrick Sorin has answered my questions about his performance and his work.

Alexandra Purcaru: What inspired this one-man-show? Tell me something more about your project 22h13 (this title is likely to be changed at any moment

Pierrick Sorin: 22h13 (this title is likely to be changed at any moment) is a portrait of the artist within the atelier and it is also an update of the creative process. You see a person who creates things, doubting … a person which shows the viewer how his ideas emerges . He reveals also his technical “tricks” and its “bricolages. What precedes material existence, visible to an art object is often more interesting than the finished product.

The finished work of art (by which I mean an object belonging to the plastic arts as well as the show and film) is always somethin static. The finished work of art moves away from real life in which the wandering, the conflict and the failure are important. The finished object denies by its very perfection, the process that produced it. In this show I wanted to express the mental and material background of creation and show the interactions between real life and creation. A French artist named Robert Filiou once said: “Art is what makes life more interesting than art.” This phrase whose meaning is not necessarily easy to grasp, has inspired my work.

Alexandra Purcaru: Why the choice of an “unstable” title ?

Pierrick Sorin: In recent years, communication has imposed his tyranny. We create even objects of art not for their aesthetic value, but because they are “an excuse to communicate.” In this “tyranny of communication” I have been tortured, even before having written a single line of the show in order to give them a title so that the “communicators” could do their job. I leaned on the idea and I gave the illusion of being a little free, so I choose an unstable title which is also the image of time passing by which makes it all a bit fragile. 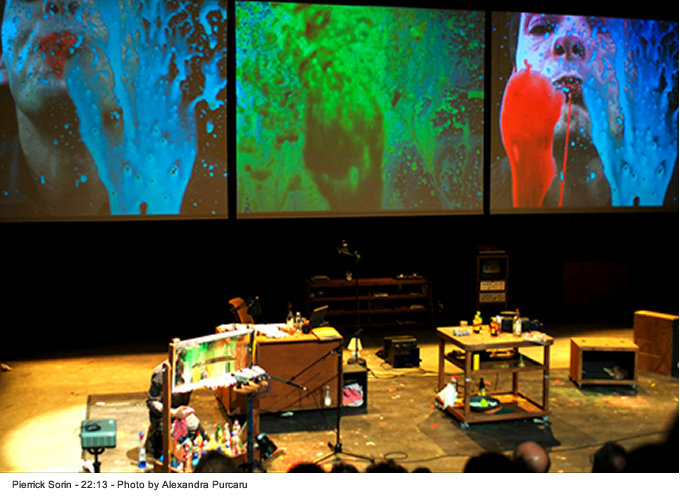 Alexandra Purcaru: Why optical theaters that were presented as your  work as a plastician at CentQuatre were also presented during the show?

Pierrick Sorin:I wanted the audience to be able to see at the same time the process of creating (by which I mean the art objects about to be made in the show) and the finished objects (the exhibits). I wanted to show that the exhibition and the show dialogues a bit, or at least I wanted to give the impression that they were dialoguing.

Alexandra Purcaru: In your performance, you explore the relationship between sound (continuous ringing of a telephone and answering machine) and images (projections on three screens). What fascinates you in this blend of visual and sound communication?

Pierrick Sorin:In this show, the sound elements – those that are recurrent and punctuate the drama – are part of a rather trivial daily reality (in particular the phone ring). They work just like the counterpoint of visual buildings within the imaginary and the poetry. All the sounds  brings the artist into a reality that bores him, which seems inappropriate. 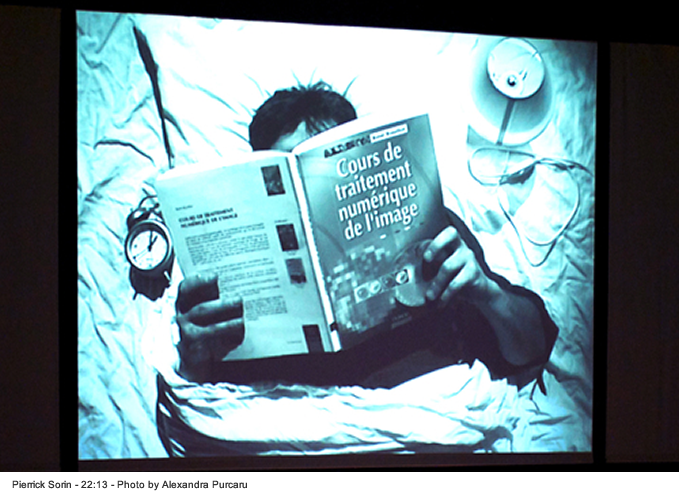 Alexandra Purcaru: In 22:13 we see a multiplication of points of view:  we see a live performance that is simultaneously projected on various screens. I refer to the scene where the protagonist mixes the three primary colors  why did you choose to amplify the actions that otherwise are so simple?

Pierrick Sorin:I am a video maker. Although the video is not the form of art that I consider to be the richest, it has some interesting qualities that have always guided me. For example, video allows us to have a very immediate “changes of points of view”. The change of angle, the change of scale, the fragmentation of reality, can be  combined to enrich the mind. They are able to open poetical spaces where all the metaphysical issues falls. Simple actions always have a metaphysical resonance. Changing the point of view is sometimes a way to hear this kind of resonance.

Alexandra Purcaru: You are an artist, a video maker, an inventor of stories of which you are often the only actor. In 22:13 we find ourselves in front of the fresco of a contemporary artist. How come we never see characters coming from outside? What is the relationship between the artist and the outside world?

Pierrick Sorin: I have a character which is quite closed. I love people in general, but I think that after all the human race is condemned to loneliness. I am also tempted by the theory of “solipsism”, from a theoretical point of view, at least. Pierre Levret, which is the main (and only) character of 22:13 lives in a relationship with “the other” in an imaginary way (for this reason he dresses up and puts wigs).

Even his psychoanalyst is an avatar of himself. That said, if I was not an only child I might have had a very different view of things. I am not competent to speak in general terms the artist’s relationship with the world. I just feel that the artist is often mentally retarded. Or, more soberly, an artist is someone who finds it difficult to adjust to the outside world because of various difficulties and permanent conflicts. 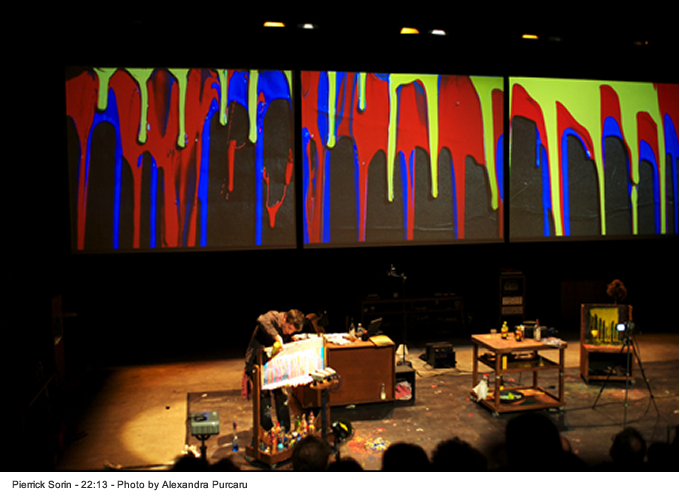 Alexandra Purcaru: Your way of telling the artist days reminds me of Mrs. Dalloway’s days: you multiply the events like in a intimate visual and sound diary which is both told and staged. How did you handle the pace of the diary and the hectic pace of life of the artist.

Pierrick Sorin: In real life I rock like many people – but more than others, even. I oscillate between inner thoughts a little ‘soft’ and moments of hyperactivity. I built this show on this duality, simply following my spontaneous inclination. I carefully made some breaks in the rhythm, in order to keep up viewers’ attention. 22:13 is a very sincere and spontaneous work, but it is still a show: there are some constructions and stylistic effects which are designed to make things acceptable, even “pleasant. ” Despite what we may be closed, we all love to be loved by others.