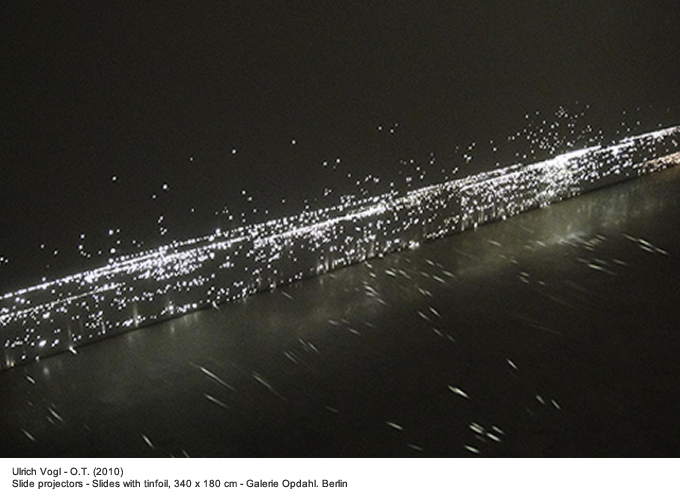 Ulrich Vogl (Kaufbeuren, 1973) grew up in southern Germany. He studied in Monaco, Berlin and at the School of Visual Arts in New York. He says he inherited his artistic streak from his grandfather, who was a researcher and inventor. This familiar and romantic world belongs to Ulrich Vogl as to his works, which are a mix of invention and idyllic evocation, purified by clear and defined forms, minimal colour choices that simper away every affectation and confers the work a concise and intriguing aspect.

O.T. (2010) is a beautiful, intimate opera, a rhythm-inspired technology in the composition of slide projectors (different to each other) that set up a night view of the city, which the artist is going to describe in the interview that follows, as a world in equilibrium. This quest for harmony, compensation point of convergence between nature and science, is disseminated in Vogl’s artistic research, like a light that indicates what may be the thin line between conflict and harmony, prose and poetry, reality and imagination.

He prefers these last categories, that analyzes and provides in detail, variations, traces of which the works are scattered: the tiny holes that go beyond a tin foil create an atmosphere, a landscape, a night vision in O.T., in Fernrohr ( 2009), and in Meer (2009) are transformed in the infinite space of the kaleidoscope and the sea sight. The ability to imagine is the quality that inspires Vogl to illuminate a concrete block with the light of a projector in Observatorium (2010), to create a starry sky with a crescent moon.

So he, again, combines technological and branches or plants to create shadows of another reality in Pool (2010) and generates islands and clouds from tin and sugar in Of Islands and Clouds (2008). This presence of lirism should not deceive us, since the artist does not expect to reach poetry and emotion only, but also a balance of the worlds that echo in nature, humanity, technique and technology. 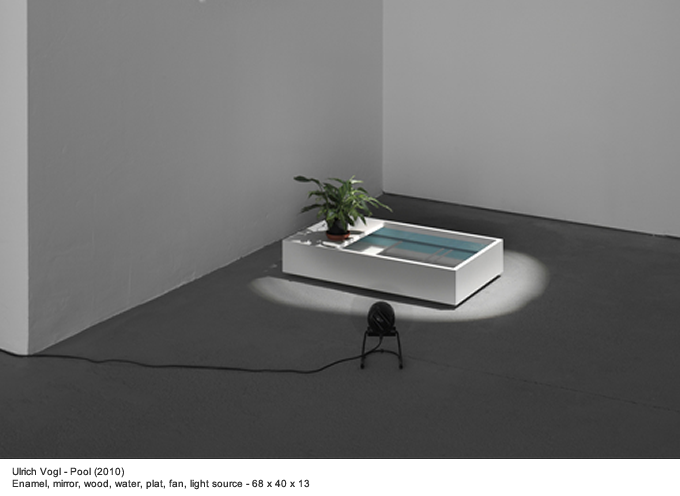 I talk directly with Ulrich Vogl, in the interview that follows, about balance, convergence and the reasons that inspired the research and development of his works.

Silvia Scaravaggi: Which themes and poetics are at the basis of your creative research?

Ulrich Vogl: Atmospheres and natural phenomena as well as everyday culture in large cities are the pillars of my research. I like to combine these worlds. Everybody knows how beautiful a sunset can be. At the same time a picture of it is most likely to turn out kitschy and meaningless. I like to recreate those phenomena and take them seriously – they are not kitsch in themselves – they are part of us.

What I do is to create them through things that surround us every day. It is important to show how the artwork that recreates, e.g. the sunset in the gallery is made at the same time gives space for the mystery that surrounds us. The balance between the object and the phenomena that they produce is important.

Silvia Scaravaggi: In Italy you did a Residence at Viafarini (Milan, 2008) with an exhibition with Benjamin Greber (2008) and a solo show in Rovereto (watching the stars, Paolo Maria Deanesi Gallery, 2009). How have been these experiences like?

Ulrich Vogl: They have been great experiences. I especially enjoyed the time at Viafarini. It is a good place, with many interesting people connected to it. It seems to me that there are not so many places like this in Italy  like a Kunsthalle or Kunstverein. But they are important – for the dialogue with the audience as well as the laboratory for artists. That is different from a museum or a commercial gallery. 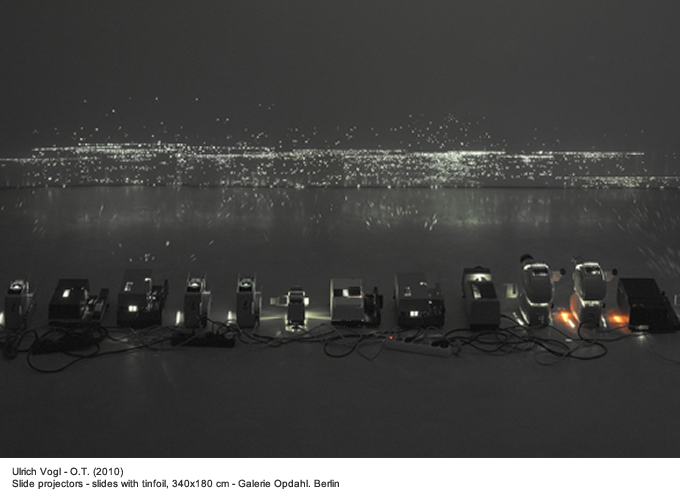 Silvia Scaravaggi: I would like to choose one of your recent and very fascinating work: O.T. (2010). Could you explain to me how is it made and what is it about?

Ulrich Vogl: There are 14 slide projectors that are standing next to each other. Each one has a slide with a piece of ordinary tin foil in it, in which I made holes with a small needle. The light goes through the holes and hits the wall. What appears is a kind of cityscape, like standing on a hill in Rome and looking over the city – or flying onto Los Angeles. Even though all the projectors use the same type of lamp – the light colour that hits the wall differs from heachine to machine – from very white to quite yellow.

Very similar to the different kind of lights in a city. The ventilation of all the projectors together produce a permanent but somehow distanced sound. It is almost a romantic scenery – but there is the line of projectors between the image and the viewer. The ventilation sound that could be quite annoying turns into something soothing. The piece draws you in like a film – but unlike a film it always keeps you very aware of what it is, since the “making of” is always part of the piece. In an exhibition this sort of equilibrium between film and a sculpture is what I am looking for.

Silvia Scaravaggi: Light has a main role in your artworks. Why? How do you work with it?

Ulrich Vogl: Light has something of a performance characteristic. It can be turned on and off – the show has a beginning and an end. It is so much and at the same time so little. It is very present but also very ephemeral. I like that. I also like that light draws people in. I want to “get” people who often do not bother to look at art.

Silvia Scaravaggi: And what about shadows? Which role do they play in your artworks and how they communicate with the audience?

Ulrich Vogl: I use shadow in different ways. In Fenster/ Window or in Pool, the shadow does the drawing. I put tape on a mirror and the missing light of the reflection becomes the positive image. There are also plants or branches involved in the pieces. They move with the wind, so that the shadow-image keeps permanently changing. It resembles something that we experience in our everyday life: The sun hits through a window and performs a little shadow play on the wall.

Like in a shadow theatre. In a way it is an archaic way of film. In Fenster and Pool the phenomena is artificially produced. And again the “making of” is present. It speaks of illusions and disillusions at the same time. In Limelight I use the shadow so that the viewer becomes part of the piece. Three round mirrors are on the floor – on two of them is a cut-out image of a microphone. A third microphone is directly drawn on the wall. This microphone casts two “real” shadows through the reflection of the mirrors. As soon as the viewer gets closer, the viewer’s shadow appears on the wall. Her or his shadow can even sing into this microphone image. They become part of the piece. 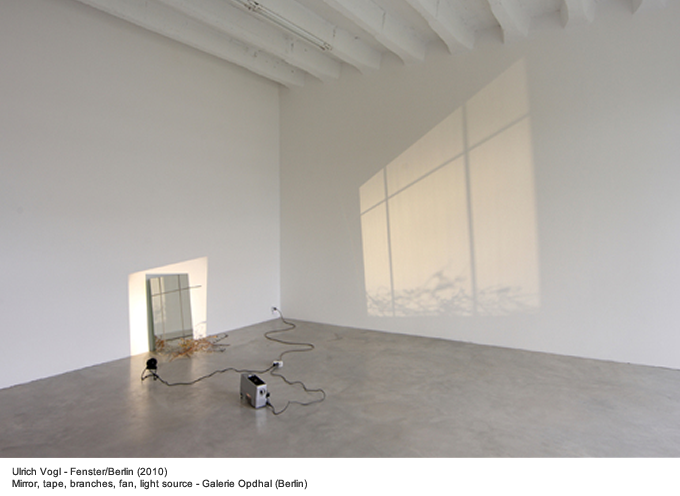 Silvia Scaravaggi:Draqing is also a basic component of your practice. What does Extension of Drawing mean?

Ulrich Vogl: When I started my practice, drawing was still seen by many people as a “serving practice”, meaning that it was not a “full” medium in itself but more a preparation medium in order to create a final artwork of painting, sculpture, film etc. That vision highly underestimated the potential of drawing. The way I draw has little to do with taking a paper and a pencil. It is about pushing the medium into space, movement, different materials etc. One could ask: what is still “drawing” about? I think my vision of drawing comes from its basic direct simplicity and the formula “line versus surface”. Extension of Drawing underlines the claim of drawing to be considered as a full medium as well as the experimental character of it.

Silvia Scaravaggi: You have also worked with animation film, isn’t it? Why did you choose this language?

Ulrich Vogl: I never liked the static character of drawings and I am interested in time and light. In combination with drawing, the step to an animation film was very close. But after some films, I realized that “only light” coming out of a projector was not enough for me. I realized that I was interested in the physical presence of real materials as part of my art. And I desired to have the possibility of real physical interaction of the viewer with the piece – which is hard to do in films.

So I stopped making animation films. In addition, I am not a very patient person – and it is hard for me to sit through a non-narrative film. I want to know immediately if I am really interested in a piece or not. Even though I am not making films anymore, I am trying to integrate the qualities I appreciate in them and convey them into my present work. 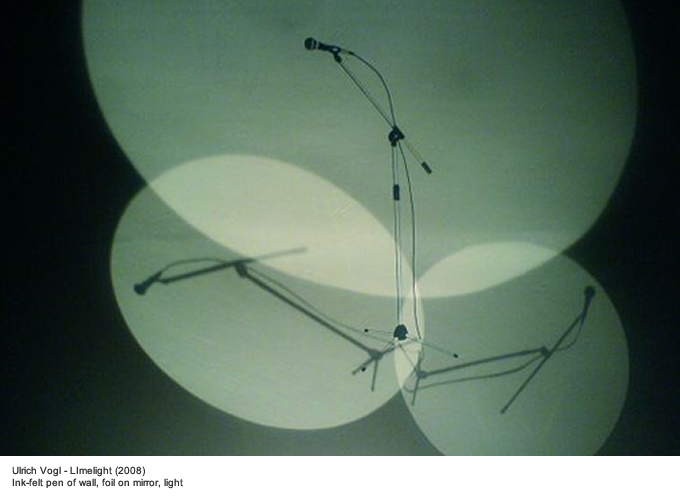 Silvia Scaravaggi: Slide projectors often appear in your recent works [(O.T., Strich (2010), Fenster-Berlin (2010),Kubus-Dia (2010)], do they mean something special? Are they always different to each other, is this important as well?

Ulrich Vogl: Slide projectors once were part of our daily lives and they are not anymore. So while they are something very personal and familiar to us – at the same time they are leftovers. They were part of a world where most things were still produced and consumed in the same country. They were there before “Made in China”. They belong to another time. They are nostalgic things to us – and rubbish at the same time.

Each one has its own story – like sitting through the 300 boring pictures of the boring vacation of the boring neighbours. I like all of that. I do not want to tell people what to think – or where their thoughts should go – but I am happy when art makes the thoughts wander in many directions. Objects like slide projectors can help to do that. Of course I also like the sculptural quality of them – and so for the cityscape O.T. I did gather different ones, so that they almost formed a skyline by themselves.

Ulrich Vogl: That is right. Take the chandelier for example. It is a symbol of wealth and splendour, a little bit out of date, tacky in a cheap version or too obviously used as a status symbol yet beautiful and magnificent when put into the right place. I play with it creating the image of a chandelier by scratching into a black pane of glass. From a distance the piece looks like this magnificent drawing, blinking and shining. As we get close, it is more like an amateur scribbling into the hard surface of the paint. 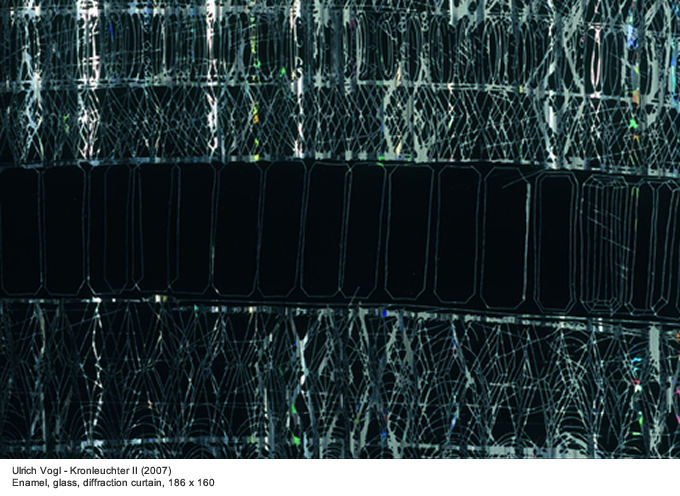 Silvia Scaravaggi: Is the imagination more important than the object?