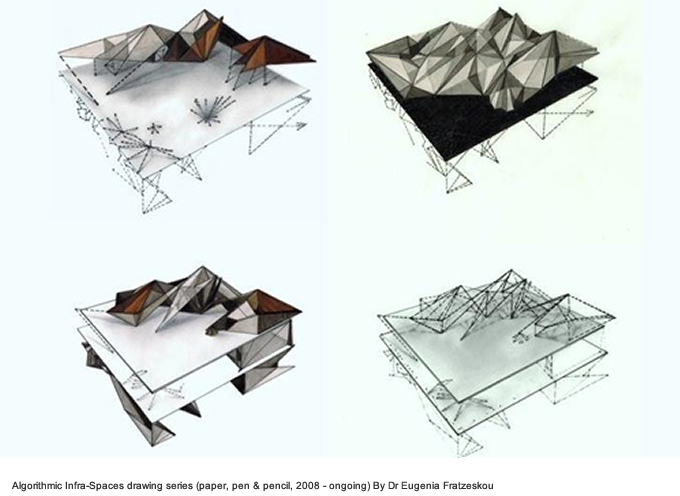 This article offers an investigation into how drawing infra-spaces creatively reveals the unknown types of digital geometry that emerge from the algorithmic ‘flows’ of digital visualisation systems, and how our perception of science, technology and visualisation is redefined. This is the second part of this two-part essay.

There seems to be an inevitably ‘unending’ scientific controversy regarding the nature of reality, as scientists’ focal point appears to be neither realism nor ontology, but paradigm dominance. It is commonly argued that scientific theories (particularly those concerning quantum physics) seem to be incomplete, inaccurate and incompatible with each other, asthey obscure the true complexity of reality and, most importantly, the interdependence of micro-worlds and macro-worlds. [1]

What is evident is that a ‘succession of scientific paradigms’ is by no means clear and settled. A closer investigation of what is understood as ‘paradigm shifts’, may show certain ambiguous interchanges between reduction, abstraction, complexity and complementarity, in a context where there is not even a single definition of complexity that seems to be universally accepted. This situation is most revealing of the inevitable limitations and shortcomings that characterise our attempt to study and map reality. 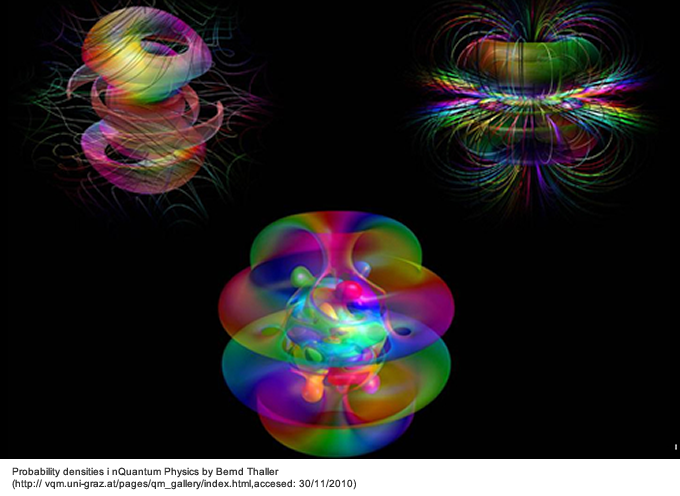 Essentially, the purpose of geometry is to simplify and structure reality, in order to enable its visual representation and study. Nevertheless, non-Euclidean geometry (the role of which has been particularly important for relativity theory) does not only tend to be highly abstract, since it cannot be verified empirically, but also, visually chaotic. As Steven Connor explains, the Cartesian notion of space is now outdated, because non-Euclidean geometry and Einstein’s relativity theory have ‘multiplied and relativised’ space.

The scientist C. S. Unnikrishnan presents a systematic investigation of non-Euclidean geometry. As he explains, non-Euclidean geometry may have more than three dimensions that are ‘curled up into ultra-small unobservable sizes’.[2] Consequently, their visualisation and study tend to be highly problematic. As investigated across disciplines, scientific theories and mostly quantum physics are based on shaky grounds, as they contain ‘unobservables’ i.e. space, time, potentials, fields, waves with no reference to matter.

Indeed, as C. S. Unnikrishnan explains, ‘physical states’ are associated with ‘abstract vectors in an abstract mathematical space’ that is statistical and a-causal..[3]

Data visualisation and scientific simulation have been used in science and across disciplines for visualising and manipulating the invisible co-ordinates of the real world.As Lev Manovich describes: Contemporary pure and applied sciences, from mathematics and physics to biology and medicine, heavily relies on data visualisation .[4]

Nevertheless, all the limitations that have been discussed thus far still prevail, despite early hopes, like Einstein’s, that new technology, expanding into digital visualisation, would eliminate indeterminacy. 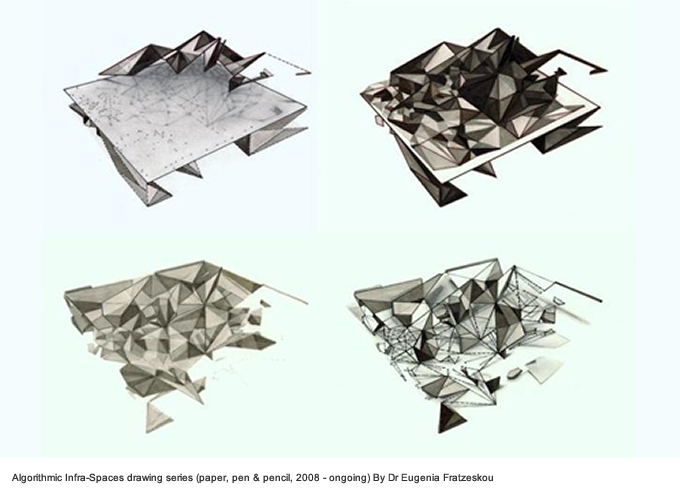 The workings of VR itself are ambiguous.. [5] Although simulation can be generally described as a process of synthesising, it also involves analytical processes. As we have seen in the first part of this essay, the algorithmic infrastructure of digital visualisation systems is itself characterised by precarious interplays between abstraction and complexity that cause new ambiguous relationships between parts and whole to emerge. Moreover, it is impossible to reach the ‘absolute truth’, due to the distinction between the scientific object and becoming; exactitude and change.

The scientific ‘object’ is changing constantly and thus, natural laws have to be continuously revised and redefined under the light of new evidence. The world appears to be unconnected, diffused and uncertain as it is visualised through the algorithmic veil of the digital geometry that is not only abstract but also unstable and paradoxical.

We are thus, lead to the conclusion that, instead of seeking to achieve the unattainable, that is, to map reality with exactitude and certainty, the most relevant challenge would be to map the boundaries and uncertainties of our knowledge and its applications. The limitations of our knowledge and the means of studying reality have been gradually revealed, particularly, through the development of Quantum Physics. Nevertheless, the use of digital visualisation (data visualisation, scientific simulation and so on) tends to be ratheranoxymoron. On the one hand, it is used as a means of analysing, simulating and predicting reality, evoking thus,the sense of objectivity, certainty and control, as the probabilistic space of VR is ‘forced’ to look ‘real’; as possibility becomes a kind of “reality”.

On the other hand, we acknowledge that emergence stems from complexity; from the invisible and unsettling potentiality fields between the transitional states of transformation and exchange. Consequently, we may argue that such a condition of emergence calls not only for new modes of presentation, interaction and aesthetics in relation to the issue of boundary, but also, of understanding reality per se. What it is proposed in this essay is that instead of introducing unpredictability, its hidden existence in digital visualisation systems can be creatively revealed, for exposing the relativism that is hidden behind the facade of the assumed objectivity and transparency of science and technology. 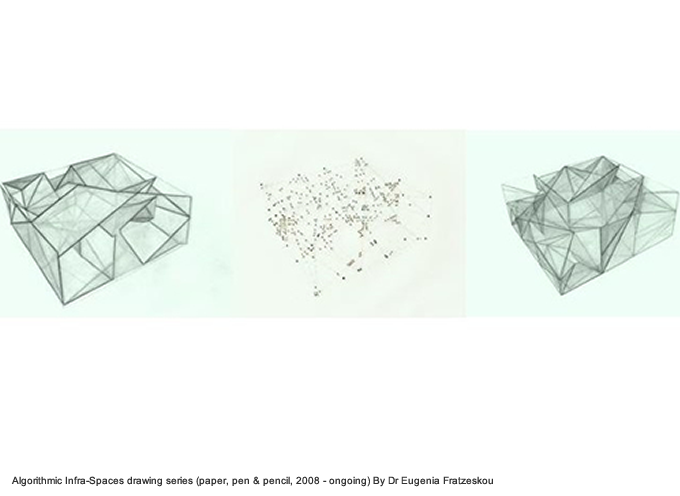 As we have seen in the first part of this essay, digital visualisation can be contradictory and disproportional to its input due to its inherent flaws.[6]Inevitably, a seemingly simple and consistent method of digital modelling yields unexpected geometric visualisations and behaviours.A digital solid is meant to be generated through the gradual conversion of binary digits to geometrical points. Those points begin to form polygons that they are subsequently hierarchically united with each other to create a simulation of 3D surfaces of solid volumes within a digital mathematical space.

The software application calculates point-by-point the areas where solids are intersected, unified and/or subtracted. As it is evident, the level of complexity and inaccuracy increases as we pass from one computational level to the other. We begin to realise the wider complexity of the co-ordinates that cause inconsistencies between cause and effect. Complicated excessive beginnings & elliptical ends emerge, oscillating between various kinds of order and disorder.

The ‘fossilisation’ of the algorithmic “space” of VR through the simulation of ‘robust’ valid solids proves to be unattainable. As the inherent irregularities of computer 3D modelling systems dynamically undermine the geometrical completeness of digital models, digital solids become invalid. The visualisation of the boundary representation of a digital solid becomes paradoxical, as the distinctions between void and solid volumes, exterior and interior sides of the digital solid tend to collapse. The case of Boolean volume-based modelling is representative of how such inconsistencies occur.

Invalid solids are compound, because the original intersected, unified, or subtracted solids cannot be fully integrated to constitute a single solid. The orientation of their surface becomes highly ambiguous, and thus, their geometrical elements are neither well-connected, nor properly placed by the application. Excessive, non-hierarchical polygon accumulation also occurs. The ‘traces’ of the construction ‘history’ of a solid remain visible, as its surfaces maintain the colour, orientation, and triangulation of the original solids from which, it has derived. The boundary inconsistencies of an invalid solid include holes, dangling, infinite, self-intersecting, folded, superimposed faces etc.[7]

The qualities of the emergent digital boundaries reveal paradoxical kinds of dimensionality & geometry. Nevertheless, the subtle transitional states of transformation and exchange cannot be deciphered just by looking at boundary representation alone. Consequently, new types of drawing are needed for enabling the creative ‘tracing’ of thosechanging qualities, in a way that are left ‘open-ended’ as unsettling interacting fields of possibilities, for revealing the unknown geometry that emerges from the ‘depths’ of the algorithmic ‘flows’. As part of my latest drawing research, a series of hand-drawn diagrams enable the visualisation of the ‘hidden’ stages of digital boundary generation, during which, new kinds of paradoxical geometries emerge as we pass from one algorithmic model to the other.

These stages are not visible when modelling solids. Nevertheless, through the drawings, it has been possible to invent the possible visualisation of those stages creatively, based on how the computer infrastructure operates. The emergence of infra-spaces is of particular interest. They unexpectedly occur between various geometrical orders. Unpredictable shifts occur between ideal, realistic and invalid/viral forms that have areas of floating surfaces, invisible surfaces that cast shadows, excessive boundary accumulation and/or ‘nesting’, ambiguous depth, surface tension, dynamic non-oriented constellations of geometrical points, reversed geometry and many other kinds of uncertainties and paradoxes. [8] 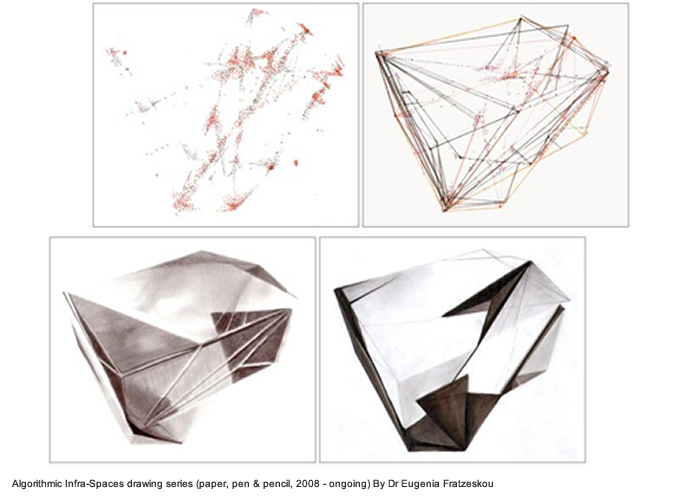 As opposed to singularities, series, sequences and progressions, the emerging infra-spaces concern dynamic and unpredictable transitional stages and their exchanges. In infra-spaces, an unsettling multilayered creation and ‘tracing’ processes are involved. Such processes do not comply with the doctrines of formalism, constructivism and their opposites. Complicated beginnings emerge as there is no ‘ground zero’, while elliptical ends occur due to a constant asymmetry that causes new fields of creative possibilities to emerge.