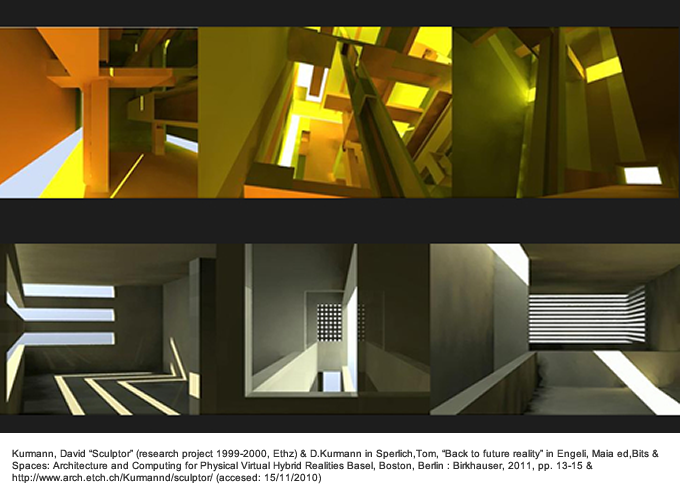 This article offers an investigation into how drawing infra-spaces creatively reveals the unknown types of digital geometry that emerge from the algorithmic “flows” of digital visualisation systems, and our perception of science, technology and visualisation is redefined. This is the first part of this two-part essay.

An algorithm is an automated language of sequential instructions through which a computer carries out calculations. As Wright describes, computer algorithms are fully ‘automated’ and thus devoid of any meaning. [1] The creation of the algorithm is part of the development of mathematical formalism that has been based on the probabilistic relationships between predetermined abstract sets that characterise the transition to the 20th century ‘rationalism’, the abstract vision of Modernism and the excessive trust and over-confidence in digital technology and visualisation. 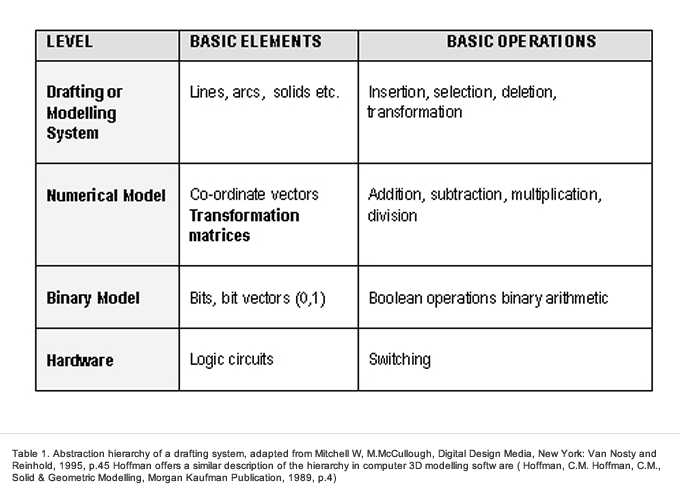 In his discussion of what Lev Manovich identifies as the ‘paradigm shift’ from modernist reduction and abstraction to complexity in art and science, the following important shortcomings of AI that characterises this shift, is stressed: “… soon after, Artificial Intelligence research that tried to reduce human mind to symbols and rules, also run out of steam…”[2]

Boolean set operations have enabled the design and the practical implementation of computer algorithms. The development of Boolean set operations has been seminal for the codification of reasoning into computer algorithms. Boolean ‘logic’ has been asyllogistic as it cannot be verifiable through logical deduction and as its premises are arbitrary. Bertrard Russell explains that Boole has contributed to the “recognition of asyllogistic inferences” from which “modern symbolic logic… has derived the motive to progress”.[3]

Such a relationship is axiomatic, as it does not need to be proved through the logical deduction that concerns real things. As Martin Davis describes, that development results in the ‘artificial language of logic’ that is practically implemented as a computer algorithm [4]. Nevertheless, despite the fact that Boolean Algebra has enabled the creation of computer algorithms and volume-based digital modelling, the ‘ghost’ of Boolean inconsistencies remains in the algorithmic orders and its full expanse has yet to be creatively explored. 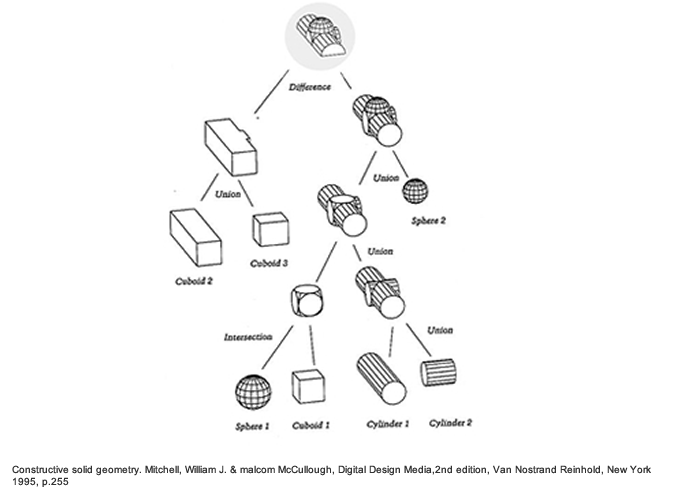 A computer 3D modelling system has a highly complex infrastructure that consists of diverse computational models i.e. binary, numerical and graphical [Table 1].The generation of a digital form is achieved through a series of data conversions that occur between those models with the aid of transformation matrices. As a result, an ever-growing number of incompatibilities occur in such a precariously increasing heterogeneity of the computational infrastructure, as higher-abstraction levels are added.

It was soon proved however, that Boolean set operations are a highly inconsistent and unstable modelling tool, due to the imprecise conversions between the levels of the computer infrastructure. [6] As Braid exaplins: “… no easy correspondence between Boolean operations on volumes and Boolean operations on bits is to be found”.[7] 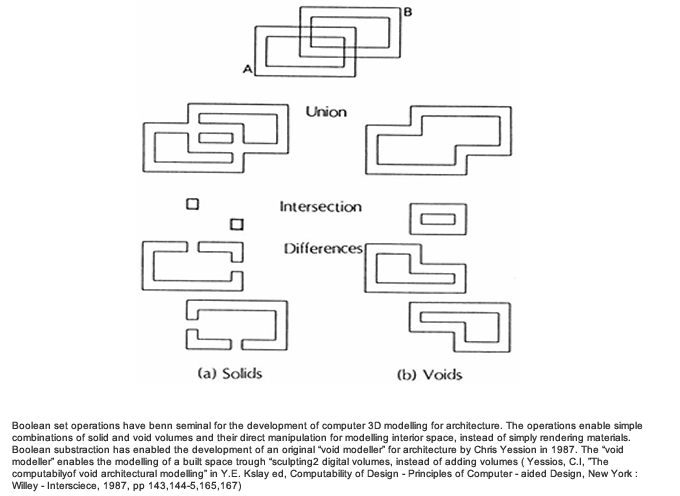 That lack of correspondence became worse when Braid attempted to achieve exactitude in digital visualisation. He attempted to solve the problem of the impractical visualisation of solids through a large number of bits, and the subsequent inconsistent transformation and placement of those solids.[8] Braid decided to implement the use of a “transformation matrix“, for describing a solid metrically.[9] Such a ‘matrix’ indicated the numeric description of the shape of solids. That description substituted the ‘bricks’ of Braid’s first scheme, so that the size of the stored information could be reduced.The ‘matrix’ described the hierarchical combinations of solids, enabling thus, the creation of computer 3D models through constructive solid geometry. [10] In that way, the boundaries of a solid were visualised on the ‘drafting system’, following the specification of their geometrical elements in the “numerical model”.

Nevertheless, instead of achieving the elimination of the ‘side-effects’ such as, inconsistency, complexity and uncertainty, any attempt toimpose the arithmetic order of the ‘matrix’ is deemed to fail, as the ultimate degree of exactitude in computation and visualisation is unattainable even in the latest types of digital visualisation systems. Apart from the philosophically flawed roots of Boolean algebra and the inherent complexity, contradiction and imprecision of the binary level, the whole computational infrastructure tends to be highly abstract, irregular and unstable, as it is inherently probabilistic and a-causal.[11] The numerous conversion errors in the interchanges between the computational models produce paradoxical outcomes, as several precarious interplays occur between complexity and abstraction. As Hoffmann observes: “…the interplay of symbolic and arithmetic computation is a critical dimension in solid modelling…”[12]

Indeed, in their separate reviews, Requicha, Hoffmann and Shapiro confirm that such errors derive from the imprecise conversions between the binary, numerical and graphical levels of a computer 3D modelling application. [13] Essentially, the discord between the models of the computational infrastructure arises, as each of them conforms to very different sets of laws e.g. Boolean algebra axioms versus geometric proofs. 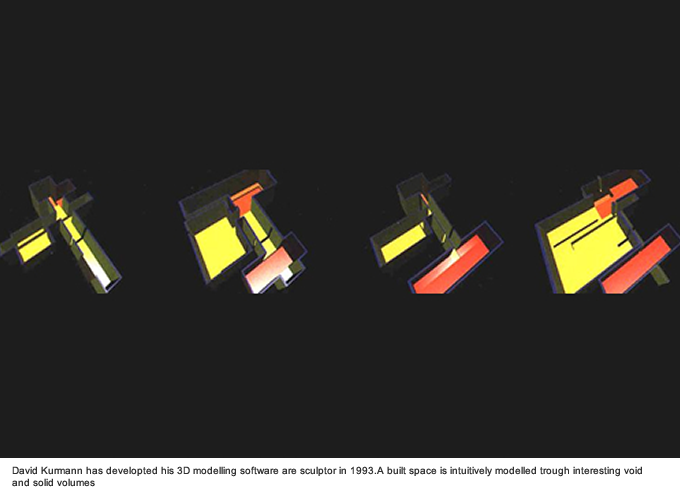 As can be seen, computer 3D modelling proves to be too abstract and inconsistent for modelling and visualising 3D volumes, let alone describing the material relationships that exist in the physical world.

[3] – Nambiar, Sriram, “The influence of Aristotelian logic on Boole’s philosophy of logic; the reduction of hypotheticals to categoricals”, in A Boole anthology: recent and classical studies in the logic of George Boole, James Gasser (ed), Dordrecht, Boston, London : Kluwer, 2000, p.217.