Pain Is Not The Game. Virtual And Real In Videogame Art 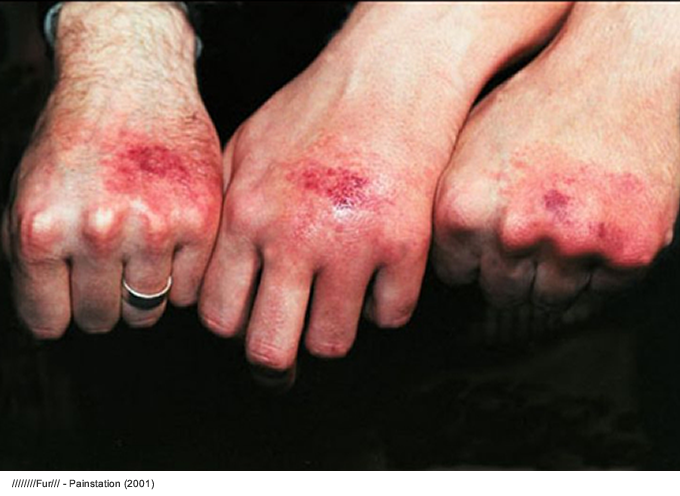 When the German artists Volker Morawe and Tilman Reiff were young they used to play games that deal with punishment in some ways. The most popular was probably Folter-Mau-Mau Tilma Reiff explains. A simple card game where the looser would be punished according to the cards that remains in his hand. We remembered the special tension that arose from the threat of possible punishment and the excitement that came with it. The relief if you came away unpunished. It simply adds a lot of feelings to the experience.

Today we spent a lot of our time playing games in the virtual worlds. Compared with the videogames from Reiffs and Morawe childhood the graphically development has been enormous. Videogames today have photorealistic high definition graphics, but still the virtual gameworlds misses some important experiences compared to a simple cardgame as Folter-Mau-Mau.

You can be beaten, kicked, stabbed, hit, shoot, drive of a cliff, jump from a skyscraper or be blown to pieces, but whatever happens on the screen you don’t feel any physical pain in your body, because its only a game. The lack of physic experience in videogames becomes quite obvious when you attend one of the Re-Enactment by the artists Eva and Franco Mattes performances in Second Life. Eva and Franco Mattes have re-enact some classic performances from the history of art as Chris Burden Shoot, Valie Export and Peter Weibel’sTapp und Tastkino and Marina Abramovic and Ulay’s Imponderabilia. 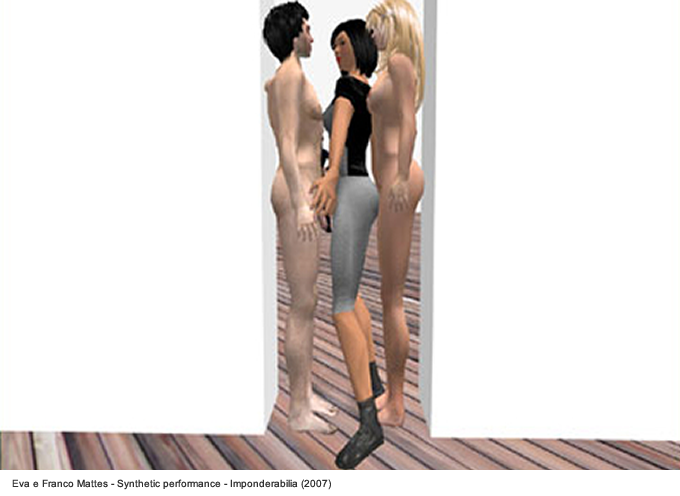 In the original performance Imponderabilia from 1977 the artists Marina and Ulay stands naked facing each other at the entrance to a museum and the visitors have to pass between there naked bodies to enter the exhibition. Eva and Franco re-created the same performance in Second Life, but to squeeze yourself between two naked graphic characters with your avatar is not the same as in real life. Several aspects as odour, heat, friction, facial expressions, and other bodily experiences are missing in the virtual worlds, they are lost in the transformation between reality and virtuality.

To see a graphic avatar got shoot as in the re-enactment of Chris Burdens performance Shoot from 1971 is something else than to be in the gallery and see the bullet hit the flesh of a real human. I think Chris Burden would agree with me when I say that it’s a big different to take a bullet in real life and in a virtual world. This is also what Eva and Franco Mattes performance puts its finger on. The virtual world is a safe zone, you can do and be anything you like, because there is no physical danger threatening your body. You can of course get a mouse arm or a stiff neck if you play videogames to long, but that’s something else which is connected to what you are doing in the real world not in the virtual.

Since the videogame industry is struggling towards a total immersion in videogames there are of course many game designer and artists that have tried to re-create the missing sensations that are lost in the transformation. We have today Xbox 360 kinect capture technique, the Wii-consols and forced feeback controls and of course the Cave and VR-technique, which is expensive installations where the visitor with help of special glasses and gloves can move and interact in a virtual rooms, but still there are many human senses that are missing in the virtuatl worlds. Pain for example. 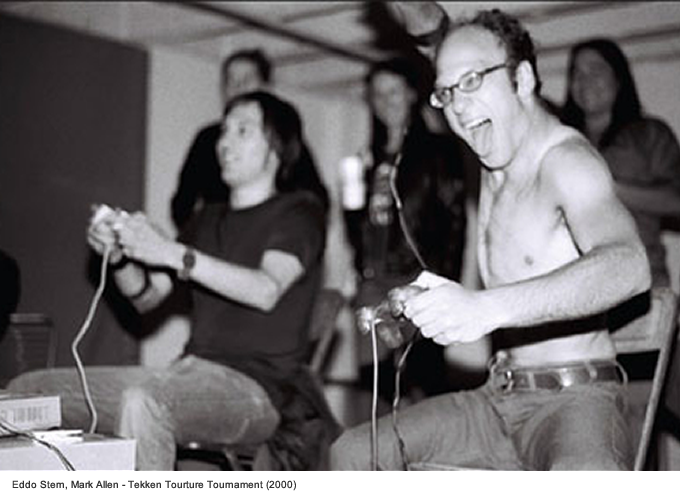 The artists Eddo Stern and Mark Allen, did in year 2000 a performance which they called Tekken Torture Tournament. Tekken is a martial art game, in which you should kick and hit your opponent until he is defeated. In the performance the participating players were equipped with special bracelets. When the player was hit by the other player on the screen he got an electric shock in the arm. The more hits the opponents got the more pain the second player had to suffer. The bracelet was a form of interface that could connect the virtual pain with the players psychical body and transfer the virtual violence into the real world.

Another example of an art work that are transferring pain from the virtual world into the real is the game Painstation. The German artists Volker Morawa, Tilman Reiff and Roman Kirschner, from the artist collective ///////fur/// have development a gamecabinet which basically is a simple PONG game. When you miss the ball the opponent use to win a point, but in this version the loser is also punished by an electric shock, heat or a whiplash on his hand. The virtual defeat is transformed into real pain, as in “Tekken Torture Tournament”.

The players that can not stand the pain and removes his hand lose the game. Tilman Reiff says that: “the group met at the Academy of Media Arts Cologne. And it was during our studies we moved in together and had a shared office in our apartment – one year later in 2001 the Painstation was born and we founded //////////fur//// as a label for our collaborative work. Painstation is based on the idea to incorporate the body into the gaming experience, to make gaming a more physical experience.” 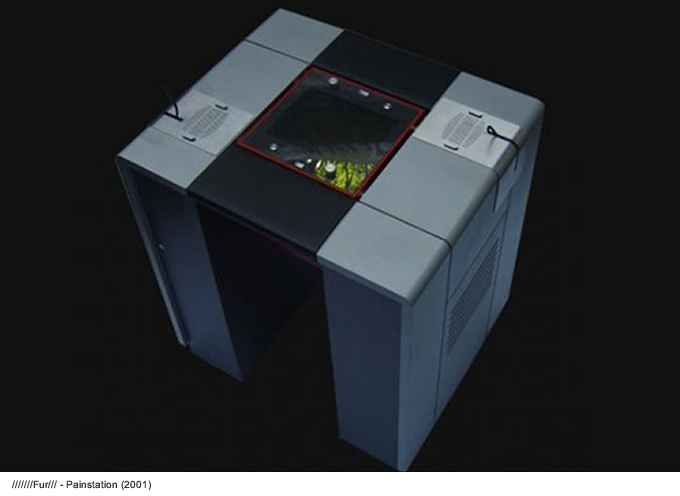 In Riley Hamond installation What it is without the hand that wields it (2008) you could also find the discussion about the physical experience of gaming. The installation is an electronic sculpture attached to a server where people played Counterstrike. The sculpture consisted of a number of blood bags with tubing that was connected to nozzles, the nozzles were opened when one of the players on the server was shoot. The virtual killing and violence ran so to speak over to reality, the virtual blood in the game was solidified on the gallery floor.

In Hamond’s work it’s not the pain that are transferred but instead fluids, virtual blood is leaking out from the server and is transformed into “real” blood on the gallery floor. As is the performance Shoot by Chris Burden it’s a big different to see blood in a videogame or in a film and stand in front of it, even strong guys use to faint in the sight of real blood bleeding from bodies.

The big difference between what we experience and feel in virtual worlds and the real world is also something that could affect our behaviour. The virtual world is a fantasy and we are not physical affected in any way by our actions so we are doing things we usually shouldn’t’ do as killing people, driven to fast, jump from skyscrapers etc. But what happens when the boundaries between virtuality and reality not are so clear and fixed. InWafa Bilal installation Domestic tension these questions are in focus. During a month in 2007 Bilal lived in Flat File Gallery in Chicago constantly monitored by a webcam, and constantly threatened by a paintball gun that anyone via a website could fire at him. To fire a paintball gun from a website with your mouse is a similar experience as shooting in videogame, it’s only to click on the mouse.

The consequences are of course very different from a videogame. In this case you will be shooting at a man of flesh and blood not on a digital object, but still aware of this situation a lot of people were willing to shoot at Bilal. On the computerscreen the visitors could see a silent, black and white image from the surveillance camera with the rigged paintball gun, which meant that many important senses was lost in the communication between the gallery and the viewer. If the visitor had to go to the gallery, pick up the paintballgun and fire the gun when he stood eye to eye with his victim, he would probably have behaved differently and reflect on the situation.

As in the case with Eva and Franco Mattes performance Imponderables and Shoot the missing physic feelings and senses in the virtual world make us behave different when we experience a virtual performance compared with a real performance. 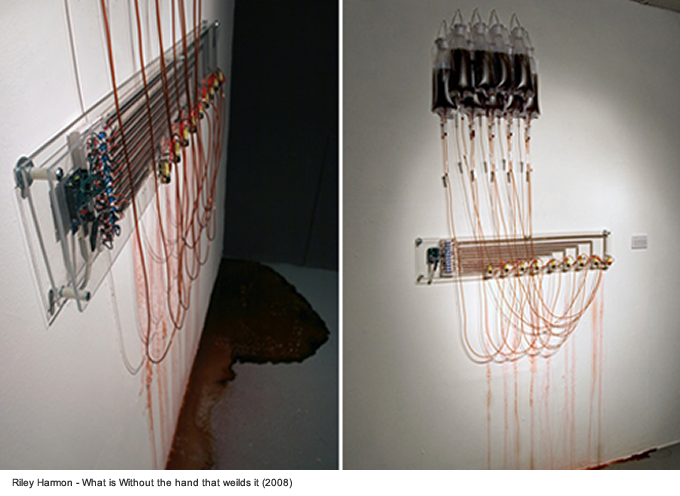 Virtual art is today very common, so the challenge is no longer to transform reality into virtuality, but to recreate the feelings and experience of reality that are missing in the virtual world. It will probably take some years before we can experience the science fiction dream of total immersion as in films as Matrix and surrogates. But artists as Tilman Reiffe believes that we someday can have a Startrek holodeck in our living room and play videogames as in “reality”, but until that happens we have to be satisfied to feel the pain in the game.