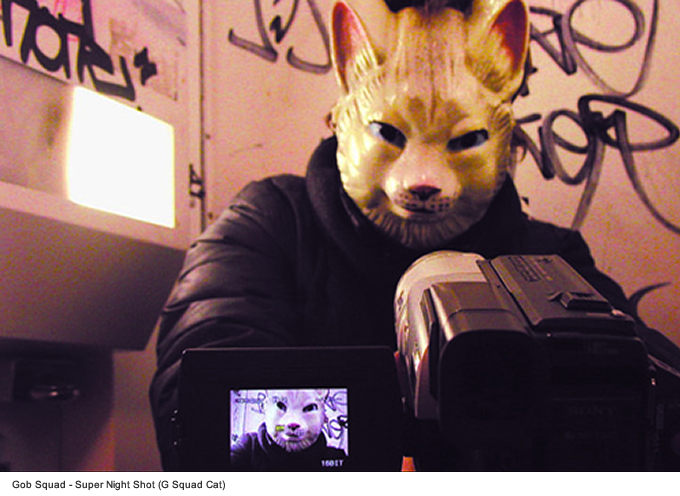 On their website, just after the welcome messages, it says: “Gob Squad make performances, videos, installations and weird happenings, mixing performance, theater, film and real life”. Apart from the huge variety of artistic practices mentioned, the focus rests immediately on the “weird”. The term, difficult to translate alludes to different meanings such as “strange”, “eccentric” or “curious”. Indeed, after having had the opportunity to take part in a work of the Anglo-German group, it becomes much easier to understand the reason for that adjective.

The project, born in 1994, divided between Nottingham and Berlin, makes video performance based on the relationship between individuals and the concept of collective event. In their work the line between reality and fiction is constantly undermined. What is part of the show and what it remains outside is not so easy to establish. There is, indeed, very clearly the feeling of disorientation space-time obtained by the superimposition of different dimensions: the performer dimension, the audience who sees the action on record, the audience unaware that in turn becomes part of the action and so on.

With simple aids such as video cameras and rudimentary costumes the Gob Squad are able to create forms and narrative structures of the most sophisticated Studios and at the same time, triggering a short circuit acts to deconstruct any kind of plot or story. It is also not underestimate the enormous importance that is given to the chance, the probability that the work itself is changed and the second unpredictable digressions. The influx of reality in practice is not only performative poetic intention, but rather an expression of a desire for life, a lively presence to assume charge of the real success of works such as immersive Super Night Shot. 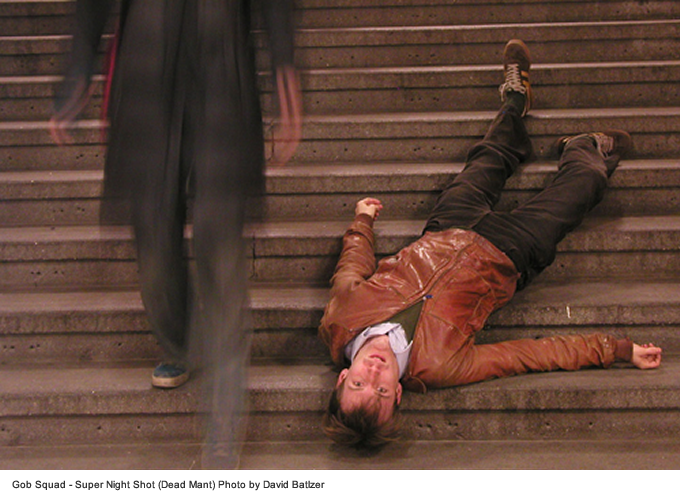 “Each of us is just one in a million, easy to replace and easy to forget in a city that doesn’t really need us. But don’t worry. We’re going to change all that. We’ve got a plan. This city will need us and this film will be our witness”. These are the premises with which the group introduced SNS –Super Night Shot without alienating experience of reality and fiction, strategy and chance, of “real” actors and unwitting extras.

The crowd outside the theater waiting for the arrival of the festive performer tired and satisfied for having fulfilled the mission. Once inside the secret is soon out: in the four screens that make up the scene is projected a film made with cameras on their shoulders. Strictly no cuts, absolutely uninterrupted flow images (almost) perfectly synchronized composing live action film with a typical Hollywood happy ending. As movies go on to become familiar environments and it is not uncommon suddenly made within the work.

That’s the work from which our reflection start, we have been able to “see” it at the last Festival Santarcangelo and that has fueled the desire to learn more. So we’ve put some questions to Simon Will, one of the founders of the group.

Claudio Musso:Performance, Video Art, live cinema, happening: it’s long list of categories that could be ascribed to the Gob Squad’s actions. How would you define the relationship between these artistic practices in your work?

Simon Will: When we make a piece of work, its not really helpful to think in categories of form. Rather we try to make a vessel which best contains all the things we might want to get from a project. We might bein a project with the desire for example to make something completely sensual, that attempts to confound the language that you would ordinarily use to recall or critique a piece of theatre for example.

Works like Say It Like You Mean It and King Kong Club for example would sit best under the practice of “happenings”, but at the very beginning of making something, we do not sit down and say…”this one is a happening”or, rather, “imagine it like this…”. In an expanded field of defenition, anything can happen. I think our work swims between all these defnitions and others too. However these forms that you list are important, and can be helpful in setting an expectation for an event. The expectations of a happening are different from a piece of video art for example. 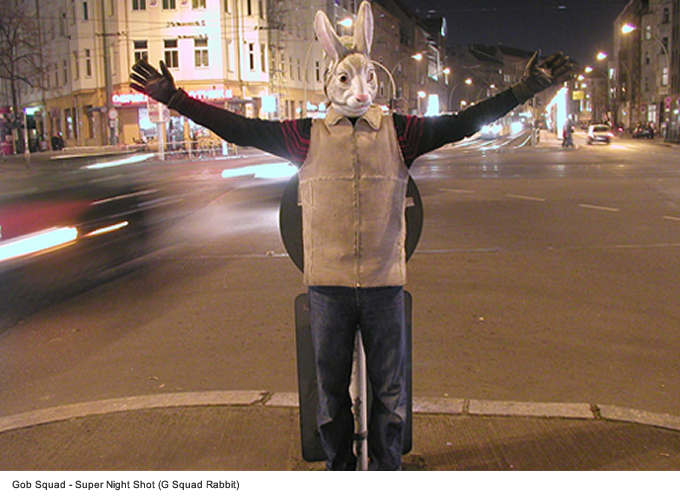 Claudio Musso: According with the main theories about the performing arts, they are defined as time-based practices. In your works, you have to deal with different time categories: real time, performative action time, time of the viewers’s perception and all of them are constantly in contact with each other. How they relate to each other? Is the opposition between synchrony and asynchrony an element that you seek?

Simon Will:I think that the element of video that is so frequently used in our work, confuses the “time based” defenition in a really great way. Super Night Shot for example is a four screen film that is made in real time, without cuts or edits, its a very “performative” aproach towards video in a way. And yet what the audience watches is a recorded event, recorded exactly one hour before the show itself. Video time, real-time – these concepts interchange with each other. We use sychrony and asynchrony alot in the structuring of our work. It helps to shape a piece, and allows for random elements to be framed. It also creates a great confusion between what is intended and planned and what is pure coincidence and real.

Claudio Musso: In your actions there is a particular attention to the chance process which creates an ambiguity between synchrony and improvisation. George Brecht, the Fluxus artist, in one of his texs speaks of “strict randomness”. Do you feel in line with this definition?

Simon Will: Yes, its often a mistake to think that improvisation and anarchy are just open to an “anything goes” methods of practice. The implementation of rules and rhythm allow “reality” (which is, lets face it, a very slippery and transitory thing) to somehow speak out. There are many ways to do this, but for us the framing of chance elements with rules and synchronicity is a method we have evolved within our collective practice. Perhaps there is a connection between collective work, which is often ensemble and “strict ranomness”.

How we work collectively is a whole universe in itself. We just produced a book about exactly this process. The structure of Gob Squad is completely non-heirachical: there are times when individuals take the lead on a process or a task, but work always feeds back into to a collective decision making process. 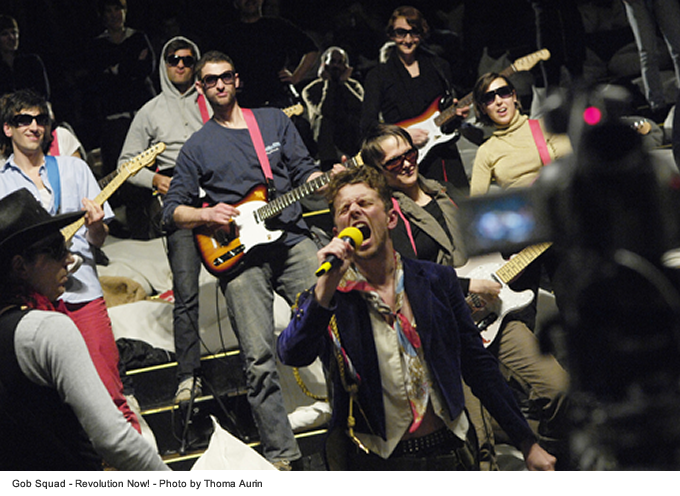 Claudio Musso: During the last SantArcangelo Festival I attended your Super Night Shot. I refer to it as a circular event, based on a continued involvement of the public attention even when it is not thought to be the focus of the work. Could provide a description of the work from your point of view?

Simon Will: I like that Super Night Shot is four points of view all running at the same time! Its a very nerve racking and exciting piece of work to do. Its an old work, made in 2003. It was really a process of discovery making it, at times we said: “its like a dance piece…but with cameras”. We were startled by many of its contradictions at how even though its a recorded event, it has a very strong feeling of liveness to it, at how it employs all the tricks of Hollywood and pulls them all apart but also sticke them all together again. So that it is possible to cry when the “lovers” kiss in the end. My point of view will go on till I die. Imagine if this interview did too…

Claudio Musso:I noticed that your primary tools are: digital cameras, watches, some costumes and a great ability to persuade. What is the role of the tecnical instrumentations? I mean: are the tools in a secondary position or are they fundamental part of the work? Why? And how important is rather to ensure the accession of the unwitting actors?

Simon Will: It’s an interesting question, because I guess its a chicken and egg situation (which came first?). The technical stuff really shapes what we do because it can often be one of the foundations of the work (but there are many foundations to a work). When we started to make Super Night Shot, one of the ideas that we had was purely a technical concept: four people with cameras on their heads, you see the world from THEIR perspective. 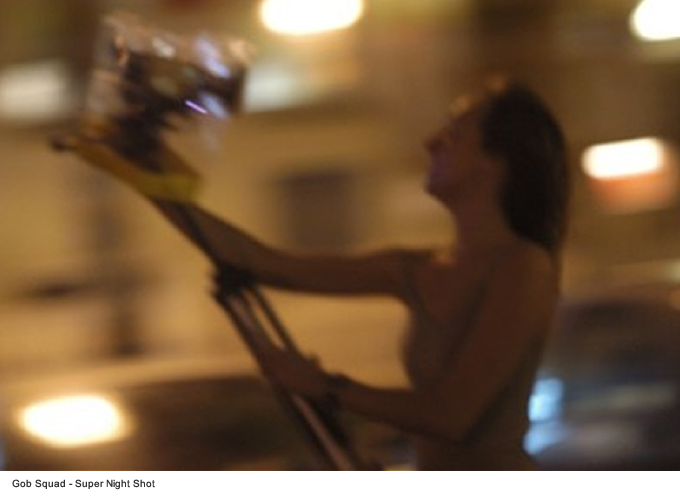 On one of the first days we simply took the cameras and went out altogether with them. We soon realized that the images, when played back altogether made you feel really sick! Like watching four shaky camera films all at the same time. So we then located ourselves into the pictures and added tripods.

In the end though, the technical apparatus always goes into second place. We don’t want to just say…hey, look what you can do with four cameras. The people on the street become performers, yes…lets think of it like this!