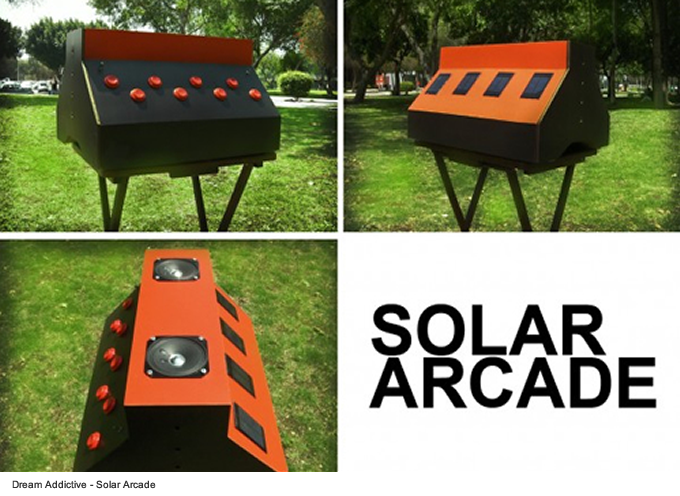 Dream Addictive is a collaborative project in the context of the relationship between art and technology, founded back in 2003 in Tijuana, Mexico by Carmen González and Leslie García, both with a solid background in the field of applied sciences, physical computing, visual programming and independent hardware production. These elements made them particularly sensitive to the development of artistic works in interaction design, highlighting the possible dialogue between the reality of the audience and the simulation provided by the machines.

In my opinion, their work is one of the most relevant in terms independent electronic arts in Mexico. The Dream Addictive practice is based on an extremely careful process that considers every aspect of the final outcome. Their projects have gained momentum in time specially in terms of the articulation of the technical and pedagogical with a striking clarity that makes very accessible in the way they produce without sacrificing elaborate conceptual implications. This aspect allows “spectators” to turn into dynamic collaborators of the whole process of design, interaction and interpretation of each work.

Sensitive to environmental issues of recycling and reusing of old technologies, all their works are realized under the Open Source phylosophy, following the principles for which the distribution and sharing of knowledge can be the driving force for the development of new significant projects in multiple directions. Also for this reason, they are active members of Upgrade International network, through which they organize meetings, concerts and exhibitions, teaching in workshops, professional training and labs, contributing to the dissemination of electronic culture in Mexico and beyond. 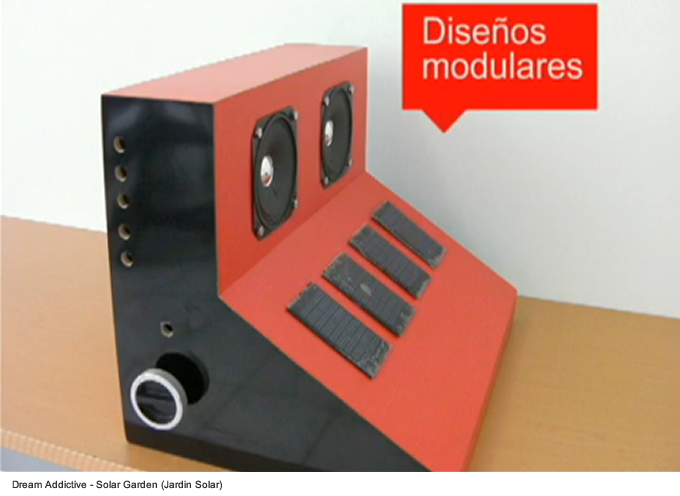 So we decided to interview the Dream Addictive duo, taking a cue from their latest beautiful project Jardin Solar (Solar Garden) which seems to be rapresentative of a path of growth and artistic maturity in accordance with the open and sustainable current issues and philosophies.

Felipe Zuniga: I would like you to give us a brief introduction to one of your latest projects Solar Garden.

Carmen González: Solar Garden is a research project on self-sustainable sculptures made for public space intervention. We have worked with these sculptures as musical instruments and as interaction interfaces. In relation to electronics, as developer artists, we were interested in having sustainable pieces to include recycling matters.

Leslie García: We also considered the useful life of the work. How long can a piece survive by itself without external intervention for its subsistence? Taking into consideration the context of classic, modern and contemporary art, for example, such as the case of painting which has a quality of endurance since it really does not need any maintenance to just “be.” In our case we wondered, what would happen if the electricity went out? The work would cease to exist as an experience. In this sense, sustainability relates to providing a longer usage life to the piece as well as making it more independent in terms of energy consumption.

All the pieces in Solar Garden have sound, some are purely electronic and the others include code. The main line of work is “open source” research by either recovering, modifying, or reinterpreting the existing code in order to make it available. At the same time, we explore sustainability matters, and finally we also carefully experiment with interface design. We both insist on the physical design of the piece because it is the way people relate to the work in physical space, and how this space is shared with the sound. 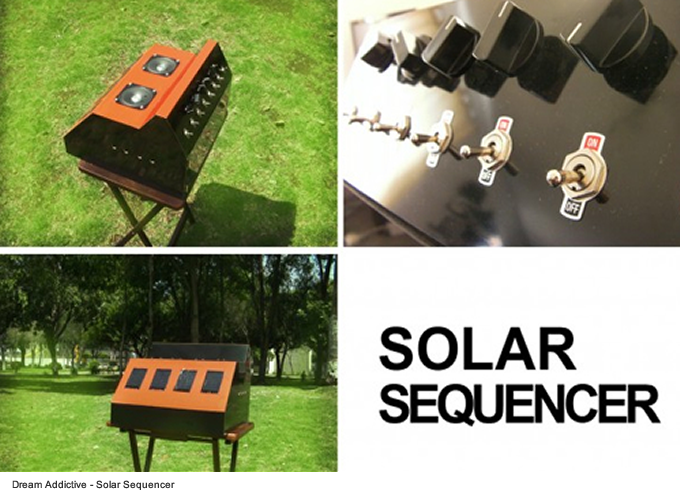 Felipe Zuniga: Could we talk about the role of the user/collaborator? How do the interfaces work in relation to the potential users in the physical space?

Carmen González:I think there are different types of users which relate to the different levels of each piece. For example, when we have collaborated with musicians they consider the pieces as musical instruments. Some people try to comprehend the electronic part, and then there are others who ignore everything about music and electronics.

So, people approach the pieces depending on their background and the information they have. I believe that everyone is impressed with the sound and physical interaction. That is why the interfaces are so important. Their shapes have a retro-futuristic and poetic intention. For me, there are no passive spectators, all of them interact with the artworks, and some understand their technical sense while others engage in with the aesthetic aspect . In the end, we deal with electronics as artists, not as engineers, aesthetics are important to us.

Leslie García:The Solar Garden design celebrates the development of the first electronic instrument, the Theremin. Also, the emergence of mass produced electronic instruments such as synthesizers and sequencers. The idea was to use these references but transferred to digital technology. We were interested in creating a sense of shock: pieces are not an exact reference to a high-tech instrument, but instead have a vintage look, like an image that inhabits people´s memory.

That is the reason behind the work’s form and its playful look. When you see these boxes in the middle of the park or in a gallery, it shocks you. I wonder what people ask them selves? Where have I seen something like this? It could have been a toy from the past or an instrument from the future. What people really don`t think at first is that these are interactive sculptures. 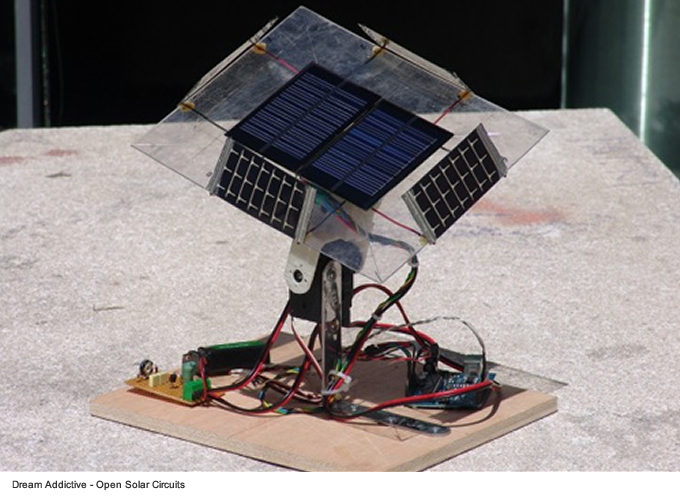 Felipe Zuniga: I think it is interesting to consider these pieces as open-ended objects, that can be distributed and expanded through the addition of information, energy shifts, and interactivity. In this sense their form is the result of research which is open to collaboration. Also, the pieces generate their own spatial and temporal field which occurs in the user/spectator`s time and space. Could you talk about the “soundscapes,” or sound environments, and their relation with public spaces?

Carmen González:I’m particularly interested in the key role that patience plays in interactivity. When you are working with solar energy you have to decide the way the interaction will take place because you are working with energy in “real time”. In this sense, there are people that want an immediate response; they want everything to function and operate in a certain way at any time of the day or night.

I want these pieces to be day pieces, since the work with the energy cells and with the electrons basically defines the whole interaction. Without energy either electric or solar, there is no interaction. For example, the Theremin has its own life, a little Shinto like, as if it was a spirit. During the day, it starts playing at a certain hour, like its waking hour. That is the way that I see it, because it is the way its internal energy is working.

Leslie García: Solar Garden only occurs in a determined time of day when there is a certain amount of energy to sustain it. It can also recycle energy set aside by the lights and spots used to light up the pieces in a gallery. At that moment, the piece is carrying out a recycling work. Going back to the sound landscape generated by the pieces, we are using a sound with a very low profile, almost as low as Game Boy: 8 bits.

The sound physically occurs through vibration, in this case through a micro controller generating on/off pulses. It is essential for us to make visible the sound capacity which occurs directly on a chip by electron transduction, which is becoming energy. When all the pieces sound at the same time, they create a room-filling field, either because people are using the pieces to create some kind of harmony or simply because they are playing with them. It is really an agreement, because the piece is actually what you want to do with it. 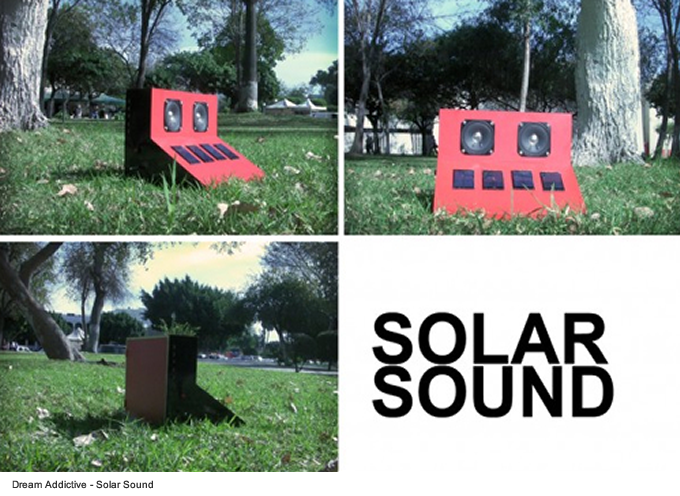 Felipe Zuniga: In this sense, I see that the Theremins are a lot more self-sufficient on one hand, while on the other hand the sequencers require interaction. They also have the obvious reference to the switch and the start button. I am very amused by this Pop aesthetics. I mean that as members of a certain generation, we are so familiar with these switches that they are now part of our collective unconscious. Nowadays the digital age is ruled by sliding gestures on pads and odd sensory interactions. For me this use of switches is like a small tribute to the on/off era. I would like to know a bit more about this universe of subtle decisions.

Leslie García: The switch requires interaction. This had to do with the process of generating Solar Garden. Making a solar Theremin was a must for us, because there are all kinds of Theremins-optical, infrared, capacitive, etc. Using the famous Reed Ghazala “circuit bending” we thought, “Let’s do a solar Theremin ! It is necessary to develop one for complement.”

But starting from that, analyzing the transparent structure this design has, I decided to make the pieces stronger, more imposing in space, in order for it to say to the user: “Come and interact with me!” The topic allowed this exploration. The sound is a series of on/off and seriously, what do modern sensors do? They work in an on/off direction but transducing proximity, temperature, power, etc. For this, we chose the most basic aesthetics and interaction and that is basically an on/off.

Carmen González: Obviously, this on/off interaction implies a certain awarness of the technical part and the historical referents as well. And the actual artworks are more “pop” because of their colors and forms. We feed on this background and work with the history of electronic art. We do the research and integrate the “open source,” the historical context, the technical context, and have all of them reflected on the pieces together.

Leslie García: Exactly, it is also a matter of continuity in our work, in order to reach Solar Garden you have to go back to the Generative audio prototypes and the Open Source Orchestra. It is a matter of process. In this case, we wanted the energy to be the center of attention taking the solar cells as main actors of the piece in itself. The entire construction of the model is based on providing the largest possible amount of energy, and precisely the constructivist reference in the design in some way were the ones that served better for this purpose. But, if you look back in our work, there are pieces that are more focused on the sensors or the interaction. The form of the pieces in themselves are like a command: Stop right here! they say. We play with that reference and allow that contrast to make the interface more eloquent. 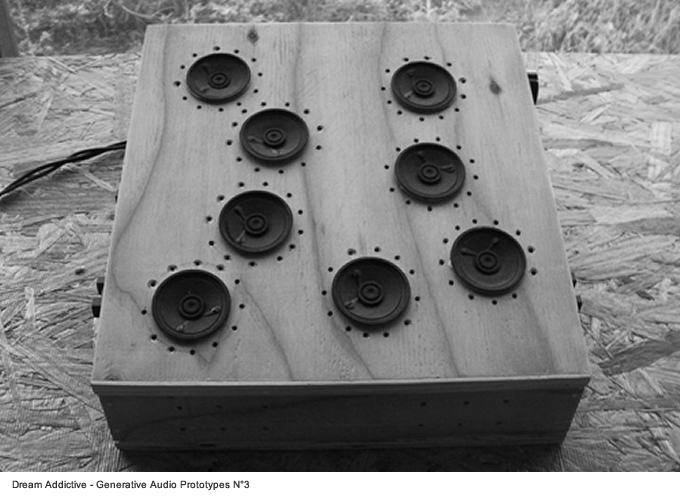 Felipe Zuniga: Could you tell us a bit about the places where it has been shown and the interaction with the users as well as your proposal for the next venue?

Leslie García: We have done sporadic interventions in public spaces. The obvious response people have of our work is “What is this?” People reach out, see them, and start asking questions: “Are they solar cells? What are the pieces doing? How does it work?” The first formal presentation for the piece will be at the satellite space opened by the Museum of Latin American Art, in Long Beach, called The Collaborative in the exhibition titled Descartes.

The curator, Idurre Alonso proposed a show around work produced in Tijuana and Los Angeles, which in a way uses the topic of waste to generate pieces. In this sense, Solar Garden participates in this exhibition because the pieces live from the wasted energy which is recycled to make it happen. Besides, the design and the structures are really made from recycled material, discarded material which has an almost pop aesthetic status precisely for the meticulous treatment given to the piece: electronic, functional, interactive, and three-dimensional. The exhibition will be on view from September 18, 2010 to January 30, 2011.