Back To The Square. Shinji Murakami And Neoarcadism 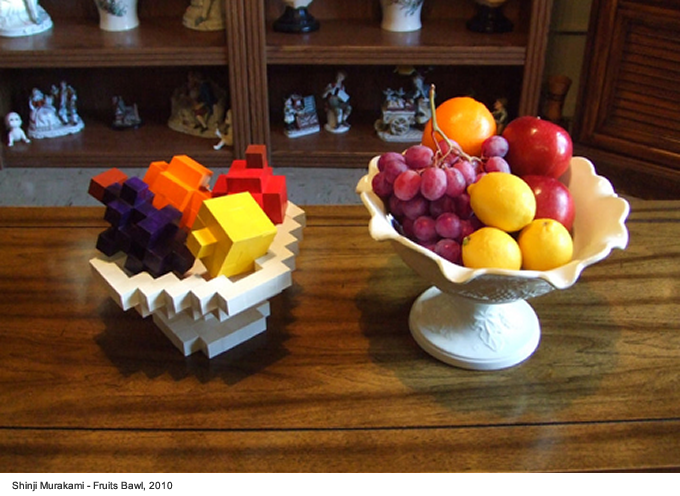 When the video game industry in USA crashed in 1983 it was the beginning of the golden age for the Japanese videogames with companies as Nintendo and Sega. Top stars game designer as Shigeru Miyamoto, created during this period legendary videogames as Super Mario, Donkey Kong and The Legend of Zelda.

The RGP genre took a big jump when Hironobu Sakaguchi presented the successful RPG series Final Fantasy in 1987. With such a historical background you would think that Japan, as USA and Europe, have a strong tradition with contemporary artists inspired by videogames and that you would find regular exhibitions with Game Art in the country. After all Japan is the promised land of popular culture. But surprisingly it is very quiet from the Japanese Game Art scene. An exception is the Japanese artist Shinji Murakami, who was born in 1980 in Osaka and grew up, as he self describes it on a healthy diet of 8-bit computer games, with The Legend of Zelda as a favourite.

Currently there is a strong retro-trend and interest in the old 8-bit graphics from people working with arts. It is not only in the art world you can find this trend. In music there is a large stage for chip music by composers as Nullsleep, Bitshifter and Goto80 and on the indie gamescene 8-bit style games is very common with famous game creators as Cactus, Mark Essen and Jason Rohrer. You can also find a lot of examples in design where designers borrow elements from old arcade games and characters. An explanation to this retro-trend is that the computer generation or the pixel generation has grown up and is looking back to its childhood graphical worlds and aesthetics for inspiration. 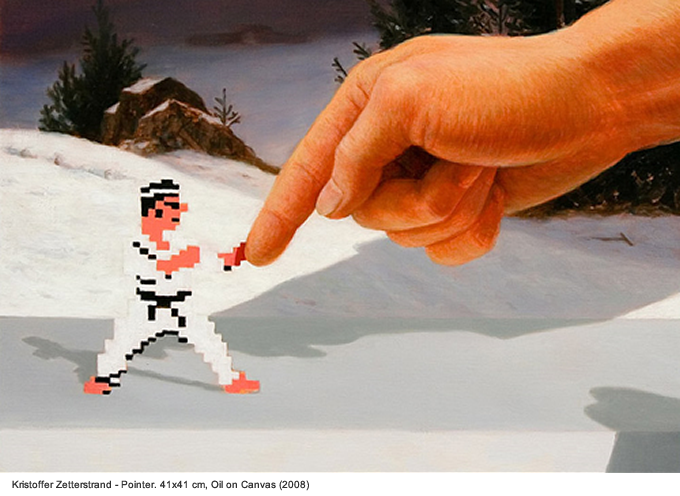 In the art field you can find many artists who in various ways are inspired by the classic 8-bit videogames aesthetic. There are so many different examples that I would dare to call it an own art style, and I would call it Neoarcadism. What is then characteristic for Neoarcadism? Its art inspired by 8-bits graphics, which tries to emulate this ancient graphic expression, both in digital and analogue art objects.

The objects are often build with help of squares in different colours making the picture look edgy as graphic with low resolution. Neoarcadism can be seen as a reaction to today’s computer graphics, which tries to be hyper-realistic and imitate reality as much as possible. You can find a parallel in the history of art. When photograph was introduced in the 1800s, there was suddenly a new medium that could portray reality accurately, and the artist found it difficult to compete with photography’s detailed realism in portraits and landscape paintings. Instead they began to explore alternative ways of describing reality, which in time resulted in various isms as surrealism, cubism, futurism, naivism etc.

n the same way neoarcadism could be seen as a reaction of today’s super-realism in graphics, but also as a nostalgic approach and investigation of the beginning of videogames. Another important part of Neoarcadism is the close relationship to handicraft. These artists are often interested in traditional art forms as mosaics, sculptures, paintings, or in the case of Murakami stamps on wooden blocks or silkscscreen print. The use motif and inspiration from videogames but transfers the digital image to traditional art objects where you can find trace of the artists hand.

The French street artist Space Invader is a good example; he works with mosaics of famous 8-bit characters from games like Space Invaders and Pac-Man. These handmade mosaics are placed around the world in different cities. In recent time, he has also started to build sculptures with the help of Rubik’s cubes. Each cube could be used as 3×3 pixel grid with 6 different colours. He calls these sculptures for Rubik-Cubism.

Other examples are the Swedish artist Kristoffer Zetterstrand who is trained as a traditional painter and creates paintings with a mash up of reference to art history and classic arcade games and in the process he tries to emulate the typical 8-bit feel in his paintings. Zetterstrand has also made several public mosaics where he makes pictures inspired by arcade game. Mosaic or similar materials are popular in neoarcadism with artist as Norbert Bayer aka Mr.Ministeck, Benjamin Teck, and Arno Coenen for example. Mosaic reminds a lot of how 8-bit graphics was created in the beginning. You made bitmap graphic where you added square to square in different colours to create sprites, objects, landscape and characters. 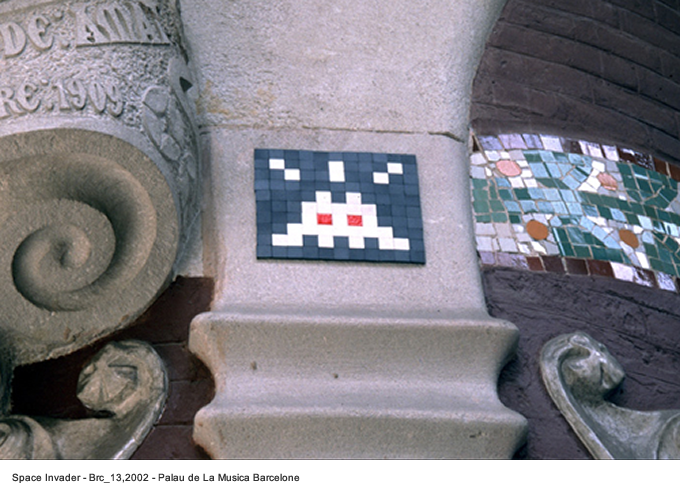 We talked about these issues with Shinji Murakami

Mathias Jansson: On you homepage you say that you was “raised on a healthy diet of classic 8-bit video games”. What are so fascinating with 8-bit graphic and what kind of games inspires you?

Shinji Murakami: I love the simple expressions, and minimalism in the games. Other important thing is the nostalgia, because I was crazy about Nintendo (NES and Super NES) when I was a kid. I think it’s amazing that Nintendo’s famous 8-bit characters could express so much with only 16×16 pixels! And how they created these very large worlds with recycling limited materials in each game is also fascinating. The kind of game that inspires me most is role-playing game and side-view action game, especially role-playing game like the first Zelda.

Mathias Jansson:You started as a street artist and used to tag cities with your 8-bit characters Boco and Kid Snz. Can you tell me something about these characters?

Shinji Murakami: Yes, I started as a street artist, by putting stones in the streets which I painted and tagged. I couldn’t tag on the walls at first, because I was very afraid of being arrested. I don’t like the writers who tag the names that sound like English, I mean most Japanese can’t speak English well.  A also felt a sense of incongruity in working with the European or American style. So I began tagging the image of the sword and the shield, those images are inspired from stereotype items of RPG. Next I drew a lot of characters to find my favourites ones as my new tags. A girl friend of mine chooses a special one from those characters. I obeyed her choice, because I believe in the intuition of the girl, because the character “Kawaii” (means cute in Japanese). That’s the original Boco. Boco’s concept is a simple drawing which looks likes a kid’s drawing. It means kid’s drawing with a minimum expression of drawing like 8-bit graphic is a minimum of a bitmap image. And I think that Kid Snz expresses most of minimum bitmap graphic by only 9×7 pixels. 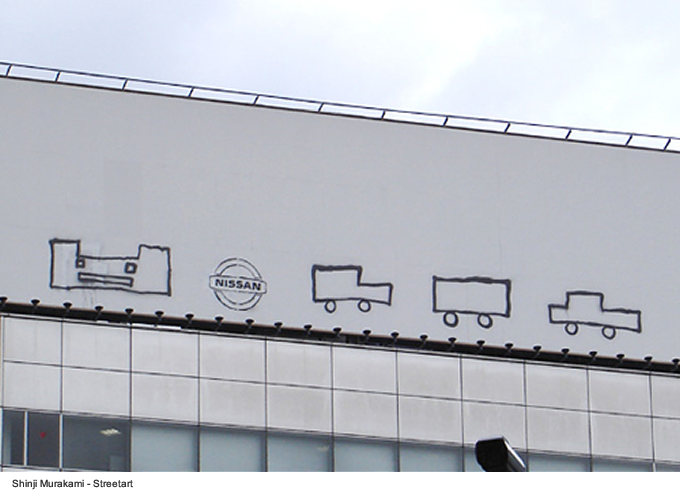 Mathias Jansson: What do you think about street art as an illegal act?

Shinji Murakami: My opinion about street art is contradiction. Did you see my street work that bombed the billboard? I put the logo of NIKE or NISSAN on the same place with my drawing. In this case, I tried an experiment that people will recognize those billboards show true advertisement by putting a logo. One more thing, though it is an illegal act, but some gallery owners such as Jeffrey Deitch very like it, and a market is formed. I just think that the scenery on the street is going to be unimaginative if street art disappears.

Mathias Jansson: In a series called RPG you have worked with maps, for example you have created a map over Central Park in New York in Final Quest 1 style? Can you tell me how this RGP maps are created and why you choose to work with a style that reminisces about an old Japanese art style which uses stamps on wooden panel?

Shinji Murakami:“If I made a tree icon and put a lot of them next to each other, I’d be able to make a forest map!” This was the little light bulb of an idea that started my map artwork in 2003. I put my original stamps with images of “Map data” and “Item data” on the wood panel which had a white painted background. The “Character data” I draw with a marker. I used to make only small works, because the rooms are small in Japan. So the stamp was matched for the method to repeat the image for that size. The surface of the canvas had small irregularities, so I use the wood panel that is more flat than canvas. I am not conscious that my work could remind of a particularly Japanese old style. In fact, after I moved to New York, I used silk-screening to make bigger sizes.

Mathias Jansson: In your latest work you have started to explore 3D-8bit? What was it that made you go from 2D to 3D?

Shinji Murakami: Yes, I am trying to explore the art of 3D-8bit. In Japan in 2005, there was a joint marketing campaign between Pepsi and Nintendo gaining recognition for its production of a 3D-8bit version of Super Mario Bros. Japan has a big Otaku culture today, so a lot of new figures (it means like a toy doll) are always released, but this product excited me and was very inspiring. I always want to discover new styles, and I was interested in making a sculpture in a new style. As an artist that has continued to utilize 8-bit games as a motif in his artwork, I felt compelled to create my own 3D-8bit artwork, and in 2009, I completed Fruits Bowl. 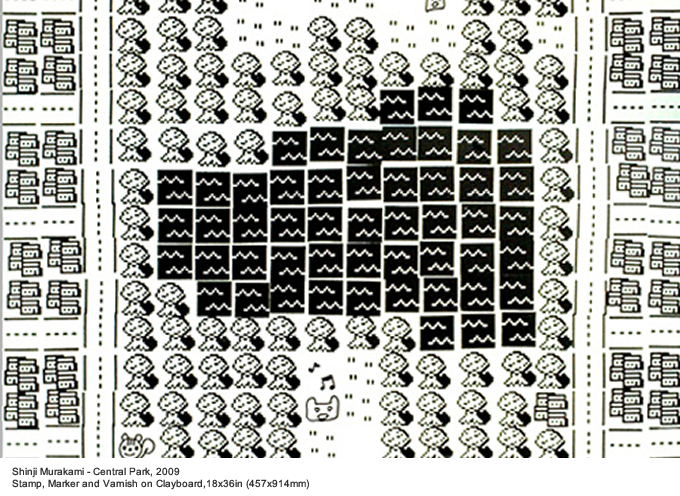 Mathias Jansson: Can you tell me some about the Japanese Game Art scene? Are the many contemporary artists inspired by videogames in Japan today? And are there any interest from art museum and galleries to show this kind of art?

Shinji Murakami: First there is a necessary thing to explain, unfortunately there is almost no market for contemporary art in Japan today, and there is almost no culture of purchasing art. It is a big reason that I moved to New York. In fact, people in Japan don’t understand why the Japanese artist Takashi Murakami is famous in the world, and they are not curious about it. There are a lot of art museums and galleries in Japan, but it seems to be a place for the elderly to entertain themselves. Some galleries collect money from artists to loan their space. Do you think that is attractive art scene with such a situation?  Do you believe that there are any critics who have an advanced review? I don’t think so. There are a lot of artists who use motif from Manga or Anime in the tradition of Takashi Murakami, but it is rare with video game artist. There is my prejudice to some extent, but I mean the answer to this question is almost: No!