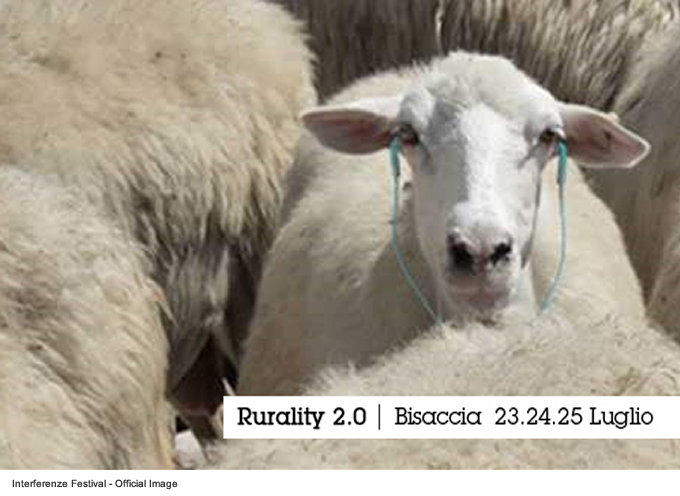 The Interferenze Festival which came to its fifth edition, has become during the years a laboratory where the rural territory and its features (identity, traditions and landscapes) are analyzed through contemporary expressive forms and languages and aesthetics of the new media become new forms of sharing.

Leandro Pisano, the Festival’s artistic director said: “Our aim is to orient cultural productions and spread the awareness as regards the potentiality of the rural territory”. In other words, the territory is no more a geographic place or a branding system, but rather a space integrated in the media system, a medium itself: through the event or its mediatic representation a relationship is created which deletes the distance between issuer and receiver.

As regards the curatorial part, the festival focused on a very precise point: the rural territory interpreted not as a product, but as a (new) mean to communicate and get in contact in a creative way, by experimenting unexpected relationships through processes, strategies and results of communication itself. Pisano continued: “Our idea is that the next editions of Interferenze festival can become an open meeting. We are thinking about asking the artists not only to simply create or install their works, but above all to get in real contact with the territory in order to obtain something in terms of values and traditions, and therefore by making their personal interpretation hybrid through different points of view and cultures”.

This atmosphere of cooperation is surely one of the strength of this year Bisaccia festival which isn’t a series of sets, but rather a koinè of lovers and experts coming from all over South Italy and elsewhere. 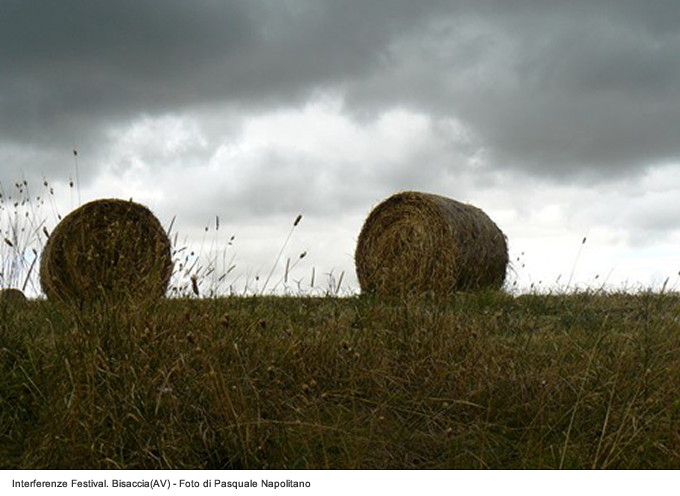 The electronic culture is something elusive, because it bases its own existence on a medium rather than on esthetical keys. Moreover this heterogeneity became even deeper, due to the proliferation of electronic festivals which, from the one side contributed to diffuse an expressive contemporary grammar, but on the other side have often created some generalist containers. Therefore Interferenze presents itself as a necessary operation in this field, since it shows the capacity of addressing this experimentation toward a direction we could define “militant”, from the point of view of re-discovery and valorisation of rural territory: by exploring the territories of electronic expression, it discovers the unexpected and original relationships with the natural environment, as well as the food and the traditional culture.

This year, Interferenze offered from the 23rd to the 25th July at the Castello Ducale in Bisaccia (Av) an unusual narration of the natural environment. The chosen theme was “Rurality 2.0”, a new way of relate to the rurality by starting from the territory but looking beyond it. Using again Pisano’s words: “The rural territory as a (new) medium to re-design and read the environment through an open and unedited perception of cultural, aesthetic and social spaces belonging to border areas”. The town of Bisaccia, land of metaphysical, windy and endless landscapes, is therefore at the same time topic and container, representation and context.

This territory is very rich of interesting elements as regards nature, landscape, history and the wine-gastronomic field. It is a crossway between three regions: Campania, Puglia and Basilicata. It is anyway a cold and quite remote place, inhabited at least three days and three nights by a happy community, that literally “lived it”: Interferenze in fact has been not only a festival of electronic music, but above all a kind of general state in terms of experimentation and research around electronic arts, new media, audio/video and software art, as well as all those fields situated among these categories.

An example was the sound installation of Bianco-Valente from Naples, aiming at making the sound of wind visible, by mapping the data from the wind plants installed on the high Irpinia territory. Another example was the very successful work of the Portuguese Andrè Goncalves, titled The Bird Watcher, in which, thanks to a particular crib between electronic and craftsmanship, the artist is able to sample and process the sounds from the bird fauna animating the valley. 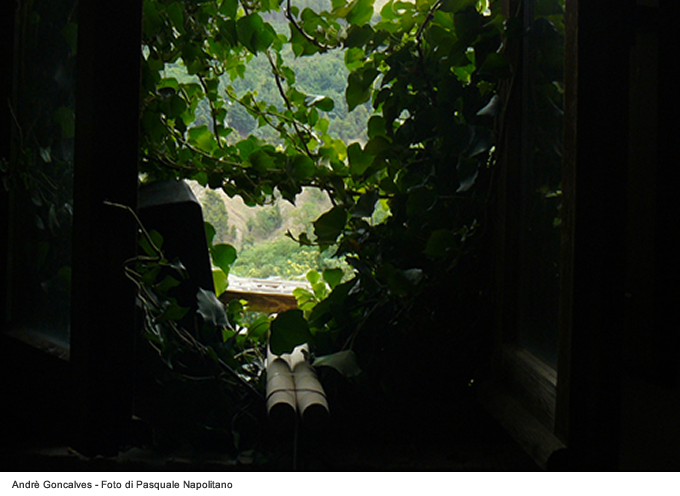 Moreover, the section Click n’Food, offered a series of performances on the basis of the relationship between food, sounds and new media arts. Local traditions, such as the transhumance of podolic cows in the Appennini of South Italy, have been analyzed during some residential projects. The projects constantly look for connections between elements belonging to technology, tradition and rural landscape, and try to offer an unusual interpretation of natural environment. The festival is maybe able to insert in the experimentation scenario applied to the territory a unique segment, in which the food, its preparation, the raw material at the basis of electronic experimentation, with the aim of offering a virtuous circle where food is strictly linked to sustainability, environmental quality and social relations.

This is a relationship based on what Irpinia can generously offer: wine, cheese and other typical product of the territory, which at the moment of their preparation become natural instruments of sound production, in order to give a different way of interpretation. In the performance Noble Milk, Yasuhiro Morinaga and Antonello Carbone presented a revival through sounds and images of a field trip in the high mountains among pasturages. The work was produced on the Irpinia mounts during the days before the festival and was performed together with the tasting of Latte Nobile (Nobile milk) produced by cows feed with forage and pasturage of the territory.

In Foodjob: frequencies to dissolve under the tongue the sound-artist Enrico Ascoli and chef Pompeo Limongiello proposed an performance articulated on different sensitive levels and centred on the real time recording with panoramic and piezoelectrical microphones of soundings captured during the preparation of food. It was a particularly successful performance, able to sinestetically “increase” the degree of involvement as regards procedures of high kitchen manual skill.

Lastly Viand was the revival through the filter of medial aesthetics of a craftsmanship linked to the dairy production, presented by the performance of field recordings created by the US artist Lissom. 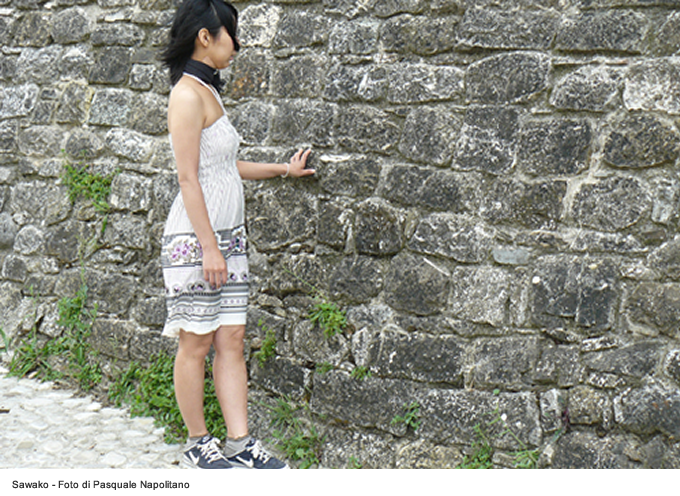 Moreover the festival could add many panels and talks, coordinated by Vito Campanelli from the Università Orientale in Naples. Among the meetings of highest interest there are: GreenWeb. New media e nuovi turismi nella natura, in which Daniele Pitteri’s report aims at illustrating: “A passion tourism, therefore individual and collective/community at the same time, because passions are to be possessed but above all shared. Within this transformation, the rurality occupies a very wide portion, since it became one of the main assets on which the new contemporary tourisms and technologies play a key role to support and give meaning to these trends”.

Be Wind was instead the meeting held by the Japanese sound-artist Sawako, who proposed herself like a soundwalk through the wind rigidity which strikes the high Irpinia within a hearing and storing experience. The result is a particularly successful performance with particularly “eastern style” lightness and ephemeral sense.

Again the presentation of Mediaterre.tv, the first TV linked with web and totally focused on contents coming from rural areas of South Italy. Design o’ the times, curated by Gianpaolo D’Amico and Sara Lenzi (animators of soundesign.info, one of the most important meditation space in the Italian scenario) featuring Luigi Mastandrea was the creation of a performance organized like a group conversation, similar to a round table in which the intervention times (intended as speeches, productions and emissions of sounds, readings and so on) of guests have be structured by using temporal parameters of musical composition: duration, frequency, succession and overlapping.

Particularly relevant from the analytic point of view was “La prossimità del lontano: lo spazio topologico delle reti oltre le città”, the speech by Tiziana Terranova: ““It is the study of a net space which assumed the features of a real new science, which understands such spatiality in fundamentally topologic terms. The topology indicates that space isn’t formed by fixed distances, but it is rather a deformable principle, by allowing the approach of geographically remote places”. The intervention dealt with the definition of some hints as regards the implications of this topologic space, where points unite and divide on the basis of technical connections. 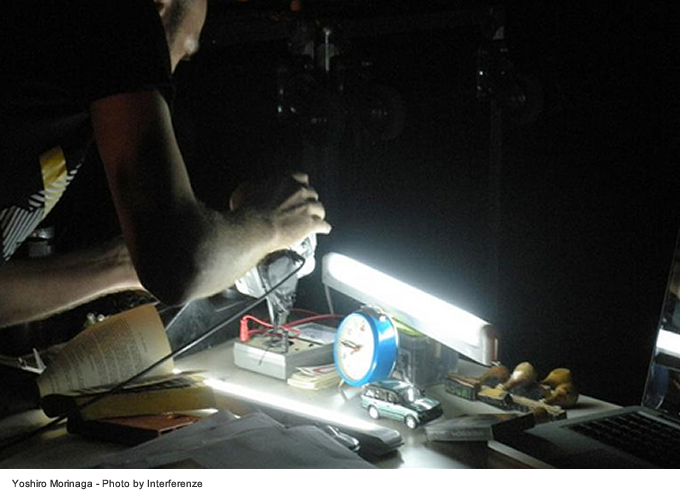 This edition of Interferenze was also characterized by the bridge between Italy and Japan, based on the project Interferenze Seeds Tokyo, which saw the meeting between Leandro Pisano, Yukiko Shikata, specially-assigned professor at the Tokyo Zokei University and the curator of new-media art Masu Masuyama about the topic “Rurality between Italy and Japan”. Using Shikata’s words: “In the second decade of the 21st Century, the expressions of arts linked to media and sounds and assisted by the creative use of everyday technologies are spreading in the public sphere and artists, creative people and programmers are researching these new connections, not only in the urban field but also in the rural one. Interferenze, in South Italy is one of the clearest examples of the research on new cultural, social and economic values, which connect experimentation and tradition, analogical and digital, local and global”.

These are seeds which germinated at the presence of many works by Japanese artists in the evening and afternoon screenings (this section was curated by Valentina Tanni) and in the Japanese Festival preview “Interferenze Seeds Tokyo 2010”, the Japanese interpretation of the Irpinia festival, which took place in Tokyo on the 26 and 27 June.

As regards the musical aspect itself we must underline the absolute quality of rosters and performances and the fascinating framework where they took place.

Among the most significant ones, there are certainly that of the Touch Greek musicians, Novi_Sad, which stroke for the sound compactness originated from a real time field recording action, able to generate at the same time a suggestive and explicative video and a performance. By increasing the level, we find the heavenly connection between electronic and drumming proposed by Simon Scott (already legendary drummer of the Slodive) and the impeccable set by the co-founder of the Raster Noton Byetone, former Olaf Bender, who presents a set with a full minimal-rationalist aesthetic Raster-Noton, however crimped by unimagined and dance-oriented dark veins. As remarkable are the magmatic and menacing dub-step by Sam Shackleton, the moody ambient of The Sign Below, the field recording of the already cited Sawako and Lissom. 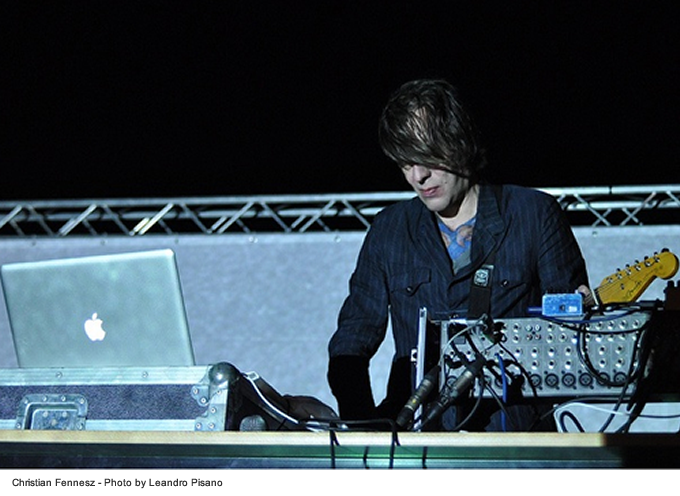 The closing event was committed to Cristian Fennesz, who is always in line with his very high standards, as well as dreamy and languid, maybe a little bit apathetic: in fact the Austrian master estranges himself from the sympathies of the most productive people in a skimpy set during no more than thirty minutes.

Generally speaking this festival was quite successful. It was a challenge that has been won as regards self-production and independence from institutions, aiming at disengage oneself from clientage and focusing on quality.