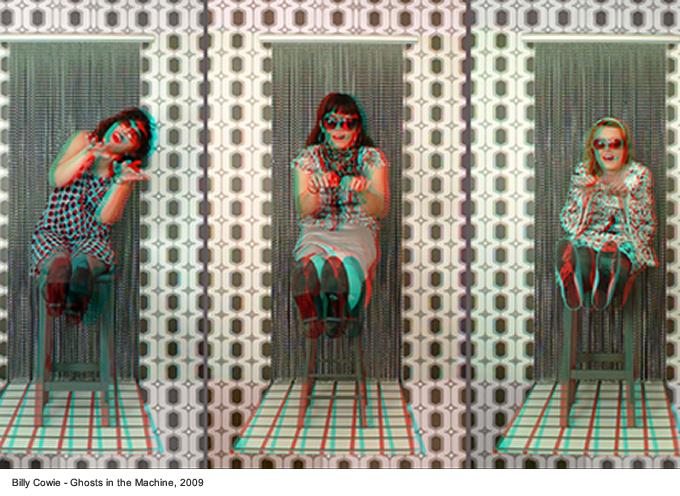 “I am the ground, I am the earth, I am the soil, and into me your coldness stole, till I am solid and brittle” (In The Flesh – 2007 Billy Cowie)

The fourth edition of Teatro a Corte International Festival, which toke place in Turin and in eight Savoy residences in Piedmont from July 8 until the 25th, presented a wide selection of contemporary and experimental productions in the fields of theatre, dance, nouveau cirque, video-dance and performance, hosting 31 groups from eight different nations. The event schedule comprehended 38 shows, 5 site specific projects and two creations commissioned for the Festival.

Within such kaleidoscope of spectacles, some of the works explored the encounter between video, dance, and the 3D stereoscopic dimension. A brilliant example was Billy Cowie artistic research, who presented, in his Italian première at Teatro a Corte,two tridimensional installations: The Revery Alone which was showed in Rivoli Castle’s Museum Hall, and Ghosts in the Machine, presented at the Cavallerizza Reale in Turin.

Scottish artist Billy Cowie is a composer, choreographer and filmmaker. Now based in Brighton, where he teaches at university, Cowie is the author of many choreographies for live performances, dance and video installations, films and stereoscopic installations in which he makes use of 3D technology. In the book “Anarchic Dance”, curated in 2006, we can find some analysis and critic essays about the works that Cowie and dancer/performer Liz Aggiss produced in the past years. 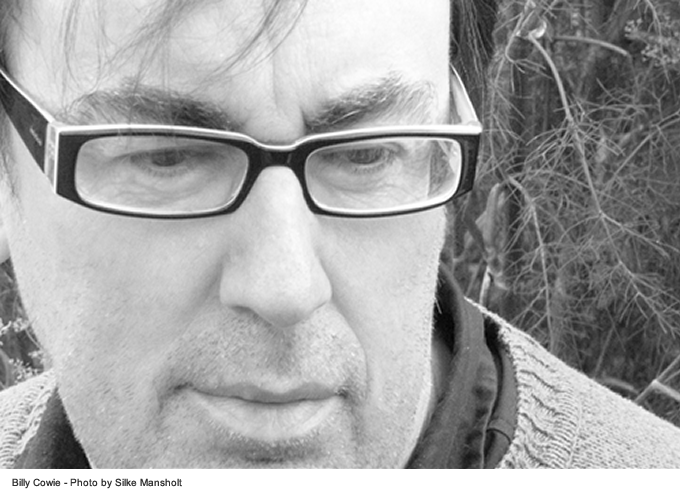 The choreography elaborated by Cowie in collaboration with Agiss for David Anderson’s video Motion Control, presented during Invideo Festival 2002 edition in Milan, is a great example of the Scottish artist’s amazing skills. Similarly, the 3D work from 2007, In the Flesh, is a sensual and involving tridimensional video installation where one can get struk by the sensation of feeling the dancer’s body and of wanting to be a part of her dance.  Cowie always creates the soundtracks for his works by himself and this case makes no exception; it inspires subtle, dewy emotions, which are worth it to be re-listened more than once.

Roots and developments of Billy Cowie greatest works, collaborations and favorite themes on which the artist is constantly working, arose in an indeed very pleasant interview held during the Teatro a Corte Festival.

Silvia Scaravaggi: Seeing Ghosts in the Machine, your latest work presented at the Cavallerizza Reale, I could notice that it is very different from the previous ones, and not only for the use of 3D technology. Do you often change themes and subjects in your works?

Billy Cowie: I like to create different works, to not repeat. With you I would walk a few steps of my productions, chronologically, starting from the beginning: I started making pieces for dance companies, live, with six dancers. After a while I started making videos. When I watched the movies they seemed flat to me, without depth, without size. This is why I started to produce 3D installations. Another motivation came to me from the dance: watching the dancers you see that they are really distant from the viewer. The dancer and his movements are best seen when viewed from very close. What is desirable is that they are so close that they can almost be touched. This option approach is what interested me more than the movie. I really wanted to make people feel “near” to what they saw.

The first work I made in 3d was Men in the Wall (2004), a video 3D installation for four screens. There are four men of four different nationalities, an American, an Indian, a Spanish and a German, who are within four windows and dance and speak for about 25 minutes. Someone asked me why I chose only men: because I wanted to give a picture of four people quiet, without creating other references or connections, as would it happen if instead I had chosen two men and two women. I wanted to make the situation relaxed and without references. 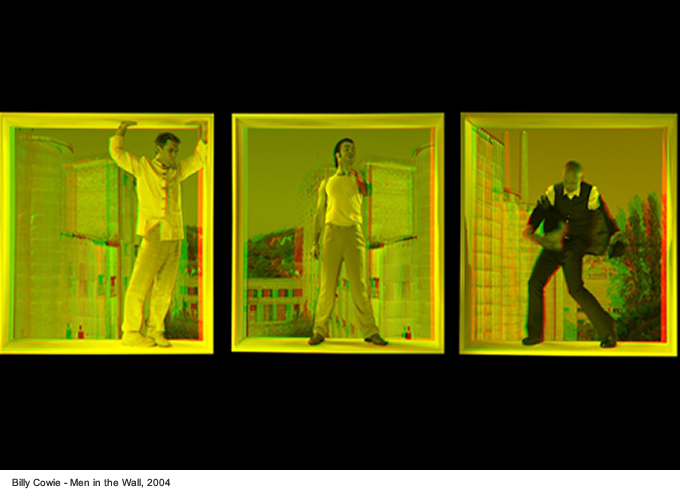 Silvia Scaravaggi: Was your main interest in this work to make the image looking real, more than how video can be?

Billy Cowie: Exactly, I wanted to make the image more solid, tangible. Moreover, the multi vision made available by the four windows, gives the possibility to move the eyes freely in order to choose where and who to watch. I like to be free to roam, to wander while looking. I exposed many times this work and I finally got the solidity I was looking for, even if the characters were not really in space with the viewer. The three-dimensional vision is complex: it seems that everything happens at the very end and then something happens at very closely, something obvious to our eyes.

I wanted to create pieces in which the dancers come towards the audience, so I made Ghosts in the Machine, the work presented in Turin. A sort of “twin” piece of Men in the Wall, but with three girls. Before I realized it, I needed to experiment, to understand how to do it. A three-dimensional work with three screens is very complex, from a technical point of view. So, while experimenting, In the Flesh was born: a test where I wanted to ensure that the dancer was so close that you really had the desire to touch her 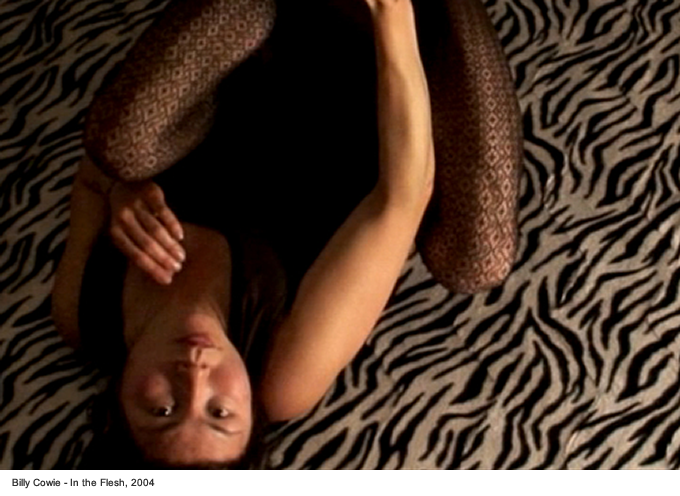 Silvia Scaravaggi: Well, you surely did achieve that. In the Flesh (2007) is a quasi-erotic work; watching, or better yet feeling it, one experiences the desire to touch the dancer’s body and to follow her movements. Also, all this being enhanced by the soundtrack..

Billy Cowie: Yes, the piece seems to work. In The Flesh is a 3D video installation, for a dark and cozy ambience, made for an audience of four or five people at once. In Amsterdam, I was asked to show it at Paradiso, a large room built in a former church, with a wide central aisle. I considered it a sort of experiment and I agreed. A little strange thing is that the body of the dancer, in the normal version of In the Flesh, is real size, but there I wanted to show it much enlarged. A size 4 or 5 times bigger. The video must be seen from above and at Paradiso there is a balcony perfect for a suspended vision, that can be enjoyed by one hundred people about. In short, during projection, looking down you saw a person so huge that it was incredible, even more incredible when compared with the size of people who walked around the perimeter projection.

After this experience I started working on Ghosts, but not having a large white wall for testing, I used the ceiling. The result was really interesting, and so The Revery Alone, which is the other work that I have shown in Turin, was born. The Revery Alone (2008) begins by trying to limit the choreography. The limitations are something I really appreciate especially when I work on live choreographies. I always thought that they would help to build the work. Limitations in the use of body space.The dancer could move only within the established boundaries, in In the Flesh. So, in The Revery a dancer explores the limitations imposed on the choreography in a lyrical and meditative realization that amplifies the sculptural dimension of the installation that the viewer can feel relaxed with eyes to the ceiling. 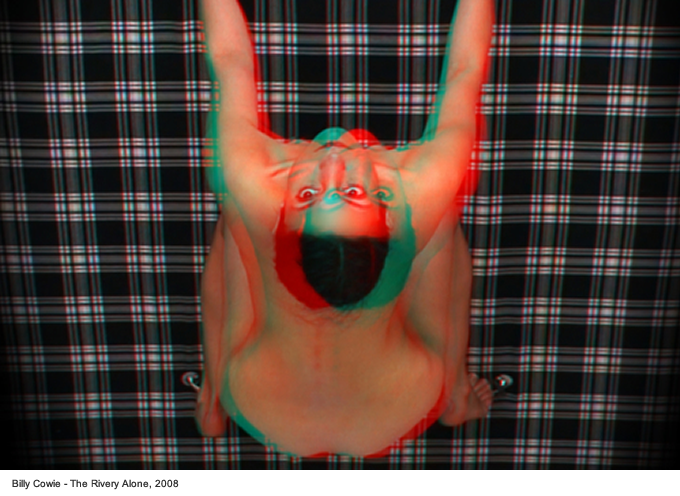 Silvia Scaravaggi:Why do you aim to make the body to be felt, out of its two-dimensional state, almost touchable?

Billy Cowie: I think it is something very intimate. I always study small movements in choreographies. I like way personality is revealed, the dancers become known, they are not anonymous. It is a way to try to explain exactly who they really are. This is also why I like to use the lyrics: in most of my works the dancers speak, reciting lyrics and poems.

Silvia Scaravaggi: As it constantly happens in Ghosts in the Machine (2009). Is that the last work you realized?

Billy Cowie: No, the latest project is Tango de Soledad (2010), a single dance work for large space with the dancer Amy Hollingsworth. It exists in two versions, a 3D version, using the same In The Flesh technology to make solid body, and a conventional projection. With Ghosts in the Machine I wanted to create a work that was a bit like Men in the Wall. Instead of having four men in four square, here there are three girls out of their three frames.

I auditioned many dancers before choosing the main characters of the video. I wanted they had a strong characters, that were very natural. Not actresses, not professional dancers, someone special as the three girls that I found. They are very different, they seem friends. I worked again with limitations: I wanted it was perceived that they were not professional dancers, using this impression to show that they actually want to be. They try so much in their life and in artistic research that definitely they think to be real dancers.

I also tried to create a matching game with Men in the Wall: At the beginning of the Ghosts in the Machine video the girls said they saw four boys. In Men in the Wall, one of the guys talking with another, says that he saw some ghosts with blue and red eyes. And again, the boy says he was approached by a ghost and he tried to touch her, making her flee. InGhosts in the Machineas well, a girl says that one of the four boys tried to touch her and she ran away. All this to bring out that there are two worlds, two universes, one real and one alternate, imaginary, virtual. Two dimensions to meet, to compare, two worlds coming into relation in which something happens. 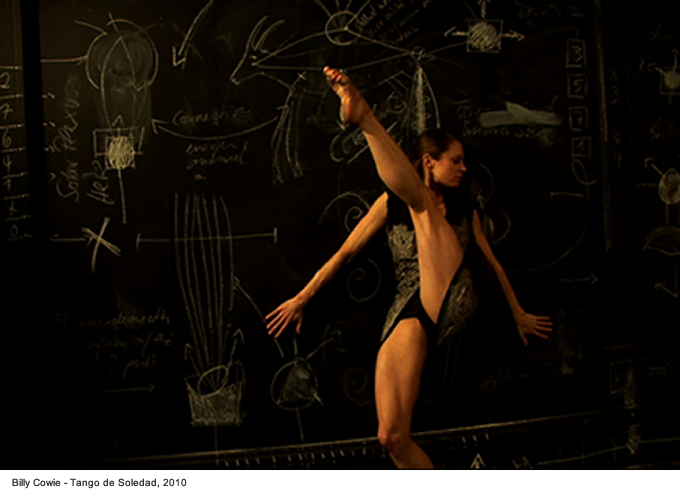 Silvia Scaravaggi: During Ghosts in the Machine, one of the performers utters “The medium is the message”, citing Marhsall McLuhan. Is that the philosophy on which your work is based?

Billy Cowie: No, actually not. For me the message is the message. What is interesting to me is not the medium, but the content: make films, works, where it’s important what happens. I am interested to make my works intellectual, inputting cultural references, quotations, references. For example, the title Ghosts in the Machine is borrowed from the philosopher Gilbert Ryle (1) who invented this phrase as opposed to the idea that body and mind are separate things. It happened that many others had used this expression, including the Police as the title for one of their records.

Silvia Scaravaggi: One last short question: do you always use original compositions for your soundtracks?

Billy Cowie: Yes absolutely, from shooting to sound I take care of everything. I am a control freak.

(1) From Wikipedia: Gilbert Ryle (19 August 1900, Brighton – 6 October 1976, Oxford), was a British philosopher, and a representative of the generation of British ordinary language philosophers that shared Wittgenstein’s approach to philosophical problems,[1] and is principally known for his critique of Cartesian dualism, for which he coined the phrase “the ghost in the machine”. Some of his ideas in the philosophy of mind have been referred to as “behaviourist” (not to be confused with the psychological behaviourism of B. F. Skinner and John B. Watson). Ryle’s best known book is The Concept of Mind (1949), in which he writes that the “general trend of this book will undoubtedly, and harmlessly, be stigmatised as ‘behaviourist’.”[2] Ryle, having engaged in detailed study of the key works of Bernard Bolzano, Franz Brentano, Alexius Meinong, Husserl, and Heidegger, himself suggested instead that the book “could be described as a sustained essay in phenomenology, if you are at home with that label.”