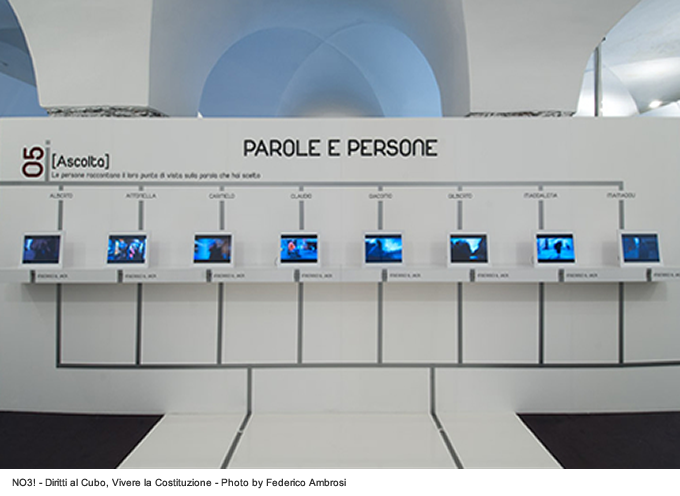 Paolo Ranieri of N03! talks about his artistic support to interactive museums dedicated to History. From the Museo Diffuso della Resistenza (the Widespread Museum of Resistance) in Turin to the Museum of Fosdinovo (Sarzana  SP) opened on June 3rd, 2000 and the most recent Diritti al cubo/Living the Constitution (Genoa and Turin).

He has also contributed to the touching exhibition on Primo Levi A noi fu dato in sorte questo tempo at the former Campo Fossoli of Carpi (Modena) and to a permanent installation at the Musée de la Résistance et de la Déportation de l’Isère Maison des Droits de l’Homme, Grenoble, entitled Résister Aujourd’hui. He has done all this in memory of his lately gone grandfather (mayor of Sarzana for 25 years), who was an anti-fascist and member of the clandestine Communist Party that played a key role in the liberation of Sarzana.

Paolo Ranieri, a leading light of N03!’s multimedia activity, video director and teacher at the Academy of Fine Arts in Carrara, bears an important surname: his grandfather Paolino Ranieri, who died on the tenth anniversary of the Audiovisive Museum of Resistance, was one of the organizers of resistance in Lunigiana. The museum was a big desire of Paolino when he was alive, and it was designed and built by Studio Azzurro in collaboration with Paolo Ranieri. 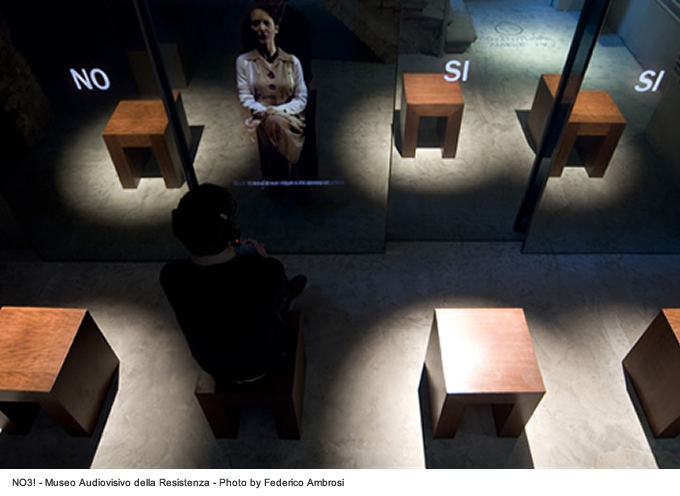 The Museum of Resistance is one of the first examples of interactive museums to catch the attention of the administrations in projecting multimedia installations. The remembrance of Resistance is finely displayed through faces, words, places, accounts and events of the Great History along with everyday life of farming villages between Liguria and Tuscany. A touching creation and an amazing work from a historical point of view.

Interactivity relates back to the gestures of remembrance: flipping the pages of photograph albums or newspapers, listening to the accounts of old people who lived during the war and fought for the Republic and the Constitution. The Museum was not positioned by chance  it is housed in a former partisan camp on the mountains. Today we would say that it is an “out-of-the-way” place, but here is where Resistance took place, and it’s worth driving out of the built-up areas to discover the heart of Italian history. A lively place hosting events and concerts. It is a must-visit place.

For the tenth anniversary of the Audiovisive Museum of Resistance I talked with Paolo Ranieri about the support of new technologies in designing a museum whose subjects are history and collective memory.

Annamaria Monteverdi: What about your training and profession in the fields of video making and interactive art?

Paolo Ranieri:My training started in 1992, when I was attending a TV production course in Genoa. Afterwards, I moved to Milan and got in contact with Studio Azzurro, whose creations really enraptured me. I started as Paolo Rosa’s assistant director for some installations and I also worked on editing; I made some documentaries  e. g. a documentary about Arturo Schwartz and Joseph Beuys for the Mudima’s collection. I have also made three documentaries about contemporary art for Regione Lombardia, among which Il corpo dell’arte  a documentary on body art realized in collaboration with Andrea Lissoni. I have always loved directing and, in particular, directing documentaries. From 1998, such passion led me to work for the Museum of Resistance in Sarzana which opened on June 3rd, 2000. 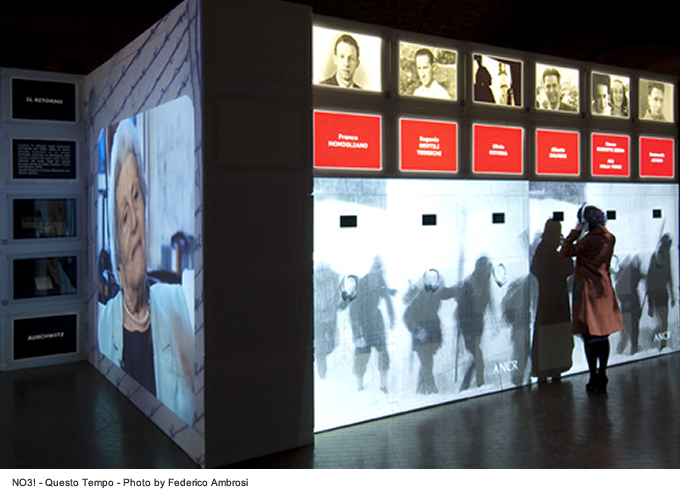 Annamaria Monteverdi: What was your task at the Museum of Resistance?

Paolo Ranieri: I had several tasks  the installation in general, the concept, the contents, the materials and the direction of video installations. My grandfather intended to create a museum of Resistance in order to leave a tangible sign of memory; he realized the uselessness to create a “traditional” museum. He was deeply impressed by some sentences he read in an article by Umberto Eco.

The article read that museums must be alive and display accounts, music and images; he had cut out the article and always kept it in his pocket. That was his idea of museum; I told him that creating such installations was exactly my job. I brought him to visit the Museum of Studio Azzurro in Lucca, the Baluardo of San Paolino and an exhibition dedicated to Studio Azzurro at Palazzo delle Esposizioni in Rome. In that moment he recognized that a mix between video and interactivity could fit his idea of museum of resistance. My grandfather and I involved Studio Azzurro in the project.

That was how the project of the Museum of Resistance took place; two historians, Francesca Perini and Paolo Pezzino, have been involved too; they took care of the contents and had the idea to project interviews, faces and witnesses on the screen. We choose the subjects: country life, massacres, resistance, deportation, women. Then, we found the witnesses and started doing the interviews that would be projected one next to the other. Below the faces were the books, above which images were projected. Above all, the way emotions are shown is impressive  you can make the close-up faces play by your hand and make them tell you history.

Paolo Ranieri: N03 started up in 2003 as a video and multimedia studio; it is made up of me, Riccardo Castaldi, Valentina De Marchi, Elisa Mendini, Fanny Molteni, Cinzia Rizzo, Franco Rolla, Martina Sgalippa and Davide Sgalippa. Orf Quarenghi is one of the most regular contributors. N03 is an image research centre and its main task is to design interactive and immersive video environments. For example, with Genova del Saper Fare (2004) we approached the subjects of work and new technologies; among others, we have realized the Martinitt e Stelline Museum of Milan, a multimedia route about everyday life of children in two orphanages of the 19th century in Milan.

Among the interactive installations, we realized the Colombo/Colòn, dedicated to Cristoforo Colombo for the Complesso Monumentale di Sant’Ignazio  Genoa State Archives  and the interactive exhibition Rossa. Immagine e comunicazione del lavoro 1848-2007 for the Science Centre of Naples. 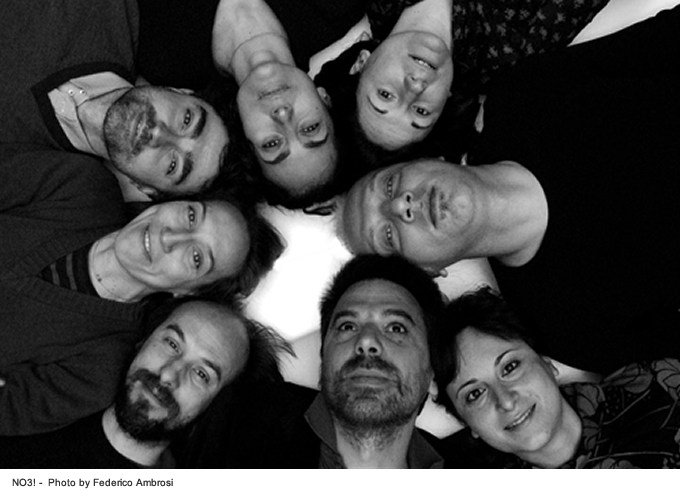 Annamaria Monteverdi: In addition to the Fosdinovo Museum of Resistance, what’s the interactive exhibition you hold dearest, or you have dedicated yourself most?

Paolo Ranieri: The exhibition I have dedicated myself most is the Museo della Torino in Guerra 38-48 (Museum of Resistance). It is a historical journey in Turin during the war  from 1938 to 1948  say, from the racial laws to the Constitution. The exhibition was displayed in the basement premises of the “Widespread” Museum and the Historical Institute of Resistance in Turin. It is made up of various spaces (little rooms and niches inside a former air-raid shelter) with specific historical meanings.

We have left the shelter untouched. Visitors can use headphones to hear bombings and voices of the refugees during air raids. The rest has been realized interlinking some historical subjects: Turin everyday life under the bombings, under the fascist regime and the German occupation and the liberation. We used a series of town’s places as symbols, and the concept of the exhibition was “subway of remembrance”  the subway lines stop at the places we have chosen. Each of the 5 subjects is told in a little space by a big projection and a couple of eye-witness accounts that converge on an interactive table where several documents are placed. We had a huge heritage of documents to bring back to life: this happens through blank documents activated by the visitor.

Mirrors represent another nice cinematographic element. We display the eye-witness accounts on screens, and before each of them we have placed a semitransparent mirror. In this way, visitors can “mirror” in the eye-witnesses. The last “stop” of the museum is a permanent display on the Constitution, with four big mirrors and some seats  as the visitor sits down an actor starts acting comments on the Constitution. We liked realizing it and working with the Institute for the History of the Resistance. It represents a good example of cooperation between artists making creative multimedia installations and historians. 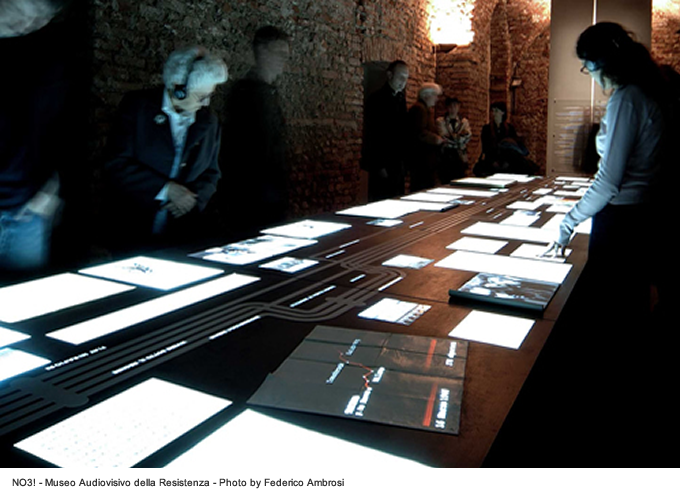 Annamaria Monteverdi: And what about the idea of an exhibition on the Constitution and the project Living the Constitution, displayed from July 2nd to December 19th, 2010 at the “Widespread” Museum of Turin, whose successful preview has been displayed at Palazzo Ducale in Genoa (strongly wanted by the director Luca Borzani)?

Paolo Ranieri: This exhibition is part of a wider project started with the permanent exhibition Turin 1938-1948. From the Racial Laws to the Constitution and completes the previous exhibition I giovani e la Costituzione housed at the Museum from April 3rd to June 21st, 2009 with the participation of many middle school and high school students from Piedmont. The first room represents the result of the workshops done in the schools of Turin with a scientific committee made up of experts of history, some jurists and a storyteller.

Annamaria Monteverdi: Can you tell us something about Living the Constitution?

Paolo Ranieri: The temporary exhibition Diritti al Cubo  Living the Constitution, which was hosted in Genoa and is now back in Turin for the permanent exhibition at the “Widespread” Museum, is based on the personal choice of the visitor. The choices about the routes are recorded. I/YOU/WE are staging posts of the route, in order to show the society as a system in which everybody’s interest can coexist. The visitors can compare their own opinion with other people’s point of view. Turin and Genoa are both trying to face today’s economic and social changes. It makes them a good laboratory for such experimentation done with young and adult people. 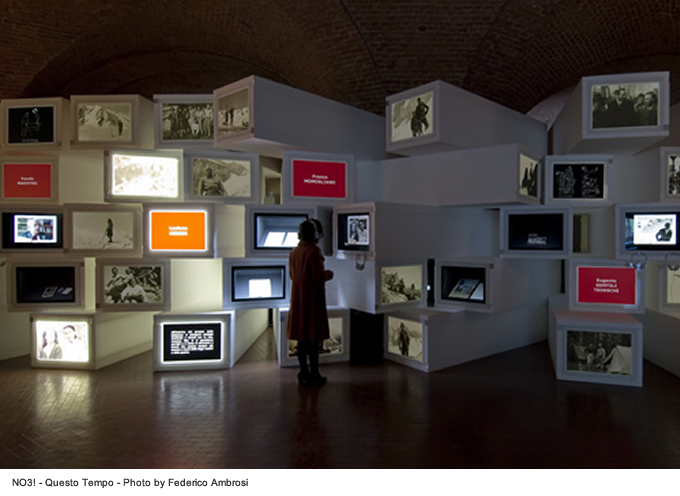 Annamaria Monteverdi: How does the interactive route take place?

Paolo Ranieri:Headphones, a plug and a RFID system are distributed. At the beginning of the route the visitor has to choose among 6 key words of democracy (freedom, equality, safety, work, vote, constitution). Such words will define his/her route. Using the plug, the visitor can leave a track of himself/herself. Before the visitor there is a glossary firmly linked to the principles and values of democracy but ever evolving too, just like social needs are. In the first room 6 screens project actors talking charmingly about those 6 words and the Constitution.

At the first stage of the route, visitors make their choice individually. Afterwards, they identify themselves with someone else making choices for 8 “standard” people we have previously selected and interviewed in Genoa; they talk about themselves, their political ideas and problems. In this room visitors find a screen for each “standard” person. Using the plug with the word chosen at the beginning, the visitor can listen to the “standard” people talking about that very word.

At the third interactive stage, the visitor makes his/her choice for a community  the “WE” stage. Then, we download the data collected. The screen displays the most selected words on a real-time updating chart. At last, visitors can listen to men and women confidently speaking of the inviolable rights of the human being and principles of the Constitution during the early years of the Republic: voting right, equality, education, freedom, denying war and state violence were values highly paid by our forefathers. Statements and accounts far away in time accompanied with recent reflections: it all reminds us the value of those laws and principles.